I don't really use chapstick much.  When we were in Glacier in the wind and sun all day for a week I did.   Sometimes in the depth of winter when the air is so dry I do, but I wouldn't say it is an item which I use on a weekly--let alone daily--basis.  My lips just seem to maintain a good moisture on their own barring extreme circumstances.   I actually think its one of those things that once you start using you're hooked.  But, that's just me.  Matt, on the other hand, is a daily chapstick user.  He is, in general, bothered more by dry, chapped skin than I am.  In winter his hands and nose regularly crack and split.  His lips can often get all red and sore looking.  Makes me feel lucky that I don't have those moisture issues to contend with.

When we were in Glacier Matt chapstick tube ran empty and so he commandeered mine since its not like I use it all that much anyways.  In doing so we realized that I had been using the same tube for more than nine months!  Given that its a little .15 ounce tube I thought that was quite a long time.  And so while we were out in the woods, far from home, I decided that when I got back I was going to learn how to make my own chapstick.   I'd been saving Matt's empty tubes and thought I finally had enough to make a batch.  And so I did.

I'd read about it in the book, Making It: Radical Home Ec for a Post-Consumer World.  This is a totally awesome book, by the way, just in case you haven't checked out a copy.  Its got homemade projects from DIY "Altoids" and condiments to bar soap and salves to building a compost bin from shipping pallets (which my sister, Lisa, did after she checked out the book) and building a chicken coop to making your own vinegar or solar cooker.  Its got a little something for every level of make-it-yourselfer.  I highly, highly recommend it.  Plus, Eric and Kelly are hilarious.  Theirs was one of the first blogs I ever started to read.

The chapstick recipe, if you want to call it that, is so darn simple I can't believe I've had the book this long and never tried it before.  Its just a teeny-tiny bit of bee's wax (1.5 tsp) and olive oil (2 T), heated through, and poured into containers.

I bought a small chunk of bee's wax from a local apiary.  The olive oil is decidedly not local, but oh well, neither were the oils in our store bought chapsticks.  I am super keen on the idea of reusing chapstick containers instead of pitching them every time.  The bee's wax cost $3 and will be enough to make more batches than I can even imagine--I filled 7+ tubes with only 1 1/2 teaspoons worth of wax.  Since a tube of chapstick (that doesn't contain petroleum and other stuff I don't want to rub into my skin) can cost that much for one single tube this seems like a really good money saving venture--particularly given Matt's affinity for his chapstick.

So far the stuff has really held up, too.  We had it packed in a 100+ degrees F car for several days while camping and it never remelted--Matt's biggest concern.  It stayed firm and usable throughout the trip.  It has a nice, smooth texture without feeling oily.  It is not nearly so olive green as I feared it might be (we have an olive oil based soap right now the green color of which I find sort of off-putting.)  I like that it has no added scent or flavor, thought I might play around with that at some point.  I can see endless variations being possible. 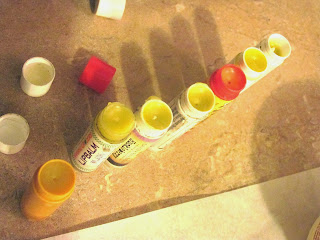