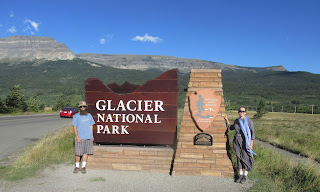 On the fourth day of our stay in Glacier we finally drove some of the Going-to-the-Sun Road, one of the most scenic highways in America.  I must say, after hiking and enjoying the enormous, astounding beauty of the mountains from the trails--on my own two feet--I was underwhelmed by the road.  Sure, it is stunning.  There is no argument about that.  Stunning.  Gorgeous.  And freaky as all get out.  I don't know...hiking on a trail with a steep, deadly drop-off is one thing.  Riding in a car along a steep, deadly drop-off is another.  I much, much prefer the former.  So, yeah, I was not as awestruck as I might have thought about the Going-to-the-Sun Road.  But, none the less, I am glad to have had the experience.
Along the Going-to-the-Sun we did stop at a couple cool mini-hikes--Wild Goose Island, The Sunrift Gorge and St. Mary's Waterfall.  That gorge was amazing.  It was such a small, steep, tall corridor through the rocks.  It is extra noteworthy because the gorge is a natural break in the rocks instead of a canyon carved by erosion.  Baring Creek rushes through the gap in awesome little cascades. 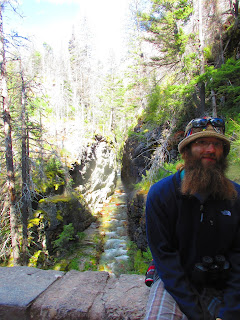 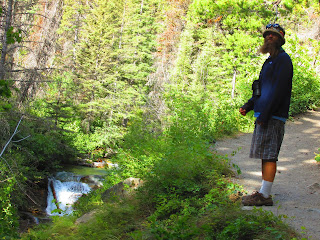 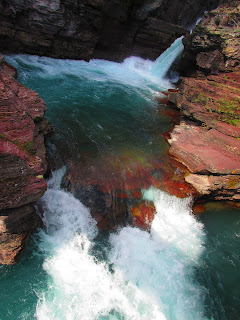 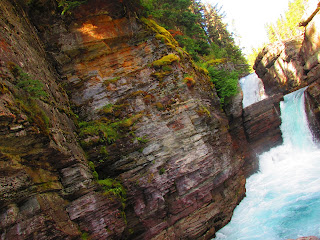 We also passed by 492 foot tall Bird Woman Falls and saw the distant Triple Divide Peak--a mountain peak where off of which water flows into three different water systems ending up in the Pacific Ocean, Hudson Bay, and the Gulf of Mexico.  How spectacular is that?! 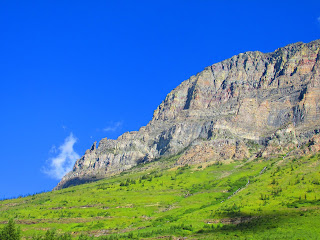 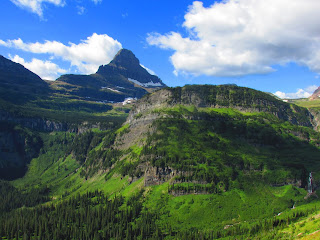 We pulled into the Avalanche campground around noon and found a site.  I was feeling quite famished and grouchy so we immediately started stuffing cold pizza in our mouths.  We'd made plans to try to meet up with one of Matt's old friends (who grew up in the house across the street).  We'd set a three hour time window to wait for each other at the campground.  Matt and I had only been there probably five or ten minutes when Kjell showed up.  We were still stuffing pizza in our faces.  It was perfect timing.  (And made me gleeful that it was so easy to arrange without any cellphones whatsoever.  We just has prearranged plans.  What a concept!)  It worked out flawlessly finding each other.

We set up camp, had a early-afternoon-we're-on-vacation beer, and then decided to head out on a hike to Avalanche Lake.

The trail was through the woods and nice a cool in the afternoon.  It followed along Avalanche Creek for a good distance.  The way the water has carved through the place was pretty remarkable.  We saw a family of mountain chickadees perched on a limb over the trail.  The babies were loud and that is was brought the family to our attention.  The chicks were just tiny little balls of fluff, nearly piled up on top of each other on the branch.  The adult was busy keeping them all fed.  It was quite a treat to get to watch them for a while. 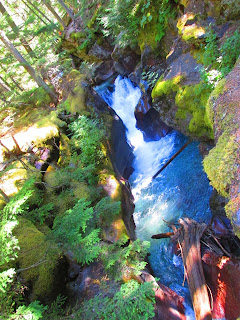 The hike to Avalanche Lake is pretty popular.  Its flat and easy.  Its only 2.3 miles to get to the foot of the lake and only 3.1 to get to the head of it.  And, of course, it is beautiful as all get out. 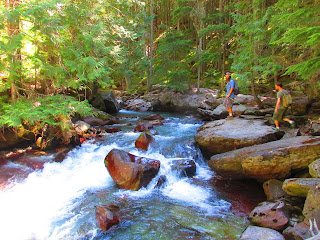 When we emerged onto the beach surrounding the lake I think we were all a little amazed.  The water was so amazing in it color and clarity.  Waterfalls ran down the tall mountains around us--we spotted one at first, then another, and another, and another.
The beach right near the trail at the foot of the lake was occupied by a dozen people or so and so we opted to walk a little further along the trail.  The beach on the far side of the lake was empty of people and so we found a nice spot to sit right near an inlet that was rushing into the lake with ice cold water.  We soaked our feet.  I considered a swim, but just waded a bit instead. 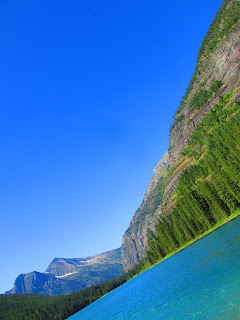 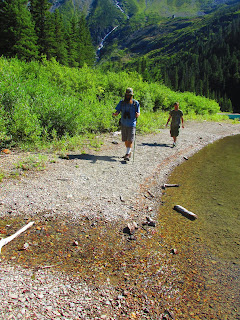 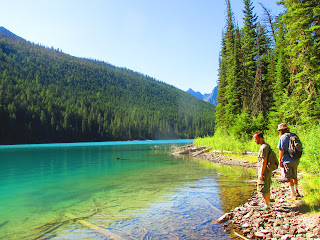 Along the way we saw all sorts of interesting things--whole trees downed by avalanches submerged in the crystal clear water, piles of droppings which we believed belongs to bears, the foot prints of long legged wading birds clearly visible in the muddy lake bottom, thimbleberries and raspberries.  There was also a berry that looked similar to a huckleberry, but that tasted like poison.  Matt, in a moment of generosity, gave the few he'd found to Kjell and I--not realizing they'd been misidentified, of course.  Boy, did we spit those out in a hurry!  We tried to rid ourselves of the horrible taste with thimbleberries.
As we were nearing the end of our lake circumnavigation we ran into a German fellow coming the opposite way.  He told us that he'd walked around the lake with his daughters, but had been unable to get all the way around because of the outlet stream.  There was a fallen log his daughters had used as a foot bridge, but he'd been to big for it.  He'd tried to wade across, but his feet were sucked into the boggy mud up past his ankles.  So, he'd turned back.  In our wildly optimistic way we just continued on, hoping we'd have different luck in crossing back at the foot of the lake. 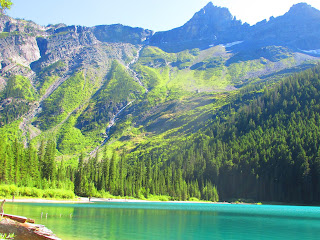 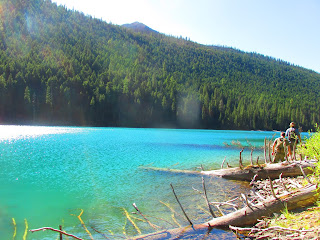 We tried the fallen log, but I was skeptical of my ability to not fall into the water below.  I wouldn't have really cared other than that I had my camera on me.  So, we bushwhacked our way further down the shoreline until we found a place where the stream bed was stones instead of mud.  We forded with no difficulty, though Matt did cut his foot pretty deeply.  He didn't notice until later though because the water was so very cold.

A beautiful stellars jay captivated me for a long while as we sat on a jumble of fallen logs backed up at the foot of the lake.  They're so pretty.  And noisy.  The beauty provided good entertainment while we waited for our feet to dry so we could slip our boots back on. 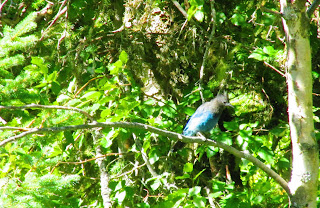 On the way back from the lake we took a little side-trip through the Trail of the Cedars.  The Trail of the Cedars is a nice boardwalk stroll and a great way to end the hiking day.  Matt and I had seen western red cedars on our Furthur Megavacation a few year back.  Even still, they are so impressive and majestic every time I get the chance to lay eyes on them.  They are the redwoods of Montana.  Almost equally impressive though were the black cottonwood trees.  Both species are all so darn big that it seems unreal!    Some of those trees have been growing since Mozart was still performing.  But, more on that in the post for day five.

We then returned to camp for dinner and merriment around the campfire.  We talked lots and lots since we had a lot of catching up to do with Kjell.  Matt and I sang and strummed the guitar.  We shared some beers and lots of laughter. 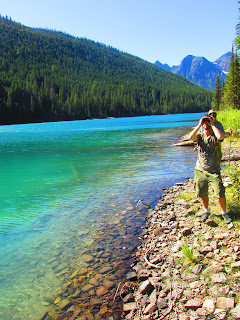 Leave it to us to turn a family-friendly stroll into an all day adventure involving bushwhacking and stream fording.  But, boy, what a fun day we had!
By BLD in MT