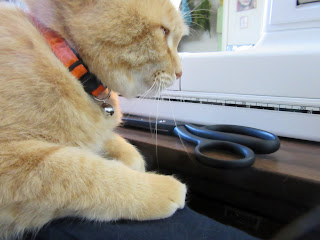 Ginger and I have found a new way to spend time together--sewing.  Well, she doesn't exactly sew, but she does keep me company while I sew.  This makes an already enjoyable activity even more so! 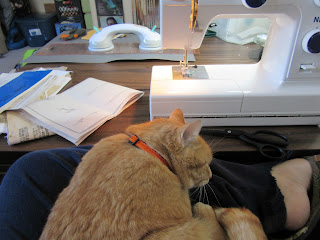 Ginger now curls up on my lap while I sew--or on the sewing table if I am, say, ironing or cutting things out on the floor.  It is so darn nice.  Oh, how it fills my heart with happiness.  Ginger is not exactly a cuddly cat.  Playful, yes.  Cuddly, no.  She rarely seeks me out to crawl up in my lap.  This makes the newly found past time a really treat for me.  We're averaging a couple times a week and I adore every sweetly curled and purring moment. 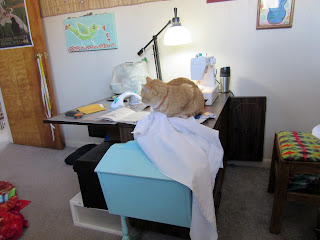 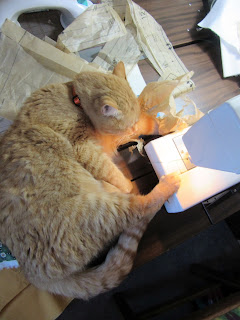 Well, there was that day she started shredding the pattern pieces for the apron I was working on.  I had to put the kibosh on that and gave her a new pattern of her own so she'd leave mine be!  She loves shredding paper. 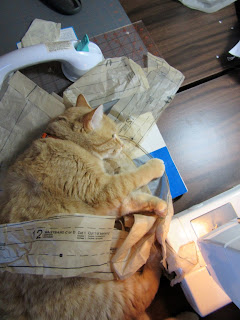 I think I have Johnny to thank for my new-found sewing buddy.  See, we're in the process of adopting a new cat--Johnny--from a friend who couldn't keep her anymore.  It has sort of turned Ginger's world upside down.  Johnny loved our house, us, and Ginger from the get-go.  Ginger was not impressed and was quite resentful of Johnny's presence.  I've never before seen such malevolence in her beautiful eyes.  For a while they had me thinking, "What have a I done..." 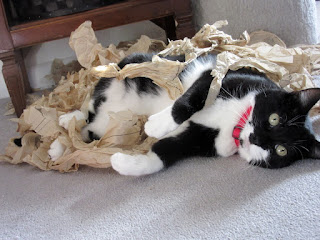 Its changed the household dynamic for sure, but hopefully in a way that, in the end, will be positive.  Ginger really is coming around, recently letting Johnny lick her on the face once even!  (Though Ginger did flee afterward, giving Johnny a "What was that about?!" sort of look.)  I think she is having to learn that other cats can actually be cool.  She's never known another cat, so far as I know.  They're working it out.  I hope Ginger gives us the green light.  Matt and I both like Johnny a lot, but Ginger gets the final say.  It will take time, but as long as progress is being made I am willing to keep trying. 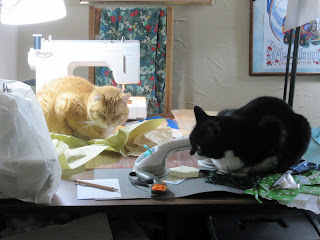 I think all the uncertainty has made my sweet little scardy cat want to be in physical contact with me more though.  I am her calm and adoring protector.  I helped her get past Johnny on the stairs (the bottleneck of our house).  I let her outside when she's had enough of that other cat following her around the house. I hope she doesn't start ditching me if she and Johnny become best friends.  I've grown used to her on my lap at the sewing machine already. 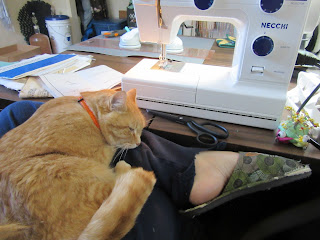 (and I am still surprised that my jumps-when-Matt-sneezes-terrified-of-the-vacuum-cleaner kitty doesn't mind being right next to my noisy, ol' sewing machine.) 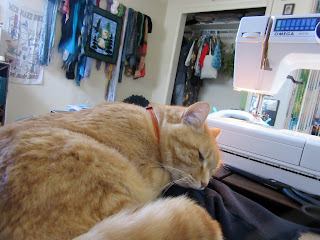