Palo Santo for the Potty

Johnny is drawn to the smell of Palo Santo like a moth to a flame.   It cracks me up.  When we light it, releasing its deep, resinous scent, Johnny just comes a-runnin'.  She'll stand on the bath mat and look around, sniffing deeply and begging to be petted.  I assume she likes it, since she runs toward the source of the smell, but maybe she is just perplexed by it.  The aroma is pretty unique and powerful after all.  I've no way of knowing for sure, of course.

We keep a stick of Palo Santo on top of the toilet tank the way that some people do with scented candles.  See, we don't have a fan to dissipate any, well, let's say, negative bathroom odors.  That's where the Palo Santo comes in. 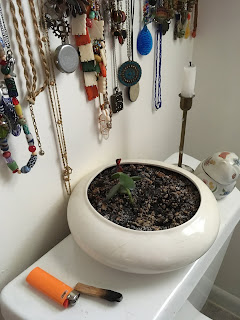 Palo Santo (or Holy Stick) is such a resinous and aromatic wood.  Just a quick touch of flame will bring the pungent oils oozing to the surface.  We don't burn our Palo Santo like incense--it doesn't catch and keep burning down to ashes.  We just run a flame over it and--boom--instantly the room smells magnificent. 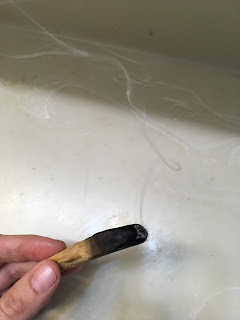 It is a pretty solid little no-bathroom-fan trick.  Safer than a candle, more earthy than air freshener, cheap, long-lasting. 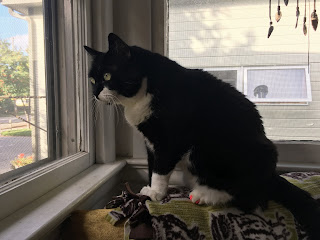