Everything wears out in its own time.  So, on the heels of my Eulogy to Outdoor Gear, I have another story.  Though this time without the lament.

I finally discarded my crusty ol' homemade wallet and transitioned to a different homemade wallet.  It is decidedly less bright and feminine, but hopefully it won't show the dirt and tea stains quite so badly.  (It is almost embarrassing how often tea gets spilled inside my bag....)

Seriously.  I put the old wallet through the ringer.
It had started to breakdown on all the fold-points (being a tri-fold wallet) last year.  I dabbed a little Fray Check (thanks, Mom!) at each of these folds and that did extend its life, I've no doubt about that.  But then the fabric itself just started to break down--not on the seams, not just on the corners.  Parts of the fabric were basically becoming invisible with each passing day, worn so thin.

And THEN, I was confronted with a stark reality.  I'd spilled so much tea inside my bag (oops!) and clutched it so much in my (apparently) grimy hands that the fabric motif was almost unrecognizable when compared with a fresh piece.  The blue had turned grey.  The brightly colored flowers and leaves had turned oh so drab.  It was pretty shocking to me, actually.  I mean...I knew my wallet was worn and dirty....but I clearly underestimated things. 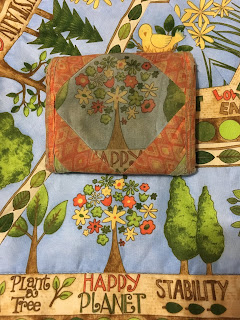 The Dark Star Orchestra wallet was originally crafted for Matt.  He wanted something extra durable so I made it out of a pair of beyond-repair Carhartt  work pants.  ...and then, after a test drive, it turned out too thick for Matt's liking.  Durable, sure, but too chunky for his back pocket.  It has been sitting on a shelf in our library/guest room ever since, saved specifically with the intention that I'd adopt it when mine wore out.  As I said back in 2016, since I almost always carry my wallet in a bag its bulk isn't an issue for me.
So, now it is has been put to use as intended.  And Hannah, lacking any sort of homemade wallet, adopted the old strained one.  This really just means I should make her a nice wallet of her own since she deserves better than that, which I'd intended for the trash.  Hey, hey, hey...I love a useful sewing project!  And the wallets are a fun and manageable little quilting endeavor.
By BLD in MT