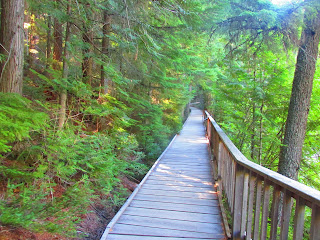 After waking early and having breakfast, we walked the Trail of the Cedars again.  Since the trail is right at the Avalanche Campground, and a mere .7 mile long loop we figured, why not?!  In the quiet of morning it seemed like an even more magical, mystical place.  Water seeps out of the rocks.  The ground is blanketed with ferns, moss, and other small green growing things.  It reminded me of my walks in the woods in Washington.  There was an amazing gorge--the Avalanche Gorge--that I somehow managed to not snap any decent photos of.  It was quite like the Sunrift Gorge in its narrow, awesomeness.  The water was so clear that Matt and I watched a fish hunting insects!  For such a short, flat, wheel-chair friendly trail it was sure a great one. 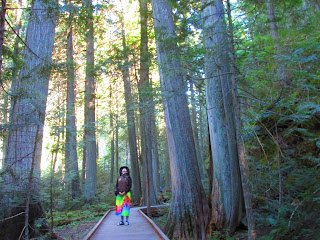 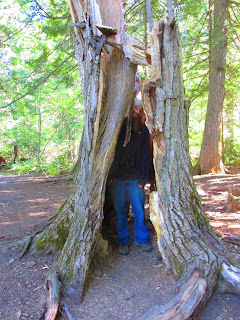 After returning  from the cedars we packed up camp and moved to the Fish Creek Campground.  After settling in at the new camp we headed out for our day's hike--a 6.8 mile round-trip stroll along MacDonald Creek along an old packer's trail with an easy 200 foot elevation gain.   As horses are permitted on most of the trail it was nice and wide and well maintained. 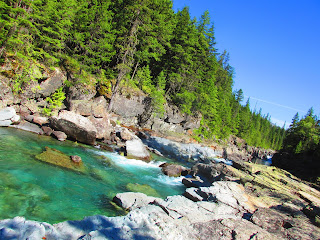 The first part of the hike was in the cool shade of a lovely mixed deciduous-coniferous forest.    It was so calm and quiet--a perfect start to a morning's hike. 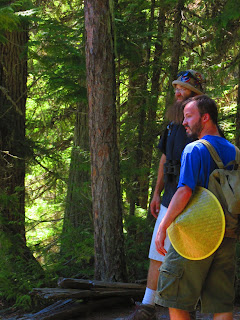 But, soon enough we were rewarded with adventures out onto the smooth, rock of the gorge along MacDonald Creek. That aquamarine water was so spectacular!   It was particularly neat because they day before we'd stopped along the road and viewed the same area, but from the opposite side of the creek.  I must say, the trail side was much better!   We got to get right out on the rocks, with the stunning jeweled waters rushing below.  Kjell pointed out fish swimming in the clear waters. 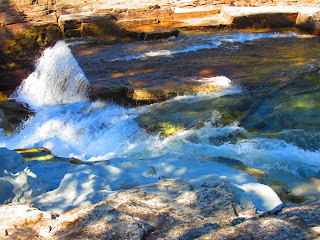 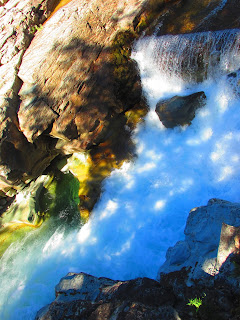 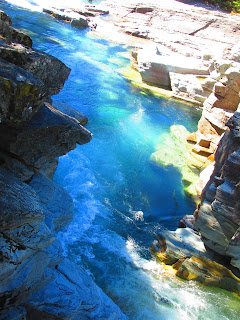 Just as I'd commented on the fact there were no flowers on this hike--as there had been so very many on all previous hikes--we stumbled upon one of the strangest looking flowers I've ever seen.  Its called a Indian Pipe and it was nearly white!  The stems were completely white though, as you can see below, the flowers do add a little color.  We later learned from our guidebook that they are a non-photosynthetic plant--hence the whiteness.  Since they do not make their own food via photosynthesis they are parasitic on surrounding plants.  How interesting is that?!  I was pretty pleased to have seen such an oddity!  Ultimately we'd also spot yellow columbines, lance leafed stone crop, common harebell, western springbeauty, mullein, and white bog orchids. 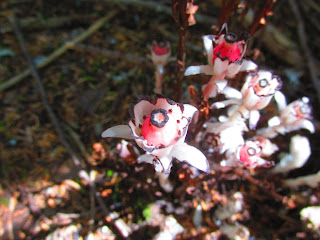 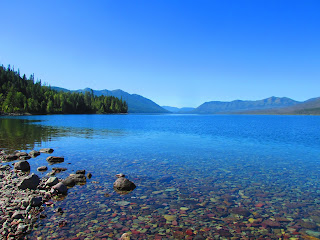 We took a short spur trail offering different views of the creek, as well as MacDonald Falls.  Portions of MacDonald Creek run across flat, slanted slabs of stone.  It was strange how flat the slabs were.  It almost looked like sections of pavement it was so flat.  Its hard to describe, but I'd never seen a river look like that before.  The water made cascades of white as the creek made its way over these stone slabs. 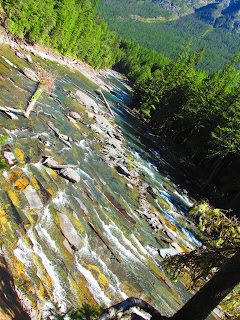 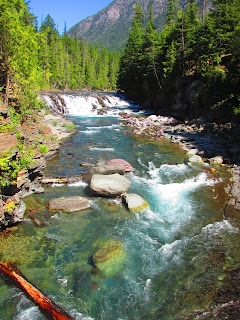 At one point the trail opened up into an amazing grove of giant red cedar and black cottonwood trees.  It was a really special spot on the trail.  It was almost like a meadow it was so open, but the forest floor was littered with river rocks instead of grass and flowers.  I'd suspect the place gets flooded in the spring.  It made the open space seem extra special.   It was strange.  There was some ground covering plants, but not as many as other portions of the forest.  In addition to crazy tall trees there was an abundance of tree-clinging fungus, too.  I love it when the trees get these little fairy platforms.   They are so neat. 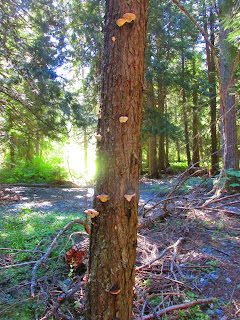 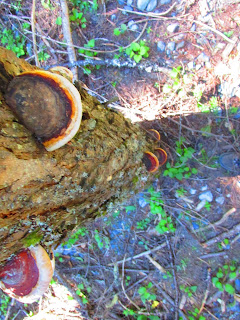 We also spotted a new-to-us species of bird--a brown creeper!  Matt even knew what it was, despite never having seen it before, because of his thorough study of our bird books over the years.   It was behaving sort of like a woodpecker as it maneuvered up the tree trunk, but it was certainly no woodpecker!  They really do creep up the side trees though.  Its not just a clever name.  Of course, in the shade of the forest I managed to snap no photos of this small, brown bird.  Oh well, we're just pleased to check another species off our list.  We also saw spotted sandpipers, dippers, and a couple great blue herons. 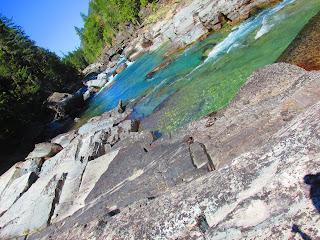 The portion of the trail open to horses ends at a shade over two miles at which point the trail became noticeably narrower and more overgrown.  But, in just under a mile the trail dead-ends on a massive  exposure of bedrock with the water tumbling and falling right beside it in the stunning upper part of gorge. 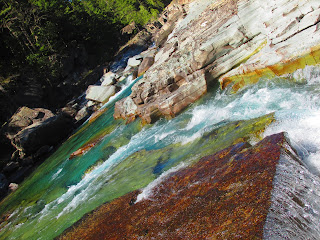 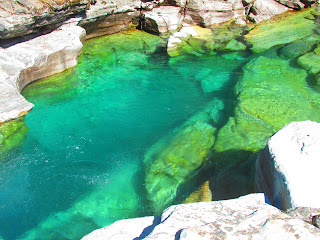 We made ourselves comfortable on the smooth stone, taking a little doze with the hypnotic roar of the water to lull us into deep relaxation.  I also wrote postcards.  Kjell read his book. 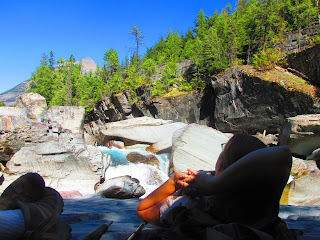 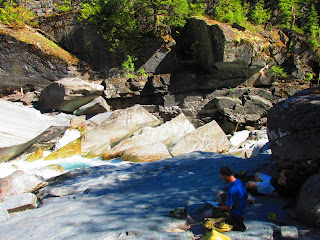 And then I awoke from my nap and decided I needed to go just a bit further--see just a little more.   I climbed atop the rocks further upstream--and oh and I glad I did.  I explored a bit before going back to tell the boys they should come along and see it themselves. 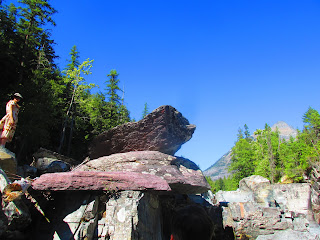 It was abundantly clear that at times of high water the creek rushes over the rocks on which we stood.  They were marked deeply with divots, holes, and craters.  The whole surface is smooth to the touch--worn satiny by the power of water.  Some of the craters still had water in them. 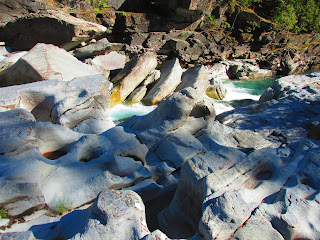 There was a shelf right on the edge of the water and numerous little bays worn into the rocks providing a place of calm a midst the rushing waters.  We soaked our feet, rejuvenating them and making them like new again.  I waded a bit in one of the backwaters, but with caution as we'd just read earlier that day that drowning is the number one cause of death in Glacier. 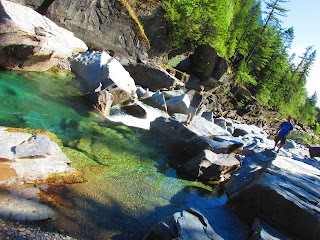 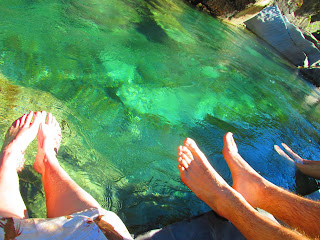 This was one of the most spectacular moments of the trip for me.  That water...oh, it was like nothing I'd ever seen before.  To sit on the ledge and watch it whirl by was...immensely magical. 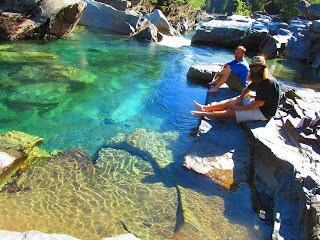 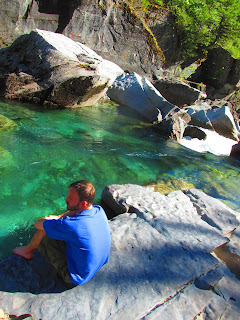 On the hike back Kjell and I opted to take a short jaunt off-trail to see what lay at the top of a hill.  In the process I lost half of my trekking pole.  We back tracked after realizing it as missing (when I went to extend the telescoping mechanism the pole was empty!) and managed to find it using a "really big boulder with moss" on it and a "big pine tree" as our landmarks.  Since that describes so many places in that forest I was quite pleased and surprised to recover it.  (Good job, Kjell!)  I'd hate to leave debris out in the woods and a trekking pole is sure handy on the steeps trails and river crossings.  I was happy it was found on a number of counts. 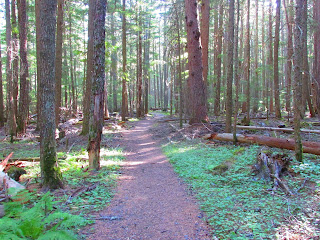 We returned to camp for dinner and merriment around the fire.  I watched the sunset over Lake MacDonald and it was breathtaking.  The color was just unbelievable, especially since it was reflected in the clear, flat surface of the water. 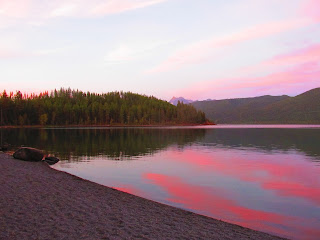 It was the night of the full moon and so the three of us walked down to the lake again after dark to enjoy the sight over the lake.  We weren't quite ambitious enough to set up the telescope as we had a few nights previous.  But, we didn't need it.  What a big moon!!  It was amazing. 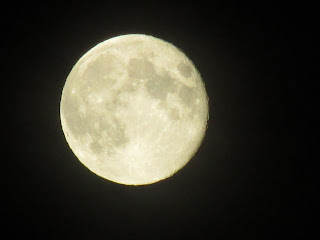 All in all I'd have to say it was perhaps the best day of vacation yet!
By BLD in MT