Its Beginning to Look.... 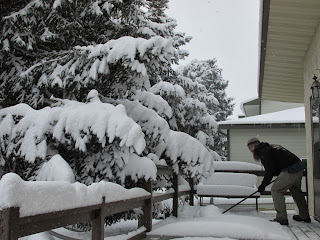 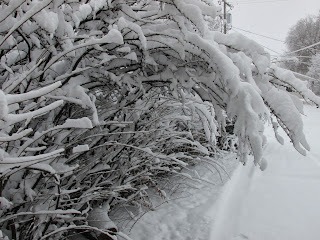 That is what Matt and I were saying as he cleared away snow from the front porch this morning (and I took photos of the snow).  We got more than six inches in the last 24 hours.  It looks so beautiful and has made me quite happy.  I rather like snow in December.  Now when it snows in October or April I might grumble, but in December--no problem.  Its winter! 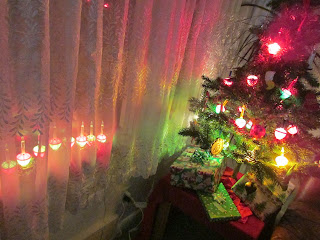 In addition to the snow making it all Christmasy we also got the tree all set up and decorated--not that it takes much.  We've got a rather small plastic tree which was one of the many things I inherited from my great-aunt when she moved.  There are probably just a couple dozen ornaments, if that, all of which are from my childhood.  And we've got three strands of bubble lights.  It is the perfect amount of decoration for me.  Small enough I don't have to store a whole big box of stuff all year, but bright and sentimental enough to launch me into Christmas cheer. 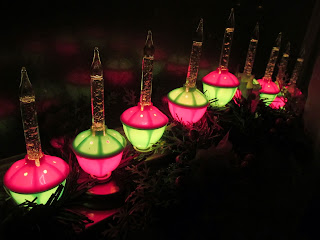 My dad dropped off some Christmas packages when he was in town a week ago.  (That is actually what prompted me to set up the tree--I had gifts to put under it.)  One from my step-mother he told us we should open it the day after Thanksgiving.  It was something we'd use through the holiday season.  So now there is an awesome new bubble light fixture in the front window, too.  Dana knows how much I appreciate bubble lights.  They're so fun and make me think of my grandmother.
Matt and I have been busy making Christmas gifts, too, but still have a few more work sessions in store before we're done.  I have a nice sense of calm about it all--which has not always been the case.  I wish I had a few albums of Christmas music though....