I had never ridden a runner sled before yesterday, at least that I recall.  And, as such, I had no idea what fun I'd been missing. 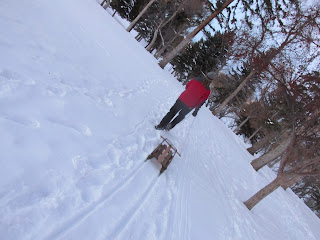 The runner sled experience is vastly, vastly superior to the plastic saucer sleds that I am used to.  The runners slice through the snow sending me flying downhill with delightful speed--even inducing me to let out a few shrieks of astonished joy.  The ability to steer prolongs the downhill glide and adds to the adventure, especially if you're the type that likes to launch off jumps built up in the snow--which Matt most certainly is.  It is also great for riding double.  Matt said he can remember when all three of the boys could ride together.
See, the runner sled belongs to Matt's folks.  Matt's dad mentioned some time ago that he'd repaired the broken wood on it--broken most likely from three boys repeatedly going off jumps.  Ever since it was brought up Matt has been dying to give it a go.  It was clearly an object associated in his memory with a jolly good time.  This recent spell of winter weather served up just the right opportunity for sledding.  The snow is thick and it is above zero on the thermometer again, too.  So, Matt picked me up after work and we went to the park.  There were several others seizing the last bit of daylight for a chance to glide down the hill.  It was splendid to sled in the purple twilight with the brilliance of the white snow reflecting the dying light.
As we returned to the car with Matt pulling the sled behind him he remarked that it was just as fun as he remembered.   It nice when that happens.  I thought it was pretty darn fun myself.
By BLD in MT