You can see Lake Yellowstone from the parking area for the Lake Overlook Trail.  It almost makes a person think, "Why do I need to hike up a hill to see the lake?  Its right there."  That may be true, but oh, the vantage point can sometimes make all the difference.  Seeing Grinnell Glacier from below was majestic.  From above breath-taking.  One made me feel like singing and skipping and dancing.  The other made me feel dizzy and overwhelmed in the sheer magnitude of nature.  I am glad to have had the experience from both vantages.
The Lake Overlook Trail is a two mile loop which departs from the West Thumb Geyser Basin area parking area.  Leaving the lot the trail passes through a small grove of trees, crosses the highway, and disappears into a short forest--regrowth from the fires of 1988.  I like these short forests.  They seem quite magical and whimsical.  Its an usual feeling to be able to look over the top of the forest, but I enjoy it.  As is the case with wildfires it is also interesting to note how some areas burned completely while others were passed over, seemingly untouched.  The trail continues through the mixed forest gradually making the way up the more open expanses of hillside.  As we climbed upwards we kept being distracted by the antics of the mountain bluebirds.  They kept hovering about four to six feet off the ground like over-sized hummingbirds as they chased insects through the air.  It was impressive.  What eye-catching little beauties they are! 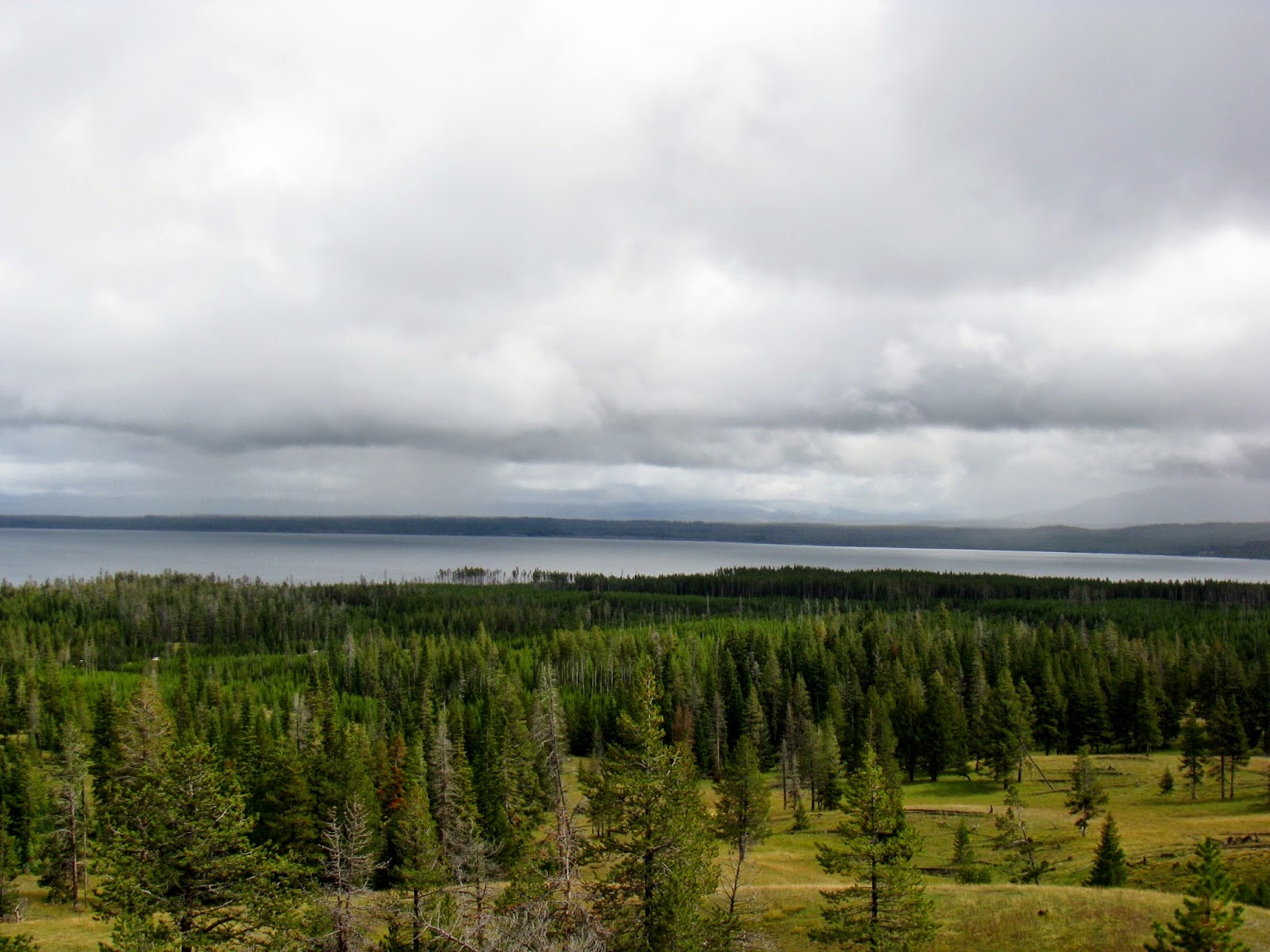 The hike, despite being an overlook, is not steep or arduous.  It is a flat meander for a while culminating in an elevation change of about 200 feet over 1/4 mile.  At the top of the hill is a rustic wooden bench for taking a rest while taking in the view.  The lake, fringed with mountains at the horizon, swept wide and flat before me as I sat on that bench.  It was windy and overcast so I had to don my jacket once again after shedding it during the assent.  The forest and hillsides below were a lovely, lush green contrast to the chill, stark greys and blues of the water and the sky. 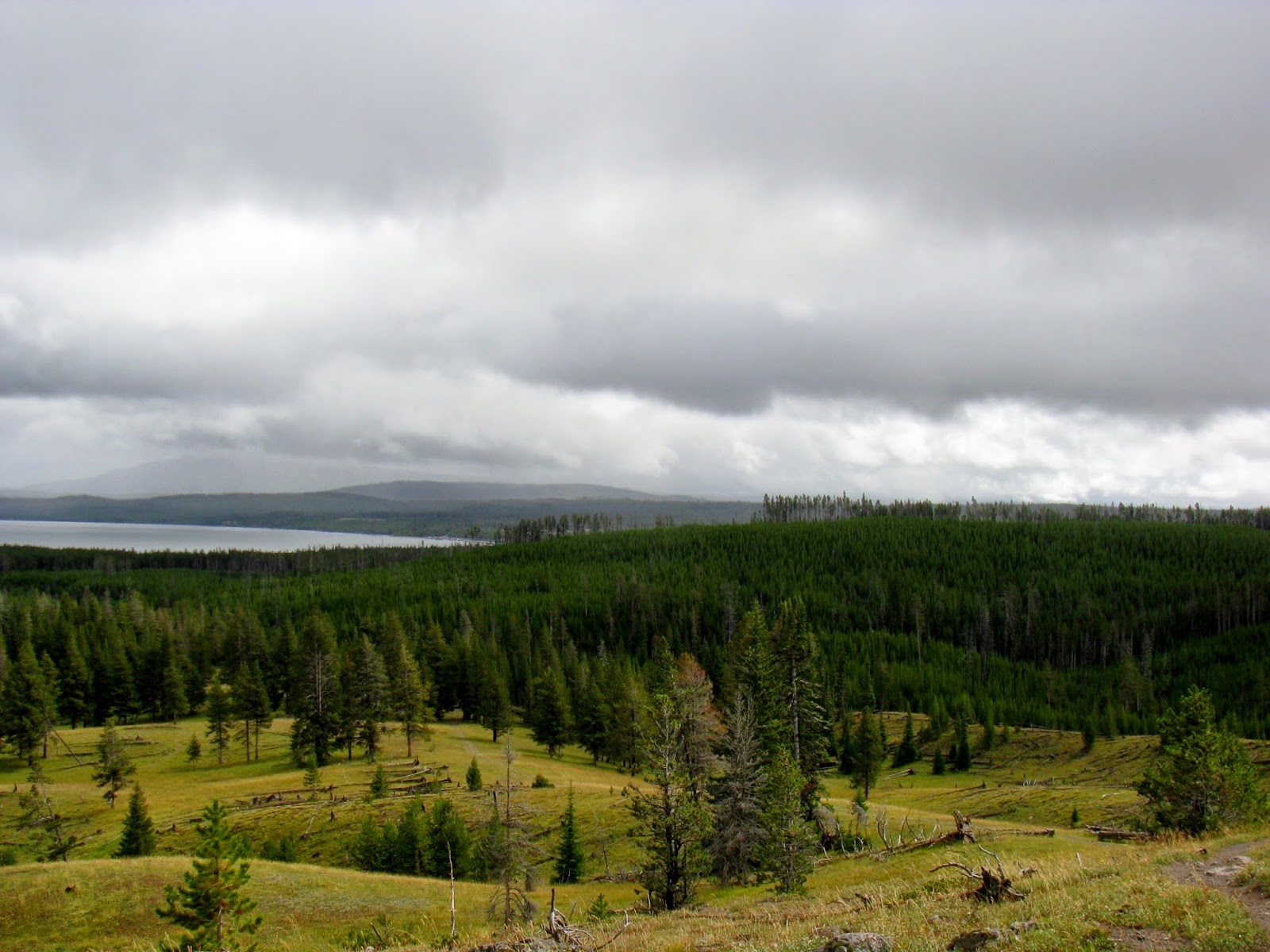 Just below the overlook is a series of small geothermal features.  We could hear them bubbling and steaming along as we took in the sights, smells, sensations, and sounds all around us.  Just like being on a mountain top, there is something about that ability to see far in every direction.  It makes me feel small and significant at the same time.  We gazed around for a good long while, watching a storm ever approaching.

We hiked back down being distracted once again by the critters we encountered.  Matt and I have a joke that if the guide books say the hike will take 2-4 hours we will not be able to do it in under four.  We must stop and poke at mushrooms, admire marmots, listen to birdsong, ponder scat.  It takes us longer, but its not as if its a race or anything.  That is part of the joy of it!  The stopping to marvel at wonders great and small, far and near. 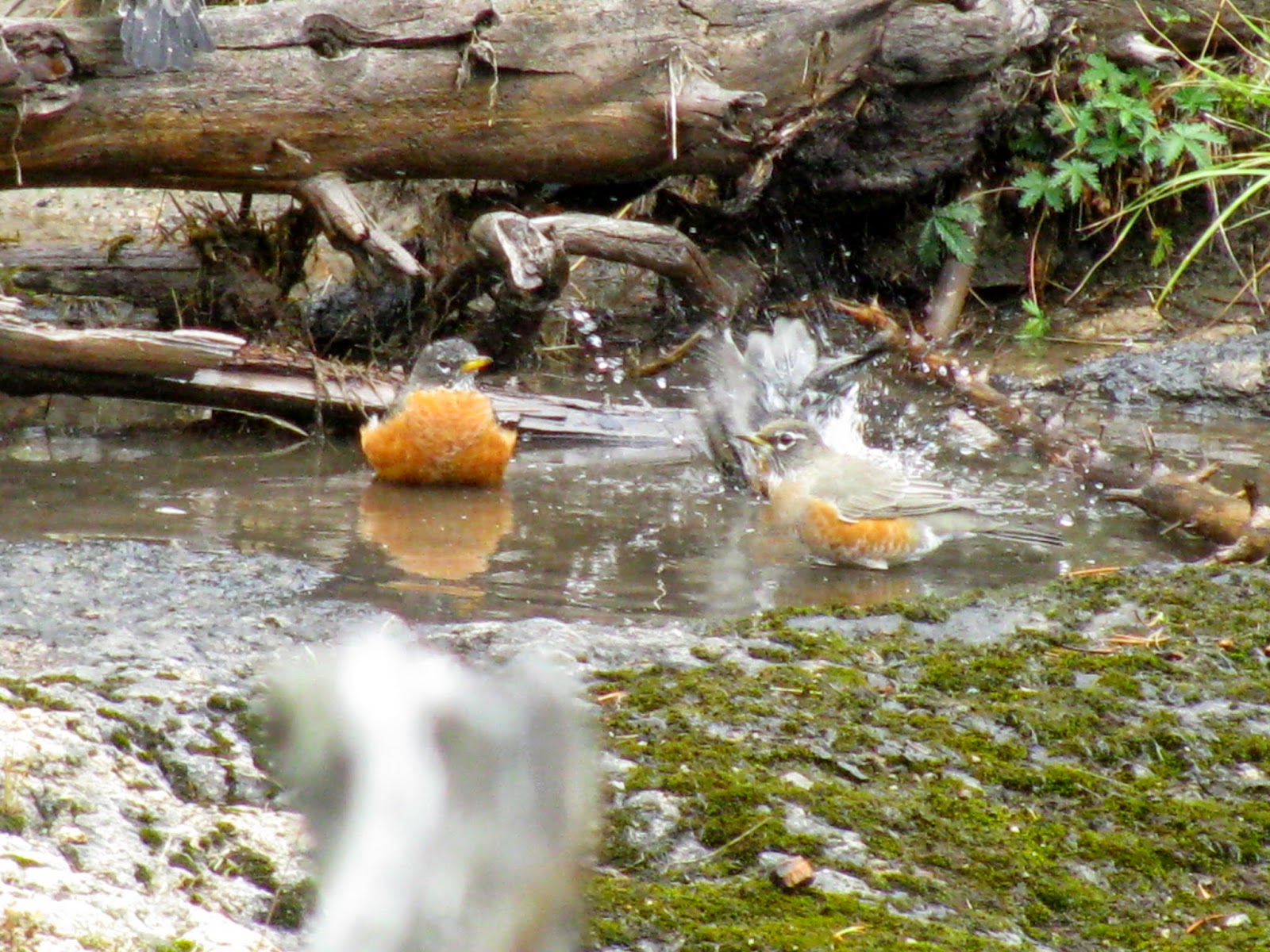 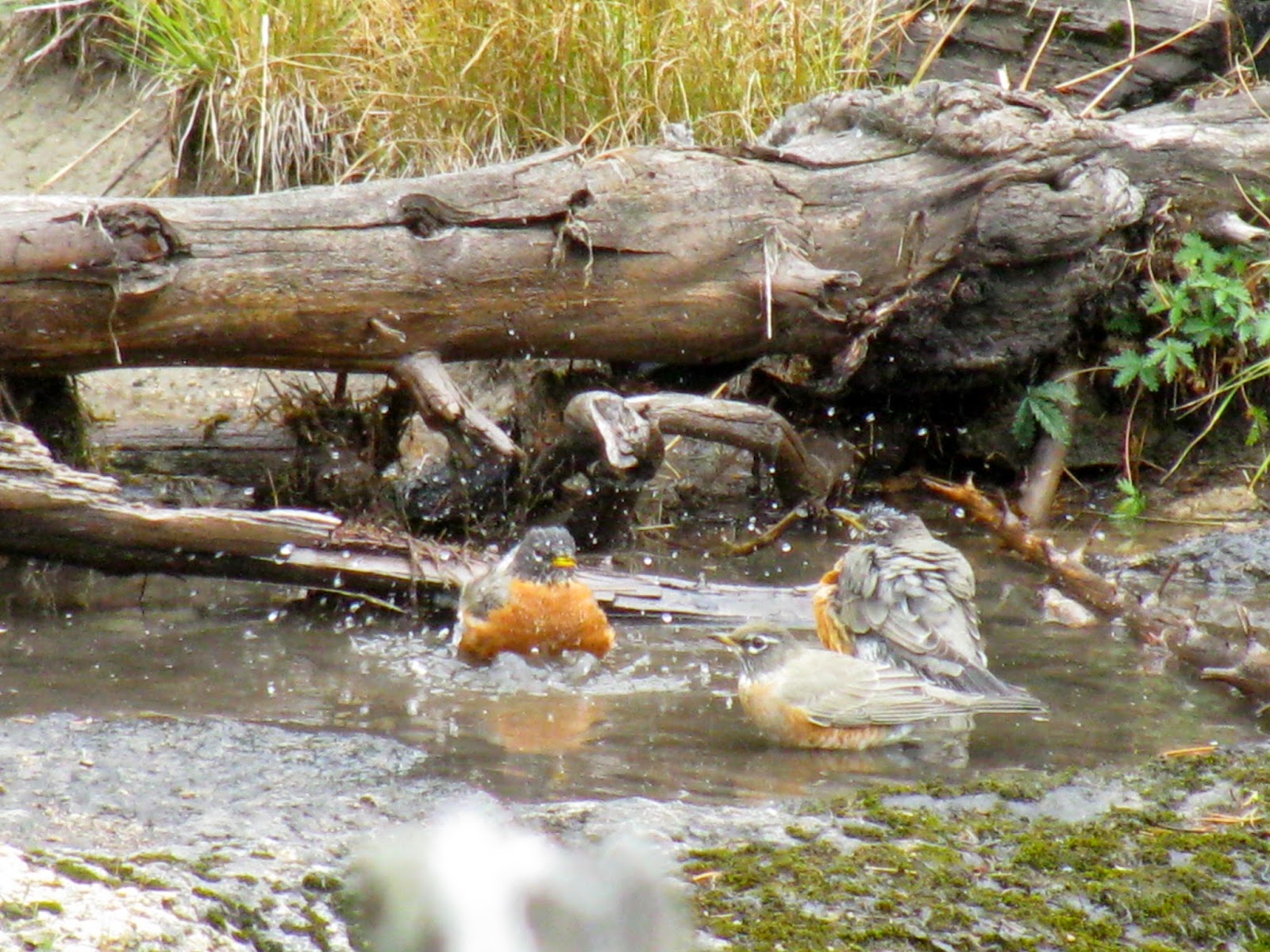 On the descent Matt noticed a few American robins splashing about in a puddle not too far off the trail.  While splashing robins are certainly something one could see in any birdbath in the city it was a spectacle I'd never seen in such an earthy setting.  It was an all-natural bird bath party!  They splashed and preened and splashed some more...on and on and on.  I was watching the hubbub through my binoculars when a hairy woodpecker happened to fly right into frame, landing on a burned tree near the robin's bathing pool.  He proceeded to put on quite a show for us pounding the standing deadwood and extracting insects which he quickly gobbled up one after another.  There was also a squirrel near the overlook that was eating pine nuts like little ears of corn.  We watched the fuzzy little thing--I have a great fondness for small animal hands and animals eating things--until she grew weary of our lingering presence and sent us on our way with a peal of loud chattering. 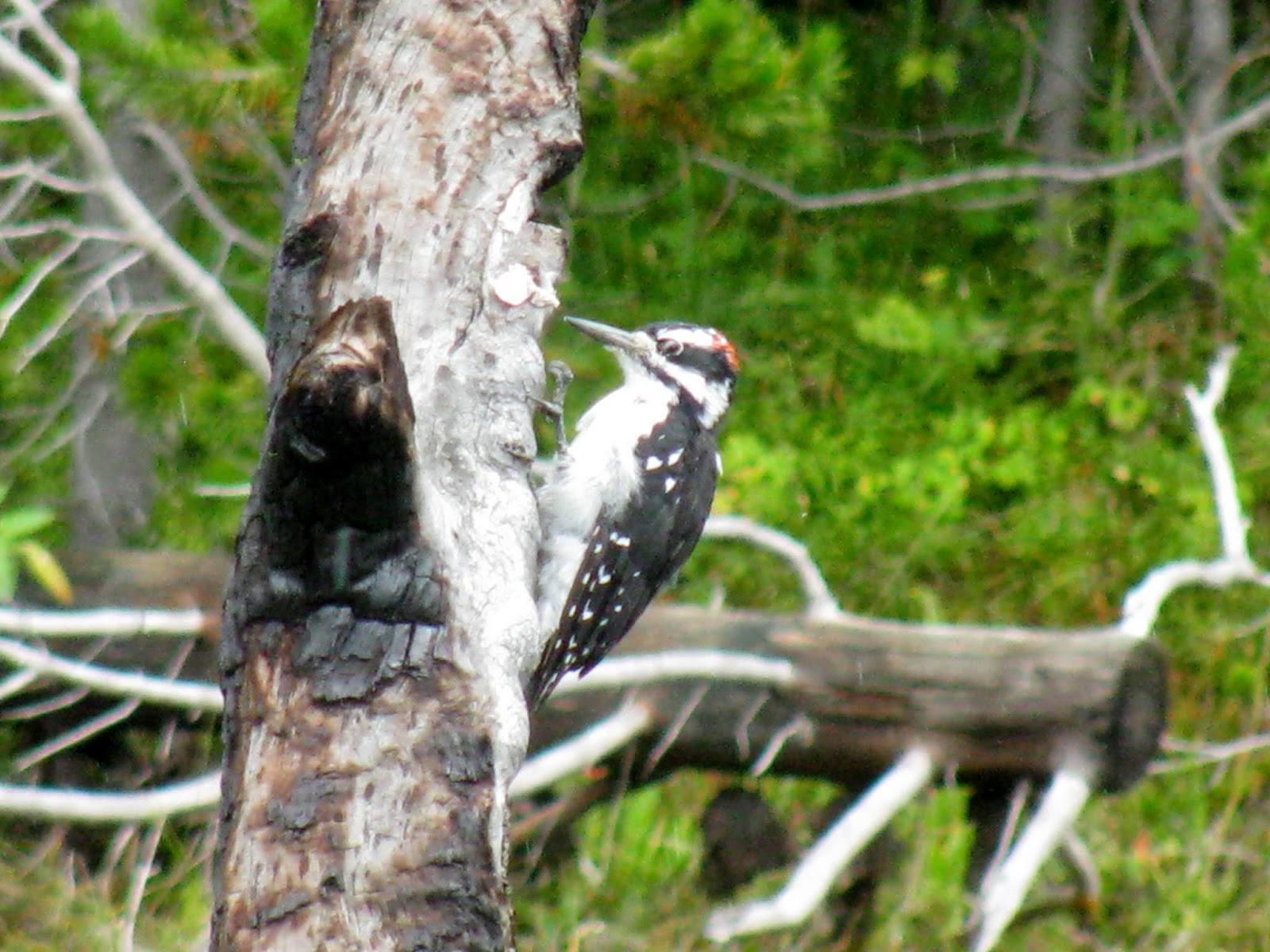 We hiked back down--a very easy stroll--and took in the geyser basin at West Thumb.  We were already there so it just made sense.  It started to rain again as we made our way around the boardwalks, but we didn't let that put the dampers on our fun.
Oh, I love geysers.  And birds.  And trees.  And Yellowstone.  And hiking with Matt. 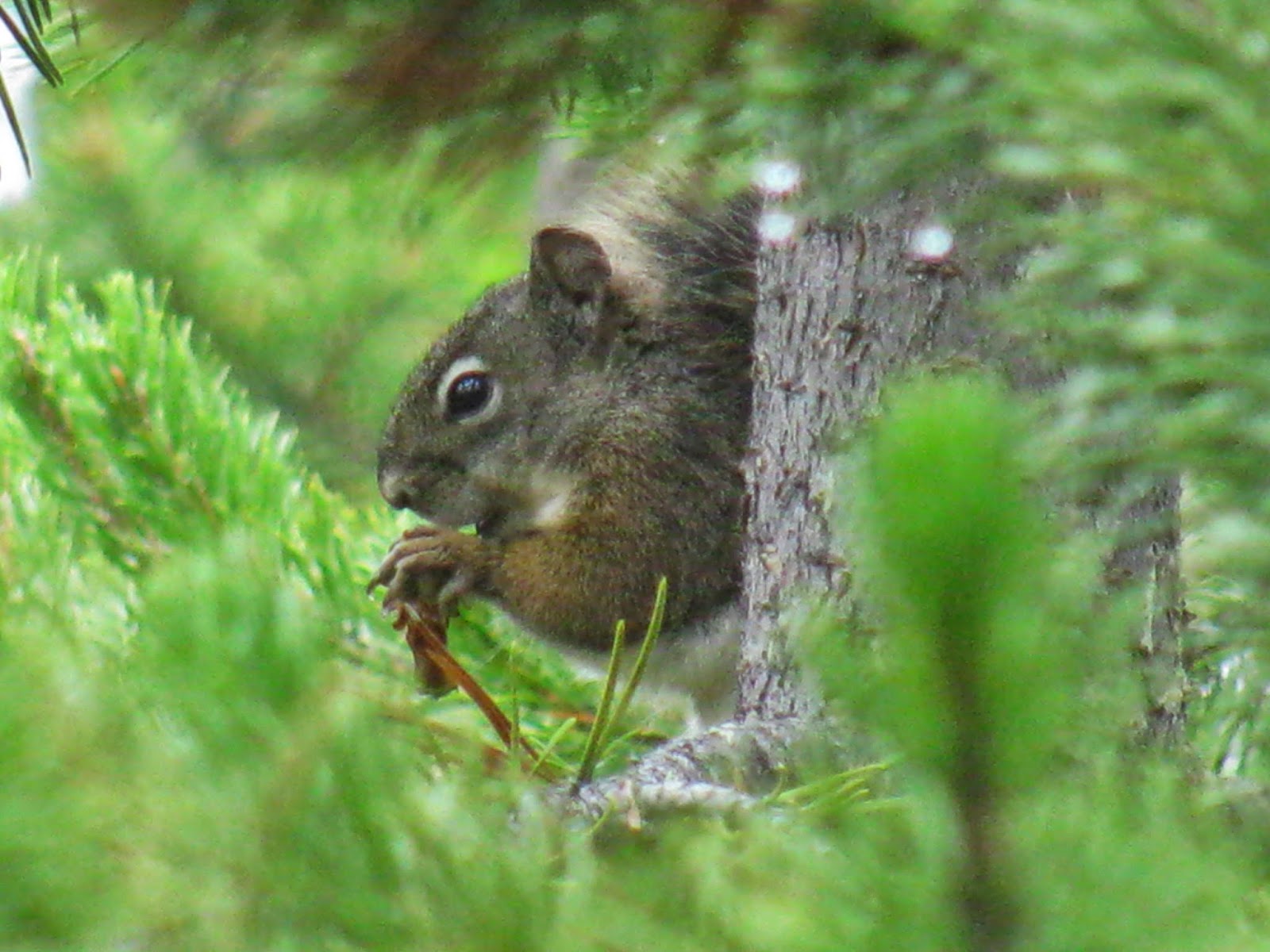