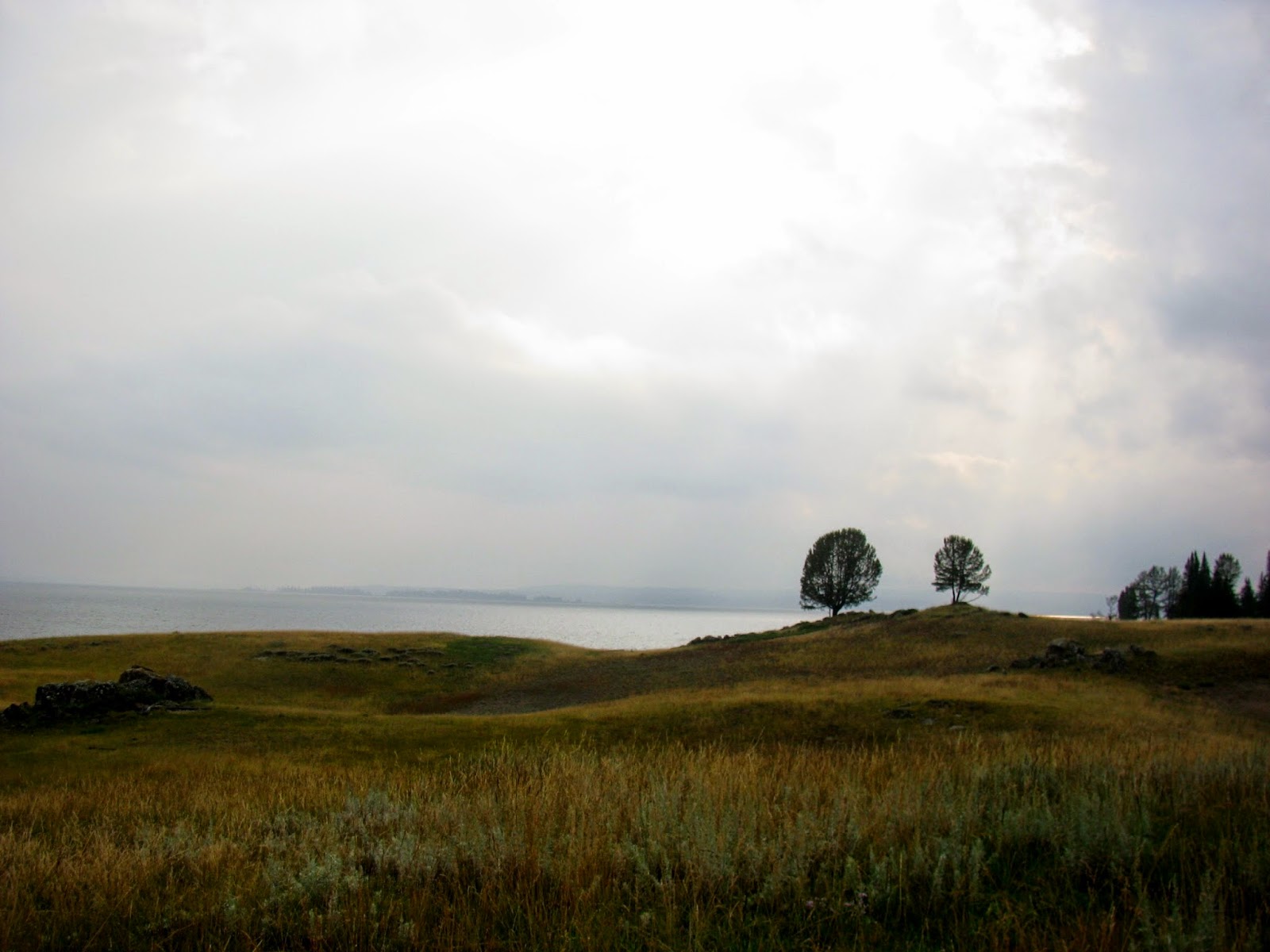 Ever since we got our first Yellowstone hiking guide I've had my eye on a hike called Storm Point.  We've never done it before though because in previous years we made our visits almost exclusively in Springtime when the lake is still frozen and the trail not recommended due to bear activity.  When Matt and I decided to go to the park for Labor Day this year it was one of the first hikes I suggested.  I don't know why exactly,  but I just really thought it would be cool to stand on a rocky point staring out into the expanse of Yellowstone Lake. I just thought it would be a good hike.   Matt, who has less of an affinity for large bodies of water than I do--he really is more of a mountain man than a lake man--was more than happy to finally let me check this off my list, so to speak, on our autumn visit.

The hike to Storm Point leaves from right near Indian Pond where a small mixed group of shorebirds were wading.  There was a handful of leggy American avocets all in their sharply contrasting white-and-black winter plumage.   There were a couple bobbing, tottering spotted sandpipers.

The Storm Point hike is almost completely a loop--just under 2.5 miles total.  There are a few hundred yards of trail along the west shore of Indian Pond that are traversed both coming and going, but the rest of the journey is a large loop.  I like loops because they allow you to see a wider range of landscapes.  We took the fork to the left following the trail out along some bluffs over the shore of Yellowstone Lake. 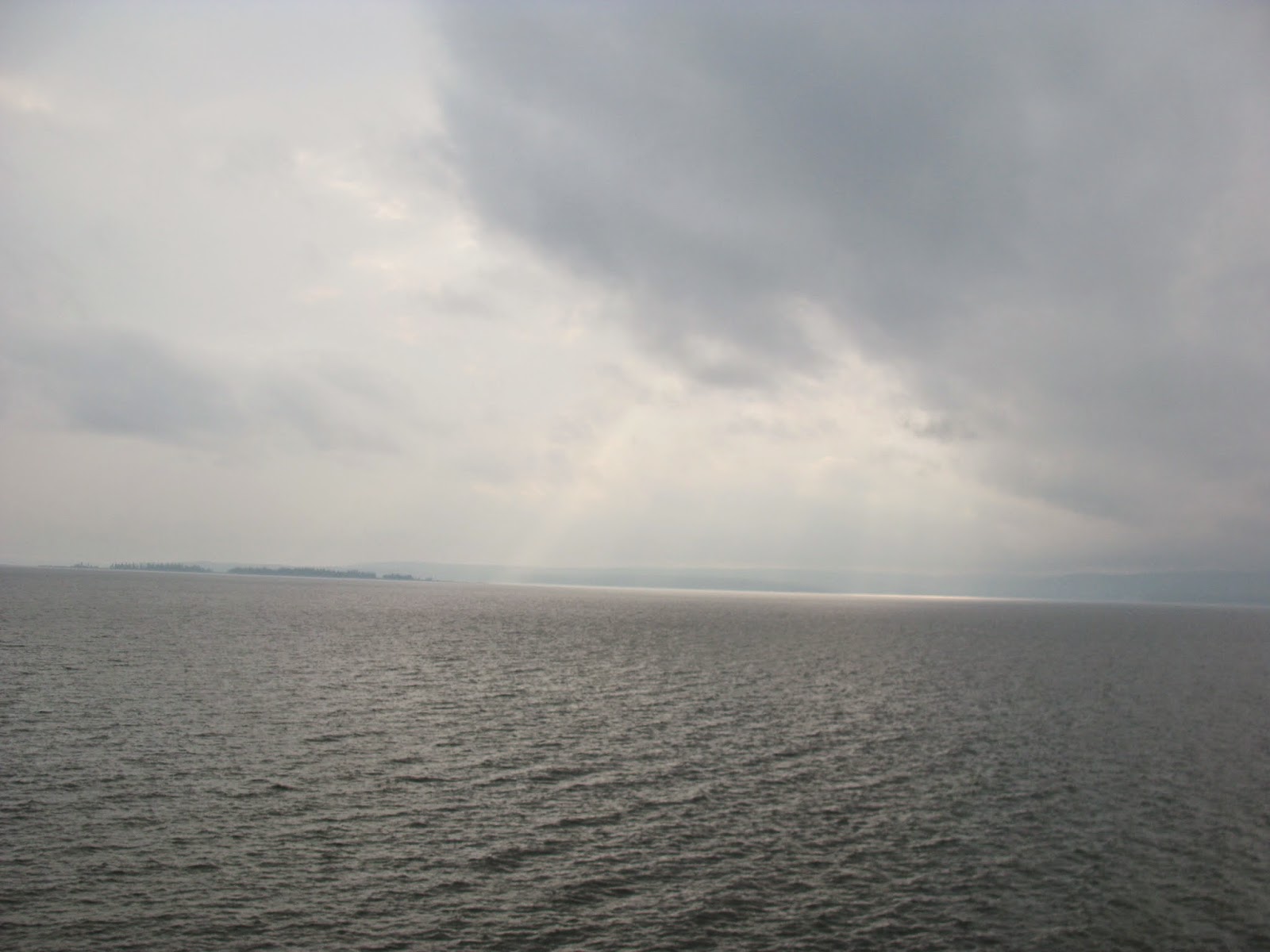 The views just got better and better the closer we got to Storm Point.  There was a stretch of forested trail as well as a really lovely open meadow with the lake as a backdrop right before Storm Point itself.  Yellowstone Lake is the star of the show for sure. 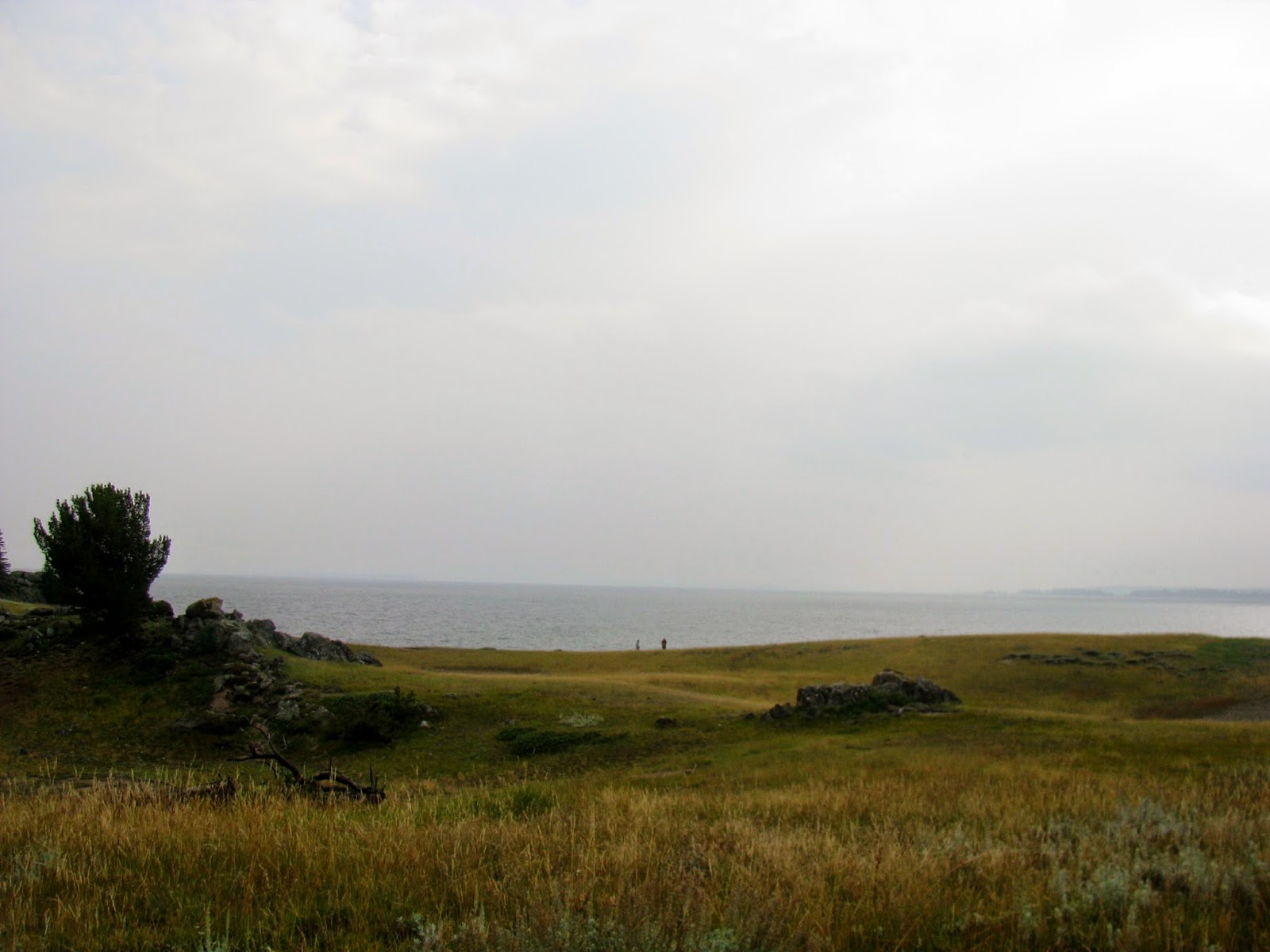 There is a spur trail out on to the point.  I must say, it was not quite what I had expected.  Storm Point stands much higher over the lake than I anticipated from reading about it.  The elevated observation point made for sweeping views though so I cannot say I was disappointed.  I'd like to go back on a day that is more clear.  It was quite cloudy and misty from all the rain when we were there.  In a way this added a soft, romantic filter to the surrounding panorama, but I'd like to see in on crisp, clear day sometime as well. 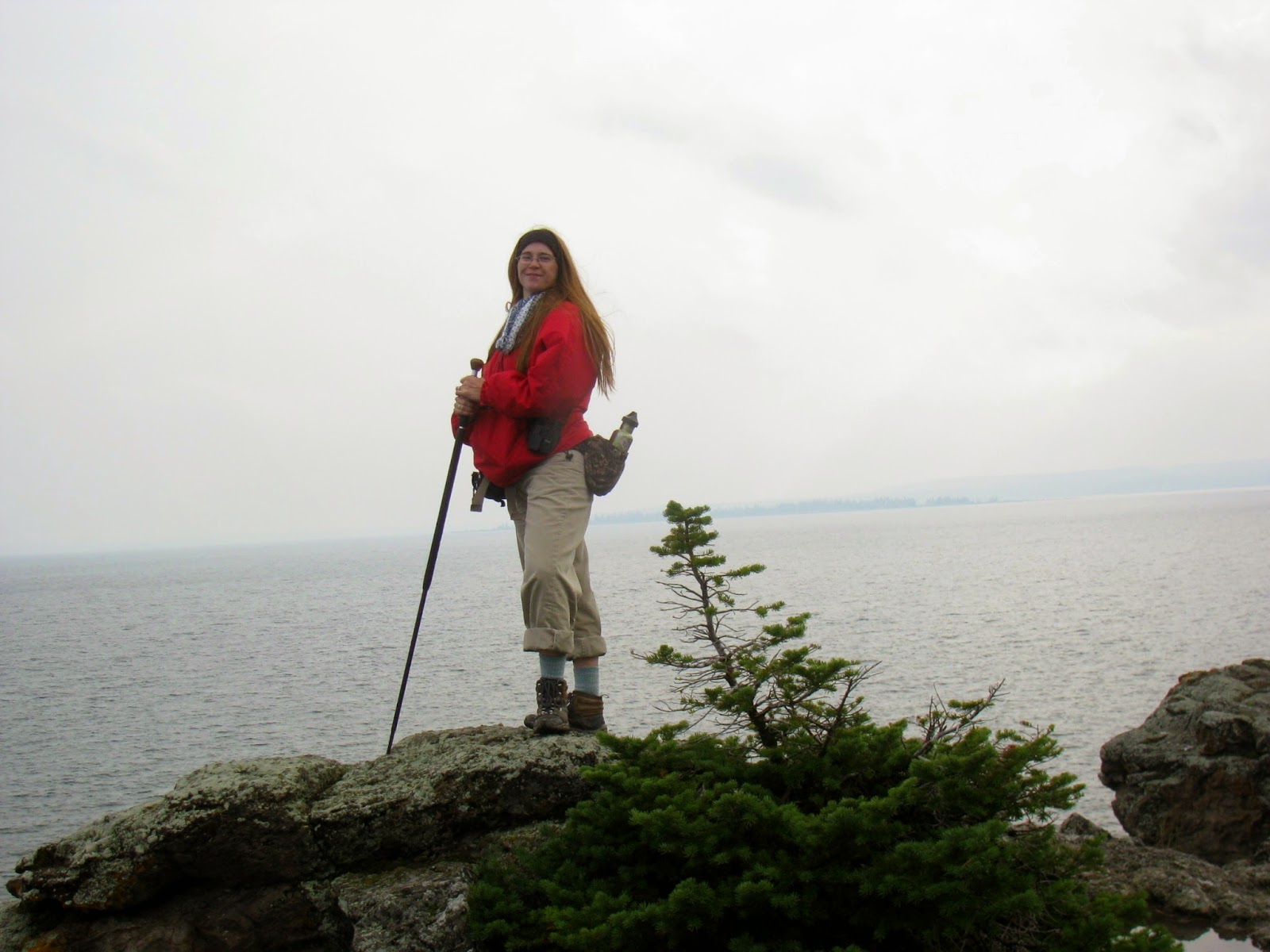 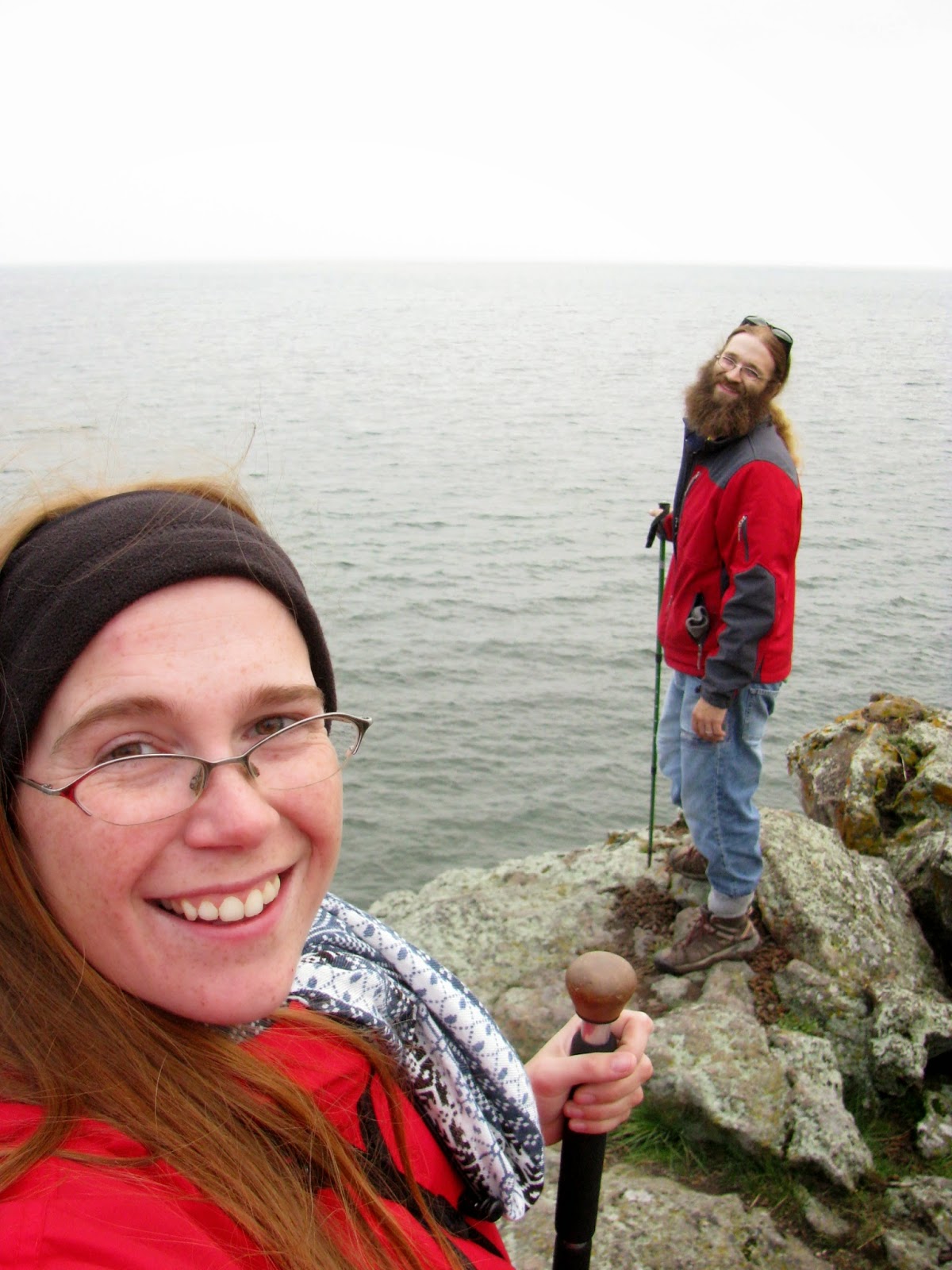 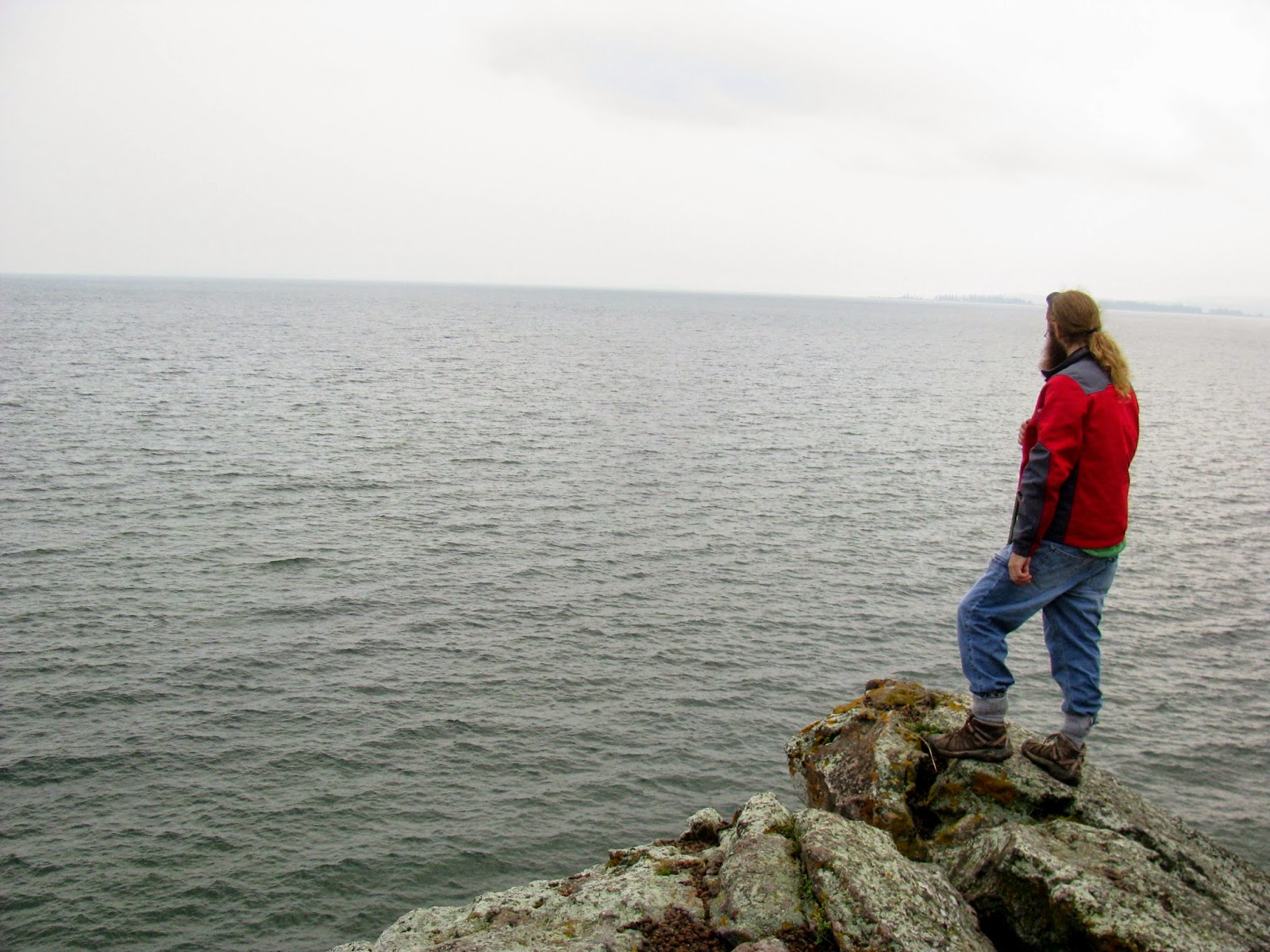 It was also out on this rocky point that we learned about marmot latrines. 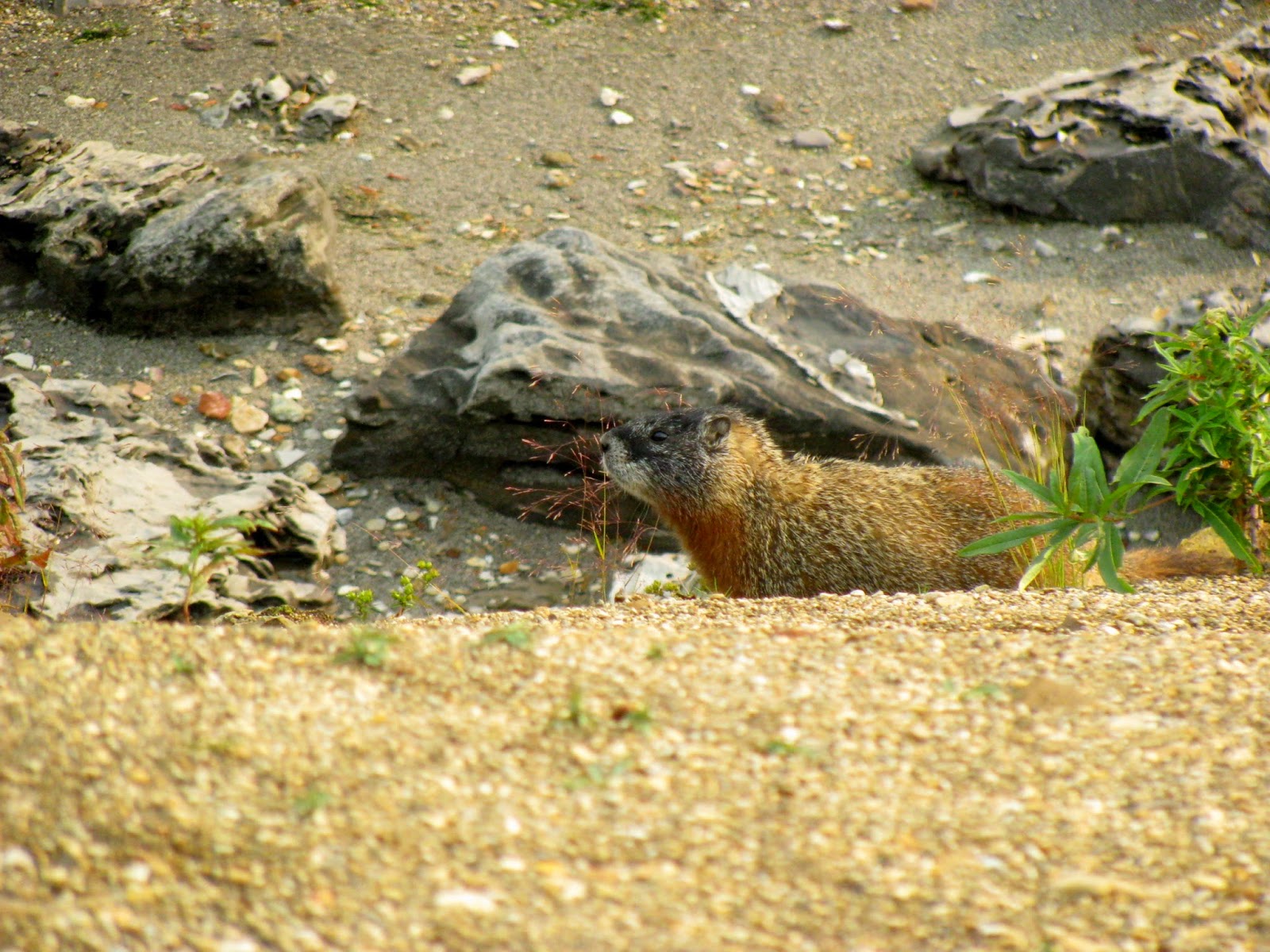 After rejoining the main loop we followed the shoreline of the lake once again--crossing paths with one of the resident yellow bellied marmots.   I felt compelled to break into a run.  The wide open sky and lake, the wind, the freedom...  I couldn't help myself.  My boots thumped the trail and my hair flew out behind me.  It was quite exhilarating.  And Matt caught up eventually.  (When I hit sand and running became quite challenging!) 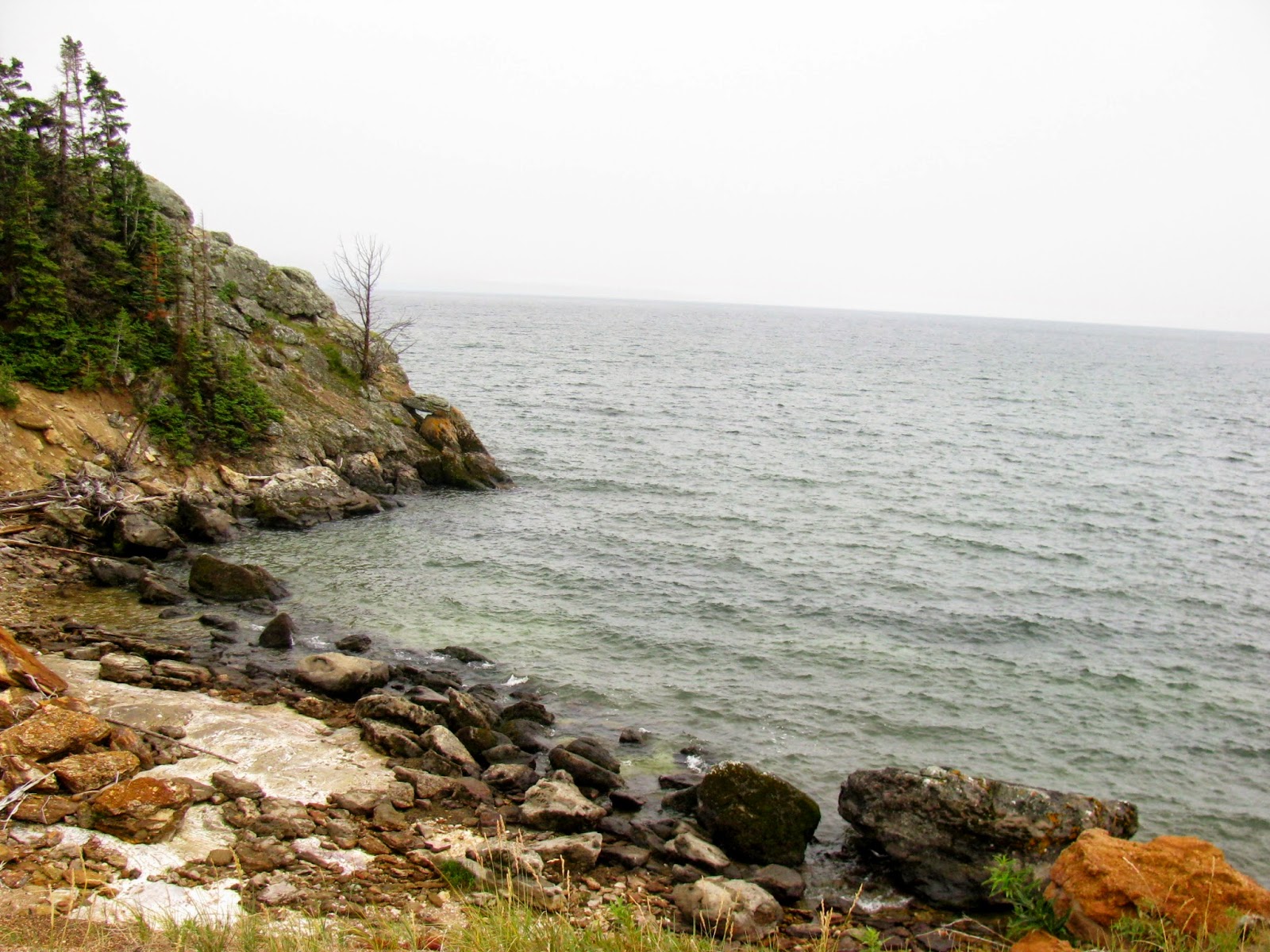 At the portion of the hike where the loop turns northward and starts heading back toward the trailhead we found another point jutting out into the lake.  This one was much lower--pretty much at lake level.  This was sort of what I'd envisioned Storm Point to be, with the waves lapping at my toes.  So, it was great.  I got to have both!
In this conglomeration of rocks we found a tidepool, for lack of a better term, that was geothermally heated.  We could feel the warmth rising from the surface by holding our hands in the air above it.  Every now and then we'd catch a hint of visible steam.  The sheltered and warmed pool was loaded with tiny fish.  There had to have been hundreds of thousands of them, all an inch or less in length.  I am not greatly knowledgeable about the lives of fish, but it seemed a pretty superb nursery pool to me. 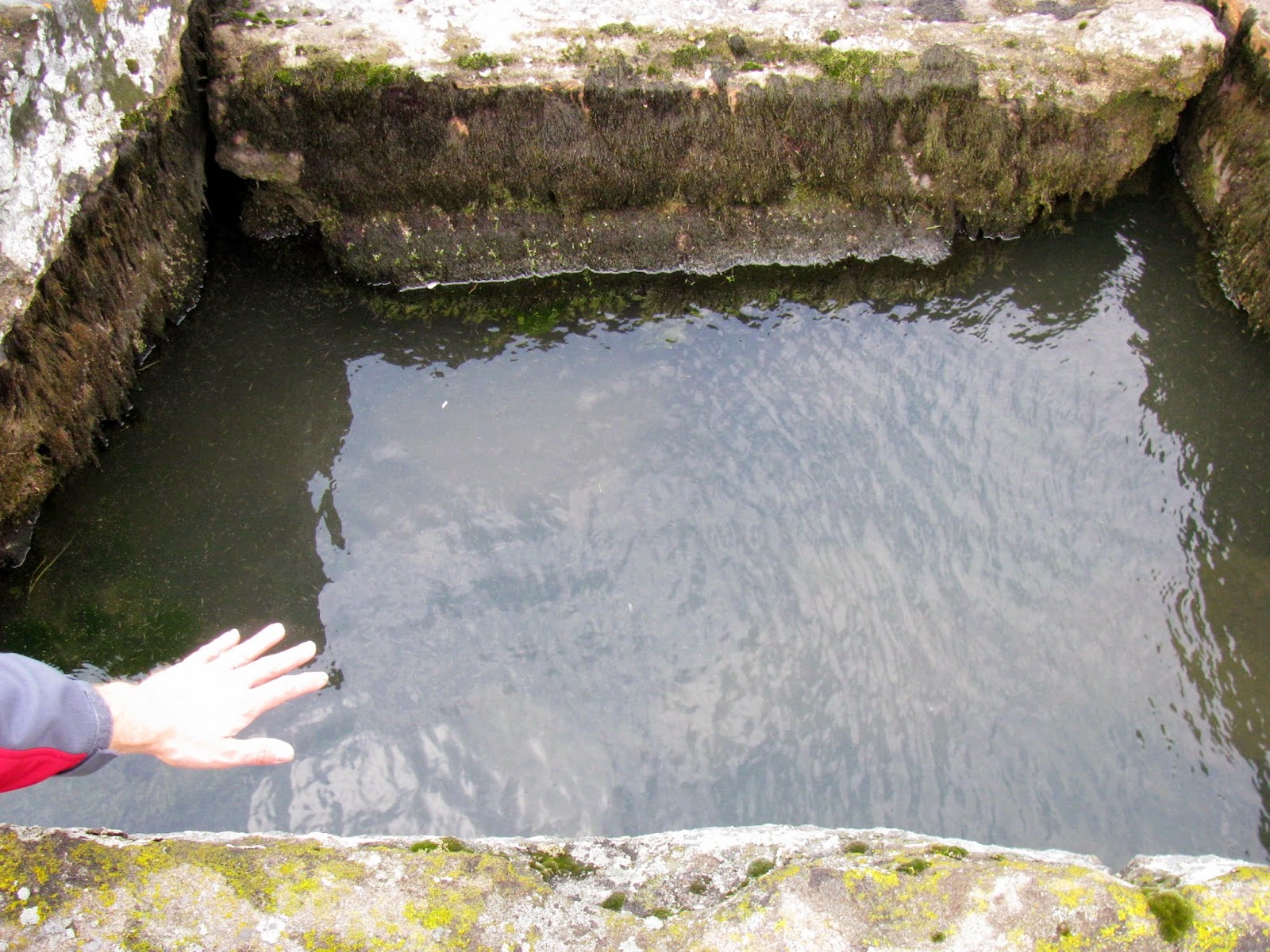 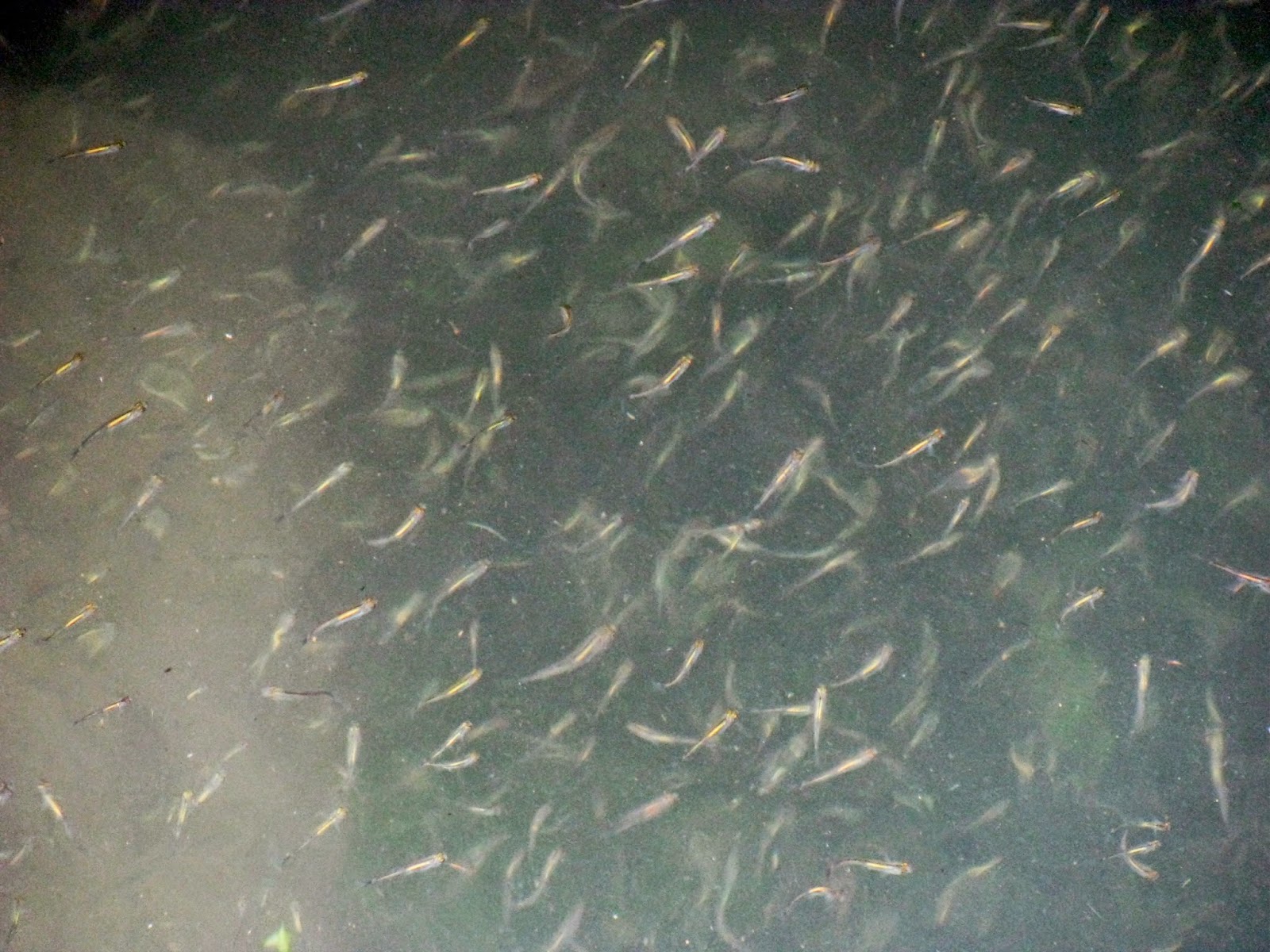 The remainder of the Storm Point loop turns away from the lake shore.  It was perfectly lovely, but I think I'd have preferred to stay lakeside.  I was pretty enthralled with it.  As we passed Indian Pond on the return trip we again stopped to watch the party of wading birds.  The motion of a female belted kingfisher caught our eye as she came in for a landing on a limb over the pond from which to look for fish.  We enjoyed the avian antics a while before deciding that the increasing winds and rains meant we should call it a hike. 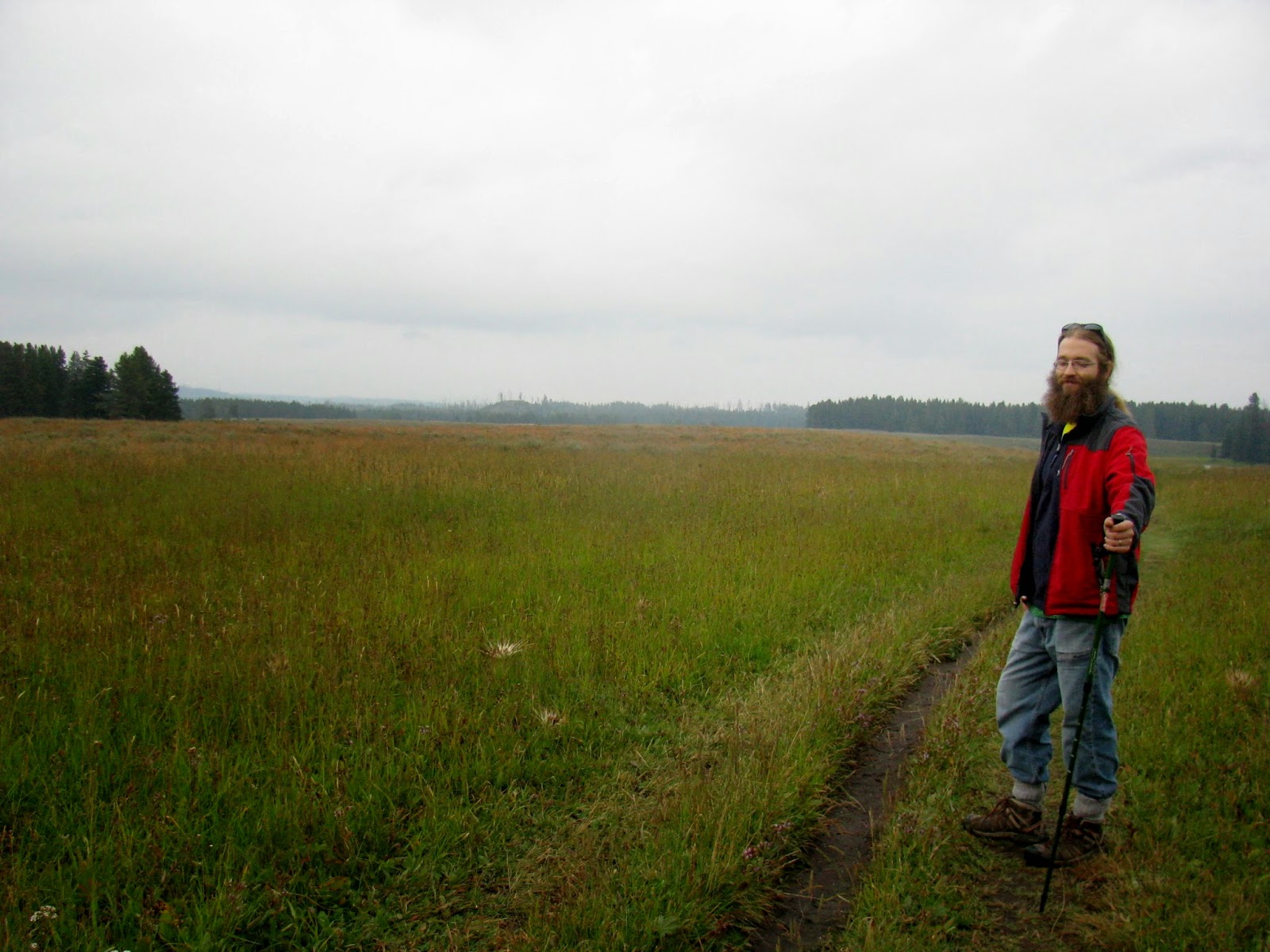 And it was just as good as I'd hoped it might be.