After much holiday-related delay below is the next installment in my Honeymoon Megavacation recap.
Matt and I were out of Vegas pretty darn early the day after Val's wedding.  Really, really early if you consider how little sleep we'd had in the days leading up to our departure for the parks segment of our trip.  The drive--with the convertible top down, of course--was lovely.  The desert sun shone in the bright, blue autumn sky.  The closer we got to Zion National Park the better the rock formations got.  There were lots of red rocks, which it would later turn out, is just the way Zion is--deeply, richly red.

We found the Watchman Campground where we had reservations for two nights.  I had to marvel at the place as it is so drastically different from the mountain campgrounds I am used to.  There was a lot of sand, gravel and open, largely un-vegetated areas all around the campground.  It was foreign to me.  We set up camp, met a new kind of squirrel, had a nice pasta lunch, and immediately set off to hike Angel's Landing. 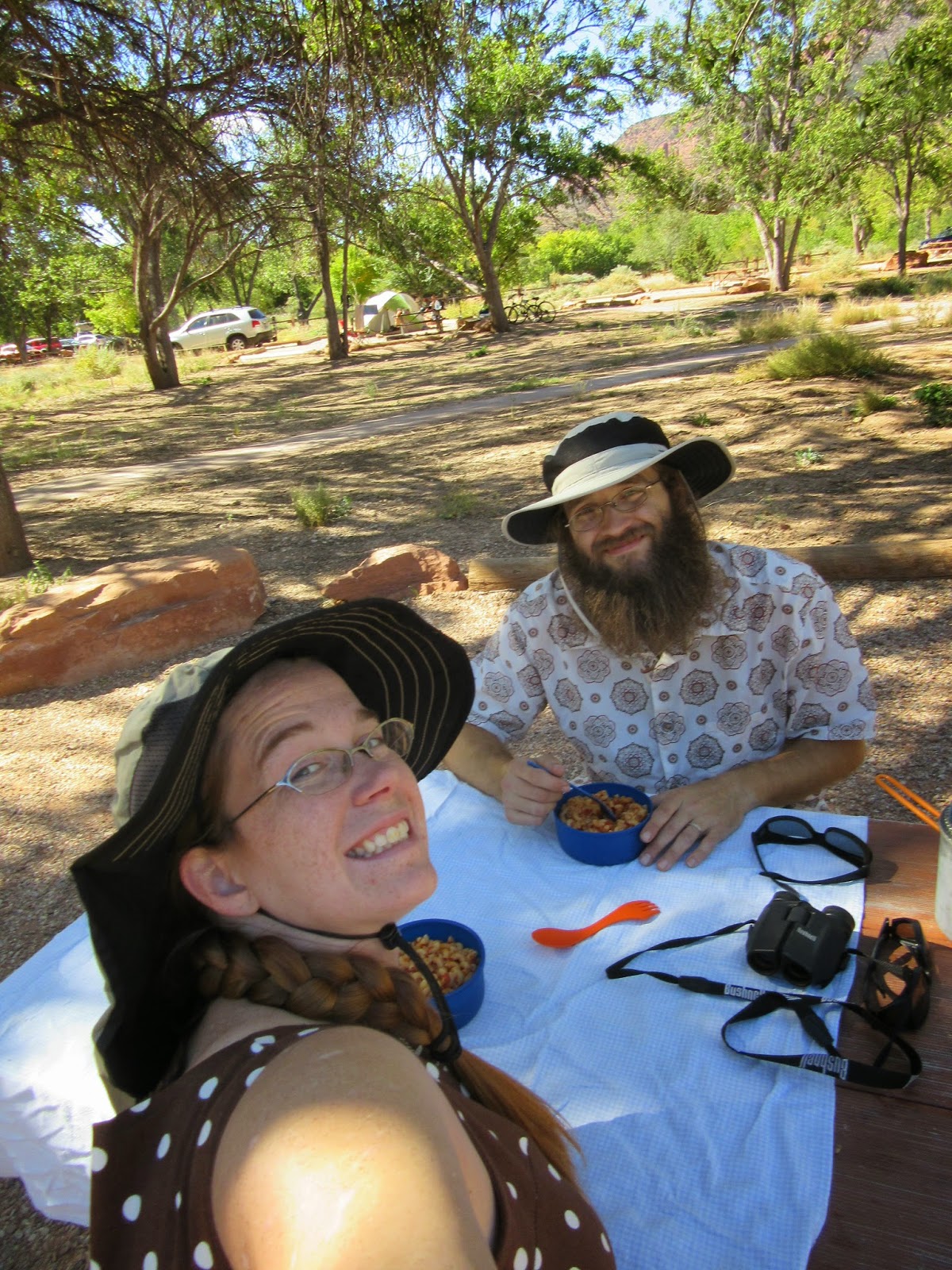 There is a shuttle system in Zion National Park to help ease traffic congestion and pollution as well as to help protect the landscape from being loved to death by tourists in personal autos.  I like the shuttles.  I think its a really good idea.  I wish they could figure out a way to make it happen in Yellowstone, frankly.  Its great for hiking because one can hike from Point A to Point B and then just hop on a shuttle and get dropped back off at Point A again.  Plus, then Matt and I can both just look out the windows and leave the driving to someone else.  They run every five to ten minutes so its super convenient in that regard, too.  I was impressed.  Though, I have to admit, I would have loved to ride through those towering red rock walls with the 360 degree view from the convertible. 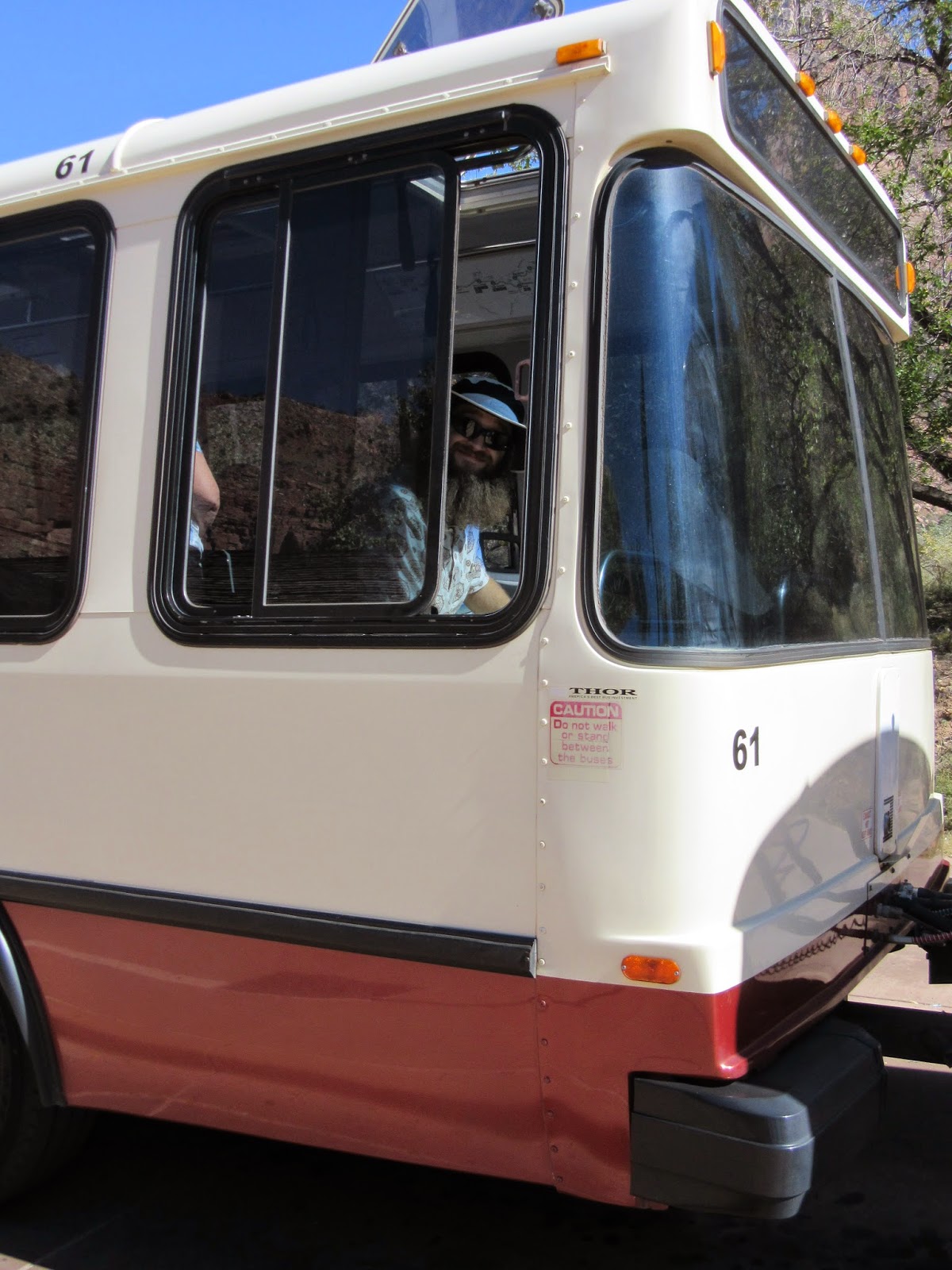 The shuttle dropped us near the Grotto Picnic are from which we followed a nice, wide, red trail across a footbridge over the Virgin River.  The sandy path traversed through the riparian zone along the river for quite a ways.  Matt and I were already amazed at the landscape.  There were trees and flowers I'd never seen before and lots and lots of cactus.  The Virgin River is strange looking.  The water is quite clear, but there is a lot of sand and sediment so that it almost looks milky at the same time.  Its hard to describe.  Angel's Landing towered over head and as we got closer and closer I had absolutely no idea how the trail we were on was going to wind up that crazy, steep rock formation to the very top.  It seemed impossible without actual rock climbing. 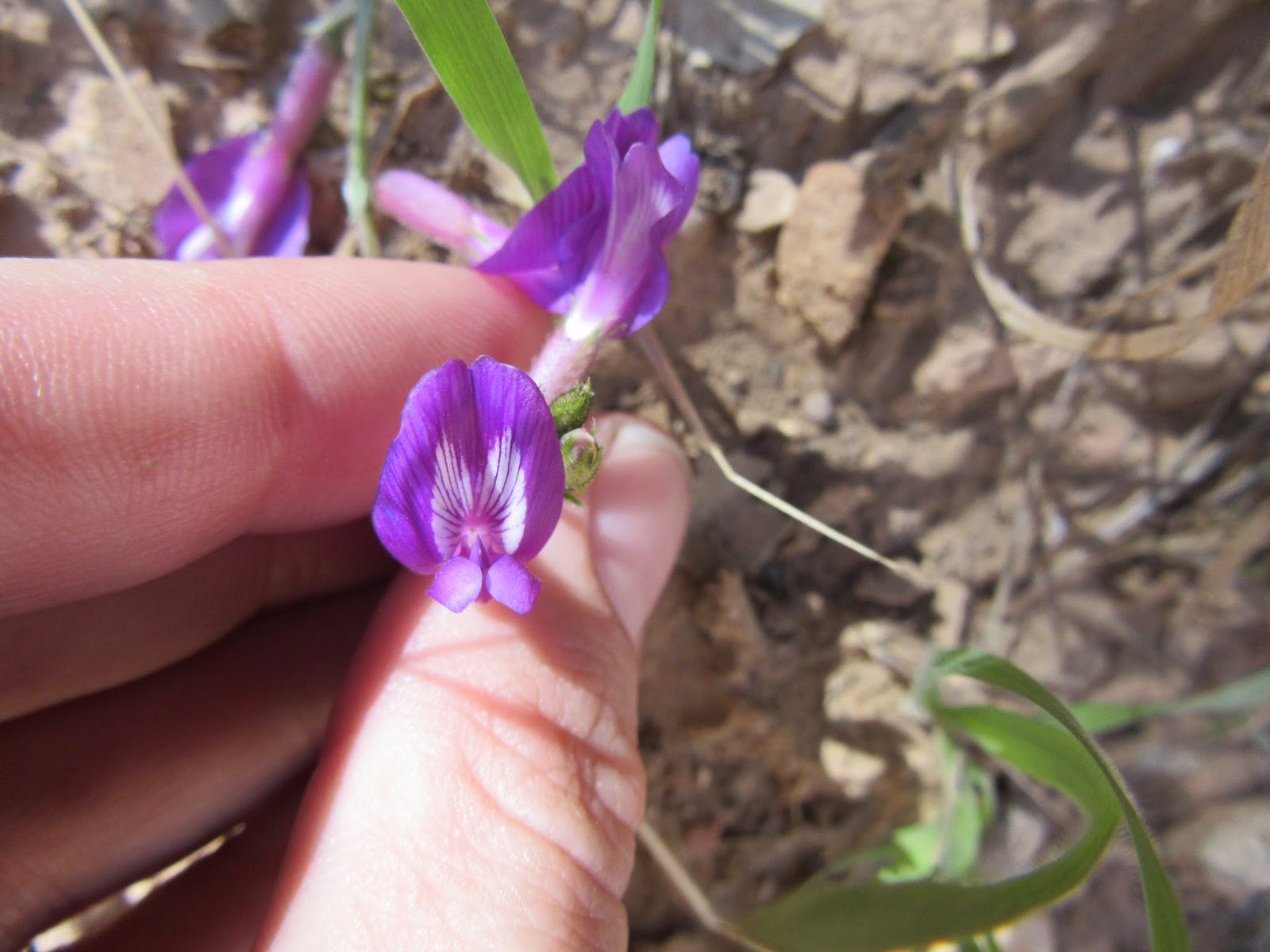 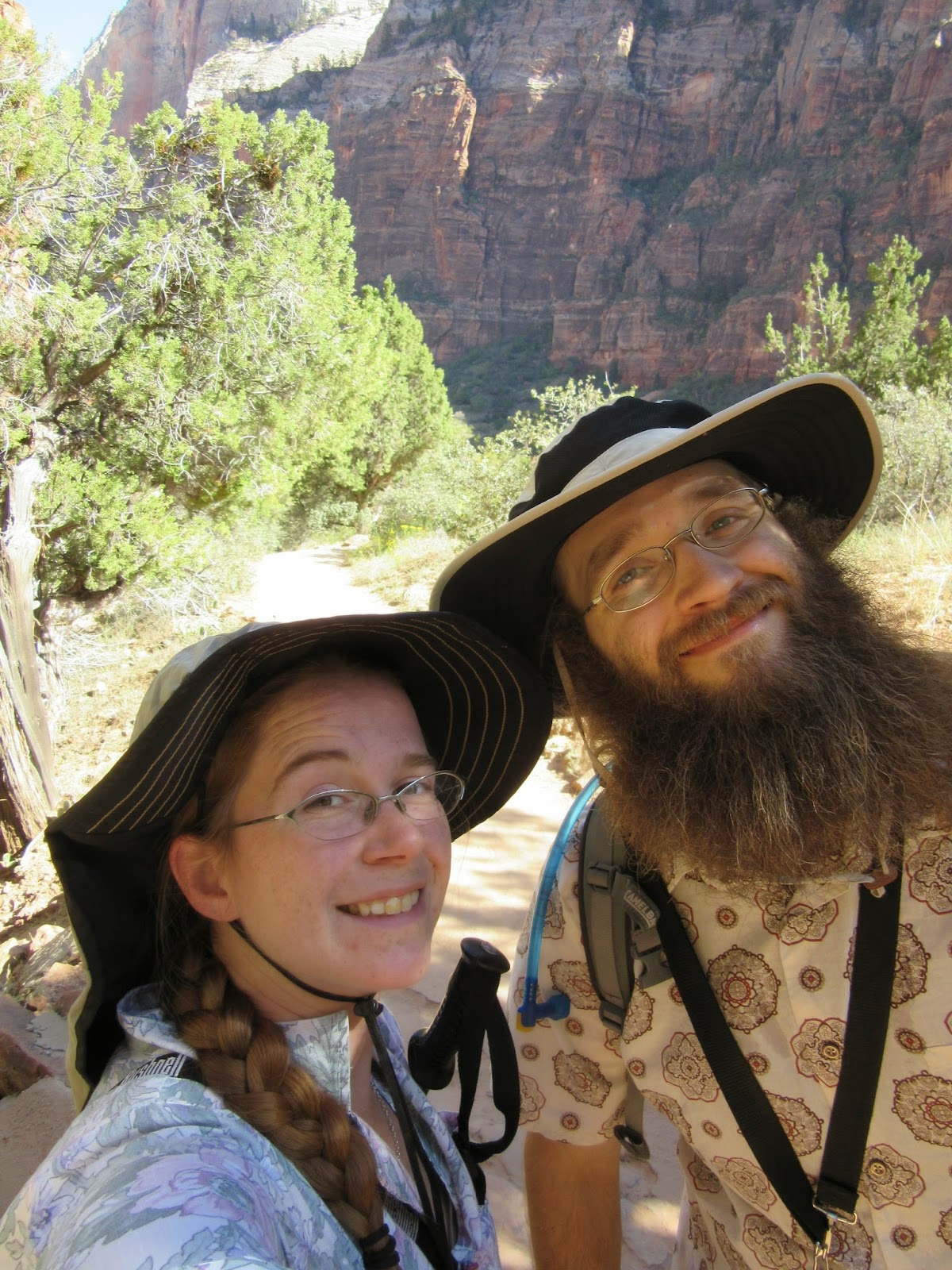 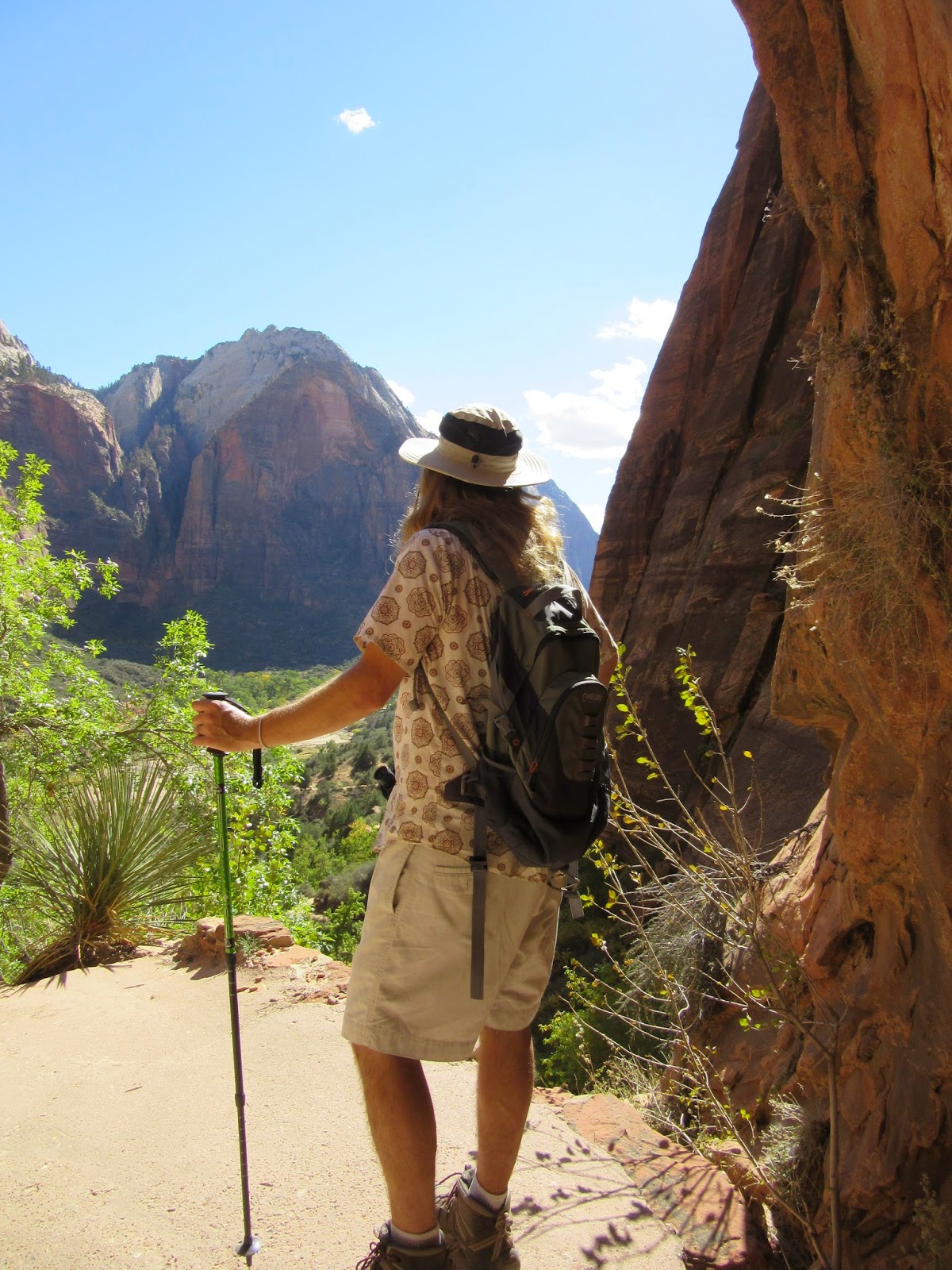 It was hot in Zion.  Much hotter than the previous days of our trip had been.  Plus, we'd arrived in the park and commenced hiking pretty smack dab in the heat of the day.  So, after a solid upward push on a short series of wide switchbacks we were quite appreciative of the refreshing coolness of Refrigerator Canyon.  It was very aptly named!  What a wonderful oasis in the midst of such heat!  In addition to being I'd bet 20 degrees cooler, it was also packed with trees and vegetation.  The walls of the canyon were carved by the winds into little hollows and nooks.  The rocks glowed an amazing red in the mid-day sun.  They were imbued with life-energy that just radiate out of them.  There is no other way to describe it. 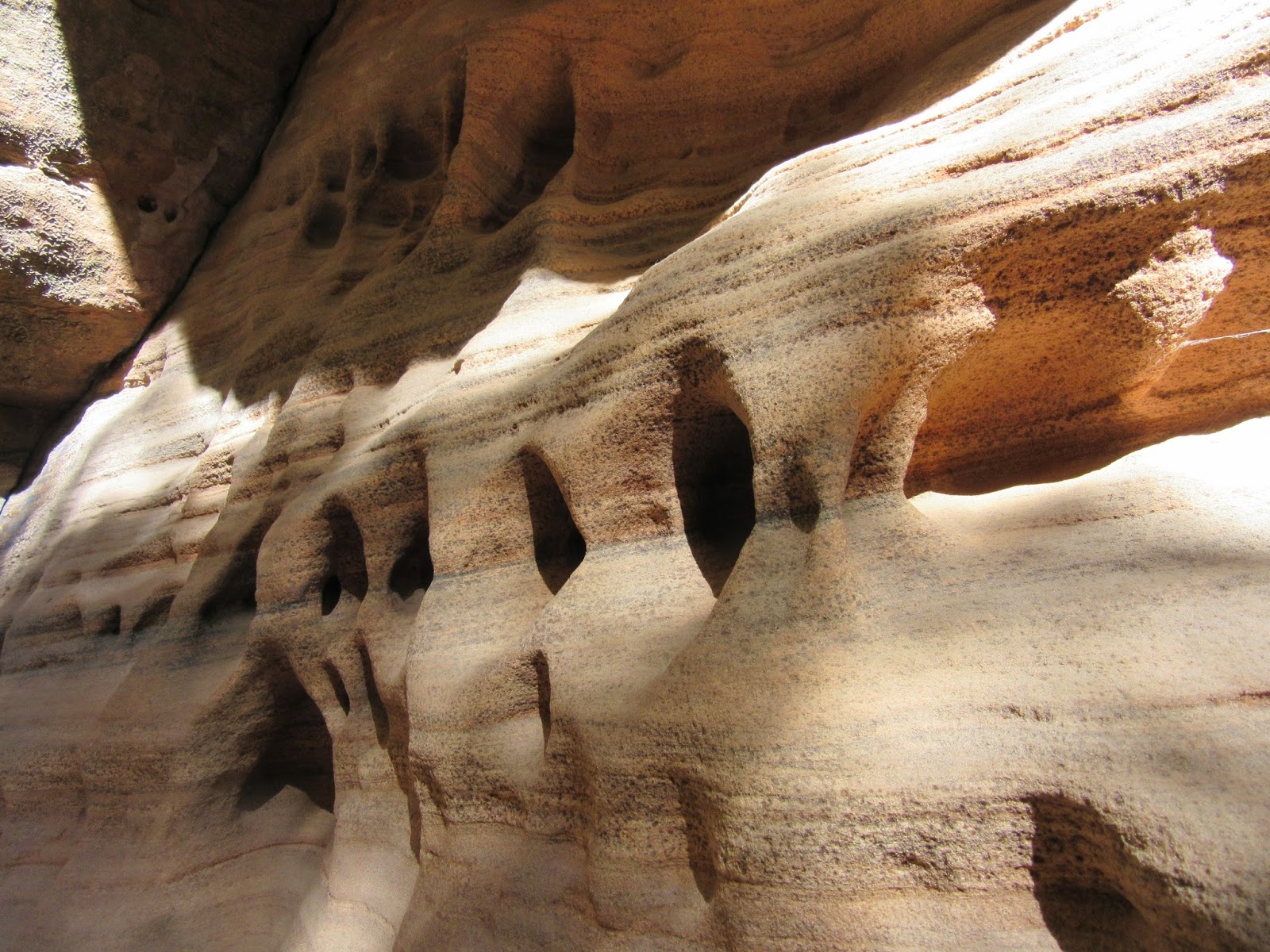 After exiting the natural air conditioning we continued up the hot trail until we hit Walter's Wiggles.  Walter's Wiggles are the funniest switchbacks I've ever seen.  The series of 21 switchbacks had to be very short and tight in order to fit into mountainside in a way that afforded quick and relatively easy access to Angel's Landing.  They're considered an engineering marvel by most.  Usually switchbacks are long and gradual so as to make a steep part easier.  Not so with Walter's Wiggles.  Each switchback is still steep and then you turn the corner and there is another just as steep!  Twenty times in a row!  It was really something to see and a real leg-burner, too.
Once cresting the top at Walter's Wiggles its not too far to Scout Lookout which offers lovely views of Zion Canyon.  It also serves as the turn around point for those who lack the, oh, I don't know, guts, bravery, ambition, craziness...to climb up to Angels Landing.  Because it is often just as much climb or scramble as hike after that point, pretty much following a "knife-edge ridge," out onto the Landing. 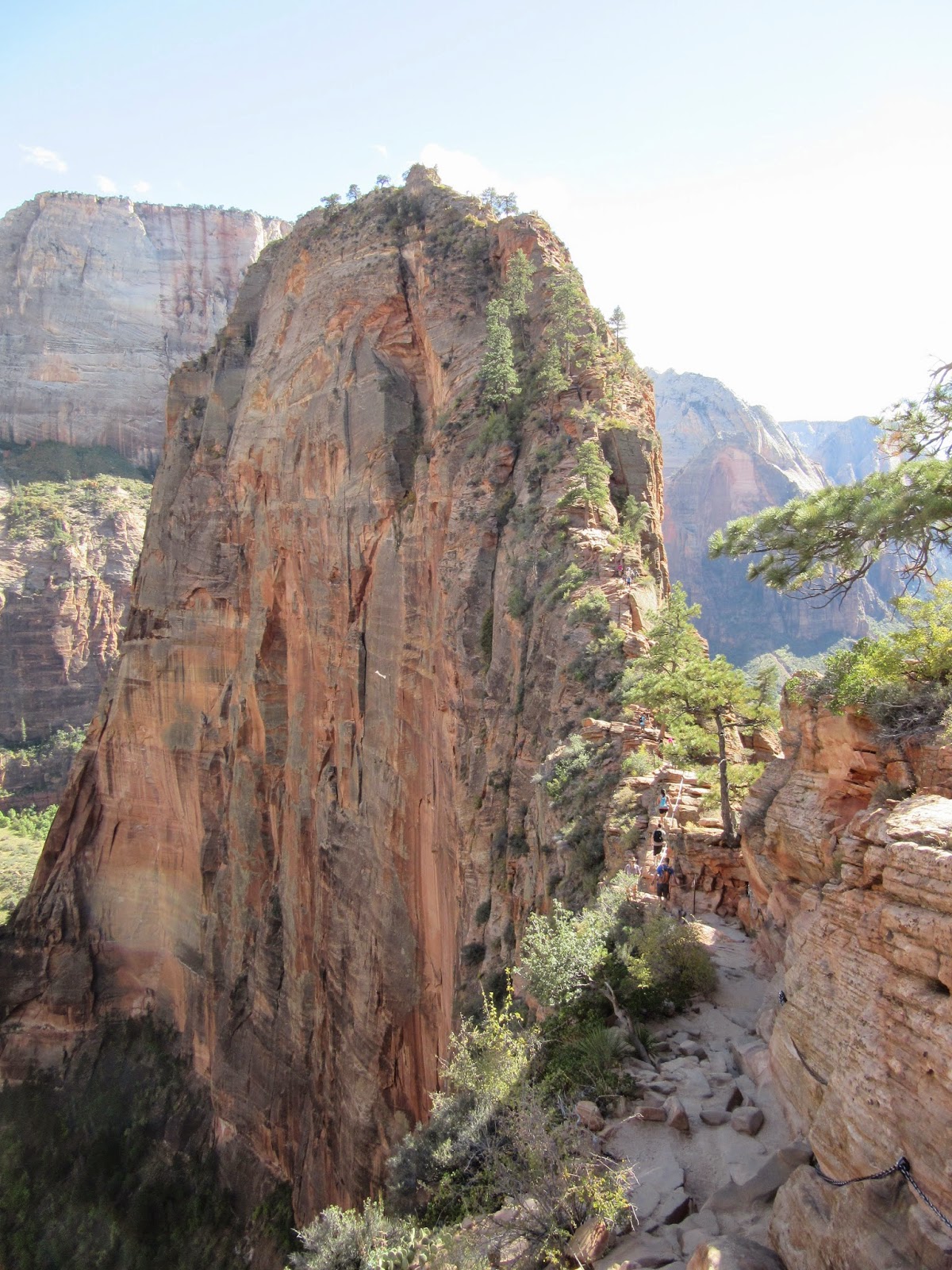 People with a fear of heights shouldn't even bother to continue.  I must admit a certain sense of trepidation when I looked up from my climbing and saw that skinny little ridge were were going to traverse to get out to the landing pad.  But, my mind and heart were set upon it and I really thought I could handle myself better than I did on that crazy steep glacial overlook--which indeed turned out to be the case.  So, onward we hiked, climbed, and scampered. 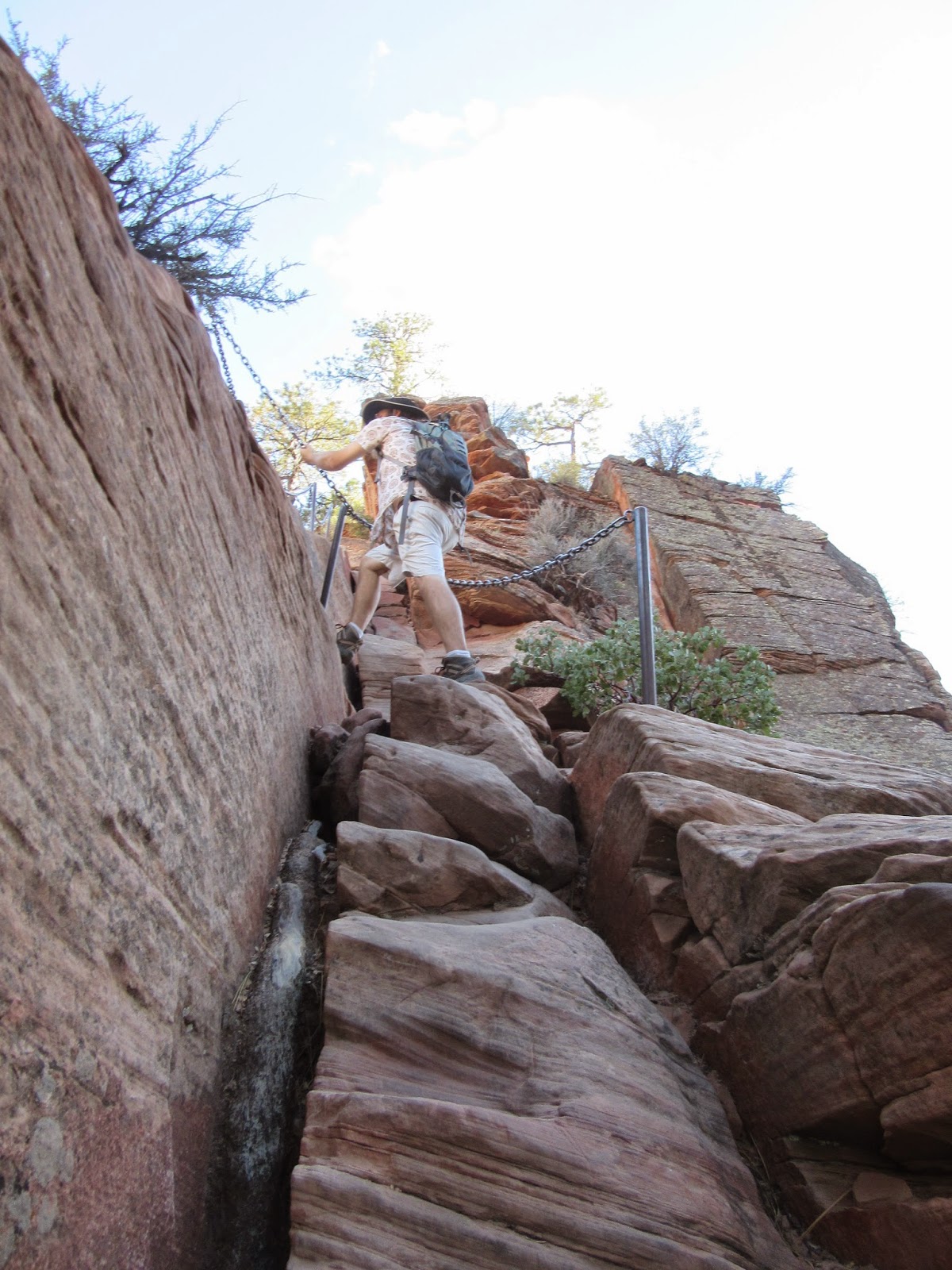 I don't know that I did much looking around on the hike up.  I was pretty focused on the bizarre, narrow, vertical hiking.  Matt and I agree it was the strangest trail we've ever visited.  I was concentrating more on the terrain very near me as I made sure I knew where the next section of chain was or where a good handhold was when the chains periodically vanished.  There were lots of tumbled rocks and gnarled tree roots to avoid tripping on--a particularly important point when there is 1000+ foot drop mere feet away.  So, it was, I think, even more dazzling when we reached Angel's Landing at last and a 360 degree panorama of epic proportions greeted my eye.   What a magnificent view! 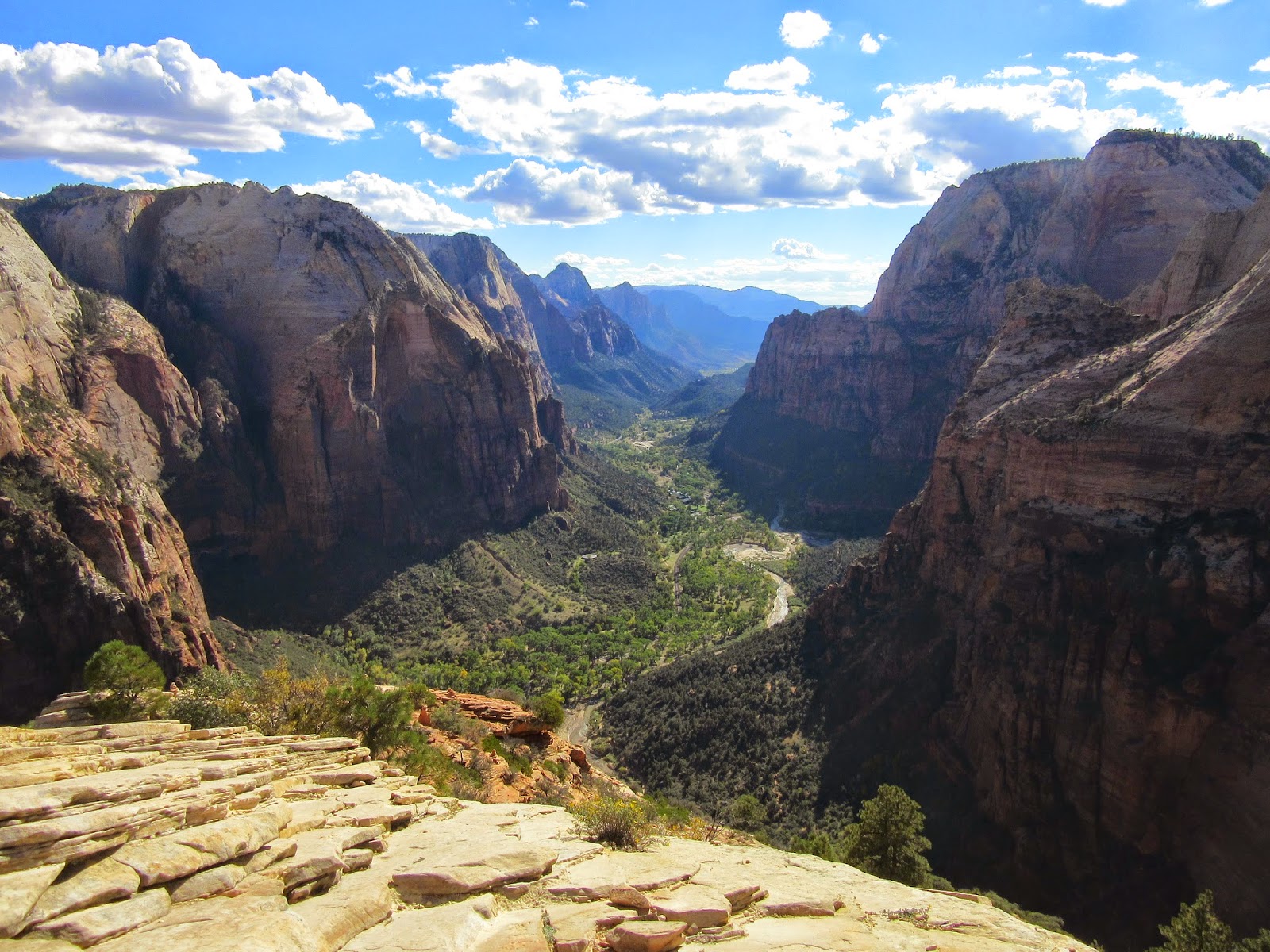 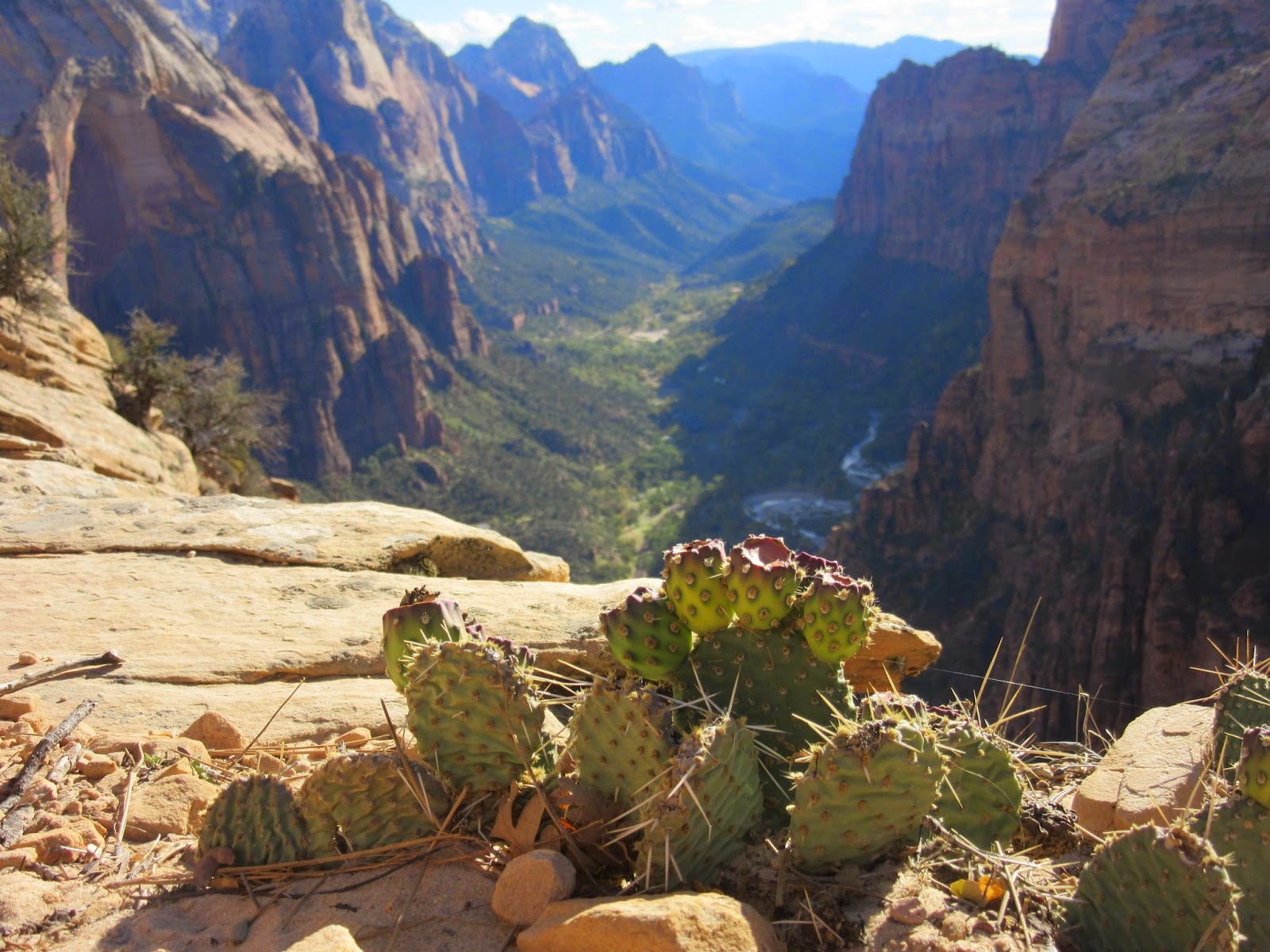 And then when we'd soaked up our fill of sunshine and mountain goodness it was down, down, down the same crazy, twisty, turny way we came. 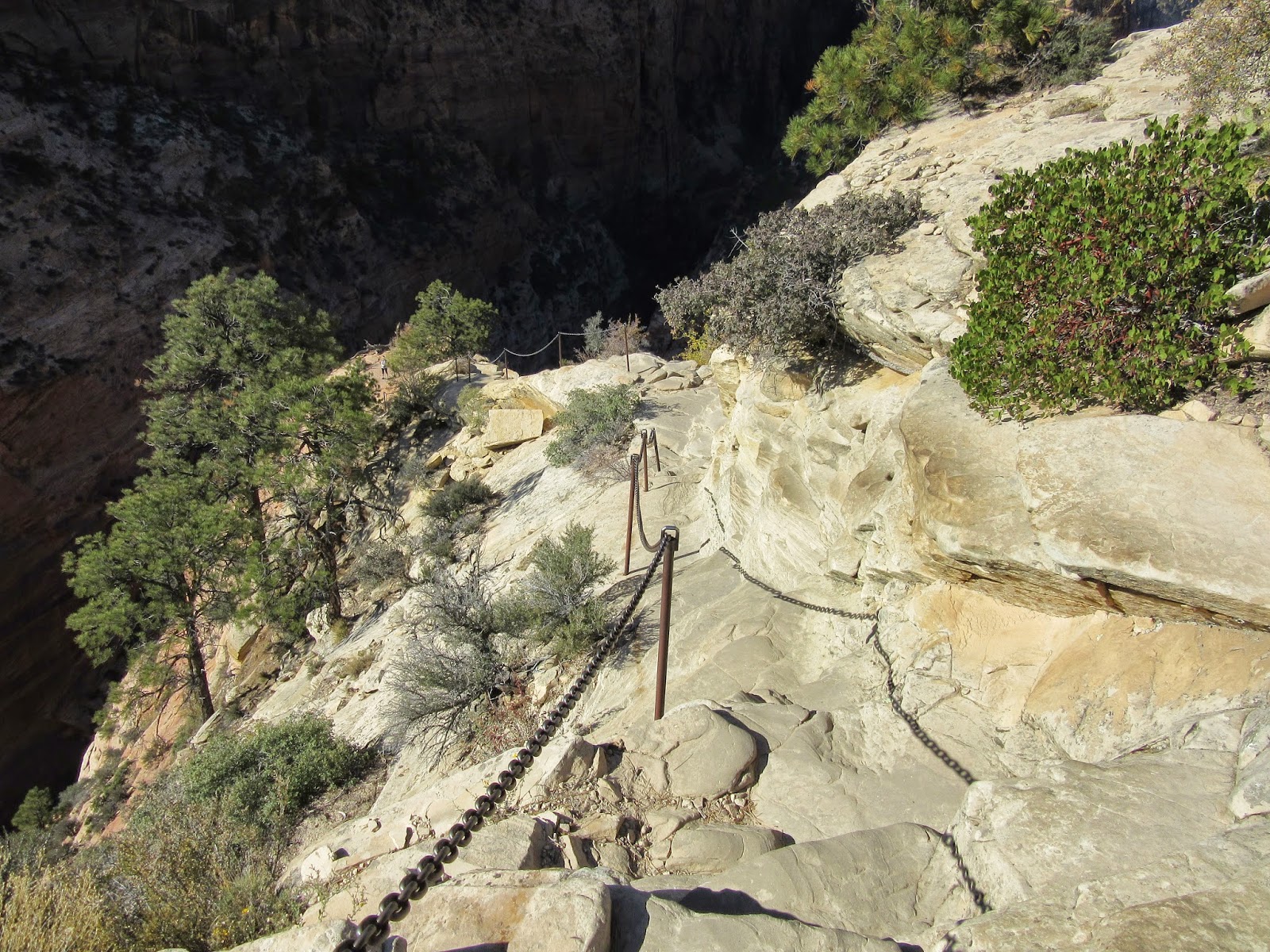 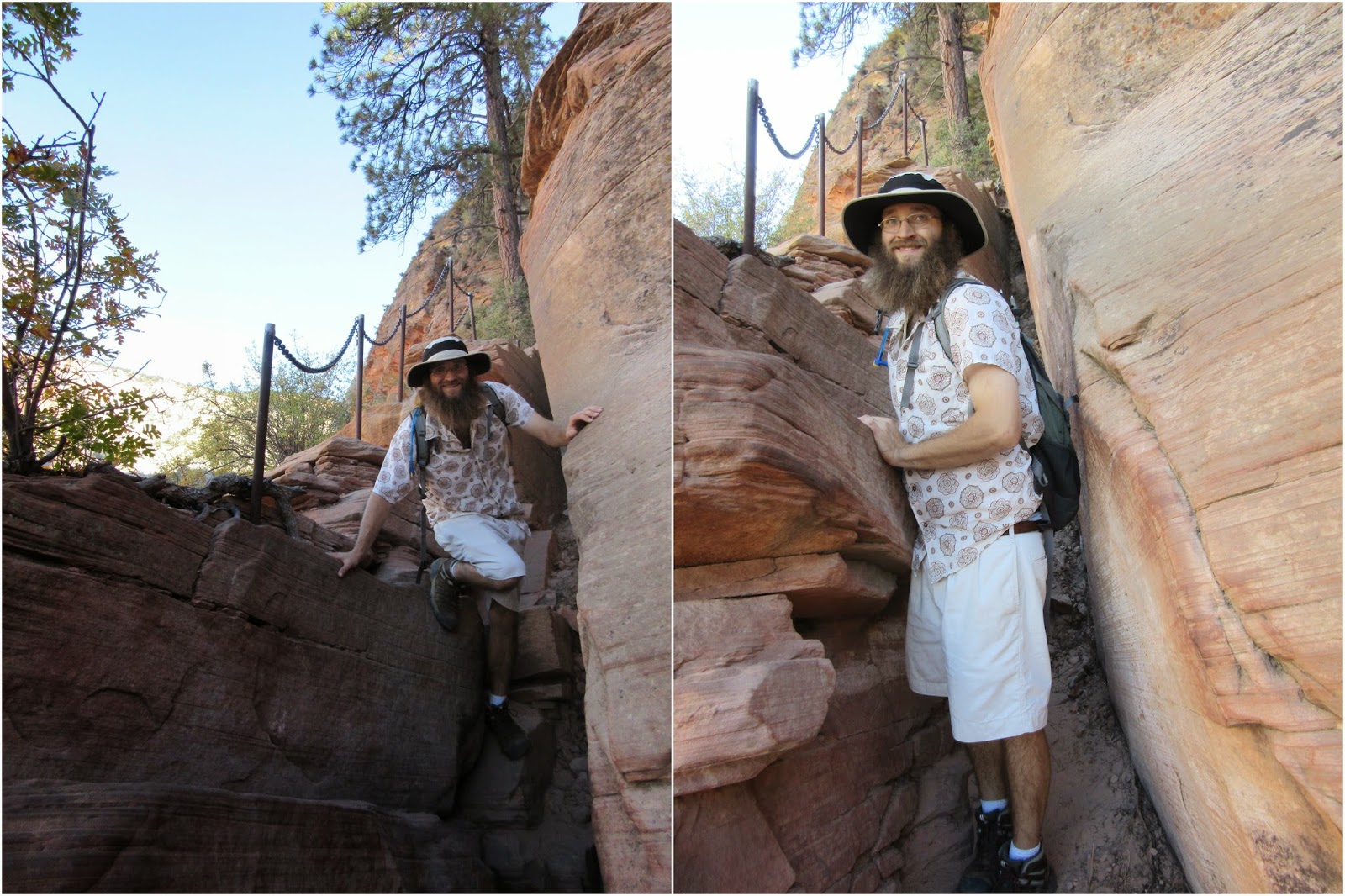 This time I stopped frequently for closer looks a the surrounding rock faces which towered overhead, the gnarled trees clinging to the side of a sheer drop, sedimentary layers and other geologic wonders, and the like. 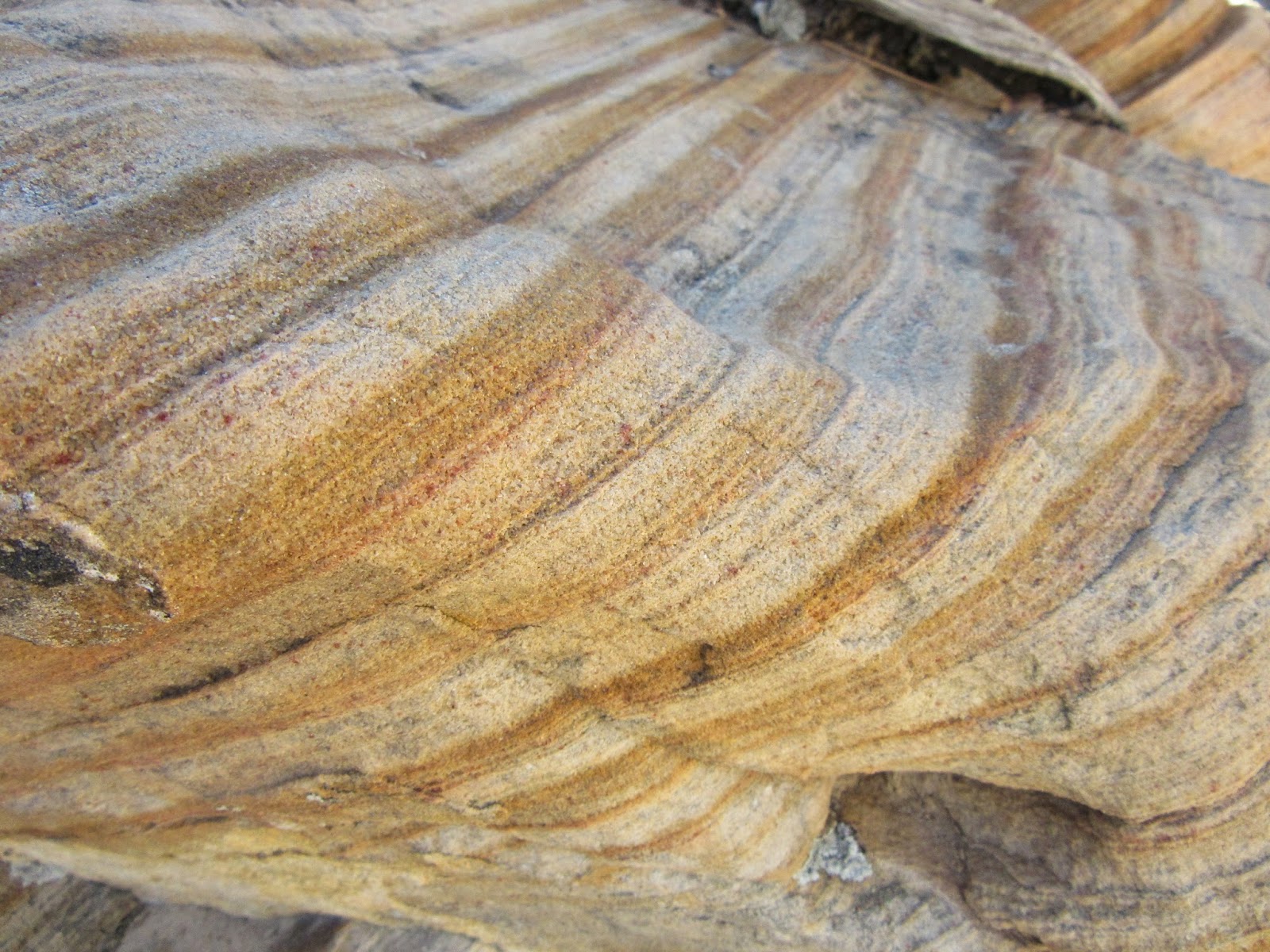 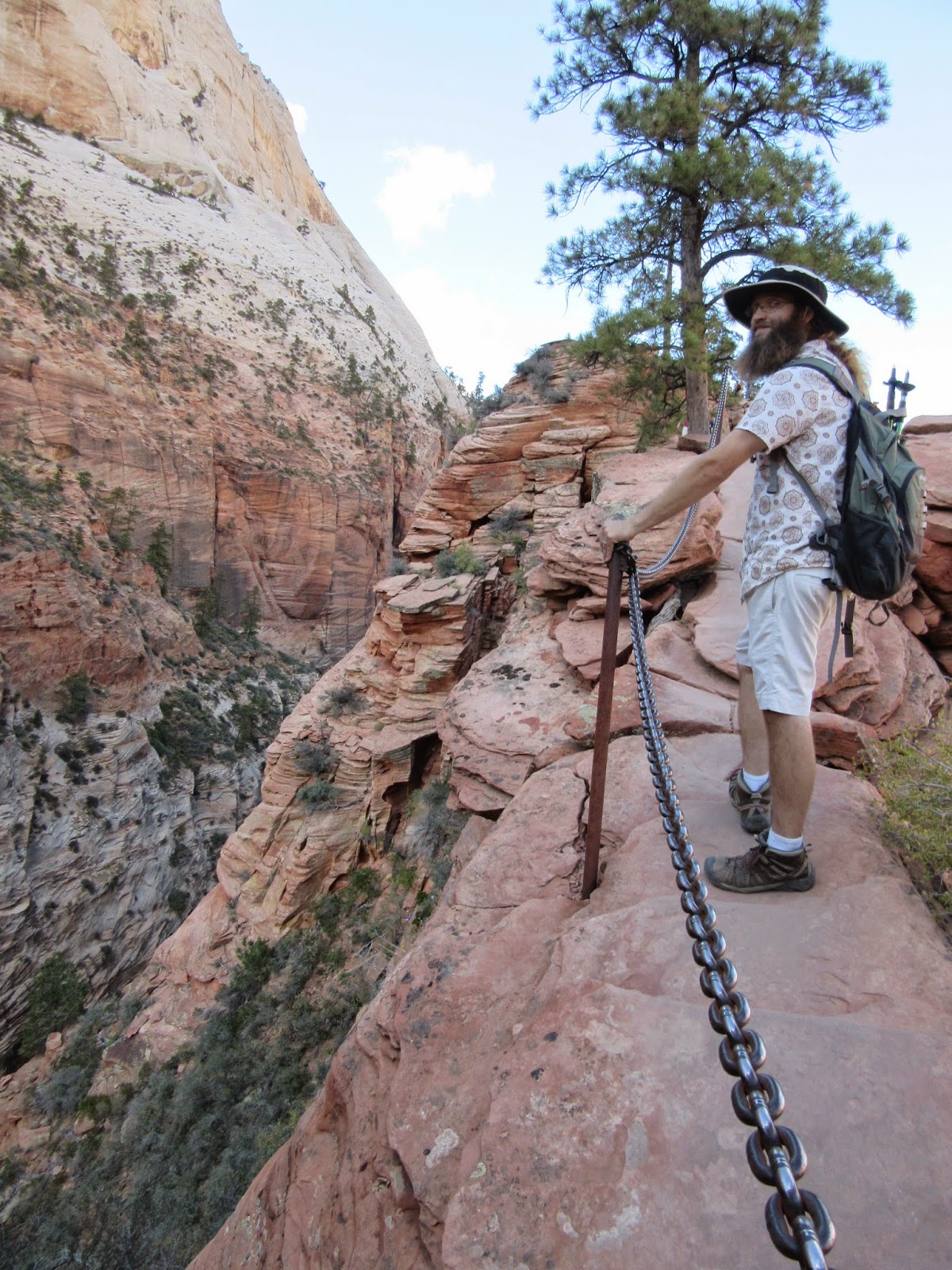 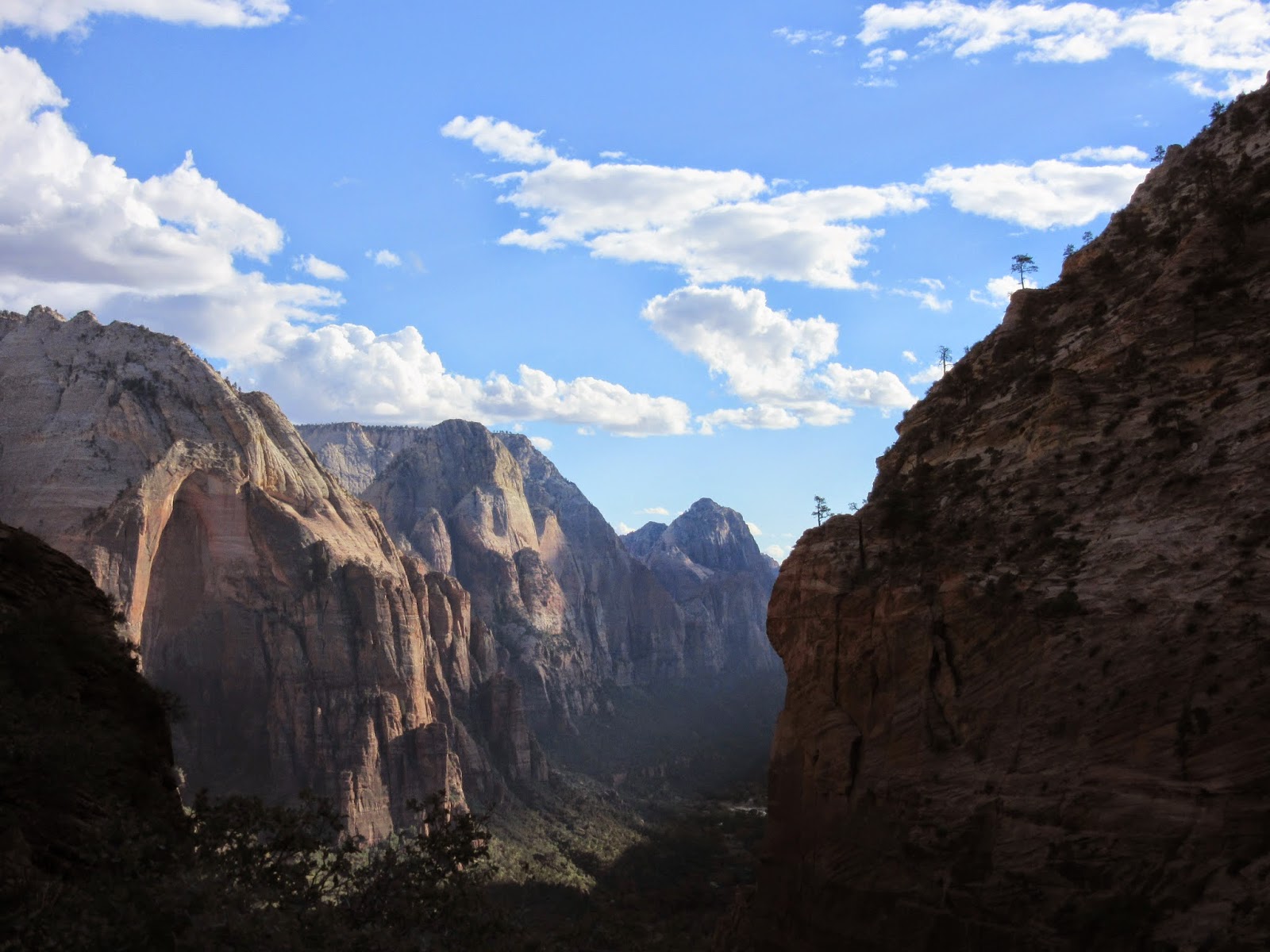 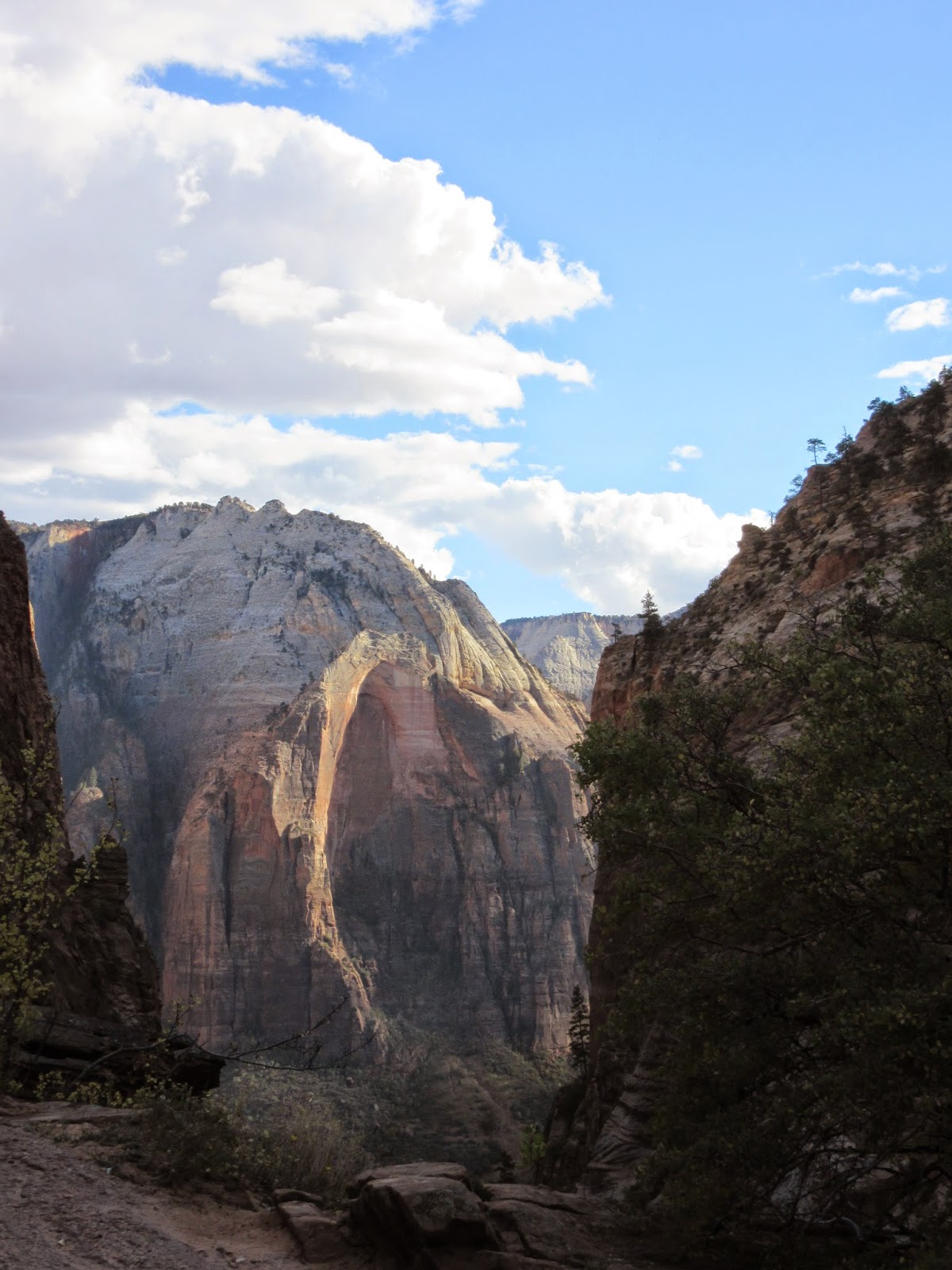 We stopped at one section of trail where it had to have only been four feet wide at most--with nothing save 1000 feet of air between me and the river way down below.  It was breathtaking and surreal.  Walking on the edge, quite literally. 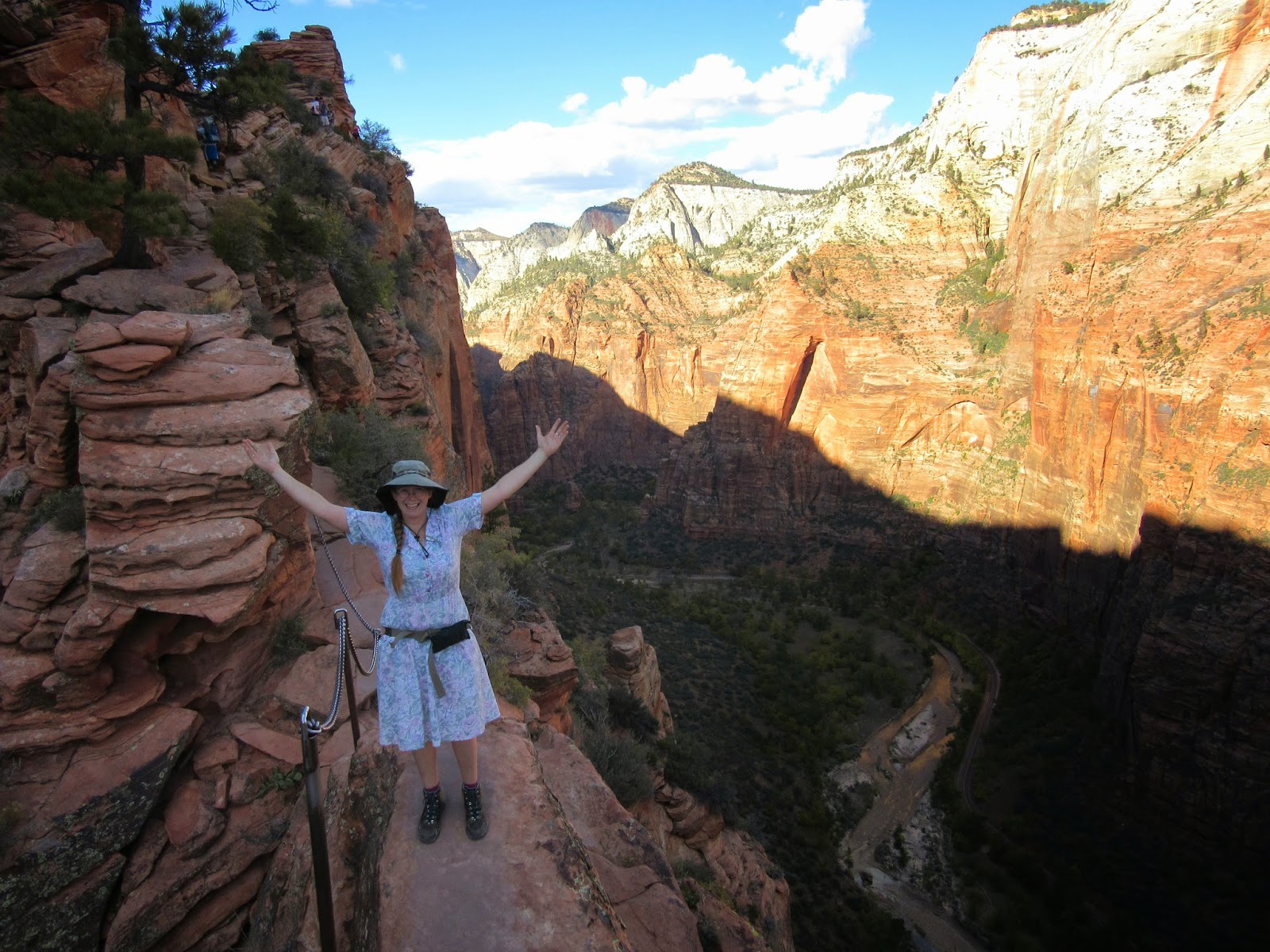 Going back down--which oddly involved a lot of going up and and down, I noted, as the trail wove through the path of least resistance back down--was not nearly as tough as I might have thought.  I've found that with terrain that is quite steep sometimes the decent is just as tricky as the ascent due to the encouraging force of gravity and the strain on knees.  Neither really proved to be the case here, or maybe it was all just so interesting and surreal that I didn't notice.  Soon we were at Walter's Wiggles and again and then back on a fairly flat and wide--much more normal--trail. 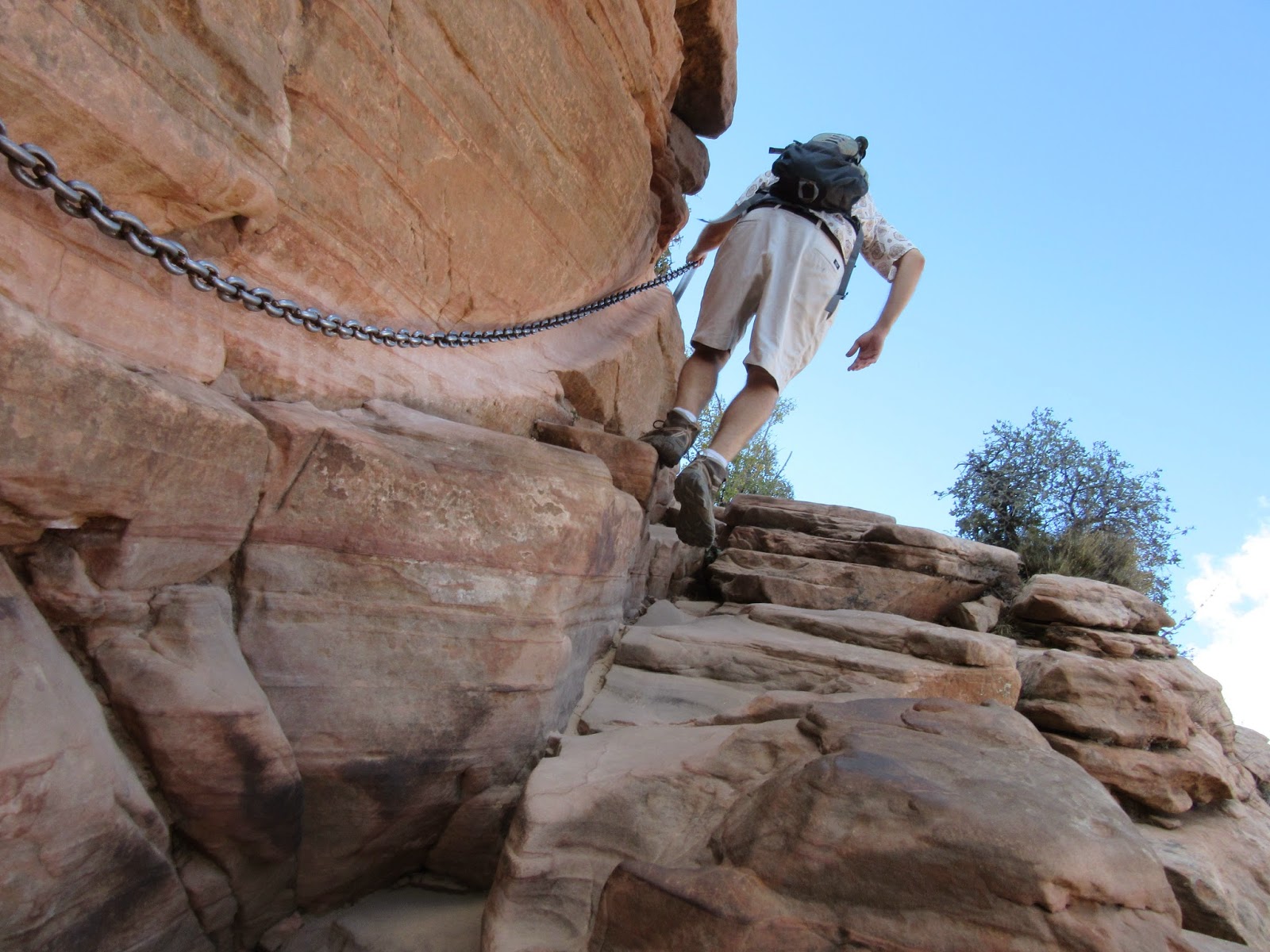 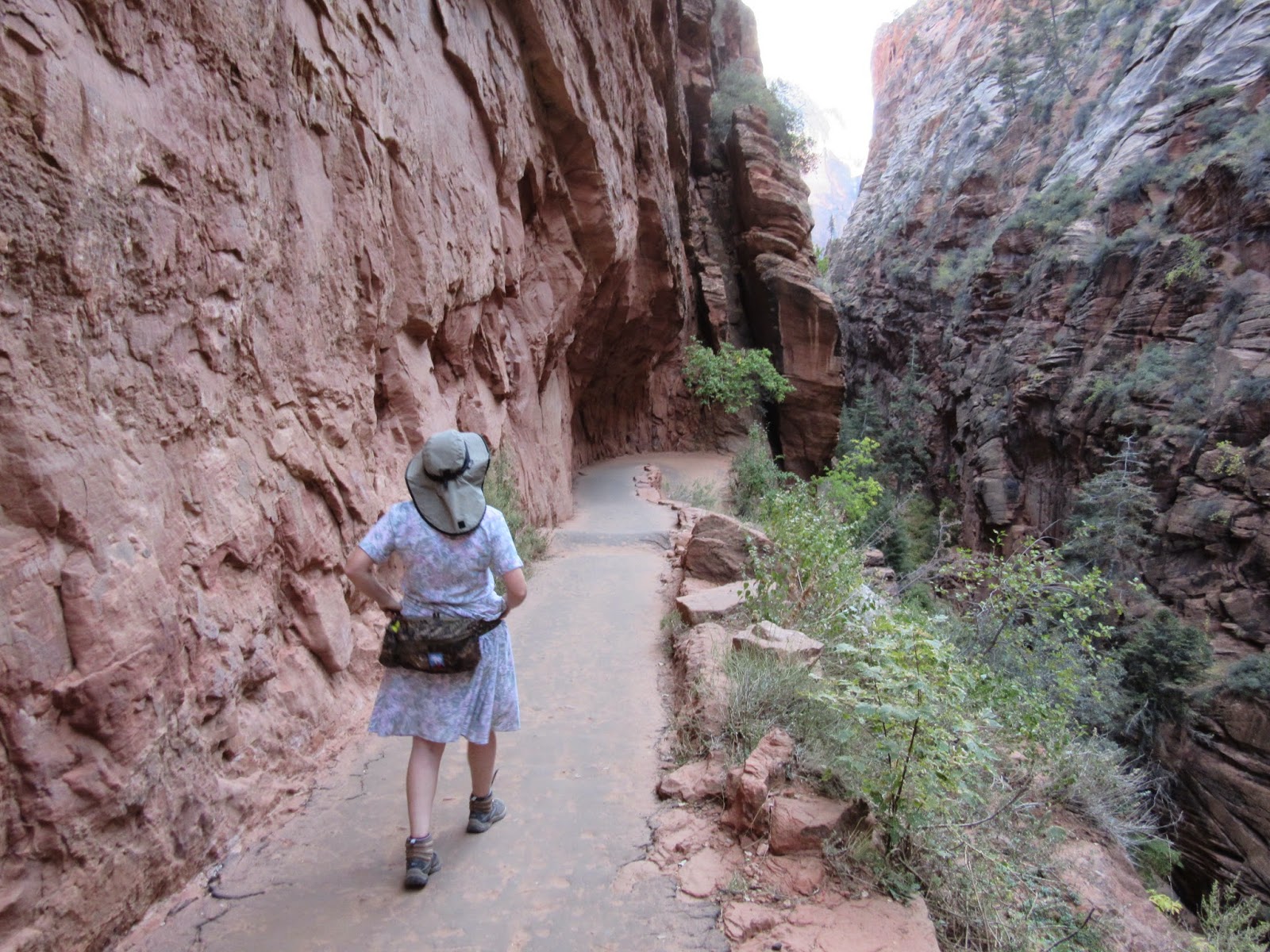 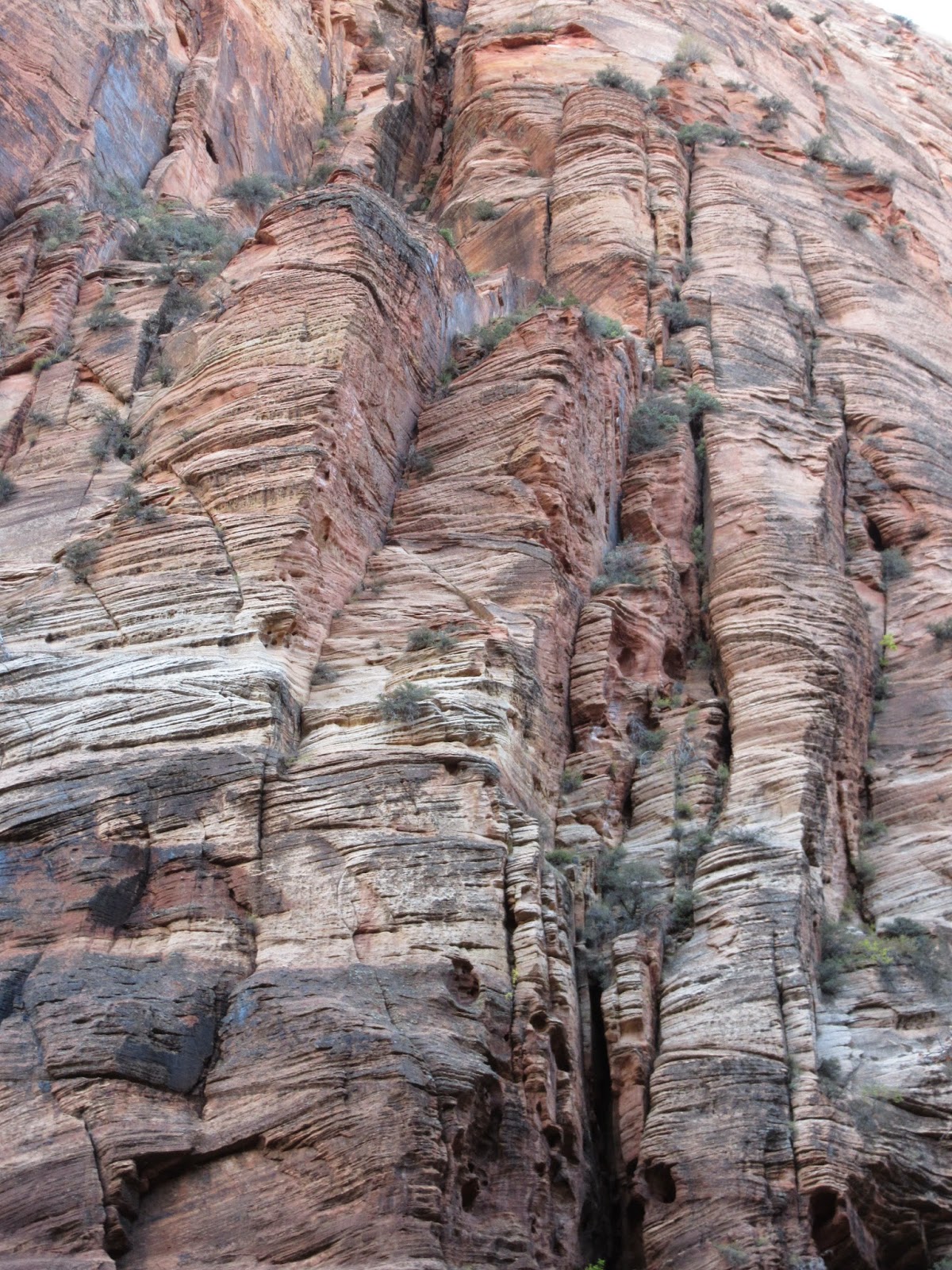 Hiking back down the trail I was surprised by how far up we had climbed vertically.  In distance it was only about 4.5 miles round-trip, but there had been something like 2,000 feet of elevation gain.  I guess the switchbacks worked!  A woman from Tennessee called out to us, "You guys are monsters!" as we passed her on the way down.  Apparently we'd passed her on the way up, too.  We don't consider ourselves fast hikers since we're so often distracted by flowers and birds, but over the course of the megavacation I'd come to think that maybe we are fast hikers after all....at least if there aren't too many birds around. 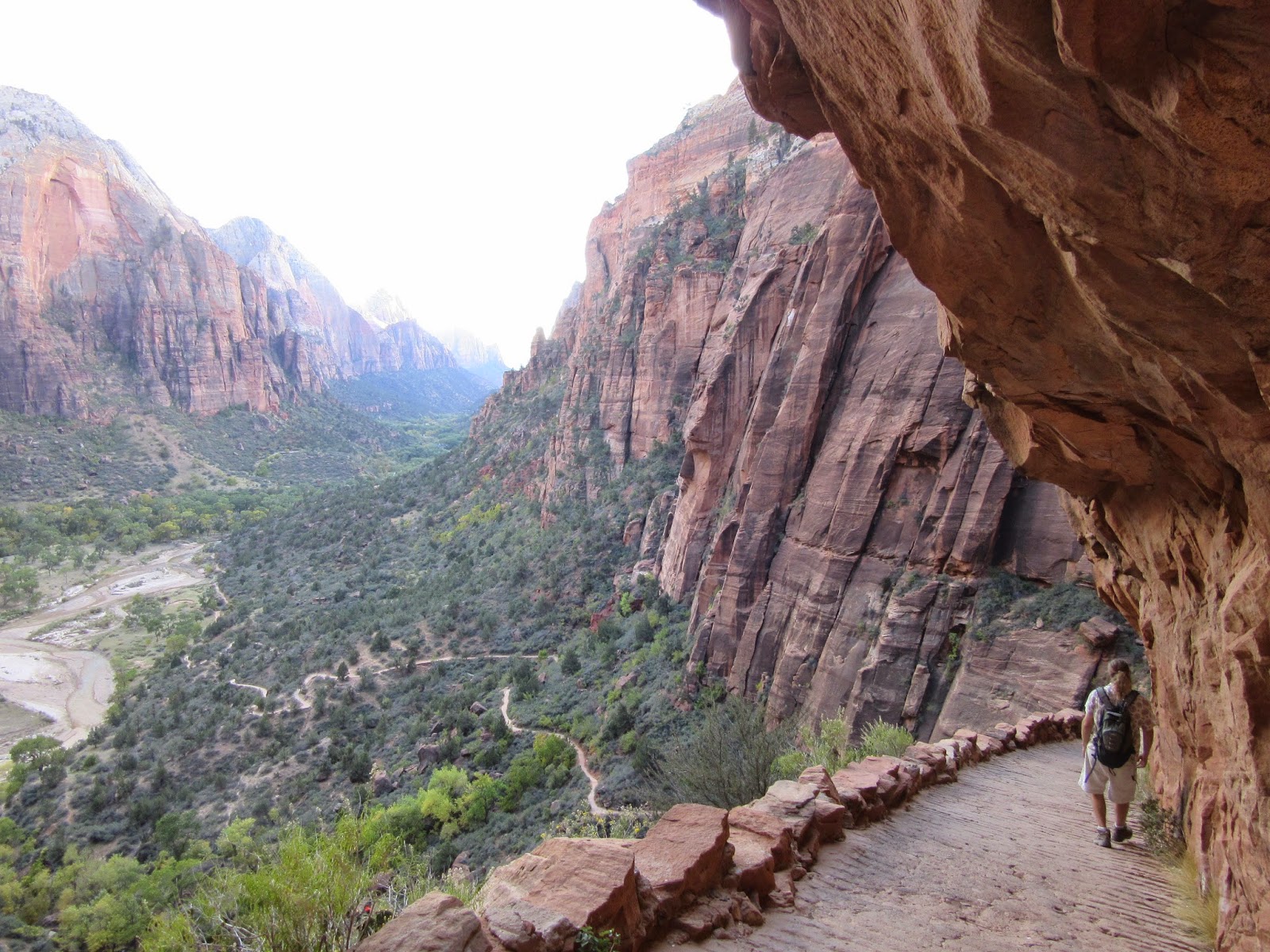 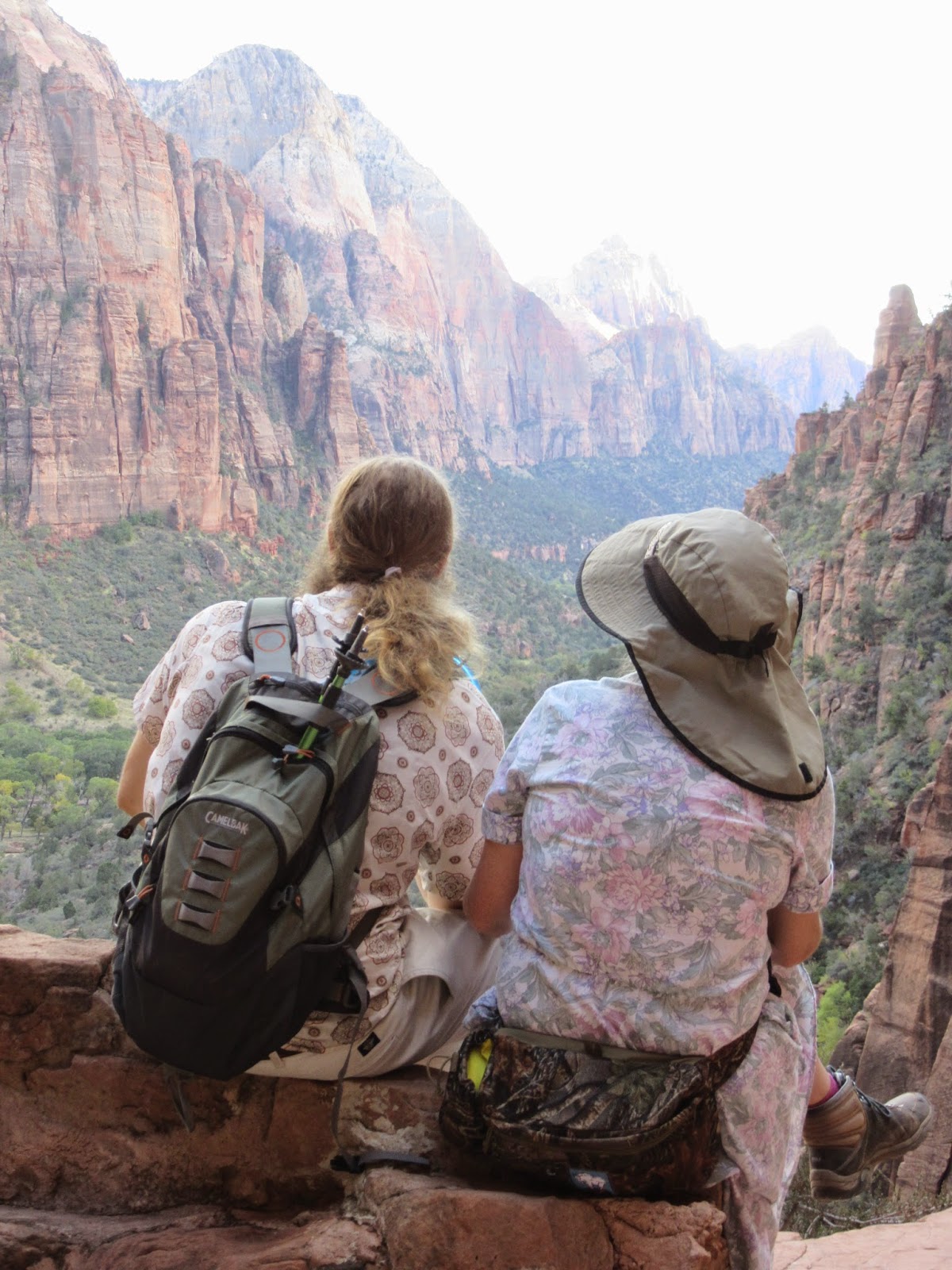 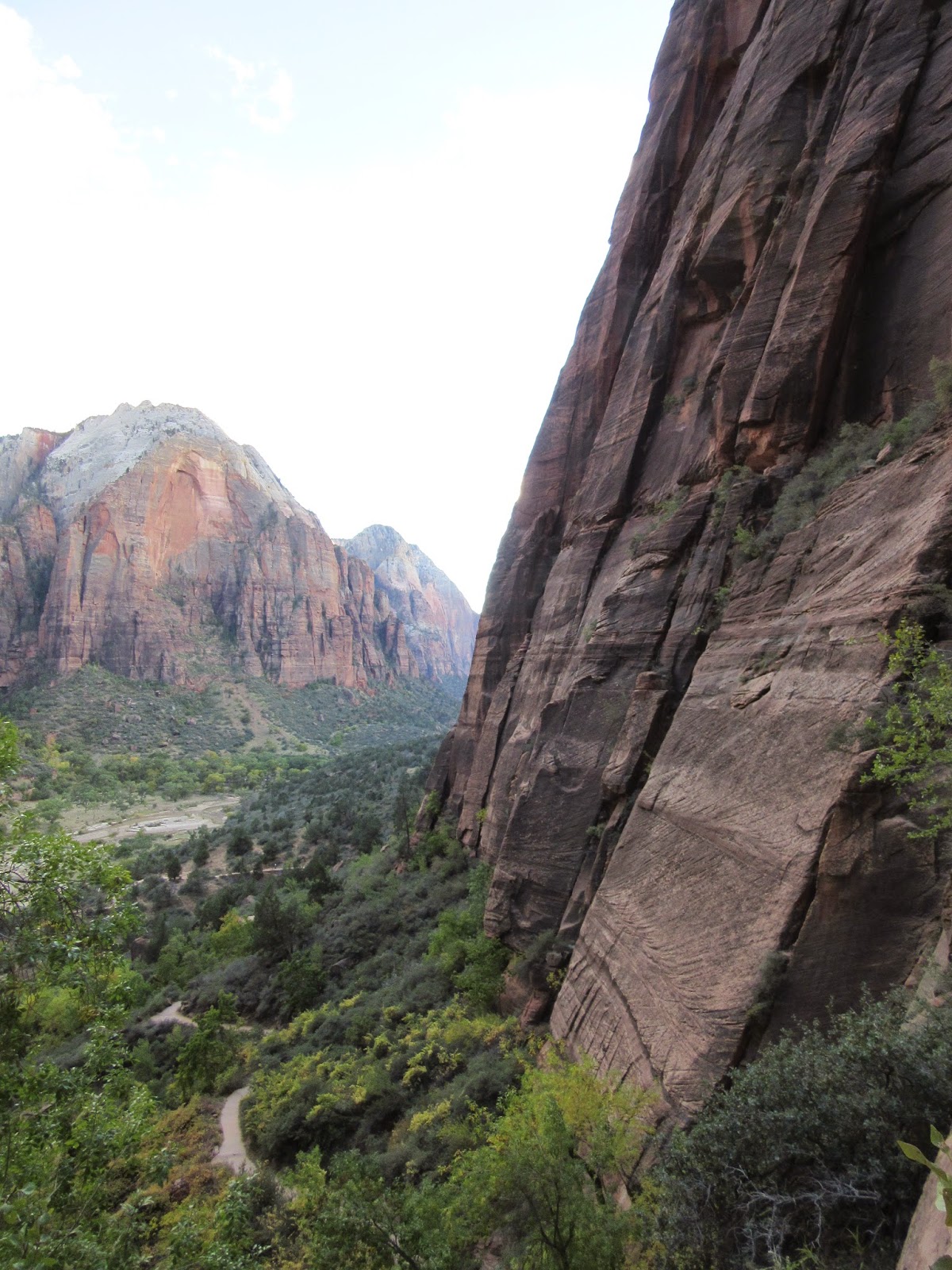 The clouds were just starting to catch that first soft pink hue of sunset and the mountains were brilliantly lit with the late afternoon rays when we got back down to the river level. 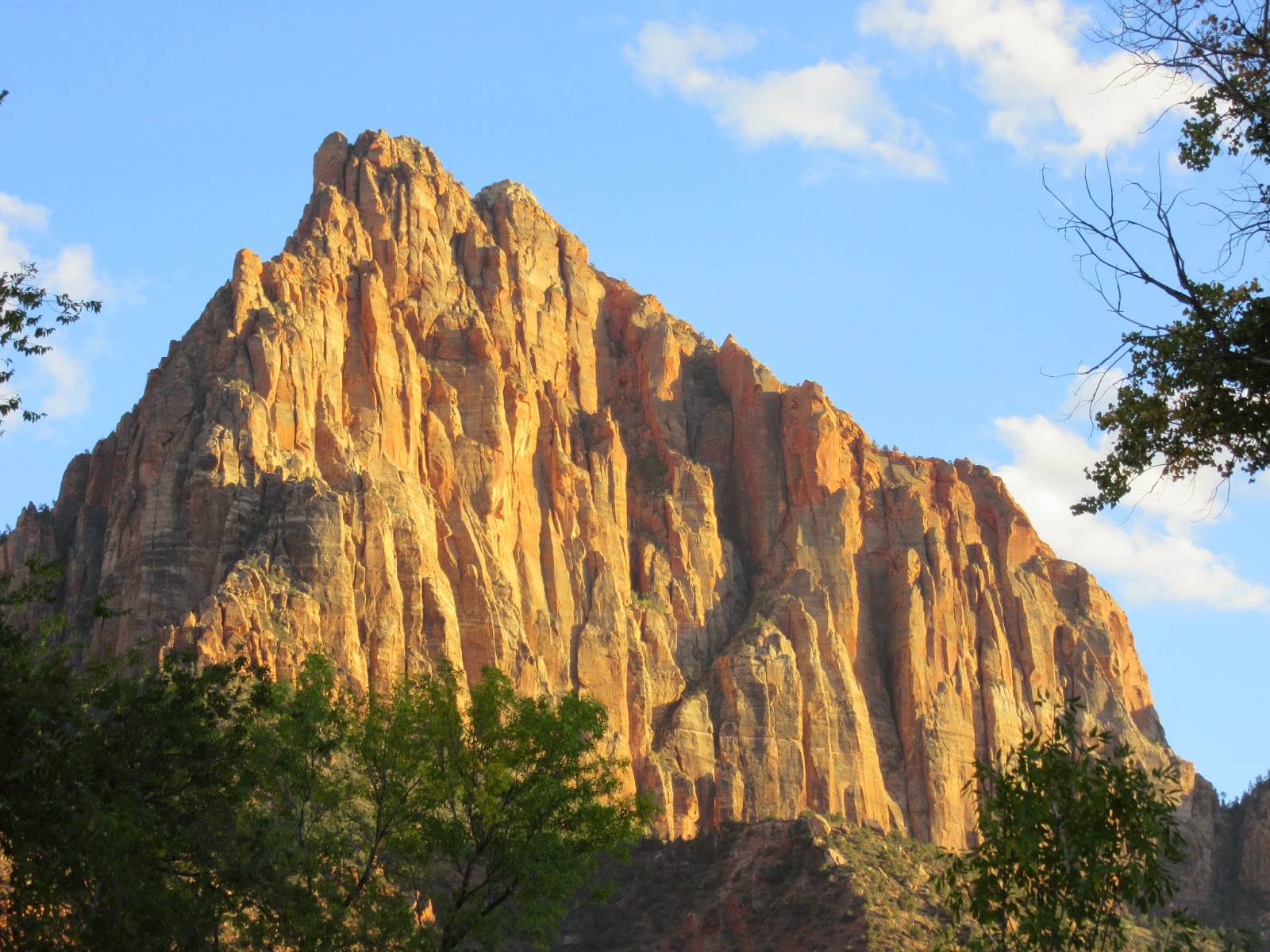 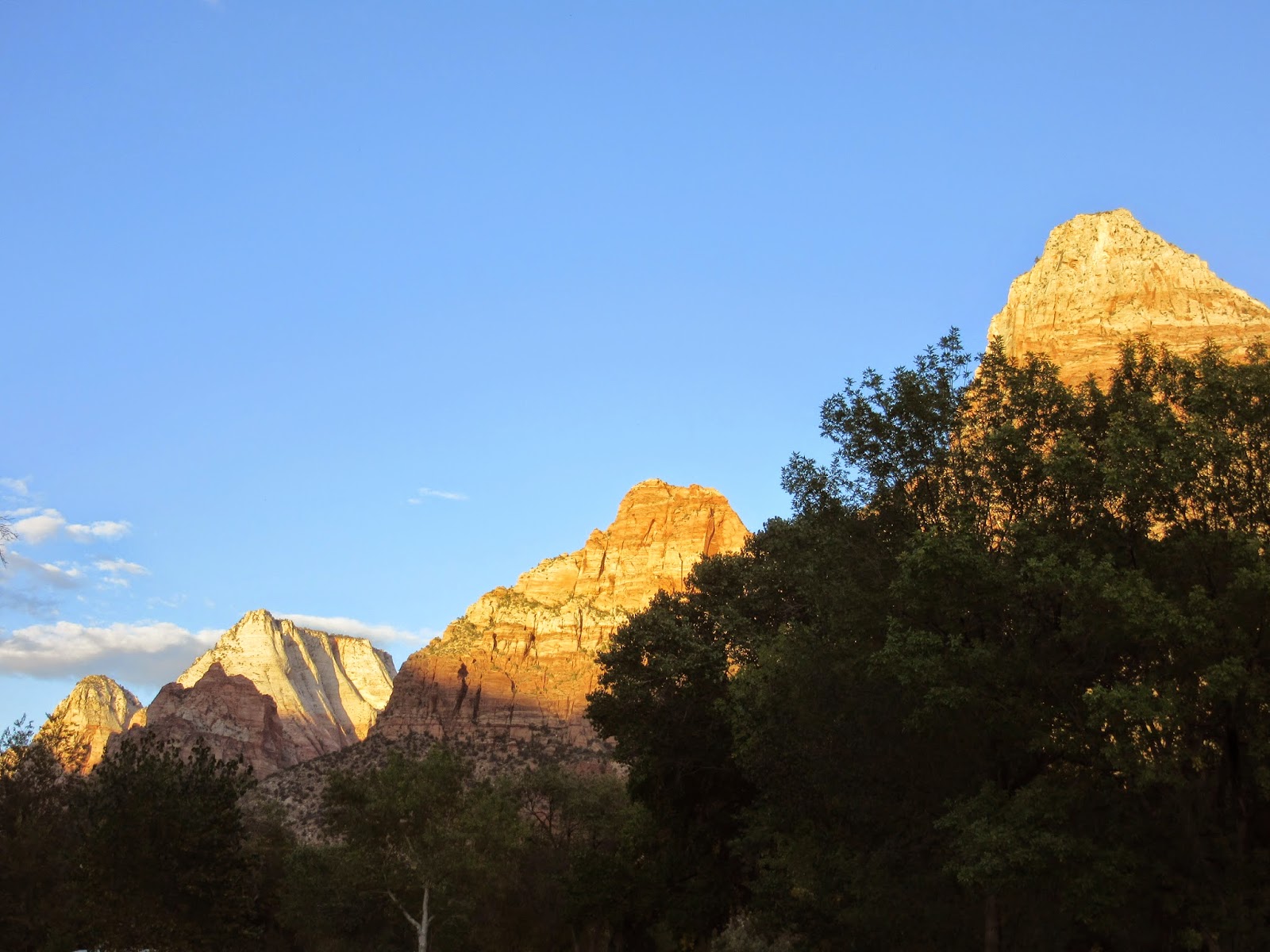 After a delicious Thai-inspired dinner the sun was nearly set.  After the wild Vegas weekend I felt like I hadn't eaten a proper meal in a hundred years.  That spicy pile of veg, chickpeas, and noodles made me very content.  We drank a beer and did some star gazing.  The Milky Way was shimmering like a river across the sky.  It was stupendous.  The whole day was.  It was a magical, expectation-exceeding sixth day.
By BLD in MT