Geysers and Birds Make Me Happy.

We'd planned to hike to the top of a mountain on our last trip to Yellowstone, but the weather didn't cooperate.  Sometimes one just has to roll with it...  We spent an alternately foggy/rainy/snowy day wandering the geyser basin at Old Faithful.  We arrived just moments before Old Faithful erupted actually.  Wonderful timing.  We'd watch it erupt--from a distance--a second time that afternoon.
After stopping in at the visitor's center to check the eruption predictions we formed a plan of action that would culminate in watching Daisy Geyser erupt in about an hour and half.  With that time we took a loop through the boardwalks, stopping at Anemone Geyser first since it is probably my favorite minor geyser.  Anemone is small, but consistent and has very dramatic action given its scale.  The pool was completely empty when we approached it.  Soon though it starts to fill from the hole at the bottom until its quite full at which point it start spouting and spraying several feet high.  After a short bit of this the writhing action of the water subsides and it all drains back down into the hole with a very satisfying slosh.  It fills and drains in a manner that consistently makes me think of a bathtub--though its about a million times cooler than that.  The process repeats about every 7-10 minutes.  Sometimes I watch it several times in a row.  Only once on this trip though.
My video above missed the fill-up phase, but catches the rest of the action fairly well.
After Anemone we continued on the boardwalk past the Beehive and Lion Group and further past Grand and Riverside Geysers to the junction near Grotto Geyser.  It was less than one mile from Old Faithful to Grotto, but with so many things to see along the way--birds, flowers, bubbles, steam, spray, sinter--I was worried an hour wouldn't be enough time to get out to Daisy before she played.

We actually got to Grotto and the nearby Daisy Geyser with plenty of time to spare.  So, we backtracked a bit and continued down the trail to the ever lovely Morning Glory Pool.  Matt and I both adore this pool so deep and colorful.  The wind was right during our visit, too, blowing the steam away to reveal the small aquamarine blue patch deep in the heart of the spring.  This blue is so dazzling.  Its our favorite part.
After our visit to Morning Glory we made our way back the boardwalk surrounding Daisy and waited a while for its predicted eruption.  Some Killdeer kept us entertained while we waited.  They were almost constantly peeping.  One gave herself a little bird bath in a geyser run-off channel.  What a nice warm bath that must have been.  Daisy was almost perfectly "on time" when she started to erupt.  We were once again mislead by the action of the neighboring Comet Geyser which sputters increasingly as Daisy is preparing to do her thing with significantly less warm up dramatics.  We're watching Comet and all of the sudden there goes Daisy.  I think this has happened to us every time.
It started to rain with increasing heaviness as we walked back toward Old Faithful.  We had to take an alternate route back from what we'd planned when a bison decided to take over the path.  There were two paths though so we took the other. 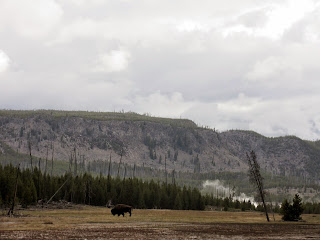 Sometimes one just has to roll with it...
By BLD in MT