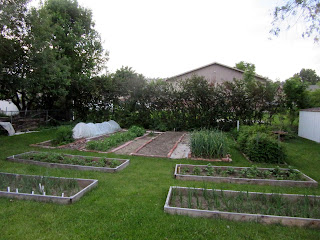 In the increasing summer heat the spinach has bolted (gone to flower).  In the summer craze--with the addition of my being gone for a week and half--it went unpicked much longer than it should have.  We should have gotten it all harvested before they had a chance to bolt, really.  Alas, the ideal and reality don't always match up.  Its all picked now though--the first harvest was May 20th. 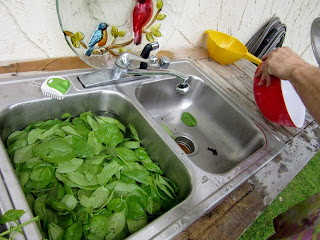 Some of the spinach stalk got huge!  Waist tall and as thick as a broomstick.  In the end we harvested over 11 pounds, almost exactly the same as last year.  Gardening is good that way--its not exact, we never manage to do the exact same thing from year to year, but it all evens out, more or less, it seems. 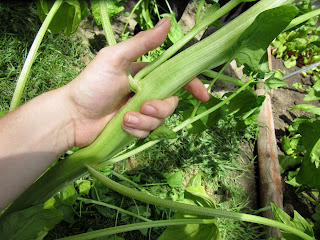 The magnificently attractive and resilient Swiss chard is still going strong--though the front driveway bed is having some leaf miner issues as its uncovered...which reminds me that I still need to write a post about the awesomeness of row cover in dealing with those little buggers.  Another day. 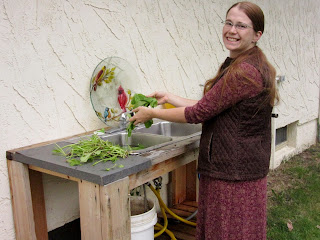 In addition to chard and spinach we had a good crop of bok choy--though like the spinach some of it bolted before we got it harvested.   Its still tasty, but there is more waste (which ends up in the compost so is not really wasted, I suppose).  The slugs also seemed to have quite a liking for it.  No matter.  We just stripped off the usable leaves and have a great big bag of them in the fridge.  There is still several square feet to pick in the garden yet.  I love a good stir-fry and bok choy is a grand addition, in my opinion.  So, there has been lots of stir-frys on our table...like every summer.  (And while they're not greens--but are green in color-- I will also add that a freshly picked pea is another veg I am glad to see in my wok again.) 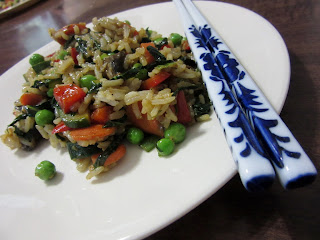 While we do freeze some for off-season use the abundance of greens also encourages us to really eat our leaves!  We've made several quiches--including a couple to freeze.  Green smoothies are a daily occurrence--I was so tickled at how happily my nephew slurped one down, too, telling me you'd never know it had spinach in it other than how green it was.  I have to agree.  Its a great way to eat greens--raw at that.  For vegetarians that don't really like salad (like Matt and me) this is quite a boon. 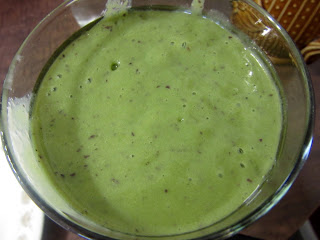 We've been busy-busy, as usual, but still make time to enjoy a little relaxation, too.  After a spell planting and weeding in the sun there is much to be said for a beer and some shade.  These new hammocks are much more comfy than the old Army-Navy surplus models we've always had.  Of course, since they're solid fabric and not meshy they catch all the sap and bird poop from the trees overhead.  Pros and cons to everything... 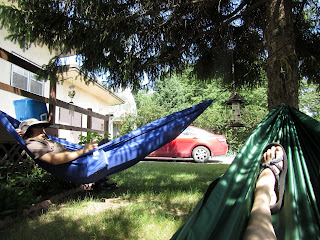