We're in that sweet, sweet spot where just about every meal we prepare is made up of homegrown, fresh-from-the-garden produce--sometimes largely made up of it, in fact.  Its one of my favorite times of the culinary year--though the season of ripe peppers and tomatoes in fall lay claim to being my utter favorite.  I suppose the canned, frozen, and dried bounty that carries us into winter isn't anything to scoff at either.  So, maybe I cannot pick a favorite time of the gardening-and-eating year.  They're all awesome in their own way.

Summer is so very green though and it is delightfully refreshing.  I am always eager for it.  We don't really buy leafy greens.  We eat the heck out of them seasonally and freeze a bunch for later, but don't generally pick them up at the store.  Our garden bounty generally meets our needs--though as a result sometimes we're just about dying for a fresh leaf of spinach come May.  I don't mind it.  I feel I appreciate it all the more on account of the building anticipation. 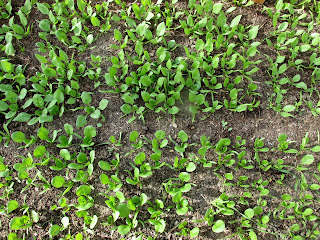 And from that drought of fresh greens--poof--we've got greens coming out of our ears and are trying to keep ahead of them.  Lots of spinach tofu quiches and green smoothies.

And then a week ago we made this six-fold green pesto.

It features spinach, chard, bok choy, peas, and garlic scapes from the 2015 garden tossed with one of our frozen pucks of pesto saved from the garden last year.  It was fantastic and greens never tasted so good.  Yum.
By BLD in MT