This casserole goes back to my childhood--magnificent pizza goodness on a "crust" of spaghetti noodles. 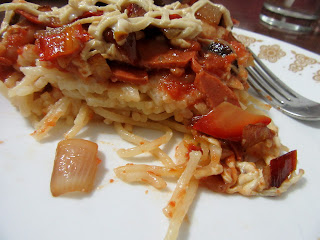 I'm not sure either of my parents actually like to cook. They both can cook, of course, but I wouldn't describe it as a hobby or interest, really, for either of them.  Eating is one thing.  Cooking is another.  Until I met Matt that was how I felt about things, too.

My parents got divorced when I was in 5th grade.  Since that put my dad in the position of cooking dinner a few nights a week he had to build up his culinary repertoire.  It is from that time period that I have my first memories of the heavenly concoction that is Spaghetti Pizza Bake.  I remember eating it at my dad's first (post-divorce) apartment.  I also remember lots of greenbean casserole topped with tatertots from that kitchen, too.  Those became his specialties--at least in my mind. 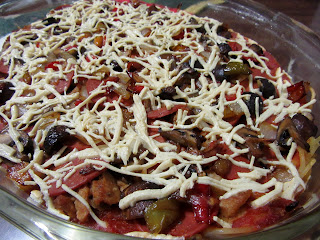 Last year these yummy youthful memories inspired me to ask him for the recipe.  We've successfully enjoyed it loads of times since.  It is just as good as I remember.  Like pizza and spaghetti had a beautiful and super tasty baby.  Of course, I am an admitted pizza freak so take that bias into account.

My dad got the recipe from one of those church and/or community cookbooks and it is as vague as all get-out.  Here, I'll show it to you.
The first time I attempted the recipe I pulled a box of spaghetti from the cupboard--16oz.  "Hmmm, do you think that'd be a big box then?  So, maybe half for a 'small' box?  I'll try that."  It makes me laugh a little, the vagueness.  Honestly though, it is pretty much perfect.  It is a totally flexible recipe.  Put however many pepperonis on it as strikes your fancy!  Use as much or little cheese as you like!  I mean, it is pizza for heavens sake!  Go nuts!

With all that for preamble, I present the veganized and slightly more detailed recipe.