A New Look for an Old Couch

In all likelihood we "should" buy a new couch.  (And by "new couch" I mean a nice used couch.)  But, Matt and I like to do things in our own way, of course, so we didn't buy a new couch.  We just found a workaround. 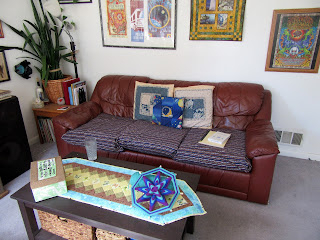 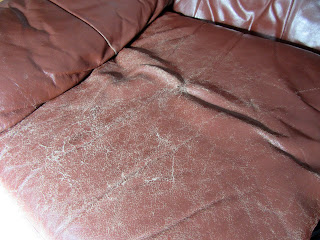 The cushions are now splattered with holes, the leather worn thin by the countless butts to sit on them.  We flipped the cushions over when the holes first appeared, but eventually both sides were shot through with holes and that stopgap became decidedly less effective. 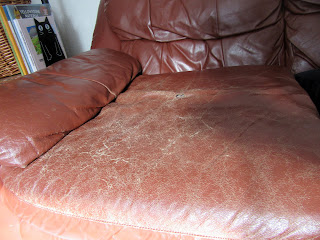 That was a real shame, too, because the couch in question is comfortable as all get out and the rest of the leather is still in fantastic condition.  Just look at the difference in color between the arm/back of the couch and the seat in the photo above! 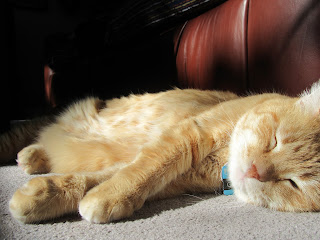 This lead to a what-should-we-do-about-the-couch conversation.  We didn't want to throw it out since that seemed like a real waste.  I mean, what a huge piece of garbage to toss into the landfill!!  Egads.  I just hate to think of it.  At the same time is is not like we could sell it or give it to charity, given its condition.  It hardly even seemed worth offering for free on Craigslist or something like that.

Besides, if we replaced it who knew if the new one could come close to being as comfortable.  So, I decided to try making new cushion covers instead. 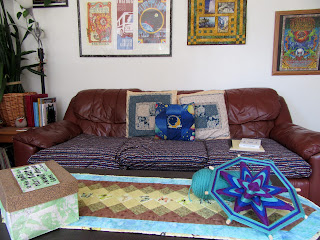 After a trial run with some black fabric (which didn't match the look and showed the cat hair horribly) I found some fabric in my stash with a rusty brown that matched super nicely!  I have a dress made from the same fabric and so now I can be totally camouflaged sitting on the couch, too.  This is silly and, I must confess, makes me smile. 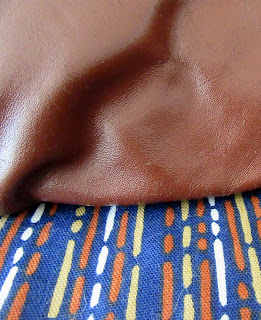 I will only briefly mention the absolute Beth-fails-at-math-spectacular that came about during the construction of these new cushion covers.  After the, oh, seventh measuring error I was surprised at my ability to still laugh at myself.  It was absurd.  One of the covers is now pieced together from about five bits of fabric...though I do think the original piece would have been big enough, you know, if I wasn't such a scatterbrain when it comes to planning and measuring.  Numbers aren't my strong suit, but perseverance might be.  So, all is well. 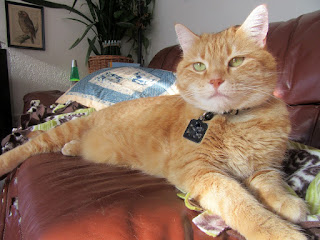 Matt and I both like how it turned out a great deal, as do the cats.  Of course, this is really just another stopgap--postponing the inevitable--but this old couch has life in it yet and that makes this project very satisfying to me.
By BLD in MT