Earlier this week, though it seems nearly impossible for me to believe, the Universal cosmic dance came 'round again, heralding the magic of spring.  As I was cycling to work through the blue-skied sunshine it really felt like spring, too. 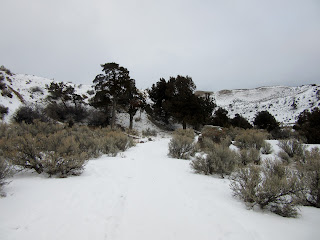 There are plenty of reasons I am always a little giddy about spring--baby birds and bunnies in the yard, bright spring blossoms popping up here and there, fresh garden spinach in our breakfast smoothies.  (Sidebar:  I can't wait to try a fresh picked spinach salad.) 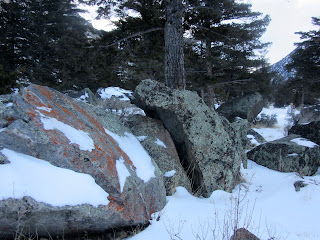 Camping is the thing that gets me really hankering for spring though.  I'm always chomping at the bit to get back out under the stars.  As such, Matt and I end up in Yellowstone earlier and earlier each year, so it seems.  I just love the shoulder seasons in the park.
This year we decided to break out of our comfort zone all the more and try a little winter camping.  We'd certainly been snowed on during camp outs in the borderlands of spring or autumn, but we'd never actually set out to camp in the snow before. 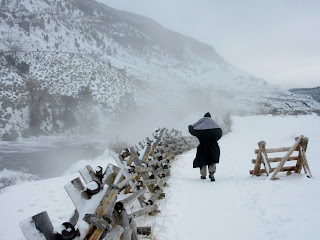 Previously we'd kicked off our camping season as early as late March, but feeling ambitious and well equipped we thought there was no reason to wait (or make a daytrip of our soak).  So, we headed for one of our favorite forest service campgrounds located just outside of Yellowstone National Park for an overnight in late February.
The primary motivator for this winter camping expedition was actually the Boiling River as we've set ourselves a goal of making a trip once a month this year.  We wanted a good soak, maybe a couple good soaks, and so decided to give winter camping a try in order to maximize our soak time.  It was so spectacular, too, that I cannot believe we've not spent more time in the wintery woods. 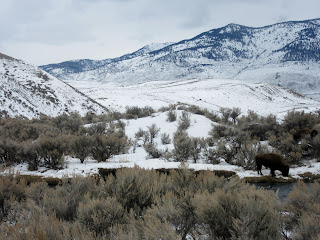 We were only in the area for 30 hours or less, but spent a good nine or ten of those hours soaking to our hearts content, going both Saturday and Sunday.  It was surprisingly busy at the Boiling River, given it was a 20 degree day, especially on Saturday--though that stands to reason, I suppose.
Walking into the river wasn't bad, being in the river was heavenly, walking out of the river was a bit brisk...and then while trying to change out of my wet swimming suit there was about 30 seconds where I thought I might die of coldness....but it was mercifully brief.  As we walked back riverside to the parking area I was completely comfortable in my warm, dry socks and fluffy bathrobe. 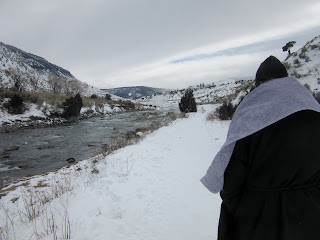 Back at camp things were all the more glorious.  We had a big fire and Matt made nice kettle of warm soup and fresh flat bread baked right on the flames.  We watched the stars and talked and drank tea and spiked hot chocolate.  It was still and quiet and lovely beyond words.  The moon on the snow was surprisingly bright.  I made notes in my journal about the day while diligently drying my suit at the fireside.  (I couldn't bear the thought of putting on a literally frozen swimming suit for our Sunday soak.)
"Two meditations on the wind:  A saturation of small sounds.  Surety, certainty seen as invisibility."
"Temperature and comfort are fairly relative, but are often at least partially within our power to change." 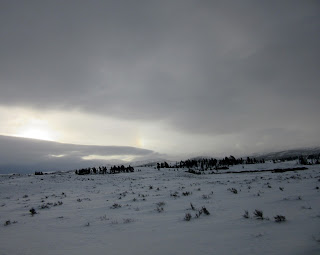 "Wind and water are unfathomably strong forces."
"Be in the now, especially when things are amazing and worry less about unpleasantries you know or think will come." 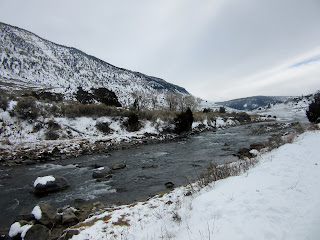 We woke fairly early on Sunday as Matt was damp all over.  He didn't have a sleeping mat, as I did, and so had melted the snow beneath the tent with his body heat.  He kept scootching closer and closer to me on my (tiny) mat.  Meanwhile, I was toasty warm and dry all over.  I can't say enough great things about our highly cuddleable and snuggly-warm double sleeping bag.  Plus, I'd slept in my down coat, too.  Everything was frozen to everything--the tent to the ground, our bag to the tent...
We parted with tradition and neither made breakfast nor broke camp.  Since Matt was damp and chilly we skipped right on to the next step in our plan--heading straight for the Lamar in the hopes of seeing some more wolves.  We didn't have any luck there, but encountered plenty of other critters and had a lovely morning drive none the less.   Bison and Bald Eagles were out and about in noteworthy numbers.  We learned that the snowplows just bang their blade against the ground to get the bison to move along.  I'm not sure how I feel about this, since it clearly disturbed them and I make it my general practice not to disturb wildlife.  Still, the plow had work to do so.... 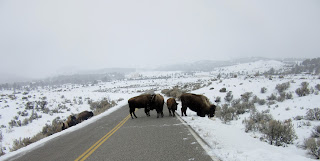 We stopped for tea and breakfast (more nann!) at the Yellowstone River Picnic Area where it took the ravens significantly more time to find us than normal.  They must not hang so nearby when the lunchtime tourists are less plentiful. 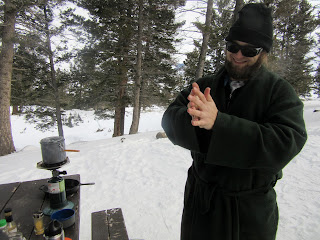 We retraced our driving route and enjoyed our second soak before striking camp and heading home again--jiggity, jig!  I didn't even really feel like I might die of cold that second time either.  Thank heavens I was able to get my suit dry... 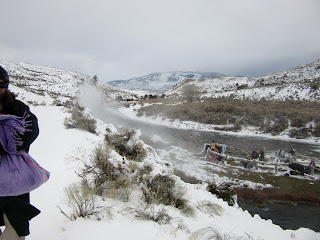 It was a delightful new experience, this winter camping.  I quite liked it. 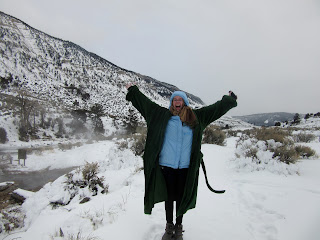