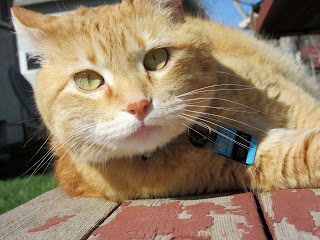 Backstory:  Ginger killed us a baby bunny last week.  Matt and I had interestingly opposite reactions to this increased level of predation.  When I opened the back door to let her in and saw the tiny lifeless fluff ball laying there at the bottom of the steps I said something like, "Awwwwwwww, Ginger!!  Not the baby bunnies...  That's not a vole.... Man....tisk-tisk."  Matt on the other hand praised her resoundingly.  "Oh, what a good hunter kitty!  Yes, she's such a good kitty.  Anything that moves out there is fair game.  You get 'em."  It was interesting. 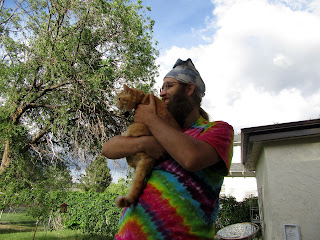 I guess Matt was seeing the bunny as one less budding garden pest to contend with.  I saw it as a harmless little baby who'd been killed for no reason. 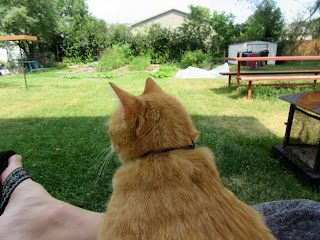 Ginger had never caught a rabbit before.  More voles and mice than I could keep track of in these four years and two birds (until I thoroughly discouraged her of that--and she likes to keep me happy.)  The bunny thing was new--and I'd hoped a rarity. 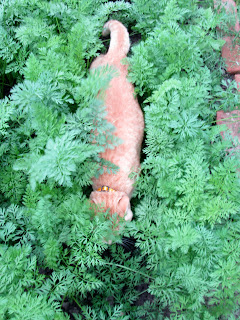 Which leads me to my morning dilemma. 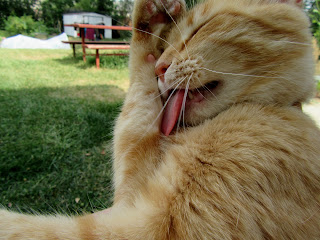 I called Ginger to come in because I needed to pedal off to work, but she was so deeply involved in hunting by the shed that she ignored me.  Our mower needs sharpened and so it is a veritable cat jungle out there.  She is eating it up, stalking through the tall grass.  It being a nice day and that she has both shelter and water out back I decided I'd just let Ginger kick it in the yard all day.  Hunt to her little heart's content and then bask in the sun.  But, I checked out the back window a second time just as I was about to leave and she was sitting there.  Looking up at me expectantly. 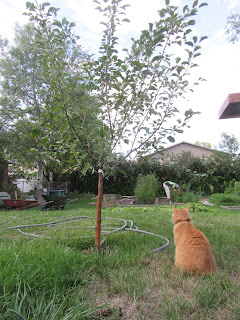 Perfect, I thought.  She will come in now after all.   But, oh, no....that wasn't it.  She'd turned up by the steps because she brought me another little bunny.  This still very much alive fluff ball had presently escaped Ginger and was cowering under the barbecue grill. 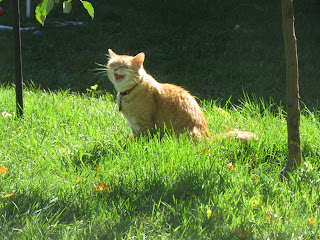 I waffled.  Do I leave her outside to finish this?  Do I bring her inside like I'd intended and save the bunny? 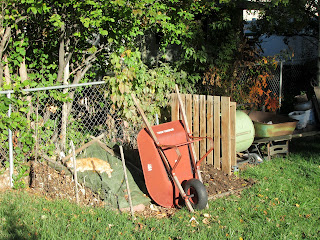 Ginger's body was tense and intense with the thrill of the hunt.  She chased the rabbit back and forth a few times from one end of the grill to the other.  The rabbit was clearly terrified.  And so small. 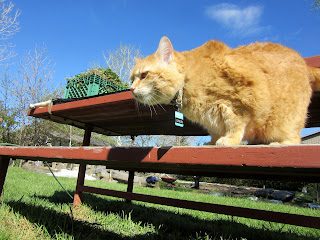 So, I used my human powers, for better or worse, and intervened.  I lifted Ginger up and brought her into the house with me.  I immediately started second-guessing the appropriateness of my actions.  I gave Ginger an excessively large pile of treats as a consolation prize.  Which was dumb.  Animals died to go into the treats, too, so why is that different/better than letting her catch a bunny? 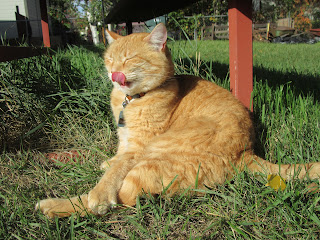 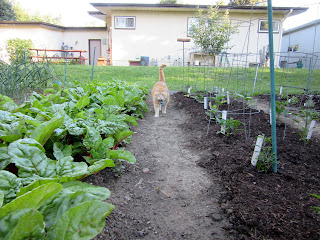 It doesn't make sense.  But, at the time, looking at the baby bunny quaking and cowering in the face of sharp, vicious death, there didn't seem any other choice for me.  My empathy is unreasonably overdeveloped.  I have always more easily imagined myself as the bunny than the cat, the gazelle than the lion.  This is why I choose to eat/live the way I do.  I don't want death and suffering on my hands, or done on my behalf, if I can avoid it.  But apparently it is different with the cats.  Say, the treats.  Or the fact that I know they'd prefer fresher food--fresh chicken and fish.  But I cannot bear the notion of preparing such food for them.  I prefer the kibble, safely remote from the animals therein. 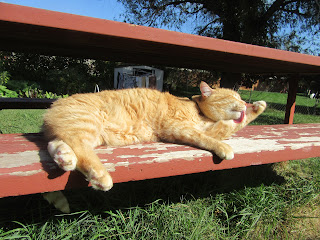 And just when I am convinced I did the wrong thing the pendulum swing back into uncertainty. 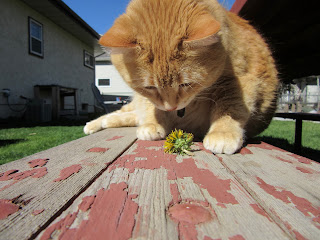 Ginger is not a lion.  She is an well-kept and pampered invasive species that I personally introduced into the backyard biosphere.  The cottontails are the native species here.  We could put up a chicken-wire fence around the garden to keep the rabbits out if they truly become a problem, but they never have been in past years. 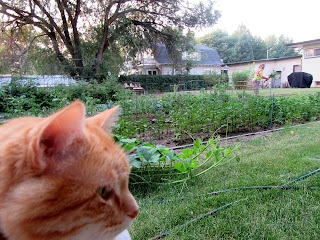 Plus, she didn't even eat the first bunny she caught.  Just killed it and left it on the step so she could go out hunting again.  She only eats a minuscule amount of the animals she kills.  It is pleasure hunting.  Instinctual hunting.  The same drive that make her chase string and balls around the house.  If Ginger was actually hungry and ate her kills that would be a totally different story. 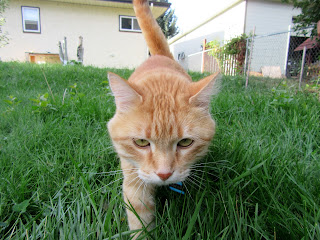 I couldn't stop thinking about it the rest of the morning. I finally turned off my audiobook as I kept having to rewind over and over and over as my mind wandered back to the morning's dilemma.   When the cats moved in I expect they would bring challenges to my mostly-vegan way of living.  They are predators and I would never suggest they be forced into a herbivore's existence like mine.   In many ways wish I could just fully embrace my omnivorous place in the circle of life.  But, I can't.  Or won't.  I love all things natural...but distance or remove myself from the cycle of killing and death because it makes me uncomfortable.  It is a double edged sword. 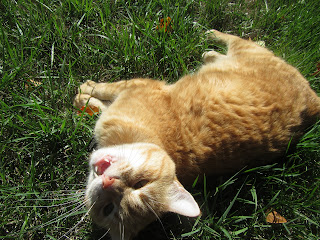 I came to a double edged conclusions, too.  I believe I did the wrong thing in saving the bunny at the intellectual level.  On an emotional, spiritual level my heart feels good and says it was the right thing to do.  Gall dang, that is the disparity that makes my life tricky sometimes. 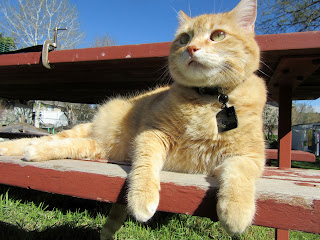