We picked all the peppers, eggplants, and tomatoes (except those in the greenhouse) over the past few days.  Most of the tomatoes are still green, but we'll ripen them indoors.  We dug the last of the potatoes and our small crop of carrots and pulled all the old bean vines. 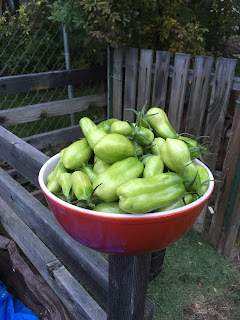 I haven't written much about the garden this year.  Honestly, that's because I haven't thought much about it either.

Our spring was so bizarre.  I felt like we were living in the pacific northwest there for a couple months.  So much rain!  There are pros and cons to this, of course.

We got a slow, slow start to the season.  Seeds that were planted in the earth took forever to sprout.  We were also a little behind starting our seeds indoors...and the weather outdoors really didn't help them make up for lost time once the seedlings were transplanted out.  The eggplants especially failed to thrive.

On the other hand, the garden basically watered itself, which was handy.  We enjoyed a long spinach season and our herb and berry crops were off the charts.  We still have lots of jam from last year so we just ate and ate and ate those berries.  Mmmmm-mmm-mm--good. 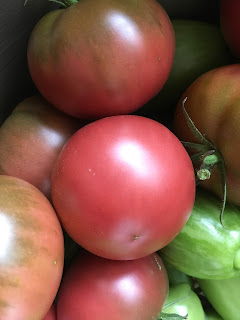 The weeds and grasshoppers flourished in the moist conditions--though the grasshoppers didn't bother us nearly as much as some other folks we know.  Ginger thought they were great fun to hunt.  We also only got minor hail damage this year while many of our friends had their gardens thrashed.  All of Montana--including my front yard--was abloom in brilliantly yellow clover for months.  Our spring roadtrips were a blur of golden roadsides.

We traveled boatloads over the summer, as we are known to do.  My mom says, "Are you ever home?"  We are.  During the week.  Sometimes on the weekends, too.  😄  But, with autumn here and winter soon upon us we'll be staying home more and more.  The garden has to thrive on neglect mostly, since we're gone so much.  We are grateful for April who watered for us on two occasions in which we were away for a more than a week at a time.

We feel our greenhouse gardening is ripe with promise, if not fully dialed in.  We learned quite a bit this year--what to grow where and when--and enjoyed the early start to our garden season.  Next year we will make even better use of the space.  I already eagerly await the off-season clubhouse parties though. 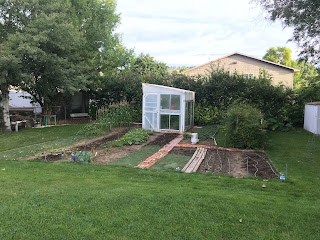 We planted some grape vines along the front fence--I call them my "grandma grapes" because they were purchased with a giftcard from my late Grandma Fran--and they're fruiting for the first time.  One of the young apple trees also fruited well, though the apples are a bit dented and bruised by the hail.

We upgraded our watering system, making drip irrigation from some old hoses we had.  Since we've got ditch rights we can just let the slow steady drip do the watering for us.  This is something I've wanted to make happen for Matt for the last two years.  Watering is probably the most time consuming bit.  As with the greenhouse, I suspect we'll figure out the best strategy here with a couple seasons of practice, too.

Another success was Matt's garlic project.  Maybe I've mentioned it, maybe not.  He got some advice from the "garlic guy" at our farmer's market and hatched a scheme last year that involves growing garlic rounds to re-plant each year for the next crop (as opposed to just planting cloves from the heads of garlic).  Apparently rounds make for bigger cloves.  You get rounds by planting these little garlic bulbettes that some plants make.  Plant a bulbette, get a round, plant the round, get bigger cloves and more bulbettes.  Honestly, I am still not 100% on the details, even though I am sure Matt's explained it to me.  I probably garbled it.  Either way, he grew some huge garlic.  Garlic so big that when a recipe calls for five cloves we only use two.  Apparently it will be even better next year.
We weighed almost nothing we harvested.  We recorded the most meager of notes in the garden journal.  We took it easy.  We still ate potatoes and carrots which taste of the earth.  We still enjoyed our tender, thin-skinned eggplants and jewel colored red onions.  We still have flowers bringing the bees, butterflies, and birds to visit.  We still enjoyed the fresh air and sunshine.
By BLD in MT