I have mentioned before how I believe Matt has far greater confidence in my ability to sew than I do.  Its a good thing really because he challenges me to challenge myself.  I can sew, but I am not an avid seamstress.

Like most things in my life I have to feel there is a genuine need and/or purpose for what I create.  I want it to be practical creativity.  I think there is a historical basis for this if you look at the handiwork of women throughout history.  That is why I like to knit dishcloths and draw posters to trade/sell at concerts.  That is why I garden vegetables more than flowers.  That is why I sew things like aprons, underpants, and skirts.  I don't want to create stuff just to be making stuff, no matter how pretty it is or how "cute" of an idea.  I have to need it or have a purpose in mind for it.  As with seemingly all rules, there are a few exceptions to this rule of creative practicality.  Ojos de Dios are not really a useable, purposeful craft, but I like to give them as gifts....so I guess it is.  The dancing cloak is a questionably unpractical sewing project.  I mean, it is warm and I do wear it, but not too regularly.  Mostly it is practical on cool evenings at music festivals.  Other than that....well, its practicality is up for dispute.

I mend Matt's work pants.  I darn socks.  I attach lost buttons.  I make simple curtains for naked windows.  Stuff like that mostly. 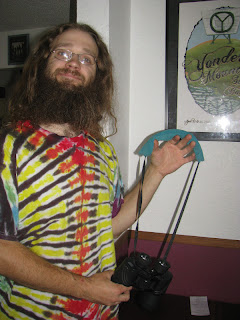 Not too long ago, after the first weekend in Yellowstone actually, Matt asked if I could make a pad for his binocular strap.  His binoculars have a very thin strap, maybe 1 cm wide, with no padding whatsoever.  After a day of birding it really started to bother his neck.  So, I said I try.  That is what I always say.  I never know if I actually could make the product in question until I try so that is the only honest answer to give when he asks these things.

As it happened, my aunt had recently given me a box of sewing miscellany that included a rather small chunk of batting that I had initially considered too small to really be worth much.  (Little did I know.)  So I took a square of that and, folding it doubled, wrapped it around the part of the binocular strap that rides on Matt's neck so there was a double layer of padding on each side of the strap.  I took a needle and thread and basted the batting in place.  I then cut up a threadbare corduroy shirt of Matt's that I'd had in my stash for....oh, probably four years... to use as the cover for the padding.  This shirt had been one of Matt's most beloved garments (quite evidenced by the fact you could see through it in several places) and so I'd held on to it knowing that someday I could make him something with it.  The day had finally come.
Right sides together I sewed the swatch of corduroy into a tube around the batting.  I flipped it inside out and closed the ends with a little top stitching. I'd been trying to puzzle out a way to not have any top stitching, but my poor brain couldn't make sense of it.  Matt repeatedly assured me that top stitching was just fine so I finally consented.  It really does look fine, too.  He is always supportive like that.  I guess he figures it sure beat the heck out of having no padding on his strap and besides, its mostly covered up by his long hair.

I absolutely adore projects like this.  I could have easily gone out and bought a new strap for the binoculars, but instead I made one myself with supplies I already owned, making it with sweetly sentimental fabric to boot.  That is SO much better in my mind.  It is so satisfying. It is so cheap (allowing me to spend my money on much more fun things!).  It is so eco-thrifty.   And it made Matt's neck so much happier, too.

Will it win a blue ribbon at the fair?  Absolutely not.  Could it have been done better?  I am sure it could have been if, say,  it was done by either of our mothers' more skilled hands.  Does it get the job done without looking like a total pile of rags on a string?  Without a doubt it does.  I count that as a sewing success.
By BLD in MT