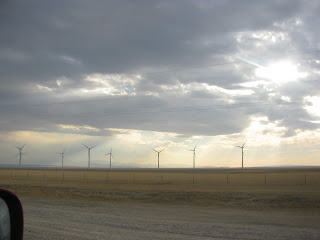 On one of our tie-dye vending trips over the summer we made a special point of planning our route home to pass through a large wind farm in the area.  I've seen many windmills, but only once (along the Columbia) have I seen a large number of them all in one place.  They are sort of eerie in a way.   The way they spin and tower over you.  The way they stand in row after row against the horizon.  The place had a rather surreal feeling to it.  But, cool, too.  A charged sort of atmosphere which seems quite appropriate.  I sure admired them spinning away--making lights turn on, ovens heat up, washing machines churn--from wind, from air. 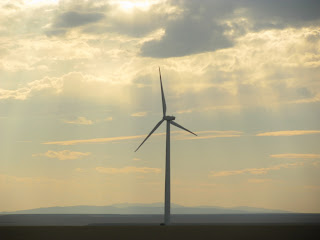 I know wind turbines have problems of their own--like birds hitting the blades and the changes of pressure caused by the spinning action which can harm bats--but coal and oil harms birds and bats, too and  I would venture to say that their impacts are much farther reaching and harder to mitigate.  In places like this--where the winds blow almost constantly across the plains--I think it is a superb that we're trying to harness that force to provide the electricity we so desire. 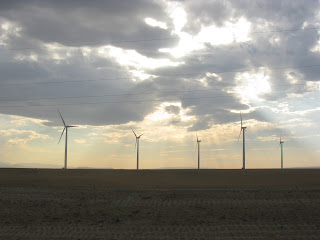 Solar power, wind power, and reducing our demand for electricity (that last one it a big one!).  I hope to keep seeing more and more of these things in Montana and around the world. 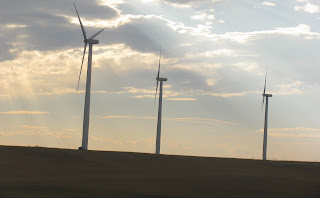