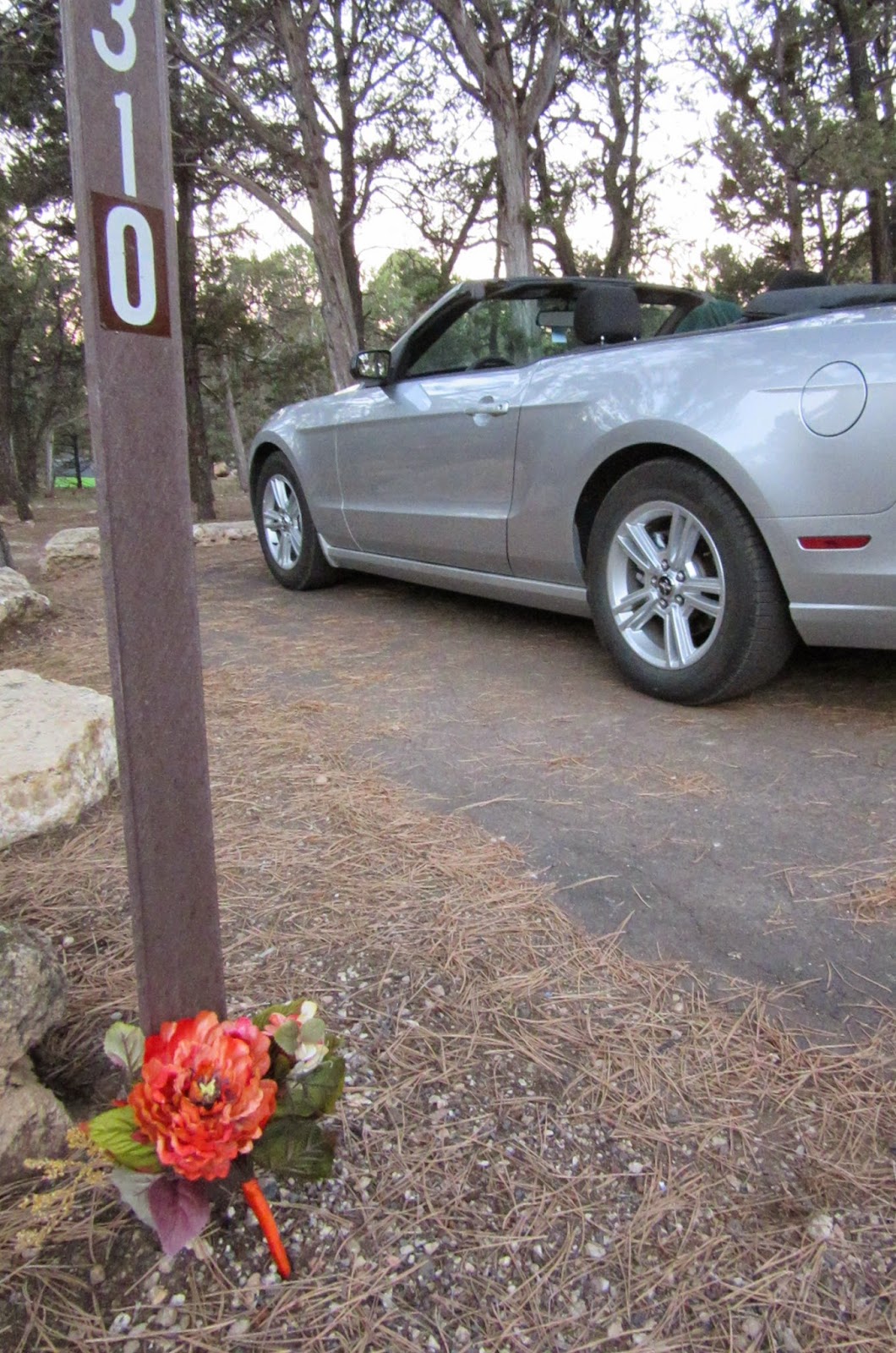 For our first full day in Grand Canyon National Park we decided to check out a portion of the iconic Bright Angel Trail.  So, after a quick breakfast of bagels and canned pears we left the convertible behind at camp and set off for the shuttle stop at the entrance to our campground.  Grand Canyon, like Zion, operates a very convenient shuttle system to mitigate traffic and permit expanded hiking opportunities. 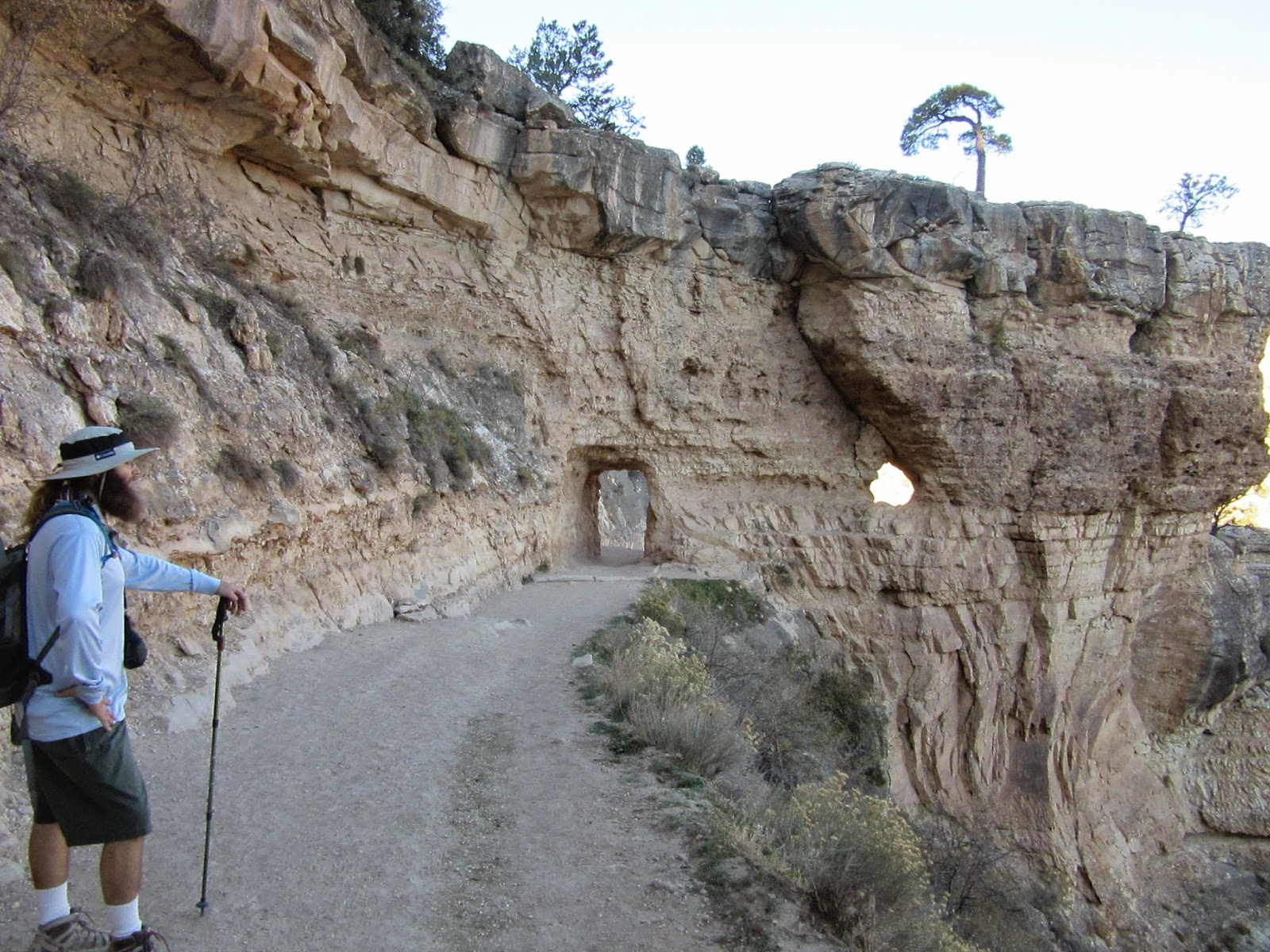 When we were first planning this trip, we had wanted to hike to the Colorado River at the bottom of the canyon and camp.  We soon realized though that a trip to the bottom and subsequent slower trip back up to the rim would use all of our allotted time in the park.  So, in the interest of seeing more of it we decided to dayhike down a ways, but not to the bottom.  We were not really sure how long we'd hike down into the canyon.  In reading up about canyon hiking there is a strong emphasis on not over-doing it on dayhikes.  Later, I could really see why.  Going down was easy-peasy.  I totally could have hiked to the bottom with no problem.  Its the going back up that gets harsh quick if one tries to do it all in one day.  That is not to say it would be impossible, but it is not recommended.  We elected to hike to the 1 1/2 mile rest house and see how we felt and go from there. 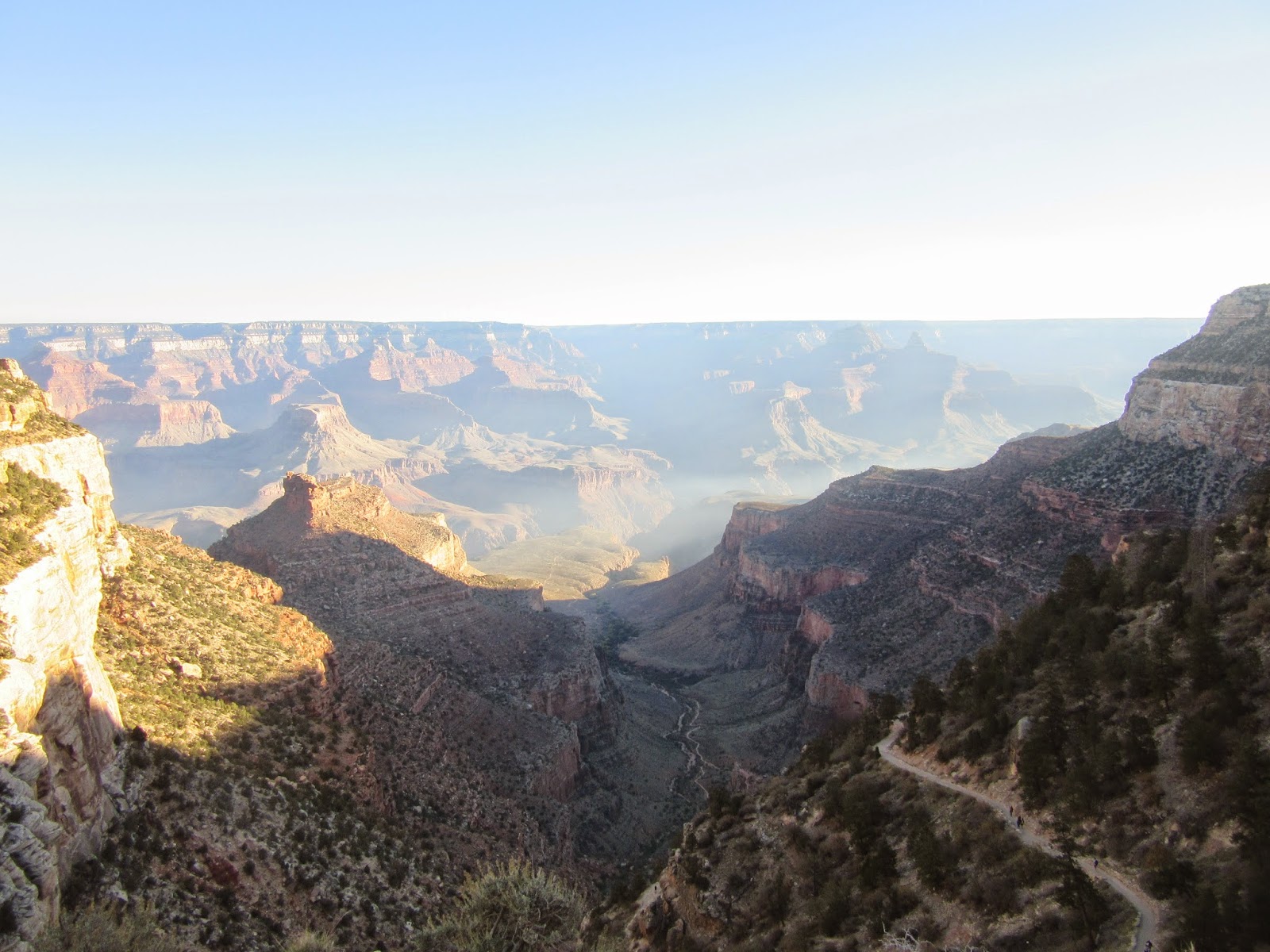 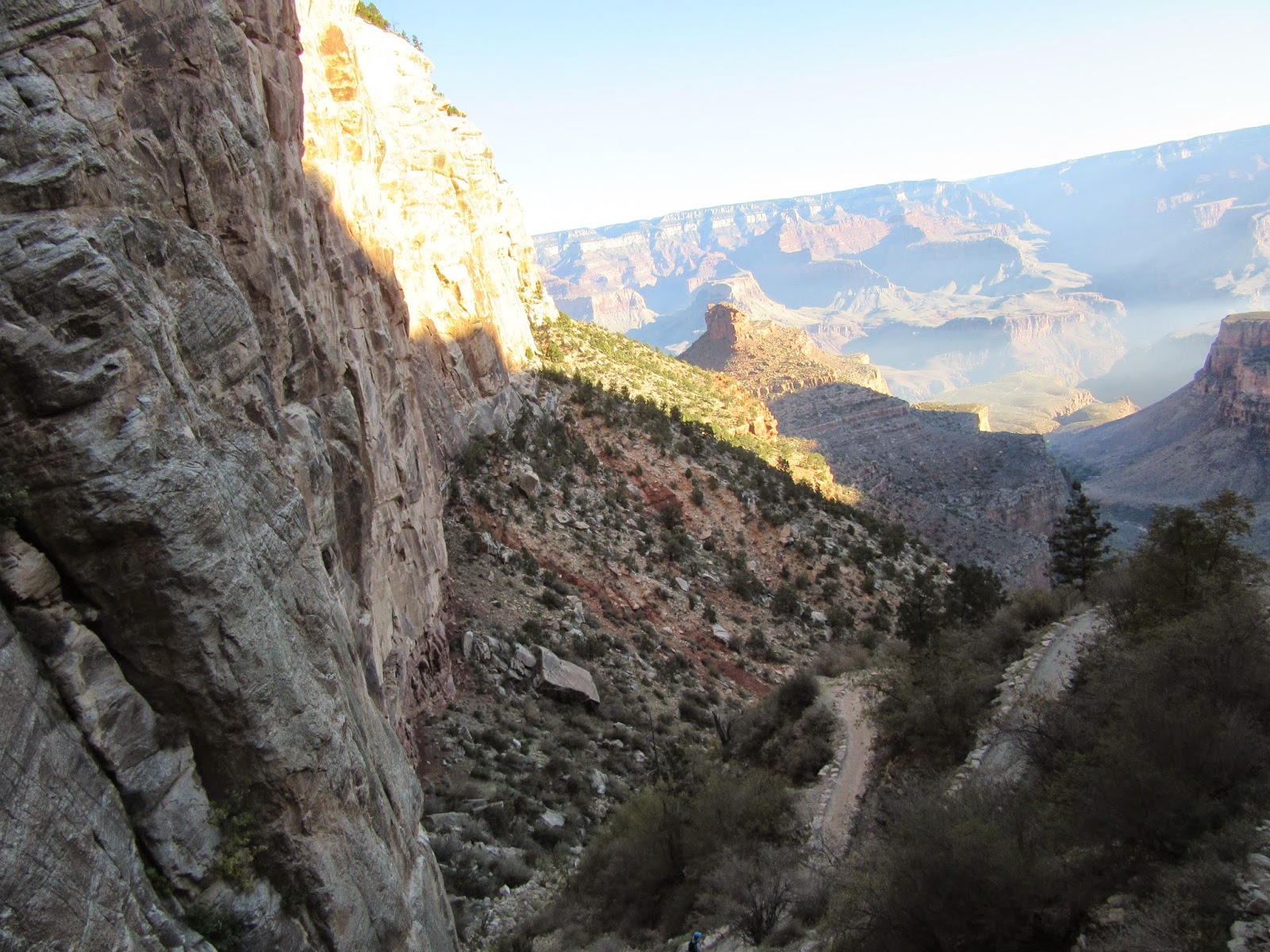 We saw a new-to-us species of bird pretty much right off.  The little auburncolored Canyon Wren was hopping about and clinging to the near vertical walls.  It was a cute little thing.  Not to mention astonishingly agile.  We also saw a Red-naped Sapsucker, some Dark-eyed Juncos, and a Spotted Towhee.  We hadn't seen the latter in quite some time it feels.  Then there was our most special bird sighting of the day--a Peregrine Falcon tearing around after an American Crow.  The aerial moves were enough to be exciting in their own right, but we'd also never seen one of these beautifully deadly raptors before.  We could see the striking facial marking, like dark tear tracks, from the trail through our binoculars.  It was spectacular.  The banking, the speed.  What amazing creatures!
And then when they flew out of sight we still had the rest of the spectacular setting to dazzle us. 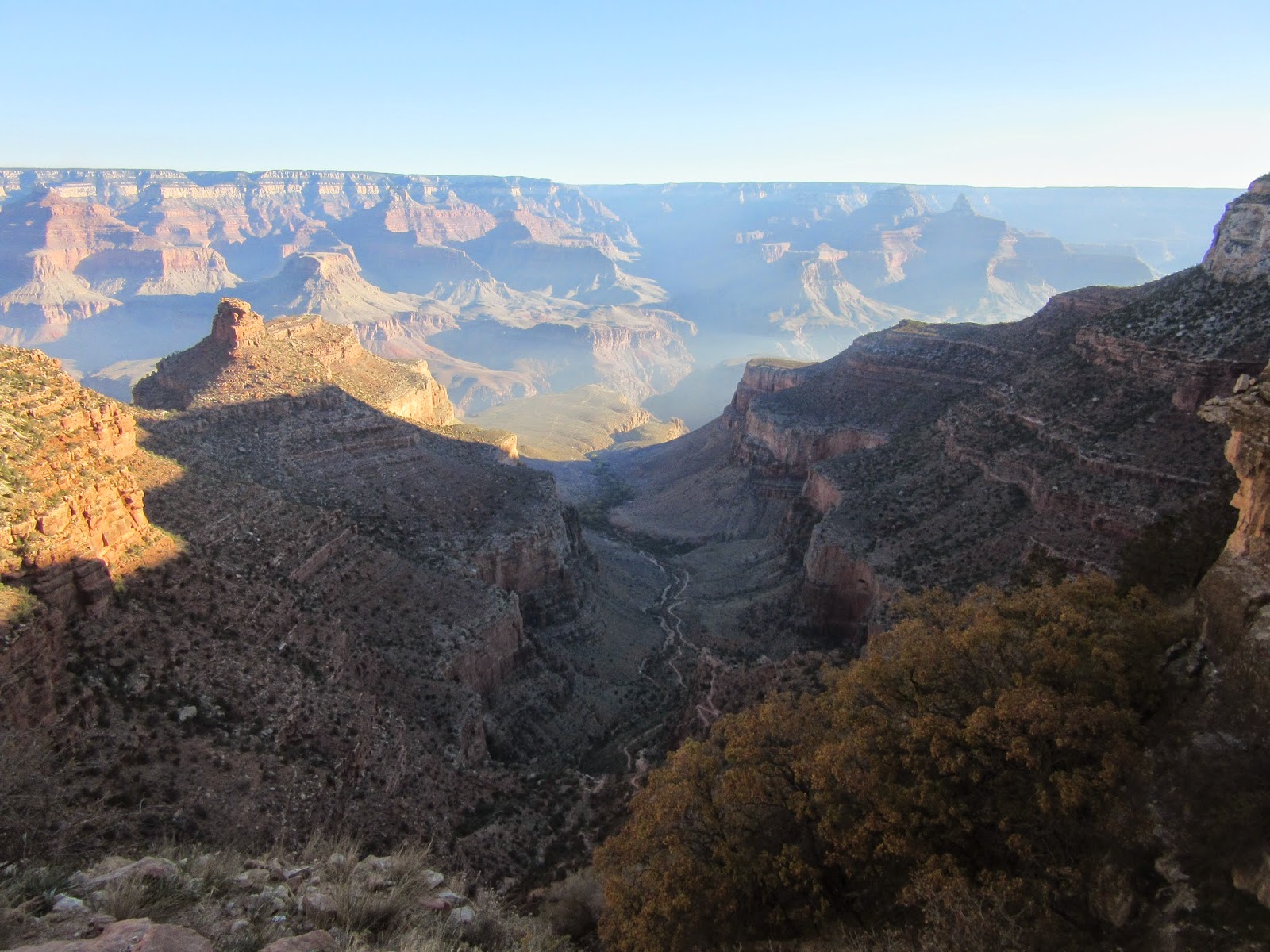 We were very glad to have set out for the hike so early in the morning.  Most of our journey--up and down--was delightfully in the shade.  Even in late October it got hot down there in the midday sun. 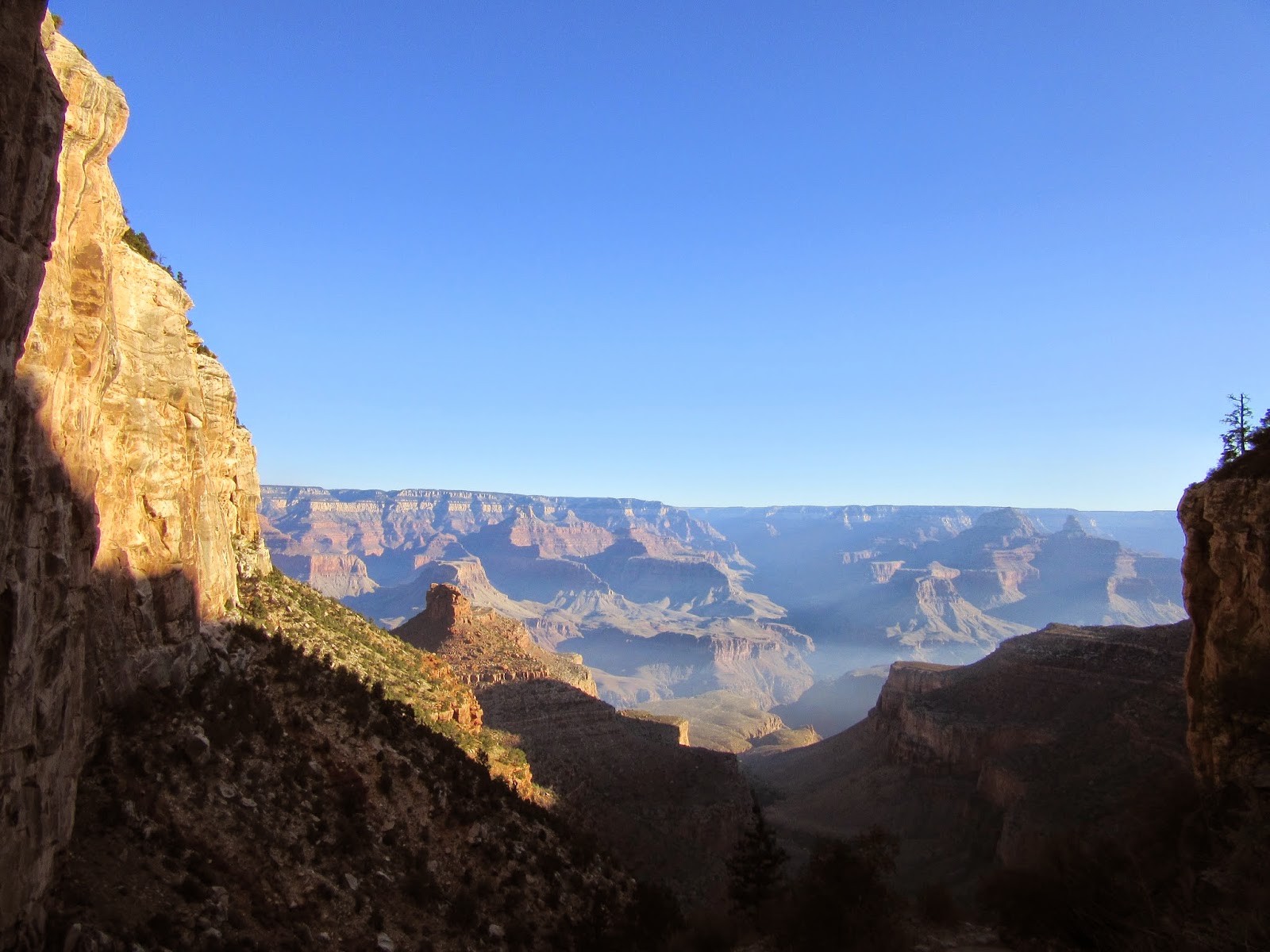 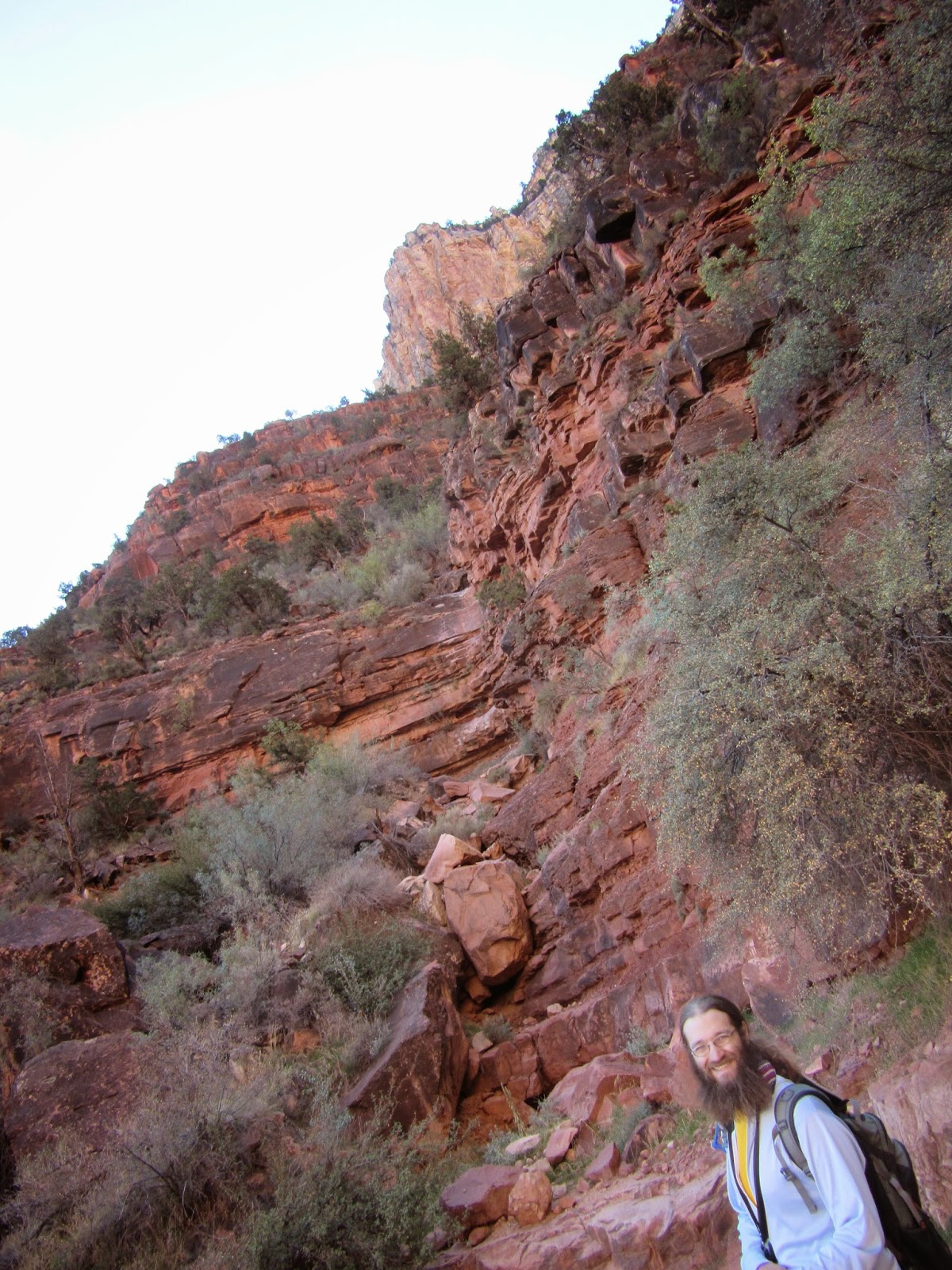 We made it to the 1 1/2 Mile Rest House and had a tiny break, though we hardly needed it.  As I already said, it was ridiculously easy hiking.  It was 100% downhill!  As a person of the mountain west this was an oddity to me.  As in Bryce Canyon all the hiking started at the top and went down.  In Montana we start at the bottom and hike up.  I know that in the end I have to go up and down in either scenario, so it should be the same, but its not.  It was a significantly different hiking experience.
While we certainly had company on the trail there were not as many people as we might have expected.  Bright Angel is a pretty popular trail after all.  It was interesting to observe the wide variety of people on the trail--young and old, thin and fat, walkers and trail runners (yes, there are crazy people who run up and down the Grand Canyon), dayhikers and overnighters, speaking all sorts of languages.  It was pretty fantastic to note.   There was one group of very fit Americans who were going up as we were going down.  They were noteworthy in that they were making it look absurdly easy--to go up.  Almost everyone else on the ascent looked like they were having to really work for it.  This group though!  They were laughing, smiling, and making incredible time.  They would later descend again--running this time--while we were still making our way to the 3 Mile Rest House.  Crazy.  Good for them though. 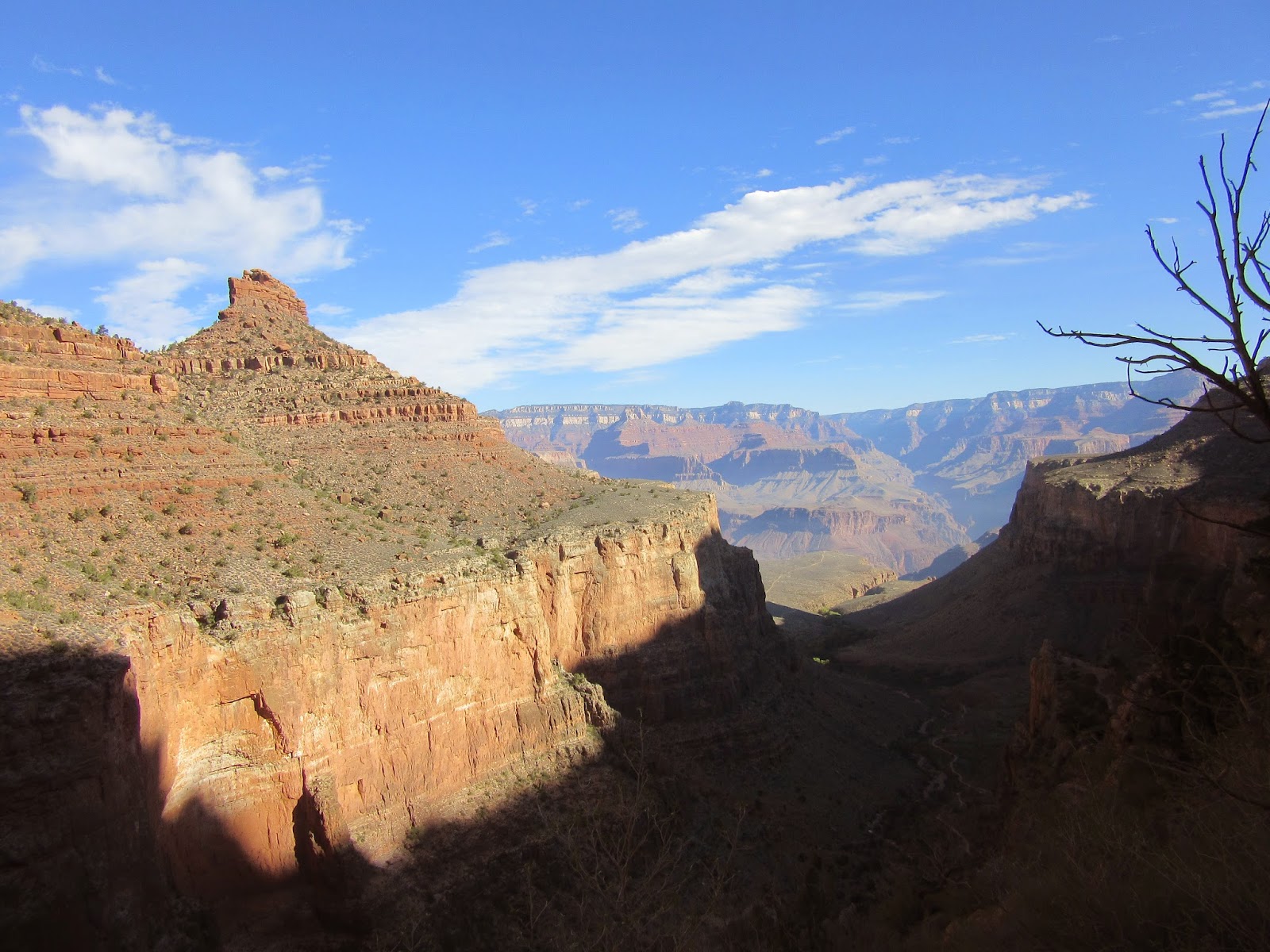 We lingered a while at the 3 Mile Rest House, hiking out to a point where we sat and soaked in the view. 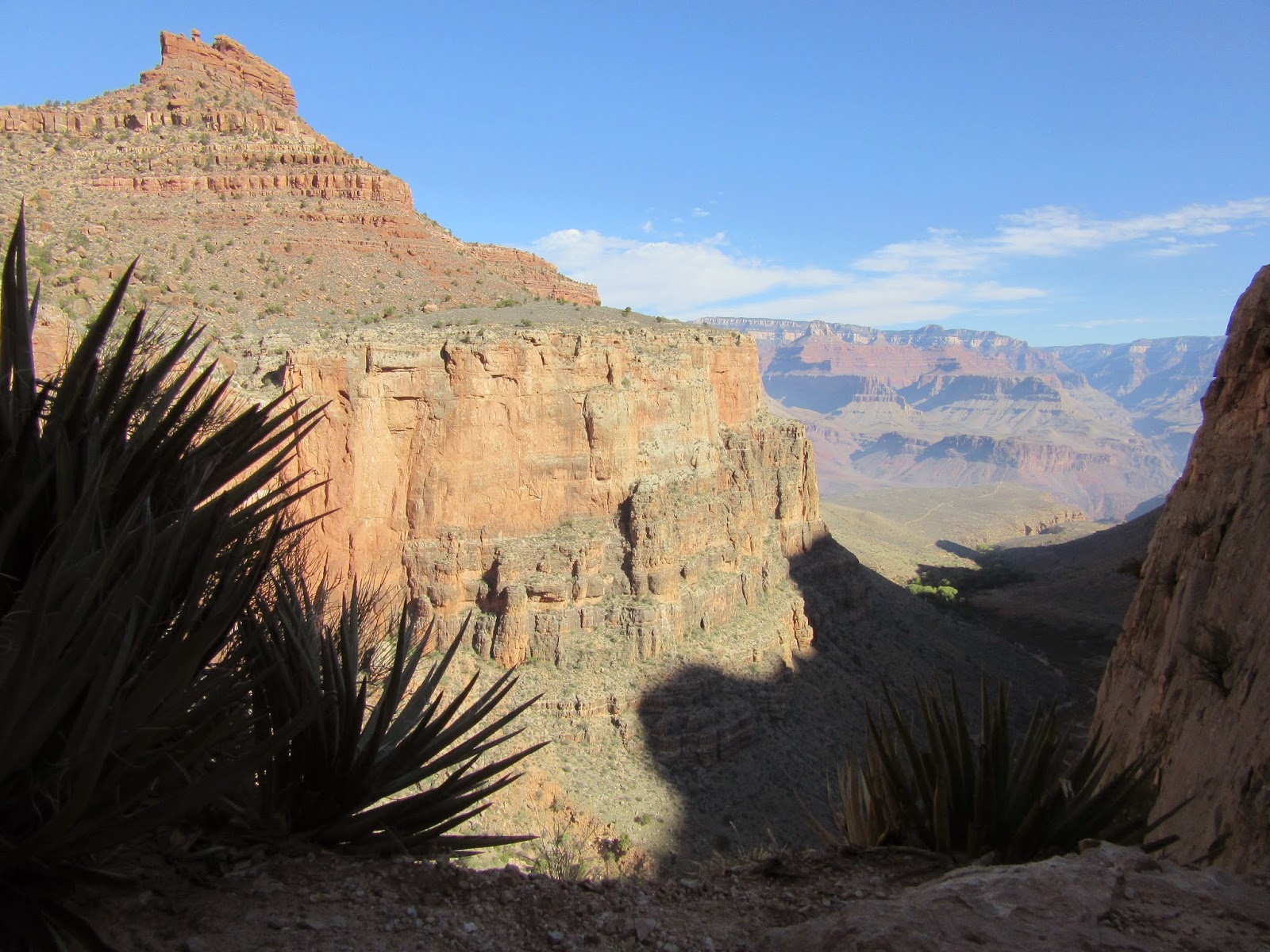 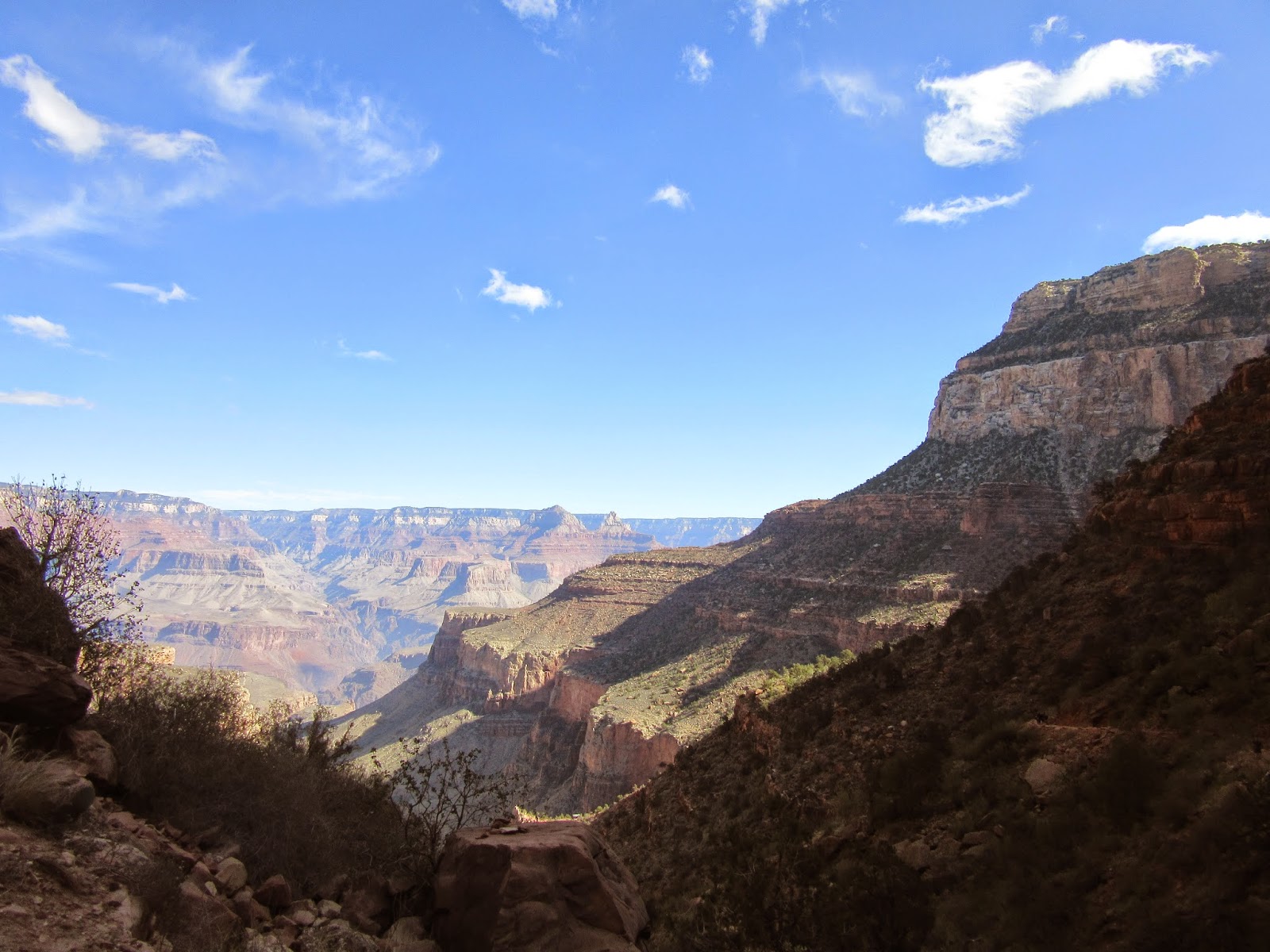 We still felt fresh and could have continued further down, but were wise enough to remember we had 2,110 vertical feet to gain before we looked out from atop the rim again.  Thank heavens we kept that in mind!  Despite only being three miles of trail to tread that was a crazy, wicked ascent.  We were so grateful for the shade.  The portions of trail now in full sun were significantly harder than those in the natural air conditioning. 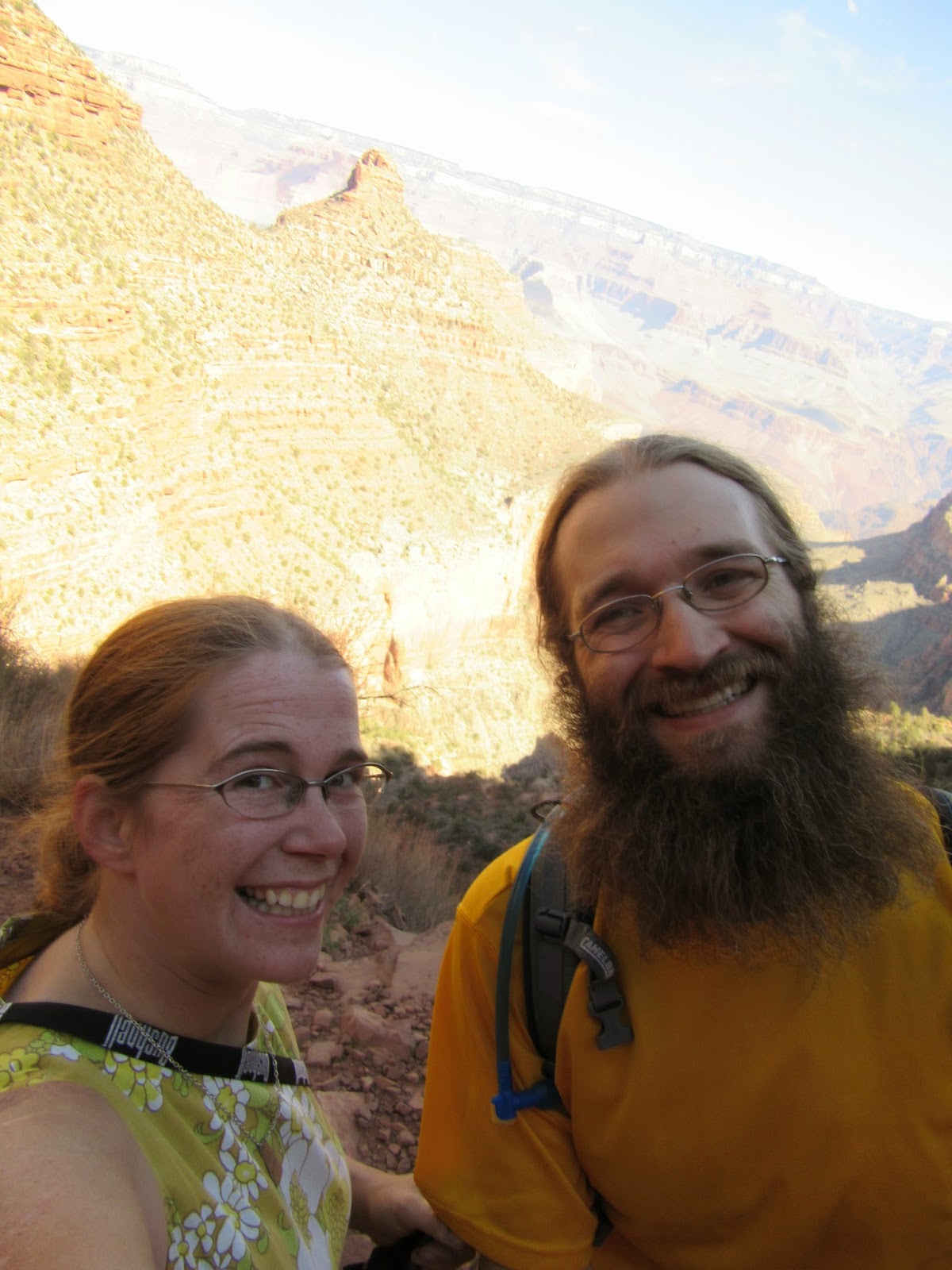 From the 3 Mile Rest House to the 1 1/2 Mile Rest House--the first half of the ascent--it wasn't too bad.  It was up, but with enough of a gradual climb that it wasn't killer.  That last mile and half out was pretty brutal though.  For comparison's sake, from the 3 Mile to the 1 1/2 Mile Rest House the elevation gain is 980 feet.  In the last mile and half the elevation gain is 1,130 feet.  Those couple hundred feet different between the two segments made a noticeable difference, in my opinion. 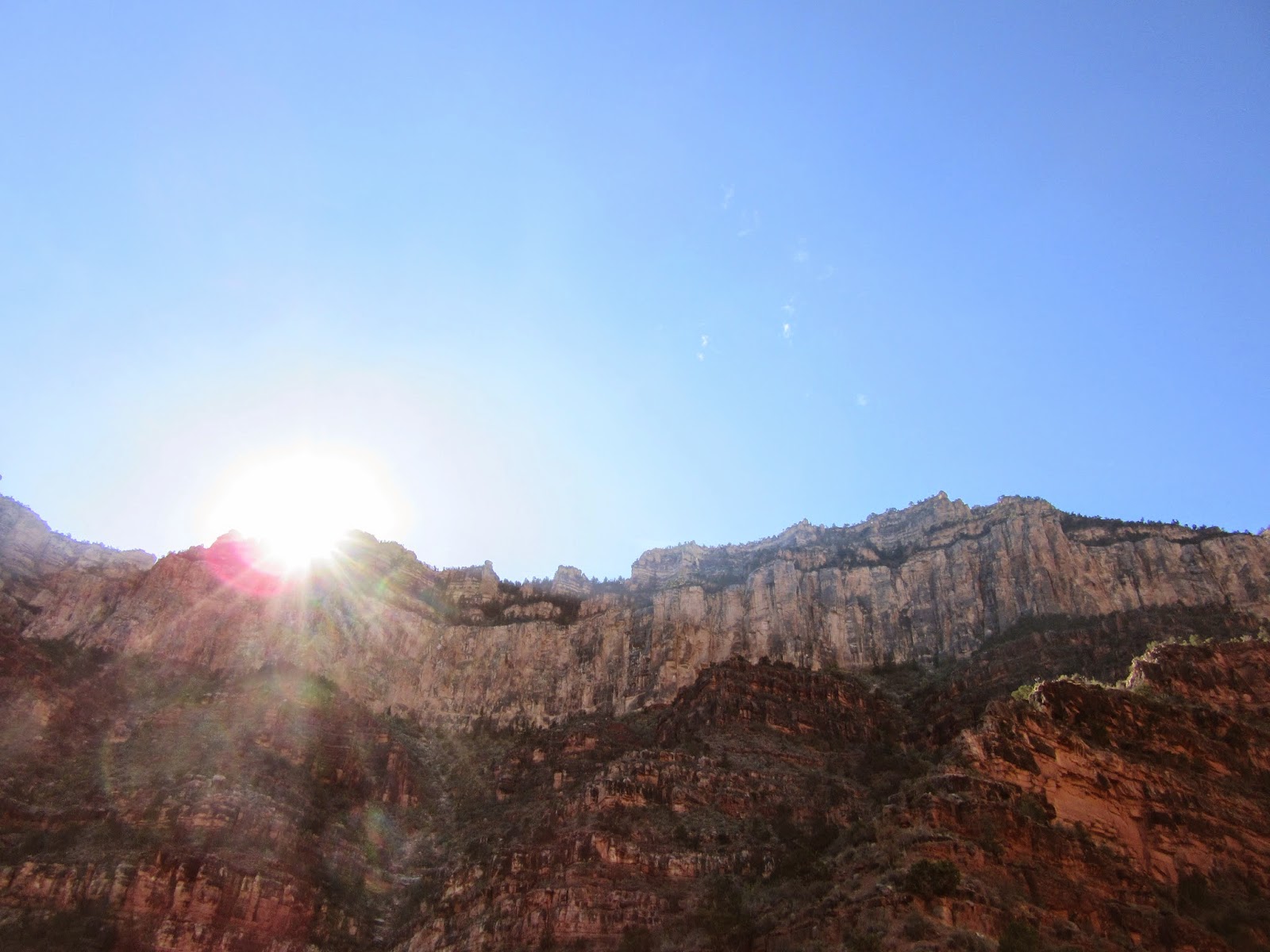 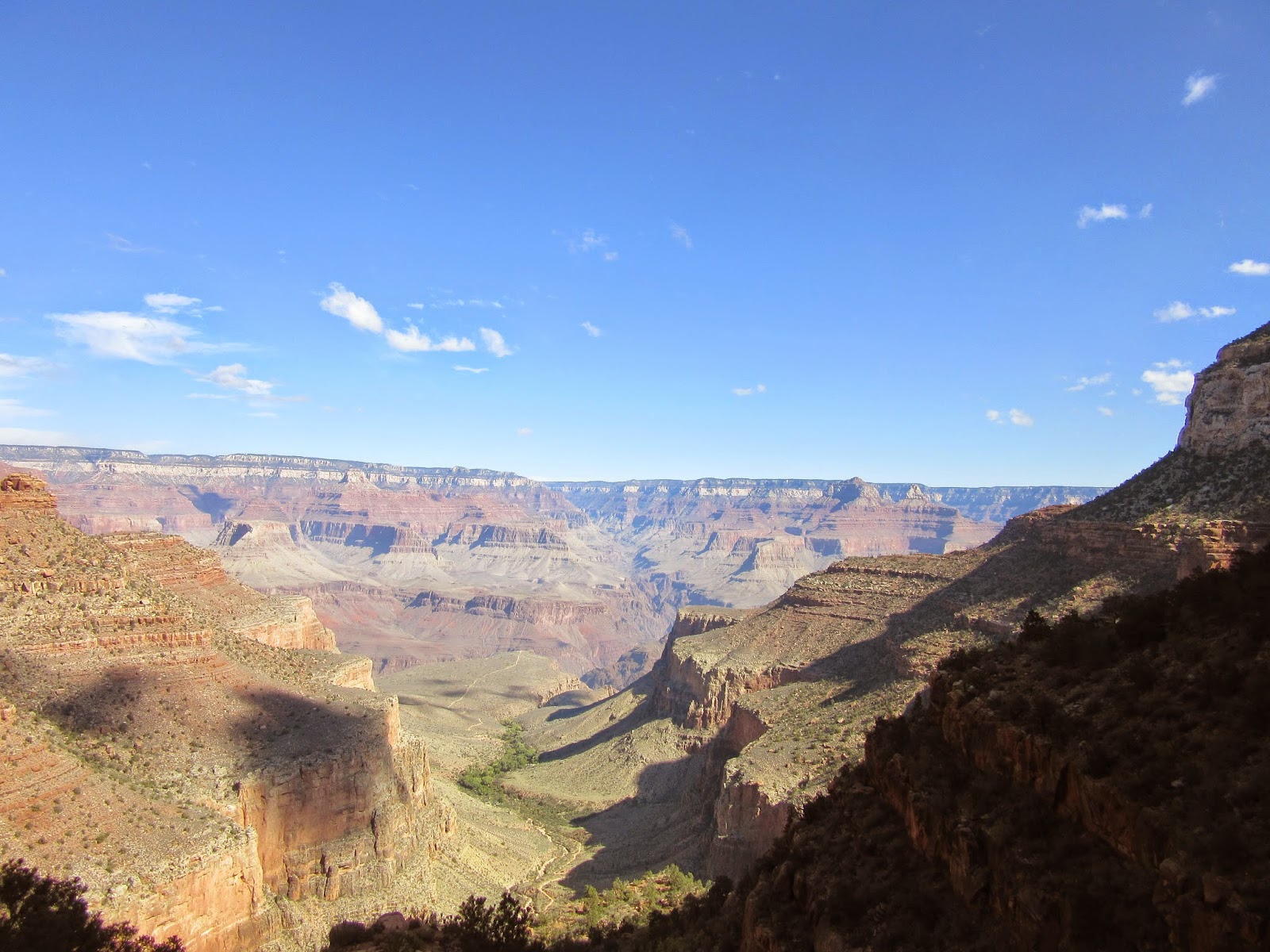 And then we were back at the rim again.  Tired and happy and with a full half day left to explore. 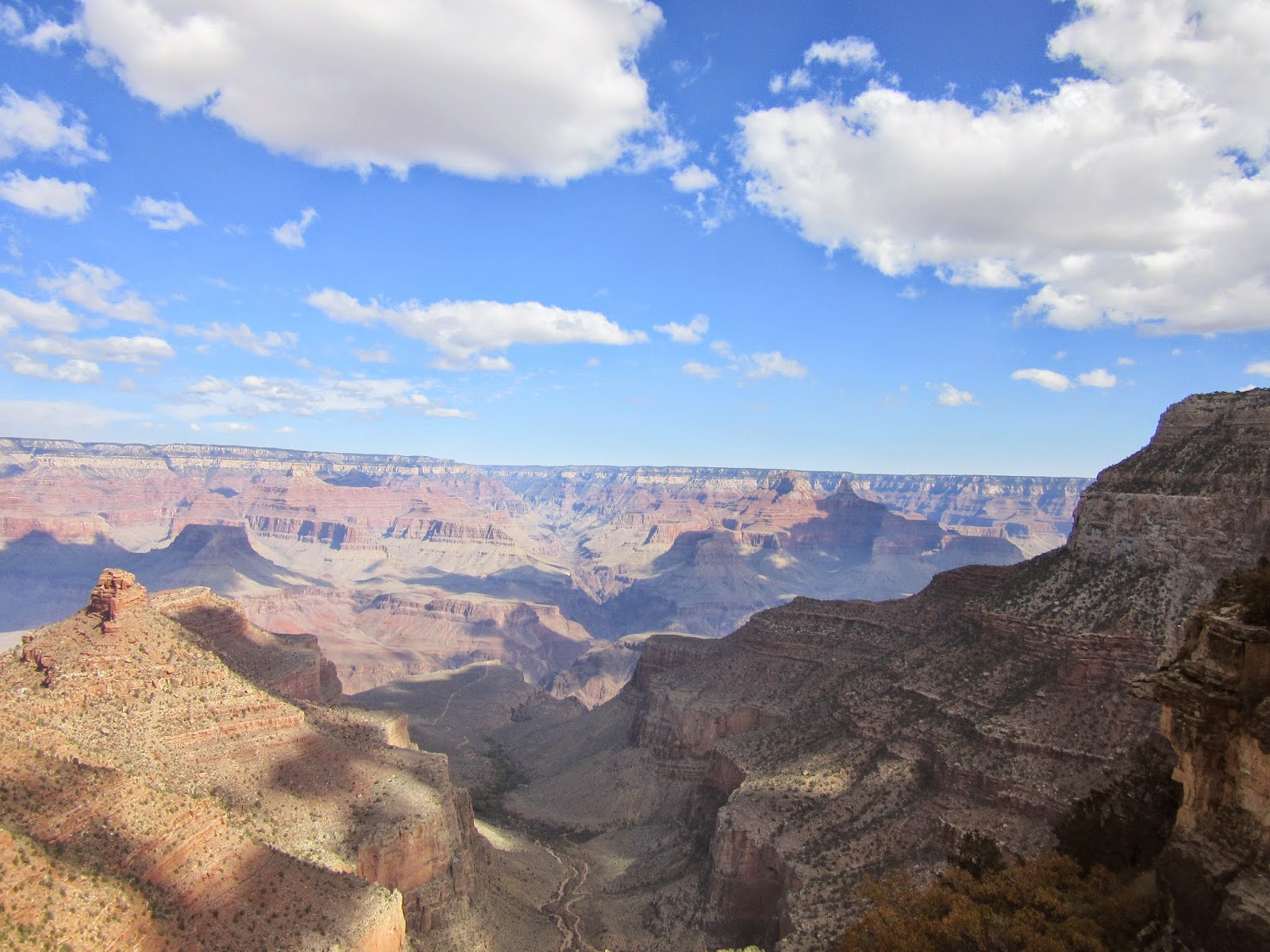 We returned to camp--which was almost completely deserted at midday, it turns out--and had a good lunch.  It was weird to have the campground so empty.  It was like we had the place all to ourselves.  Well, us and the rock squirrels. 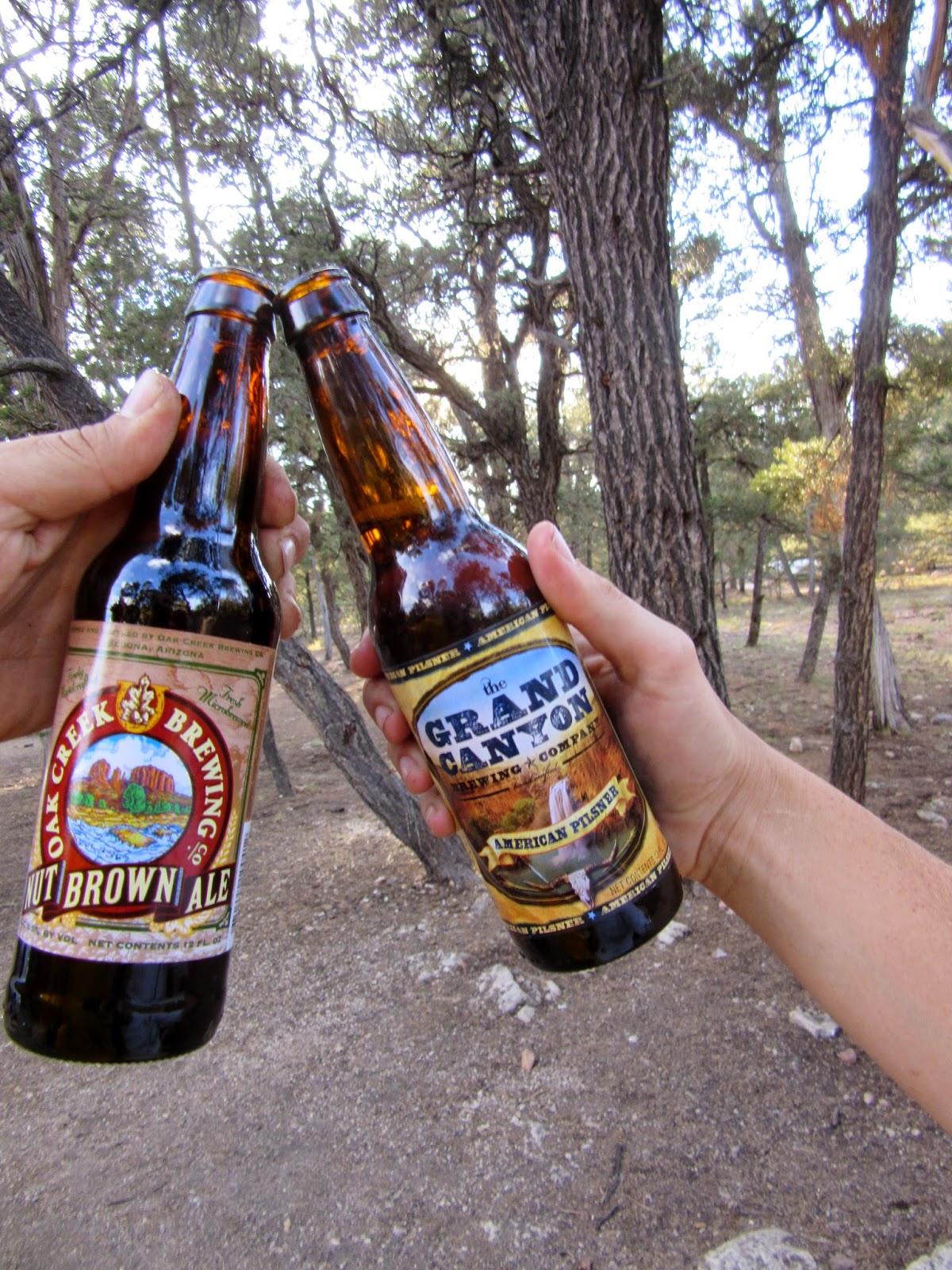 For the afternoon we'd decided to rent bicycles and ride along the Rim Trail.  The woman there (who taught us about the previously mentioned tarantula migration season) hooked us up with a free half hour of rental time on account of it being our honeymoon.  How nice! 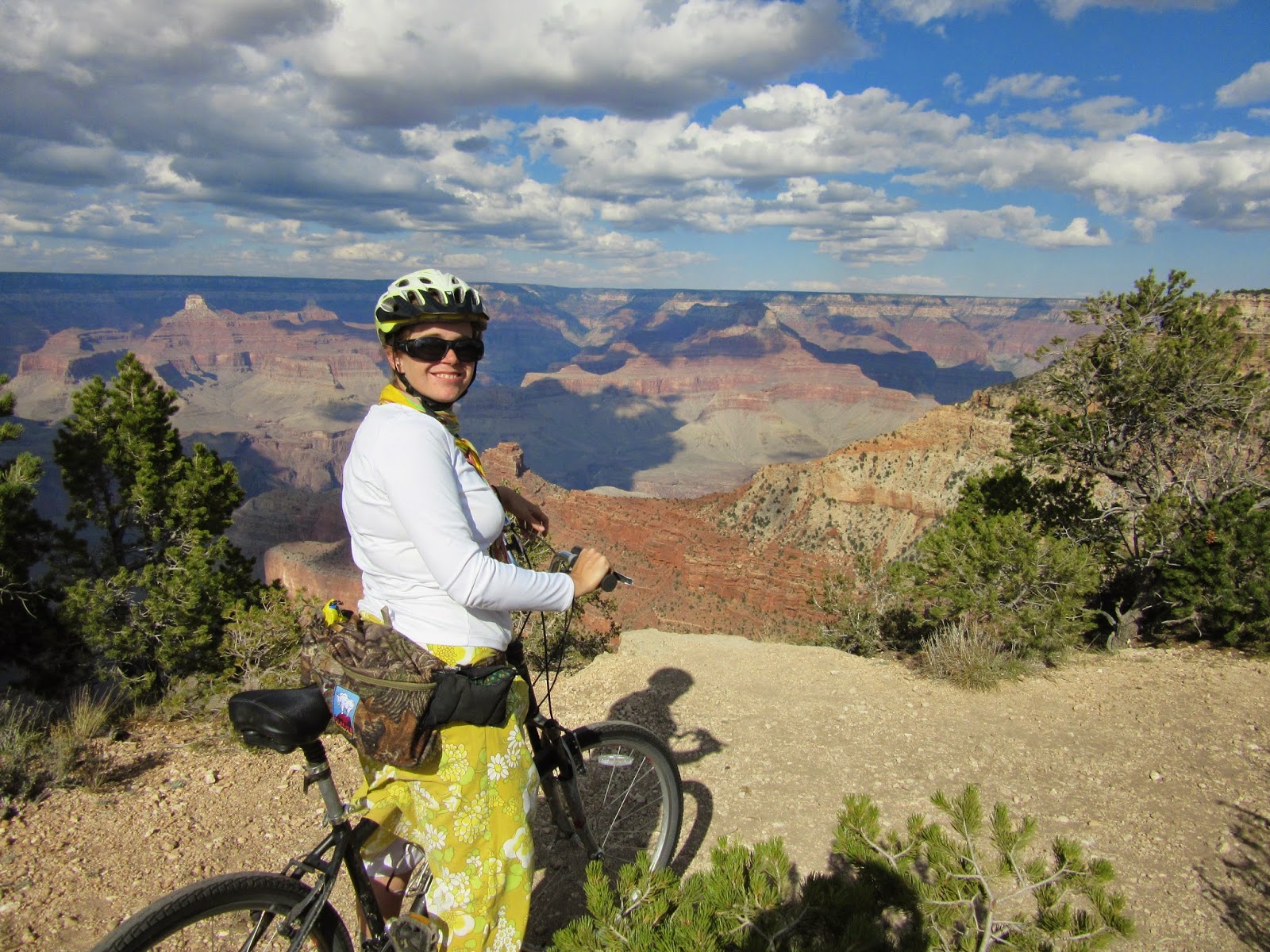 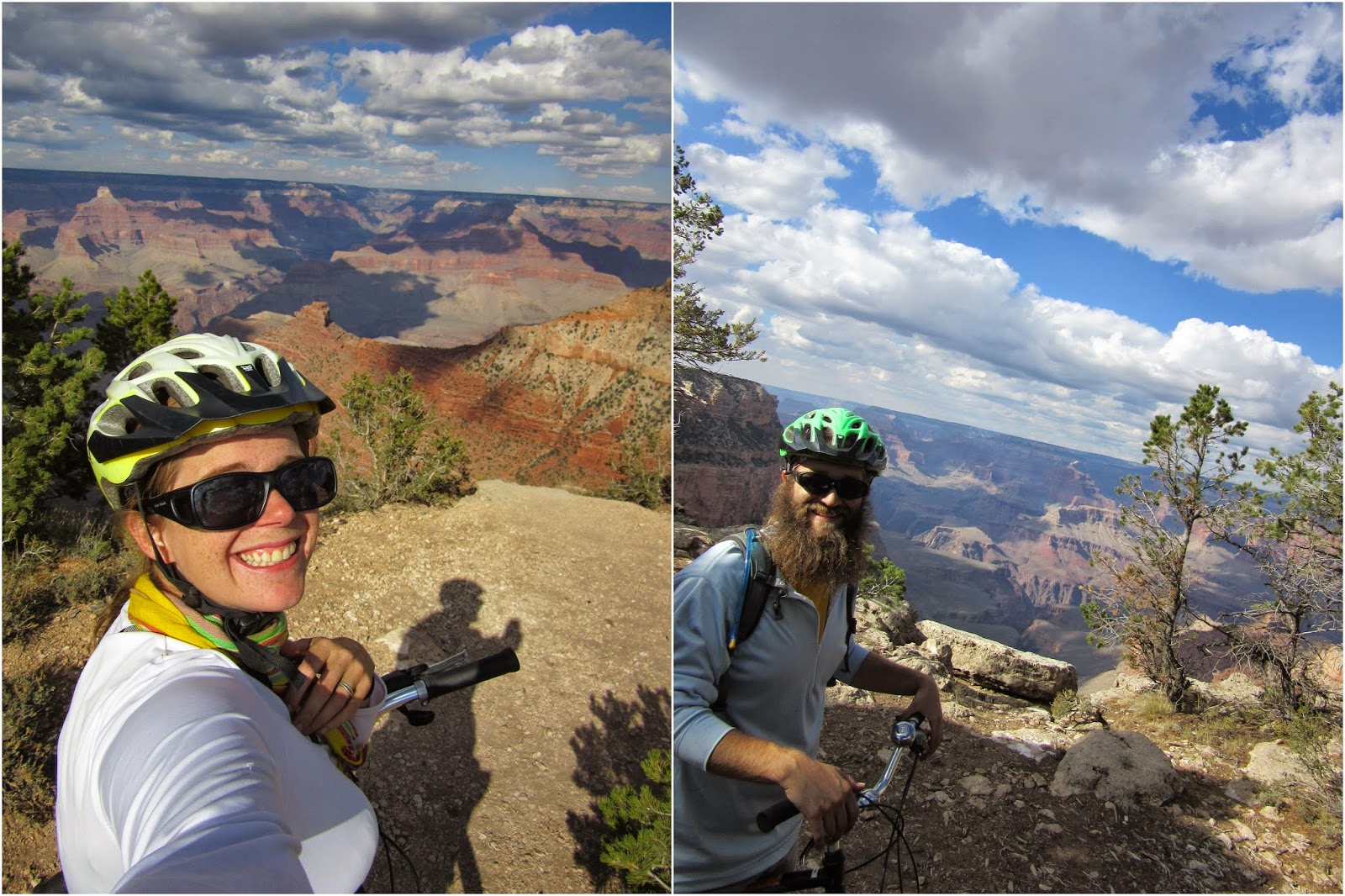 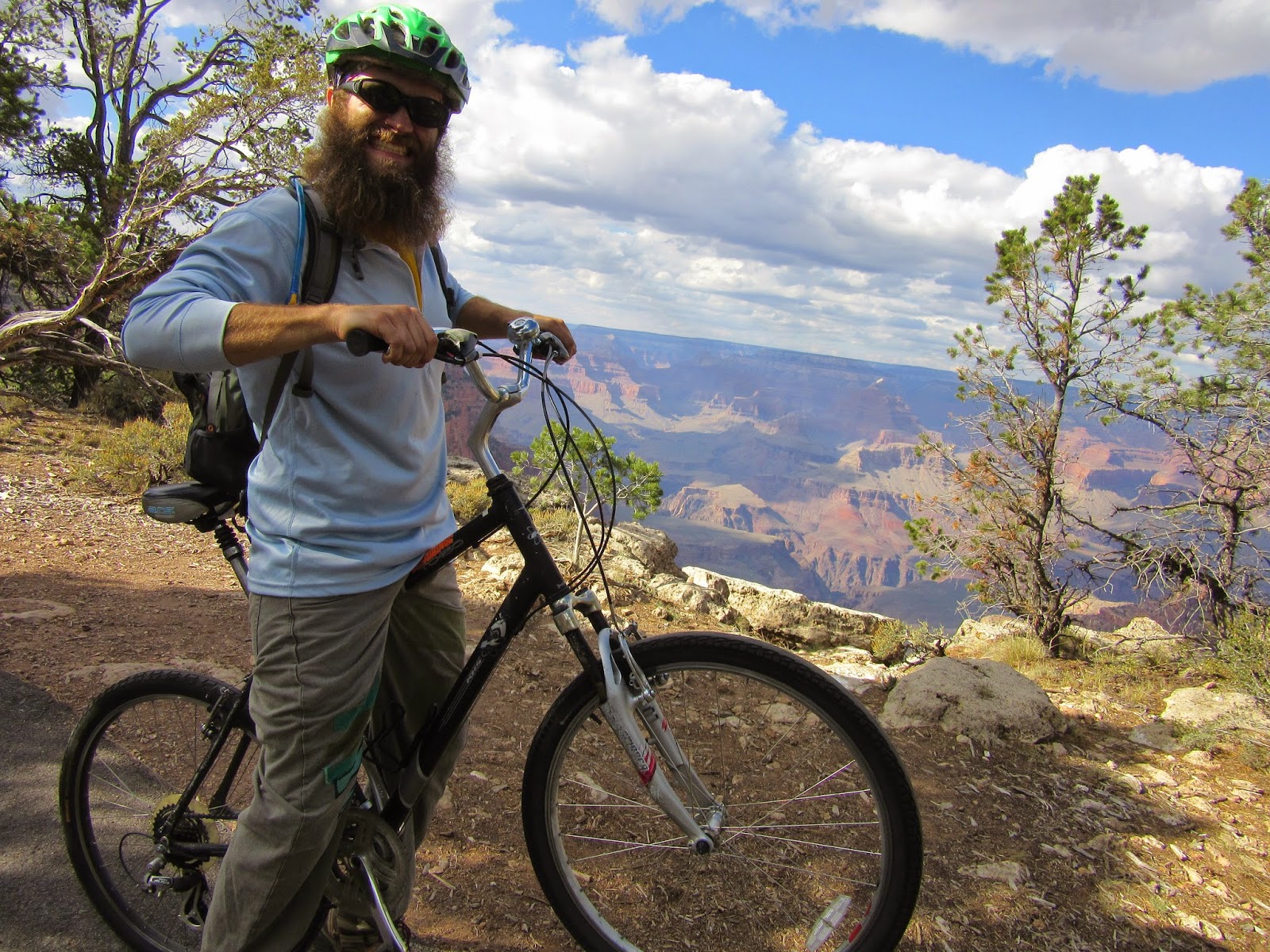 It was weird to ride someone else's bicycle.  I hadn't realized how comfortable I was with my own mount until I was asked to use another.  Still, we both got used to the unfamiliar bicycles quickly enough. 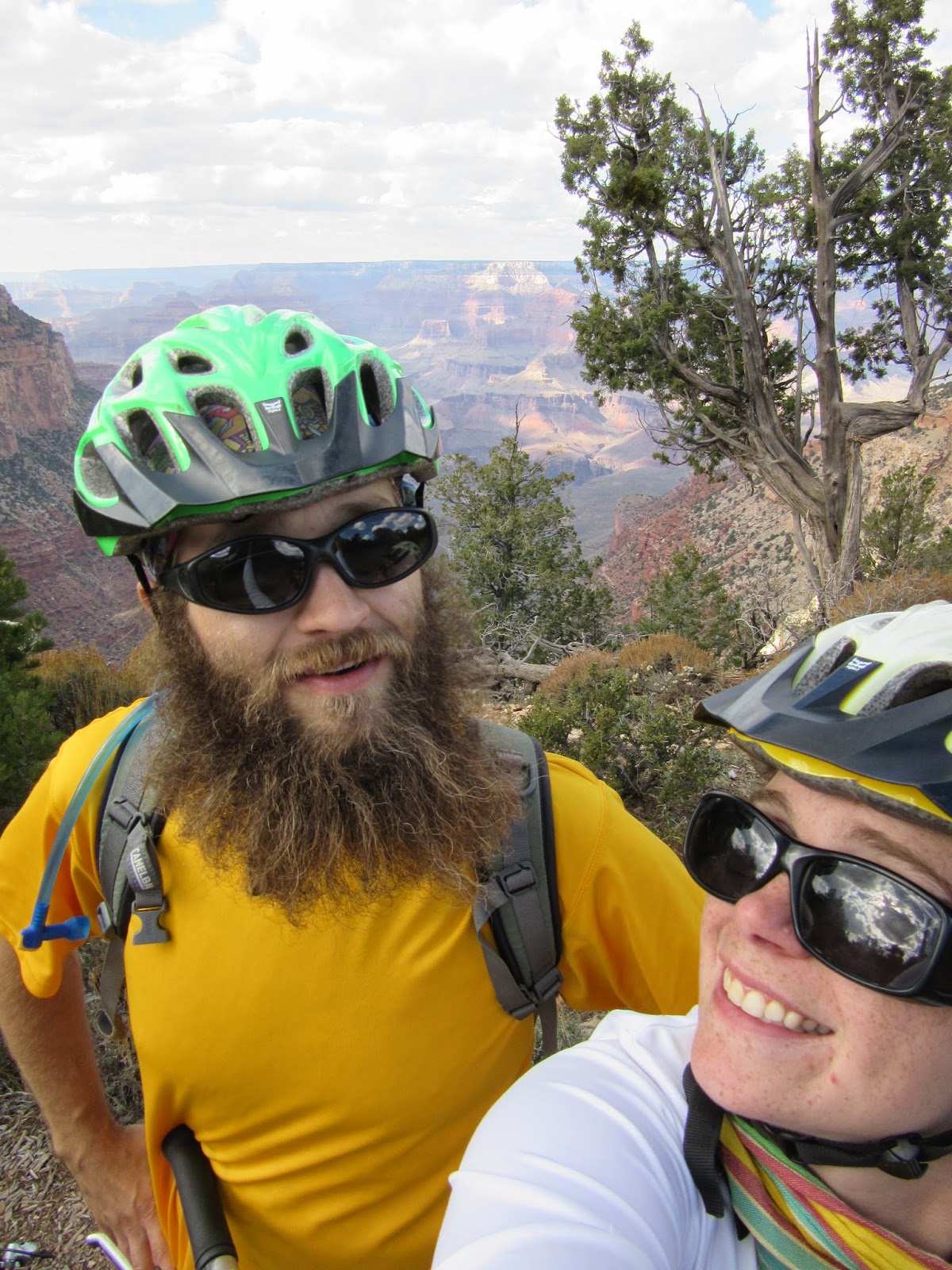 We cruised out toward the South Kaibab trailhead.  The wide, paved trail wove through the trees and along the rim in a lovely mixture of shaded woodlands and expansive, sweeping canyon views.  We had to stop a lot along the way.  A lot, a lot. 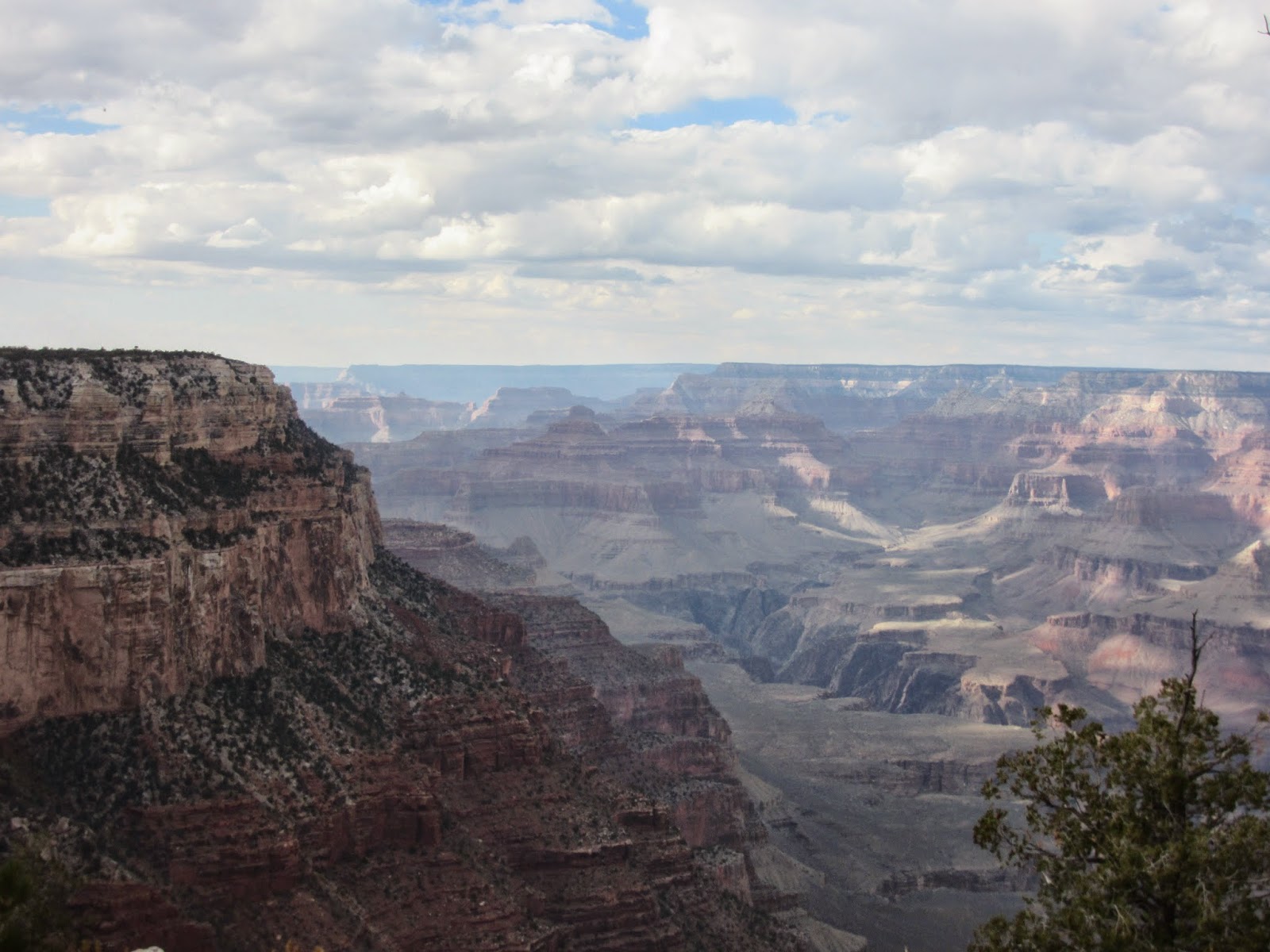 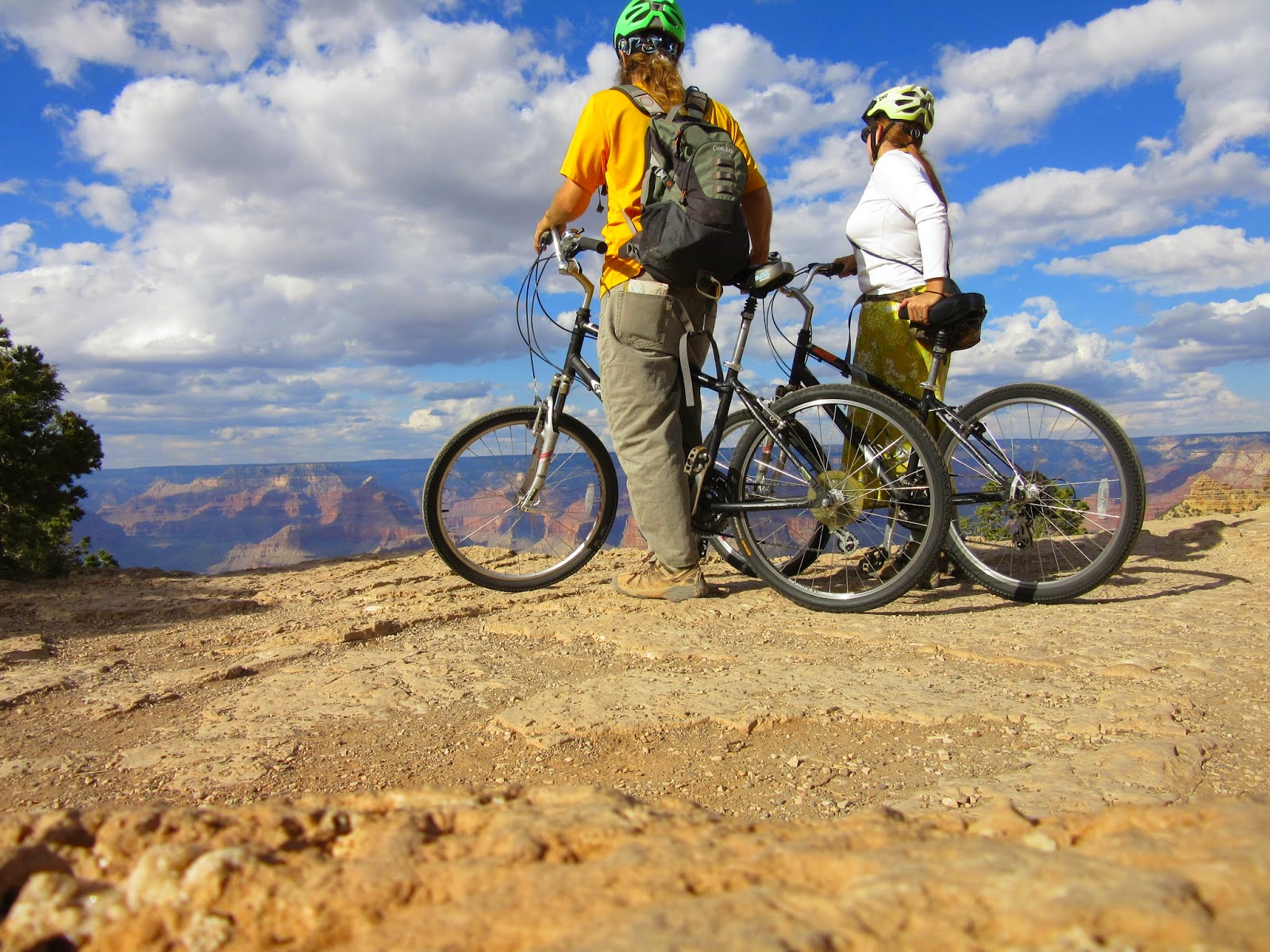 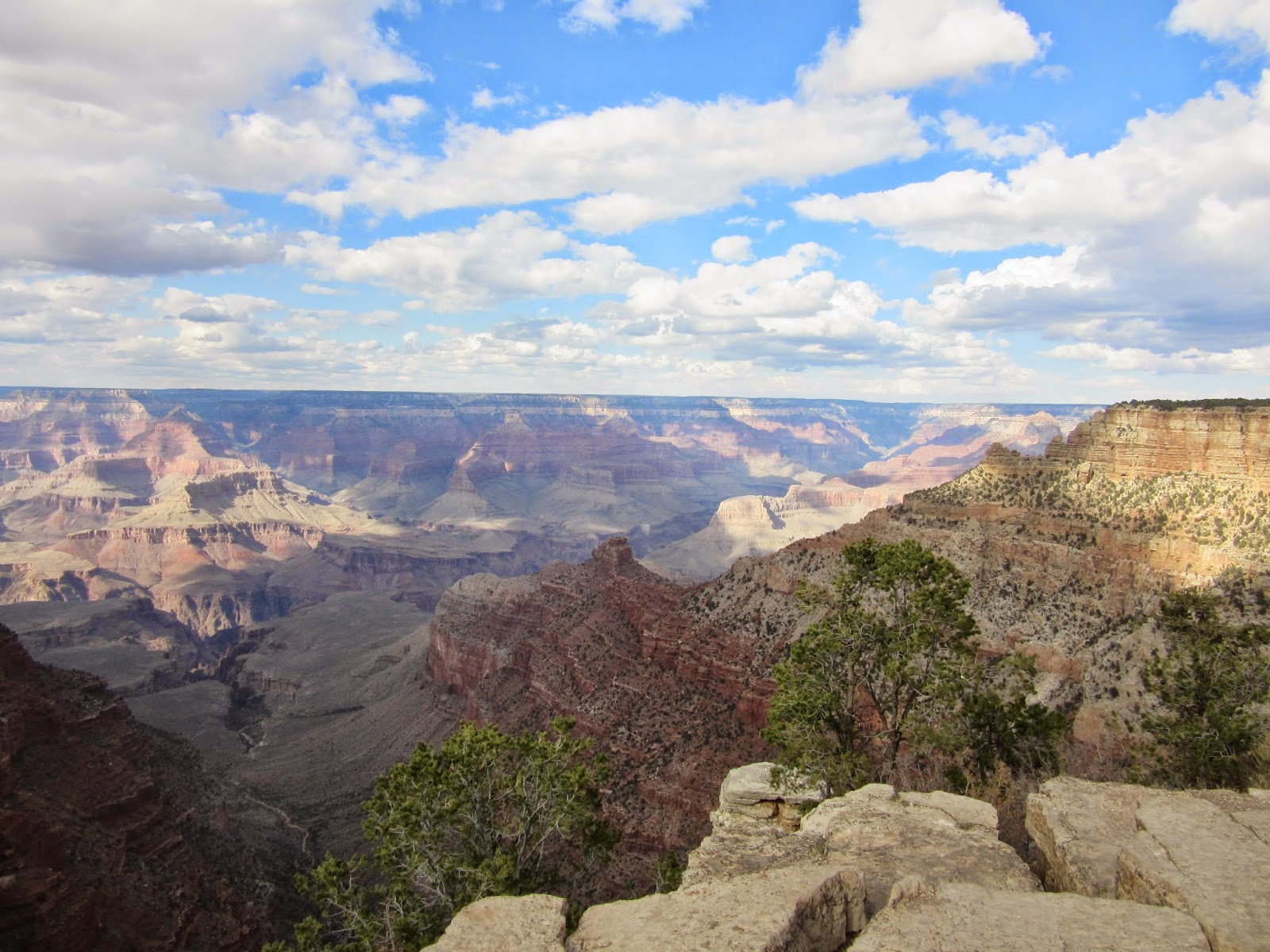 We cycled for a round-trip of about five miles.  We both enjoyed it immensely.  We made mental notes to look into bicycle rental options on our future trips about this great country.  It is a wonderful pace to explore at and was perfect for a quick afternoon excursion. 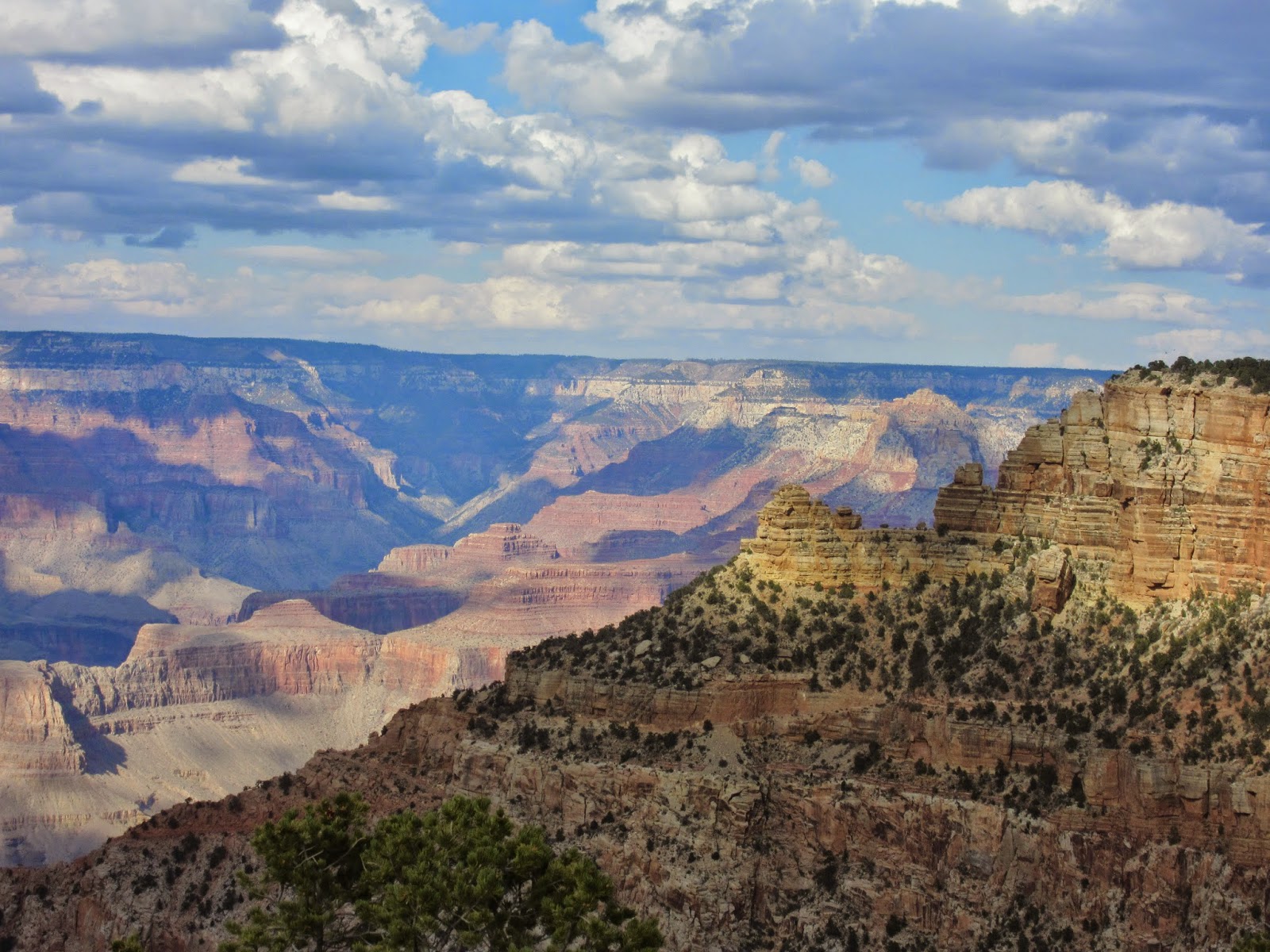 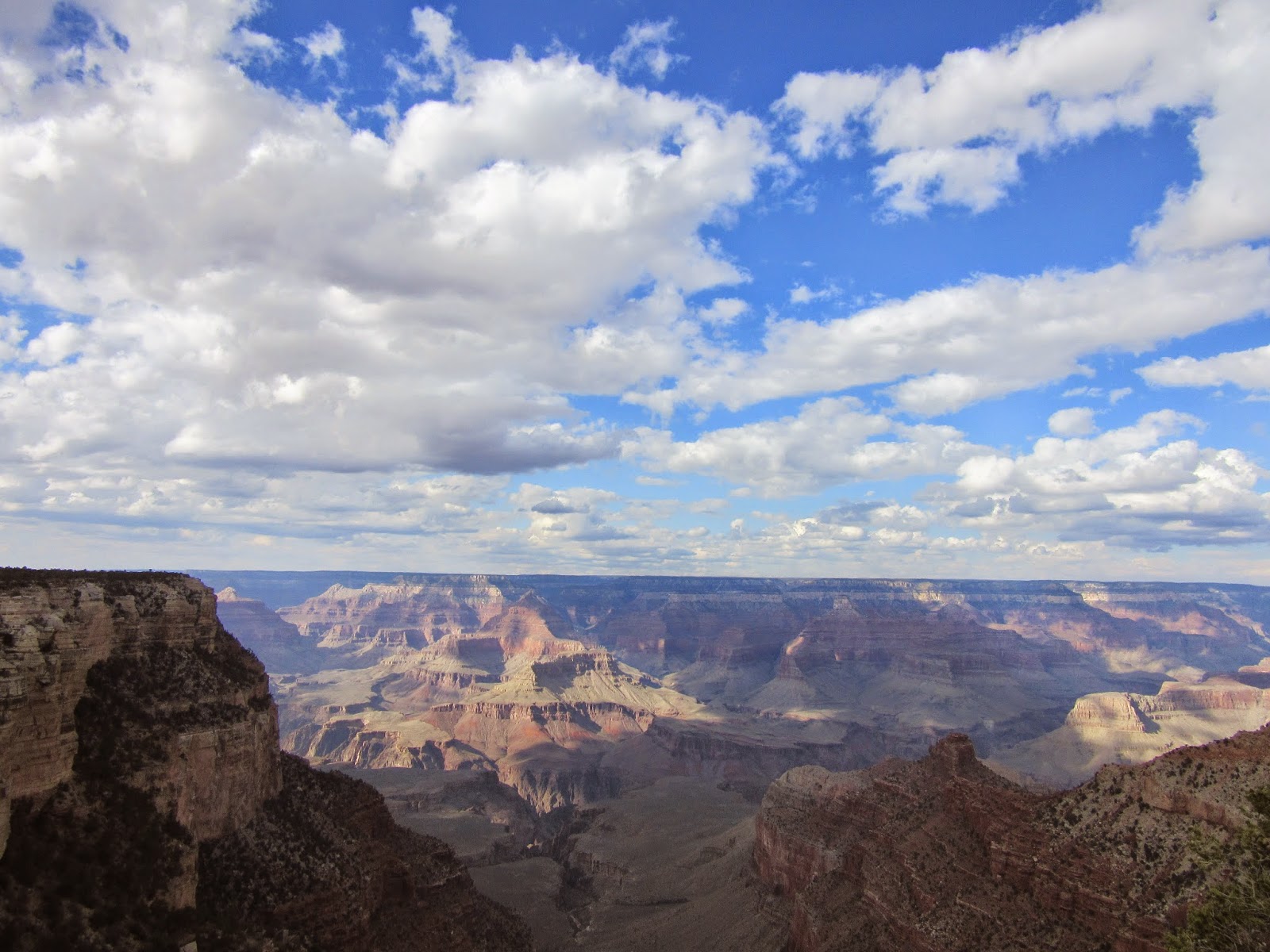 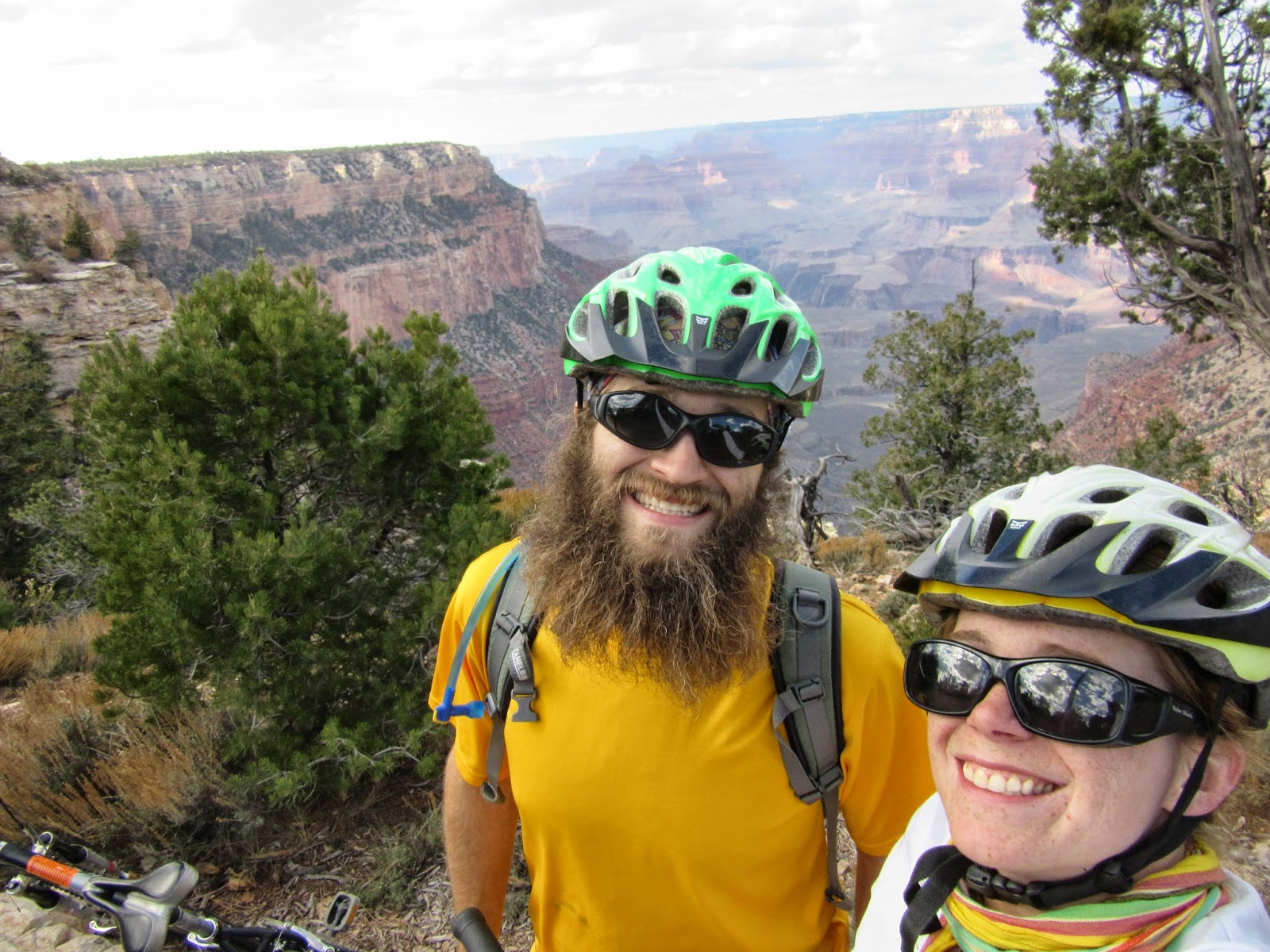 After returning our bicycles we went to the Grand Canyon grocery store.  I was blown away by this.  It was an actual grocery store IN the park.  The other national parks that I've been to have had gift stores and general stores with some grocery options, but this Grand Canyon number was something else.  They even had a holiday aisle with Halloween costumes for sale.  We bought souvenir patches and some additional food supplies for our final days in the park. 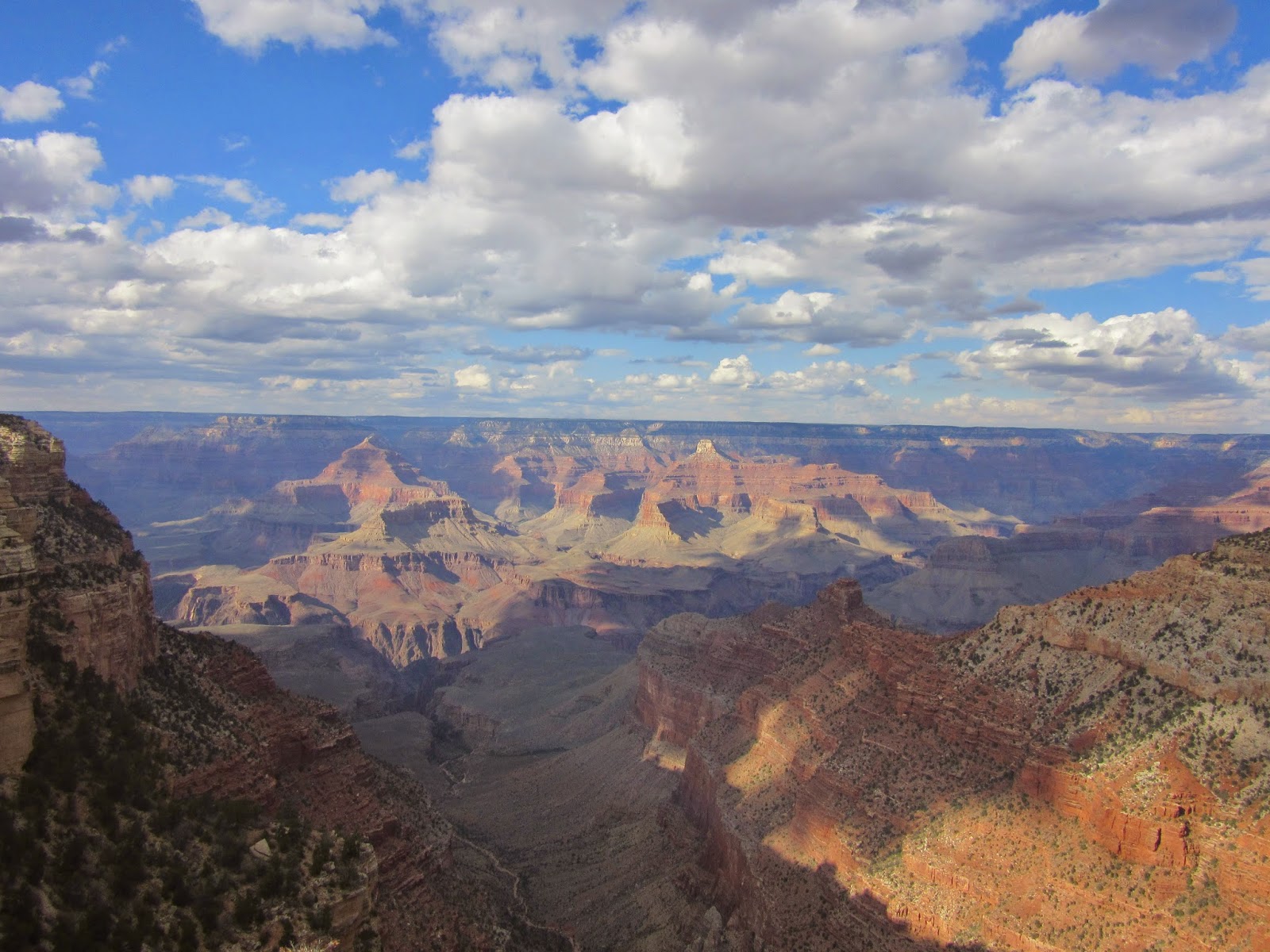 Though we were quite certain we'd miss sunset we decided to hike back out to Shoshone Point again, since we'd enjoyed it so deeply the previous day.  It surely didn't disappoint.  We stayed until well after dark watching the canyon gradually fade into the blackness.  Then we hiked out in the starlight.  The trail was wide and smooth and bordered by forest so we weren't worried.  The thought of stepping on a tarantula in the dark was about the worst part.  Matt and I found our eyes playing tricks on us as we walked back in the dark.  We both sensed a red glow around us, almost like we were using a red-light headlamp, but we weren't.  It was just the darkness.  It was quite strange and bit eerie.  Hiking in a red cloud through a dark forest.... 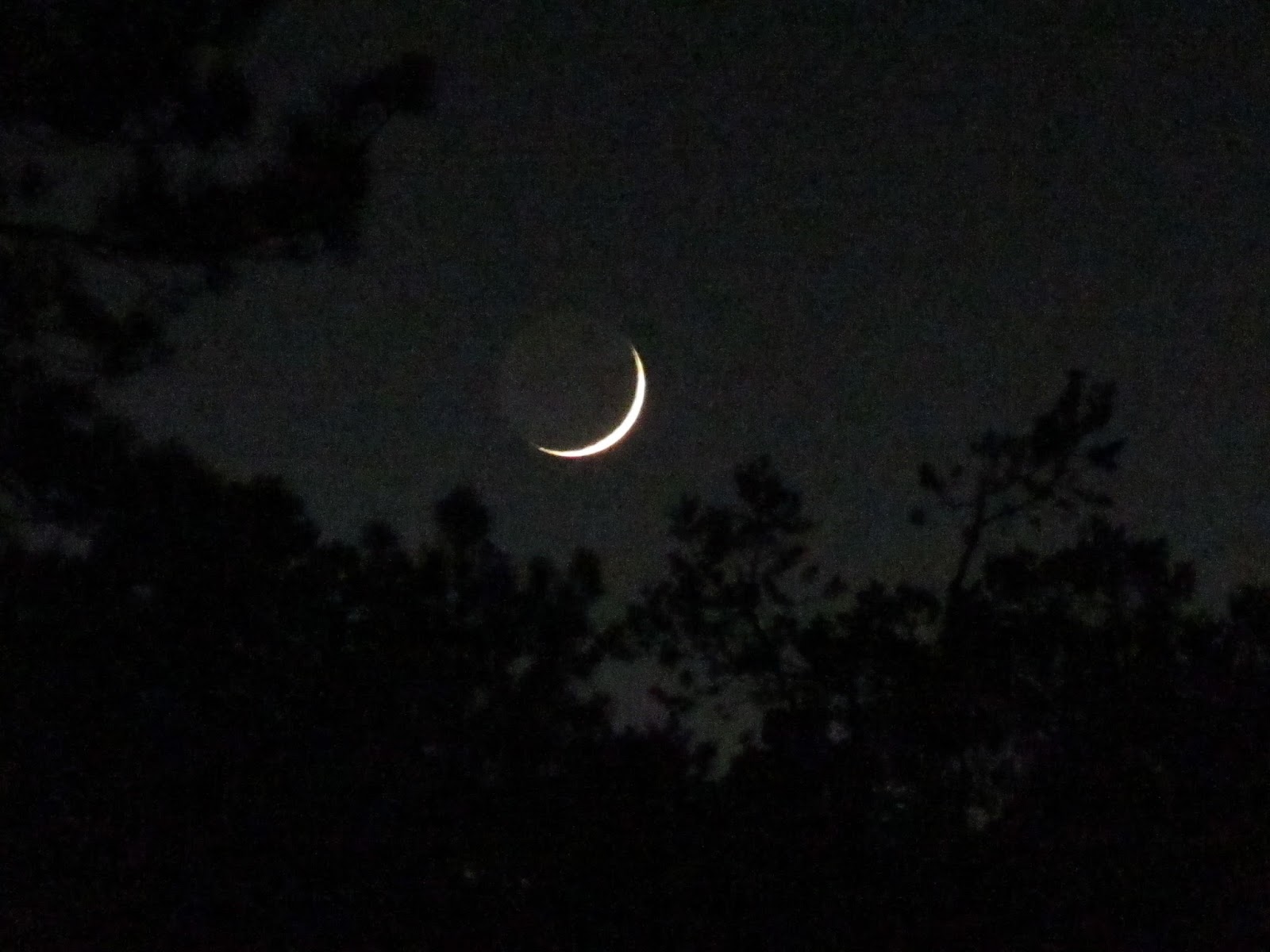 Back at camp we found the darkest corner we could and lay on the ground gazing at the myriad of stars.  The Milky Way was spectacular as it soared through space overhead.  We saw a UFO (whether you believe in alien life or not it was most certainly an unidentified flying object).  At first we thought it was a satellite.  It was moving slowly and steadily like satellites do.  But then it changed size (growing smaller) and brightness (growing dimmer) and then color (growing red).  And then, most surprisingly, it disappeared completely.  We'd never seen a plane or a meteor or a satellite do that before.

At last we decided it was time for a campfire followed by bed.  The coyotes yipped in the night again.  I woke Matt for it this time.  What a fantastic eleventh day!  Better than I had even hoped.
By BLD in MT