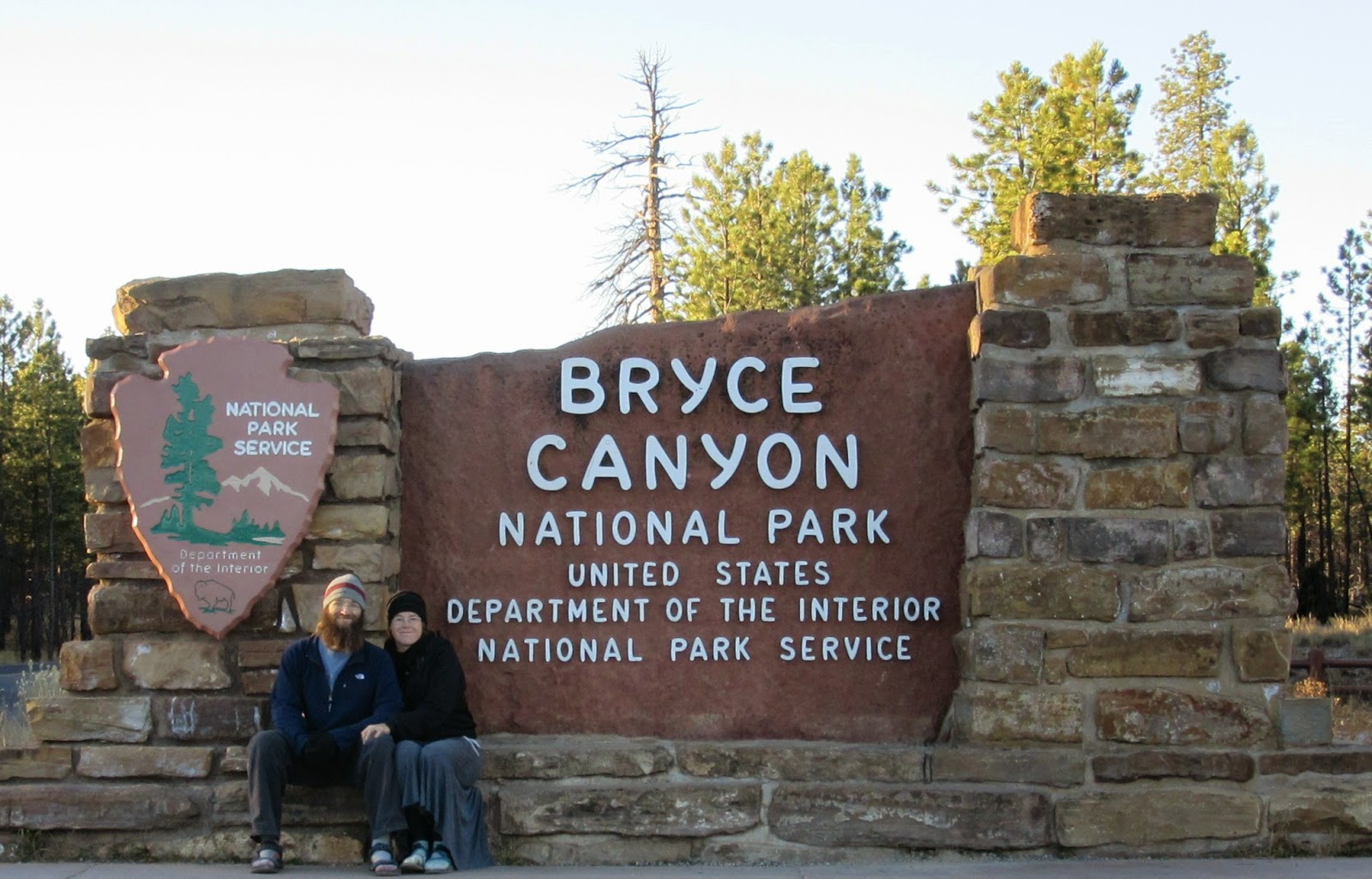 We woke on our last Bryce morning and immediately set to making breakfast and breaking camp.  We've long had a routine of Matt cooking while I set up or take down the tent and sleeping mats and bags.  Its perfect.  By the time I am done he's got a meal to set in front of me.  Then we were on our way to the last stop on our journey--Grand Canyon National Park. 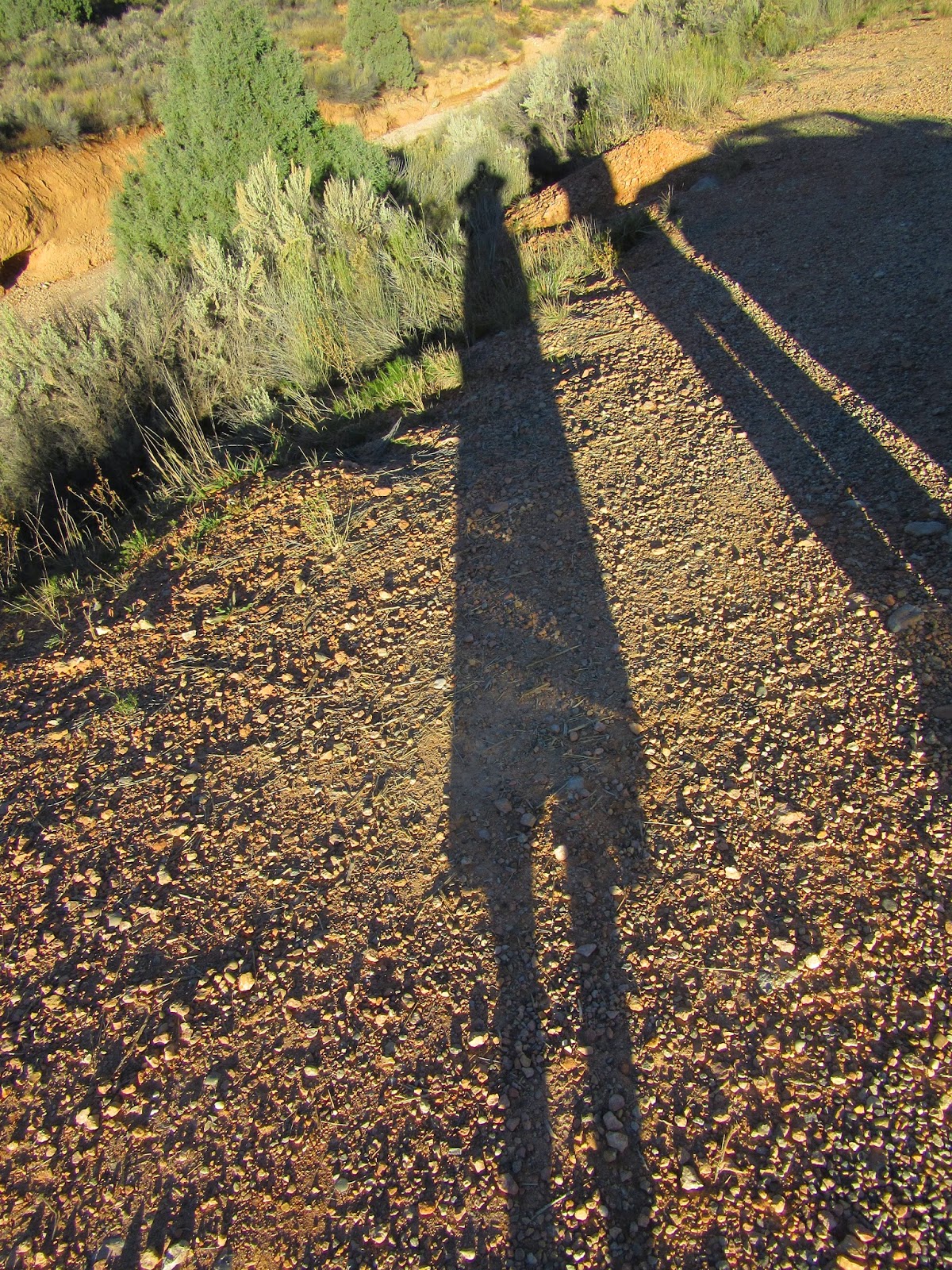 It was a lovely day for driving with the top down.  The first part of our day retraced some roads we'd taken to get to Bryce Canyon National Park, but soon the road and landscape was all new.  There was some forested areas, but eventually a wall of red stone lifted up from the earth paralleling the road a ways.  Endless scrub desert to one side, red mountain to the other.  Quite striking and different than my homeland.

We saw a German bakery and thought we ought to stop in for a little second-breakfast.  We settled on a humongous Turkish flatbread which we devoured half of rather quickly.  It was so light and fresh.  Yum.  We somehow managed to save the other half for later. 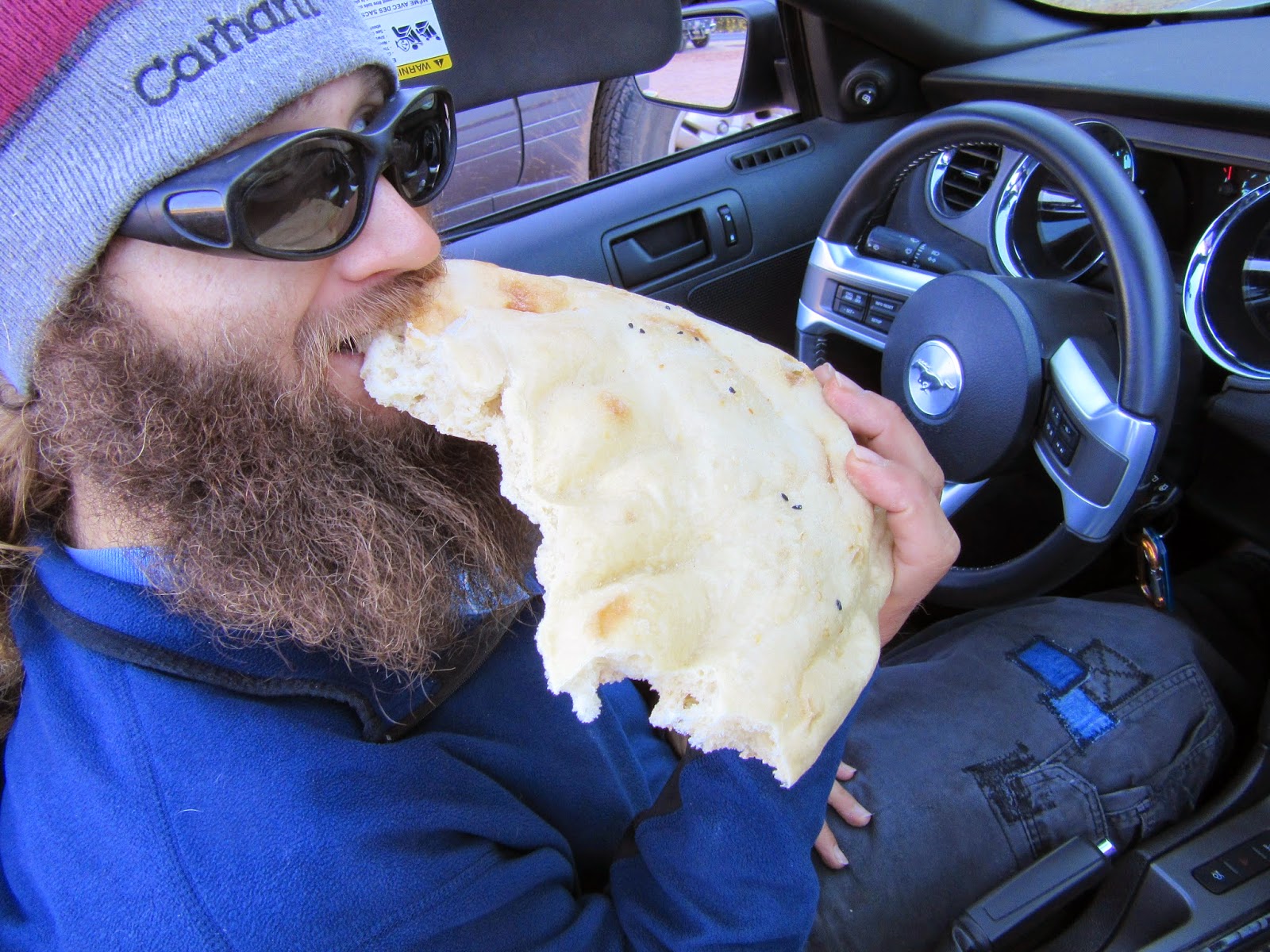 My first glimpse of the Colorado River would be at Navajo Bridge.  We stopped, walked the bridge, and checked out the open-air stalls of a few Navajo artisans.  Navajo Bridge was build in 1927-28 and is now only used for foot traffic.  It parallels a more modern automotive bridge.   Navajo Bridge is 467 feet high and 834 feet long.  The view was lovely, but gave not even a hit of the grandeur that was to come as the river wound and carved that canyon so rightfully called grand.  It is the closest I'd be to the Colorado River itself though. 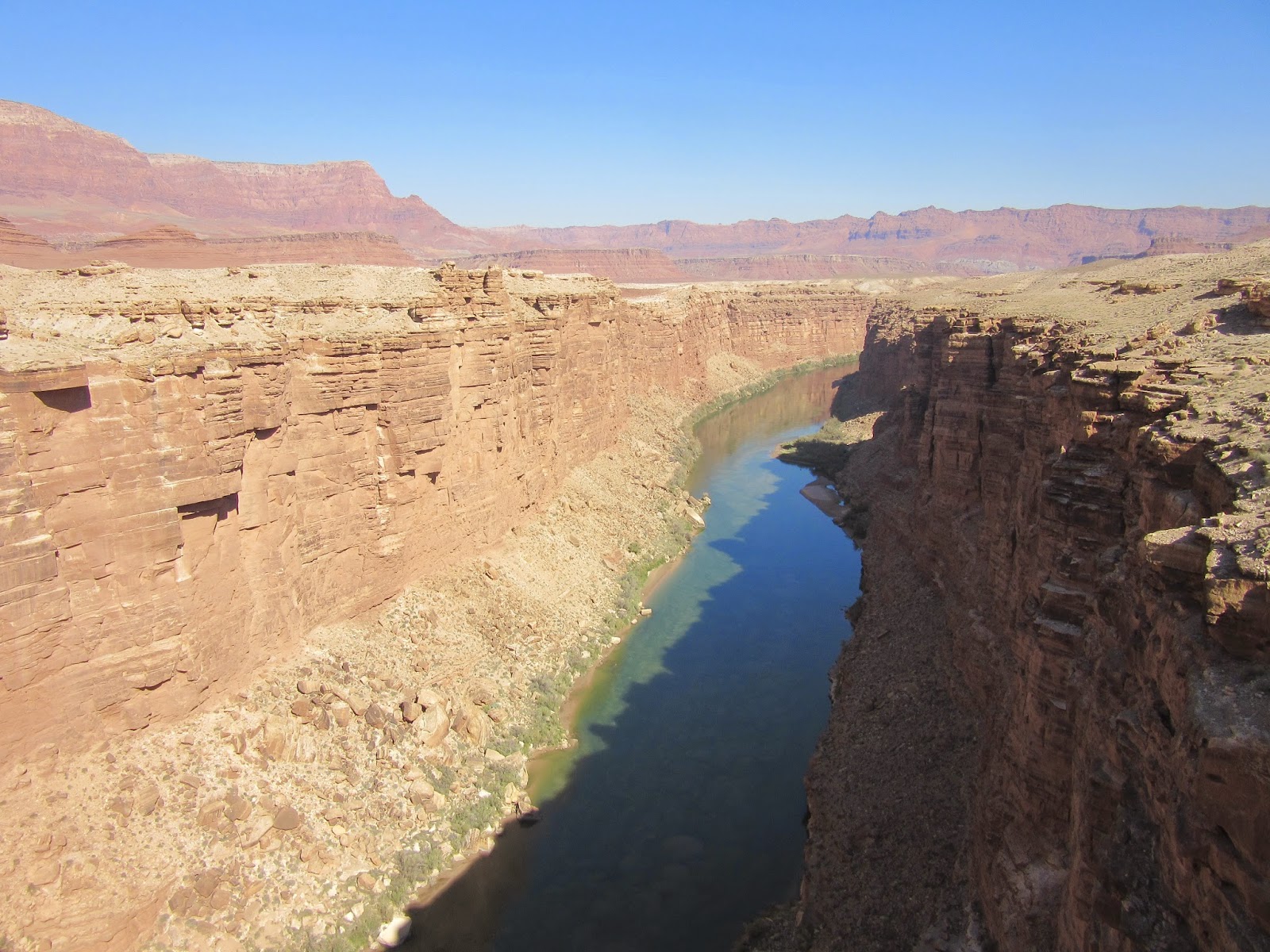 We got back in the car and continued to drive through the open, expansive desert county.  It was very broad and rather monochromatic, not the most beautiful place I've been to, but certain with a beauty all its own.  Houses just appeared out in the middle of nowhere, just one road leading to it from the highway.   I had to wonder about living somewhere so remote.  It seemed lovely in October, but what about July?  Of course, I've been to place in Montana just as remote which were lovely in July, but what about October?  What a world! 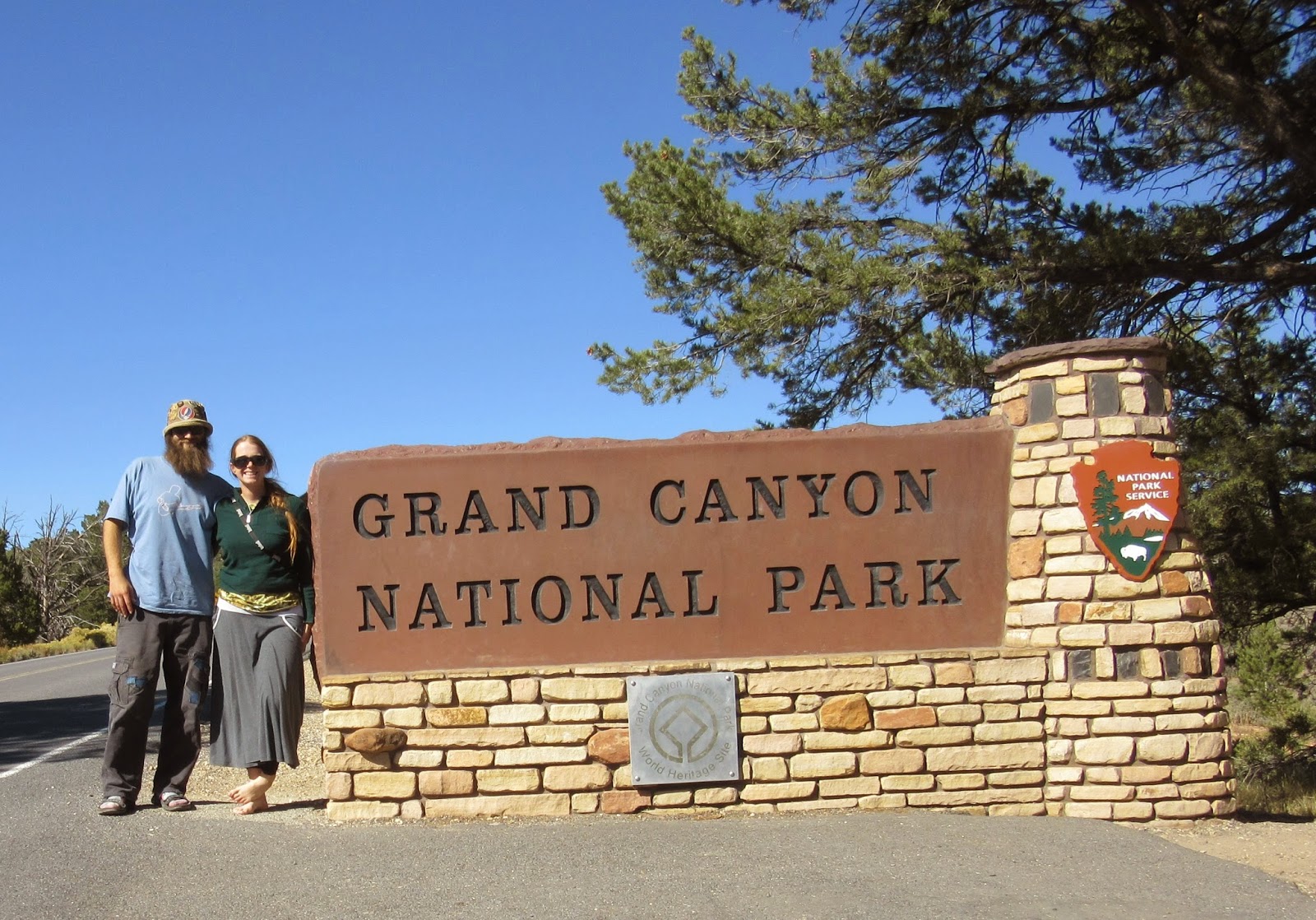 Our first stop in Grand Canyon National Park--and my first good, long look at the serpentine megalith--was at Desert View.  We had lunch at the little picnic area with some western bluebirds for company in the nearby trees. 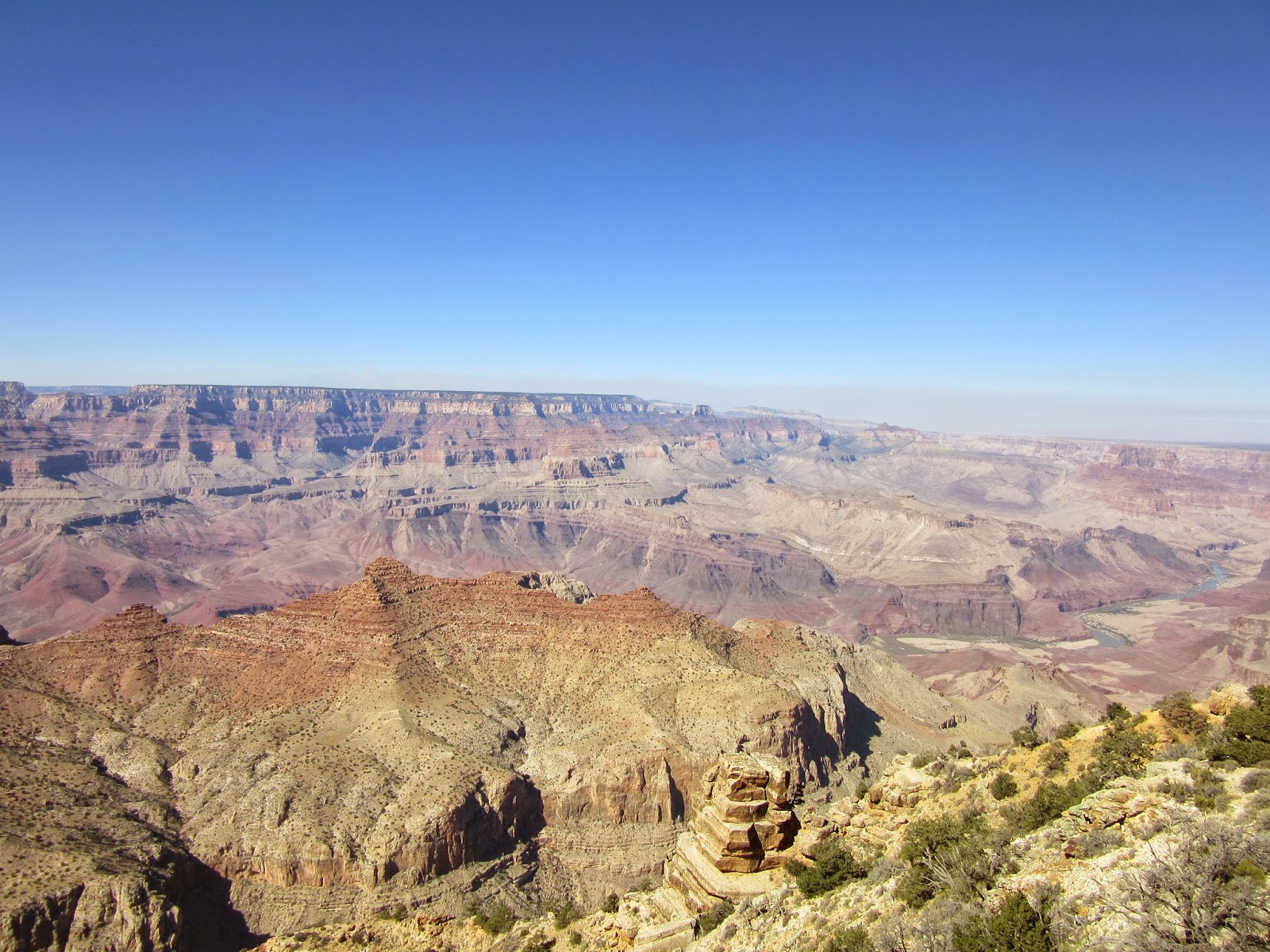 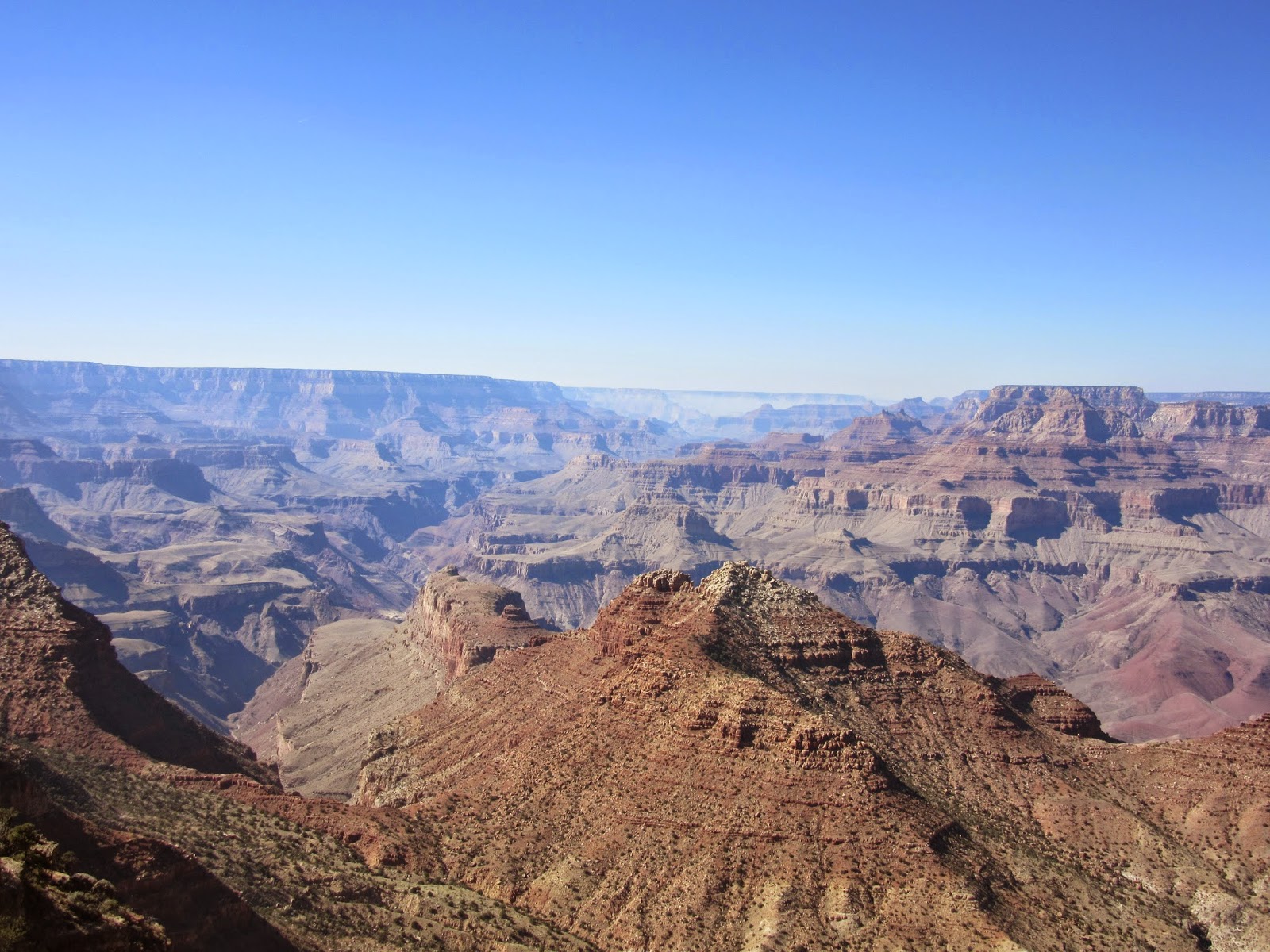 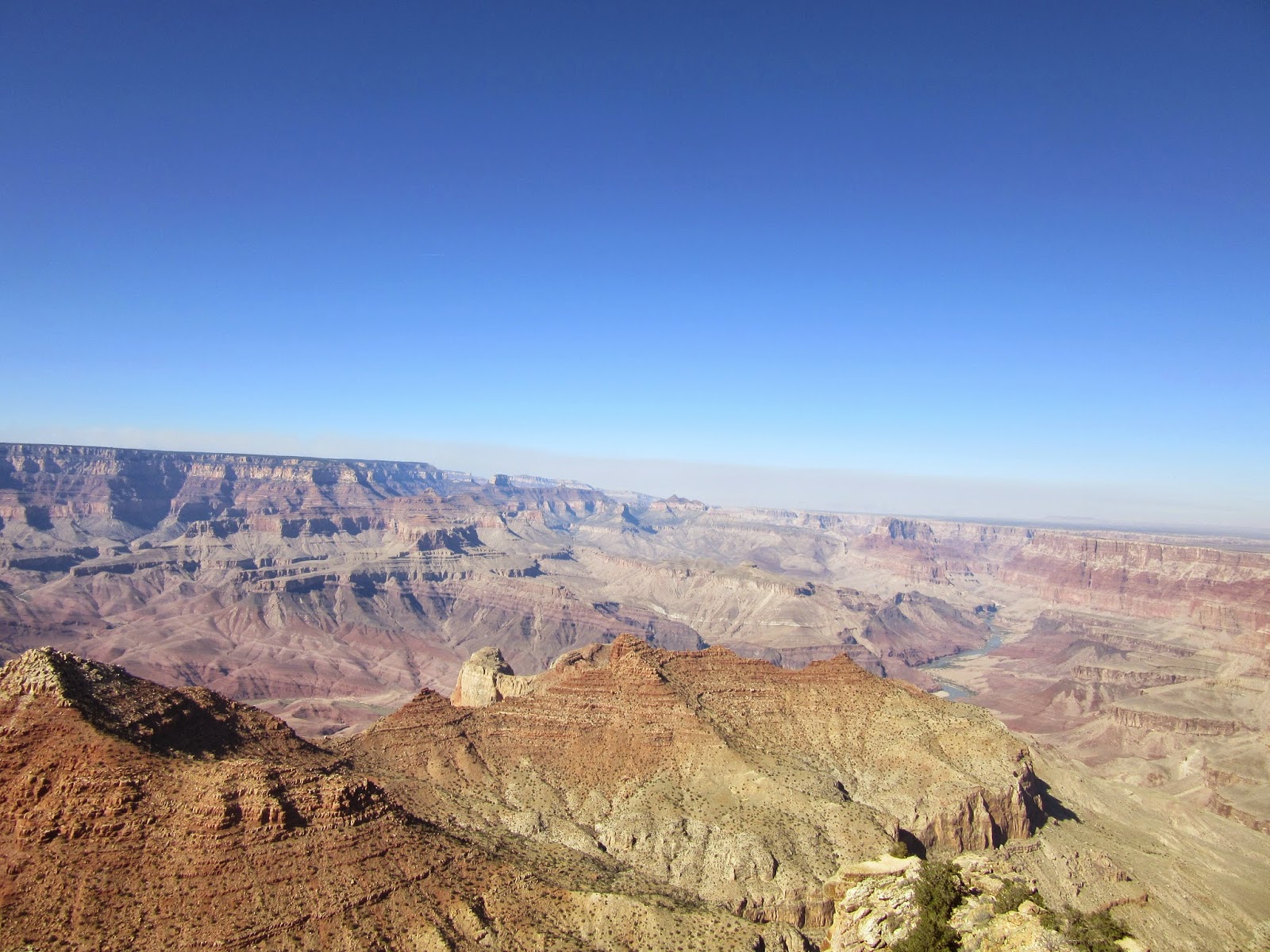 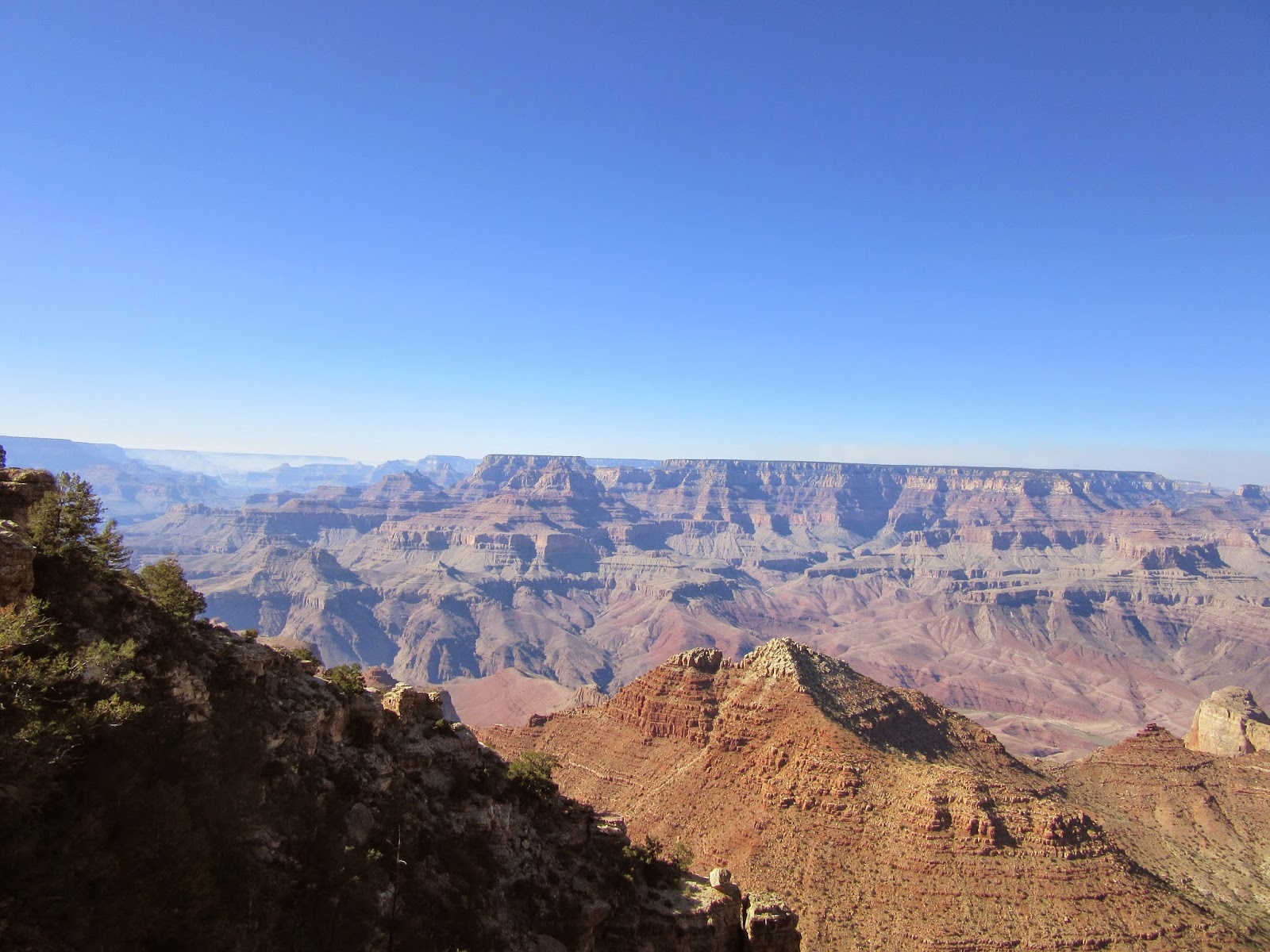 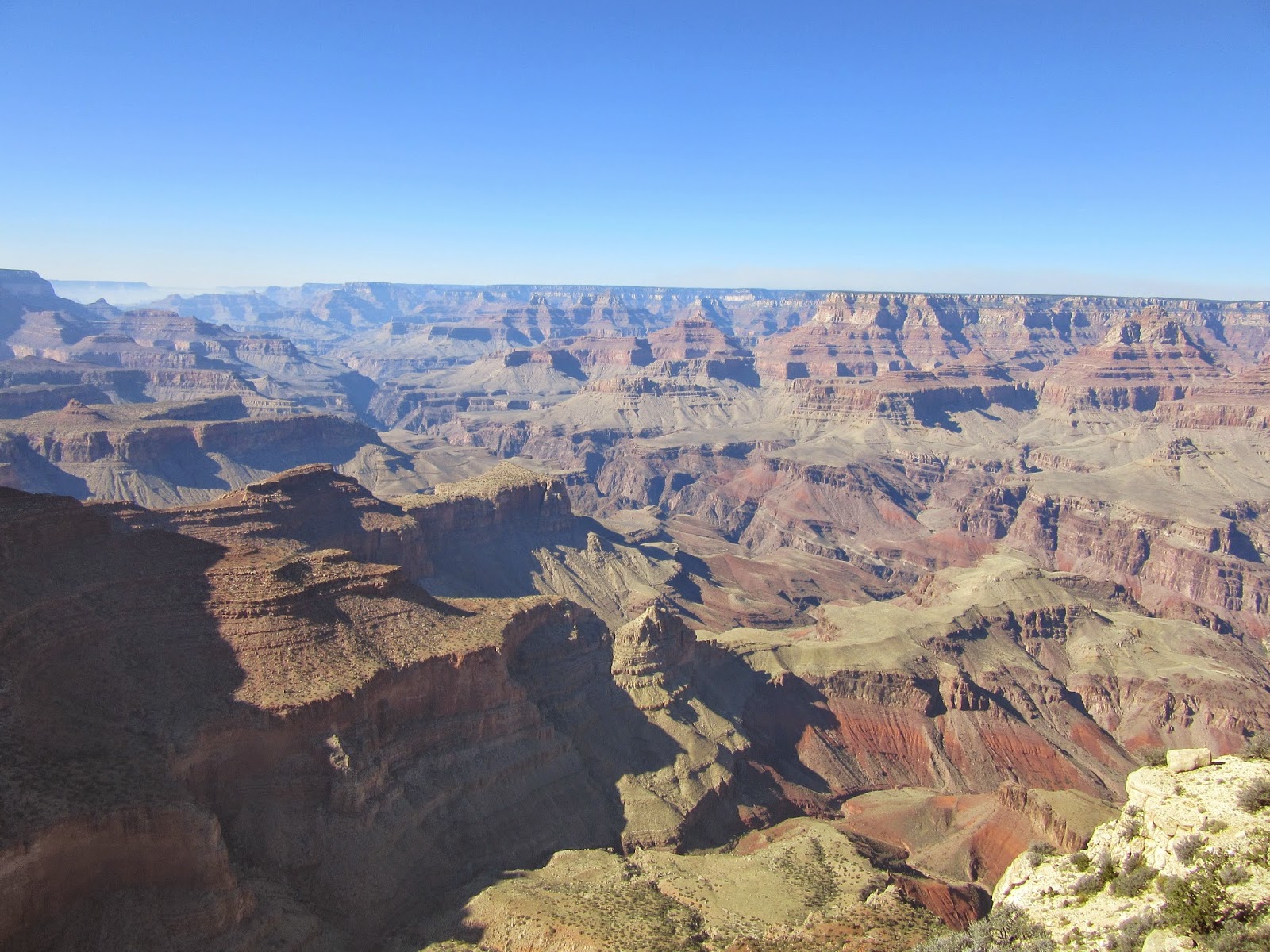 At Desert View there is a 70 foot tall re-creation of Native American-style lookout tower.  It is a remarkable structure based upon ancient designs of the Peublo people--though much smaller.  There was a tremendous amount of detail  in its construction from the authentic Indian paintings adorning the walls, to the rawhide wrapped banister, to the intricate masonry using native stone.  It was designed by a woman named Mary Colter and completed in 1932.  Mary Colter was responsible for the design of several structures in the park.  I am glad.  Her work blends splendidly with the surrounding landscape--ideal, in my opinion, for a place intended to be as unchanged by human beings as possible. 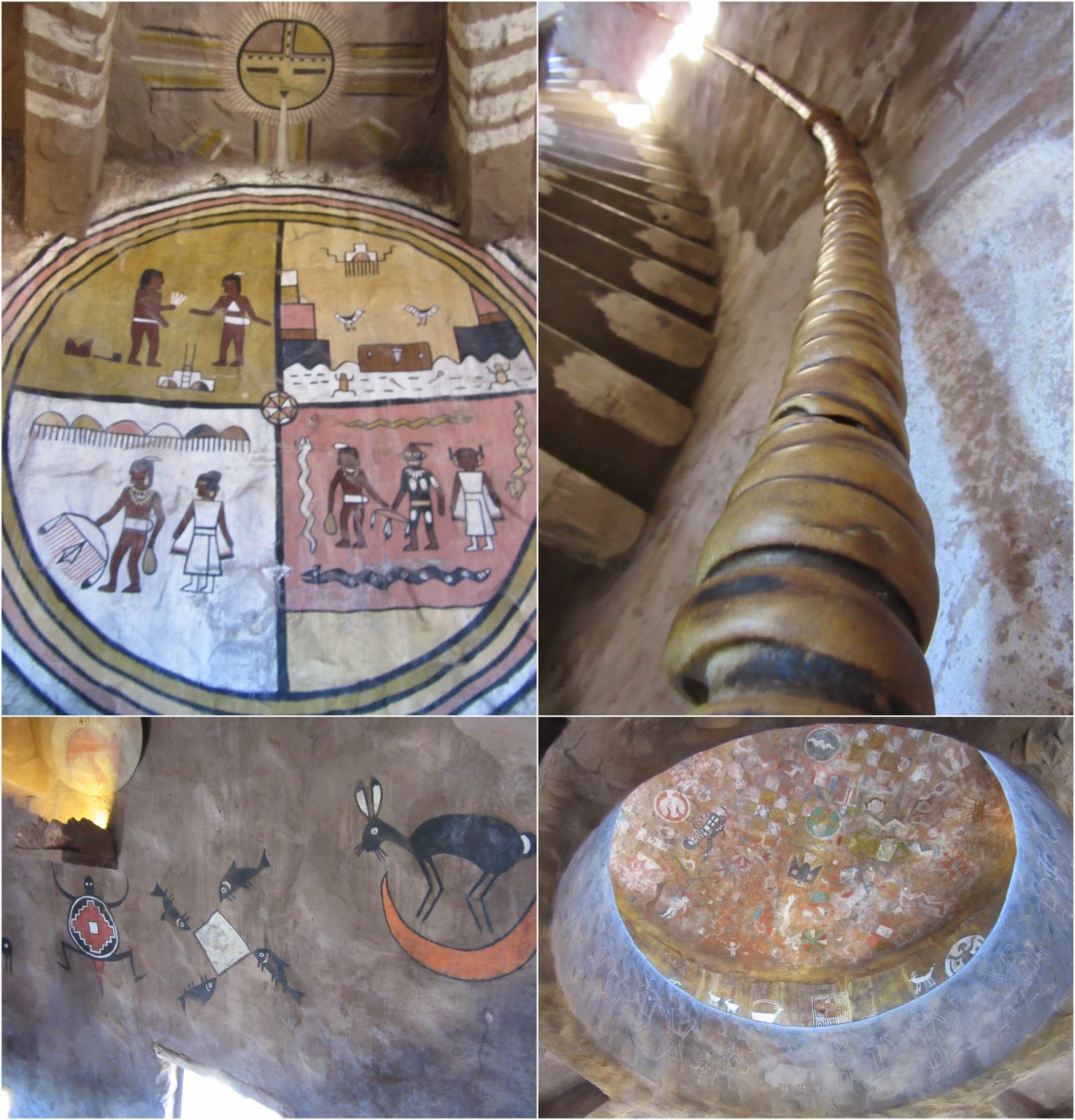 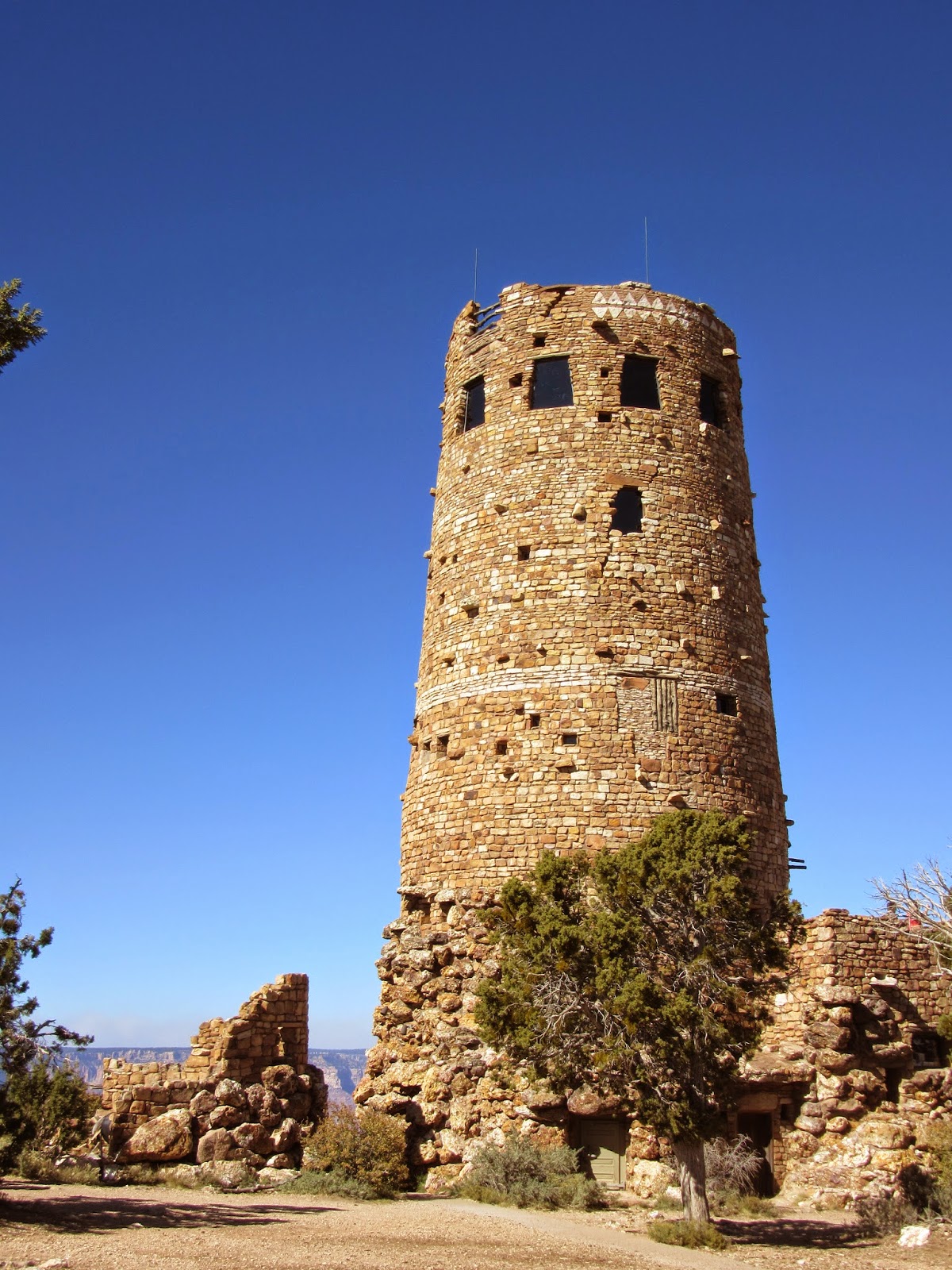 Departing from Desert View we continued along, stopping at overlooks here and there including Moran Point.  There were quite a few people, more than at the other two parks we'd visited, I think.  But, we'd read about an underutilized and very short hike and thought it would be a perfect way to spend the afternoon enjoying the canyon without the crowds.  Since we'd had to drive to the park it was already afternoon, too, so we only had a few hours before sunset.  The hike to Shoshone Point promised to be perfect for our timeframe.  It was marked as such an easy, flat, smooth hike that I wore my sandals.  My feet were aching for fresh air after being penned up in boots for the past week.  So, of course, this is when we'd cross paths with the tarantula.

I noticed the spider's movement when it was about 12 inches from my bare toes.  It was sauntering down the middle of the path, just like I was.  I jumped back in an moment of automatic reflex and horror.  Jeepers!  Of course, I wouldn't be wearing my nice, protective leather boots!  Once I was over the initial shock it was an interesting wildlife encounter.  Matt and I followed it a ways.  It moved with direct purpose.  We'd later learn from the woman at the bicycle rental shop that we'd made it just in time for the "tail end of tarantula migration season."  The woman at the bicycle shop assured me that they couldn't hurt me.  I told her I wasn't worried they'd bite me.  I was worried they'd touch me!  I don't care for spiders.  As such, while I found the whole thing unusual and exciting I was--and am--certainly grateful that my home is in a place with winter.  A place where there is no "tarantula migration season."

Another oddity we'd notice on this first hike to Shoshone Point were strange clumps in the boughs of the evergreen trees.  The clumps, too, were green, but clearly a different shade and shape as the rest of the tree's greenery.  We'd subsequently learn at the Visitor's Center that it is a tree disease called Witches' Broom.   We also saw and heard the calls of a mixed flock of Red-Breasted and White-Breasted Nuthatches from among the branches. 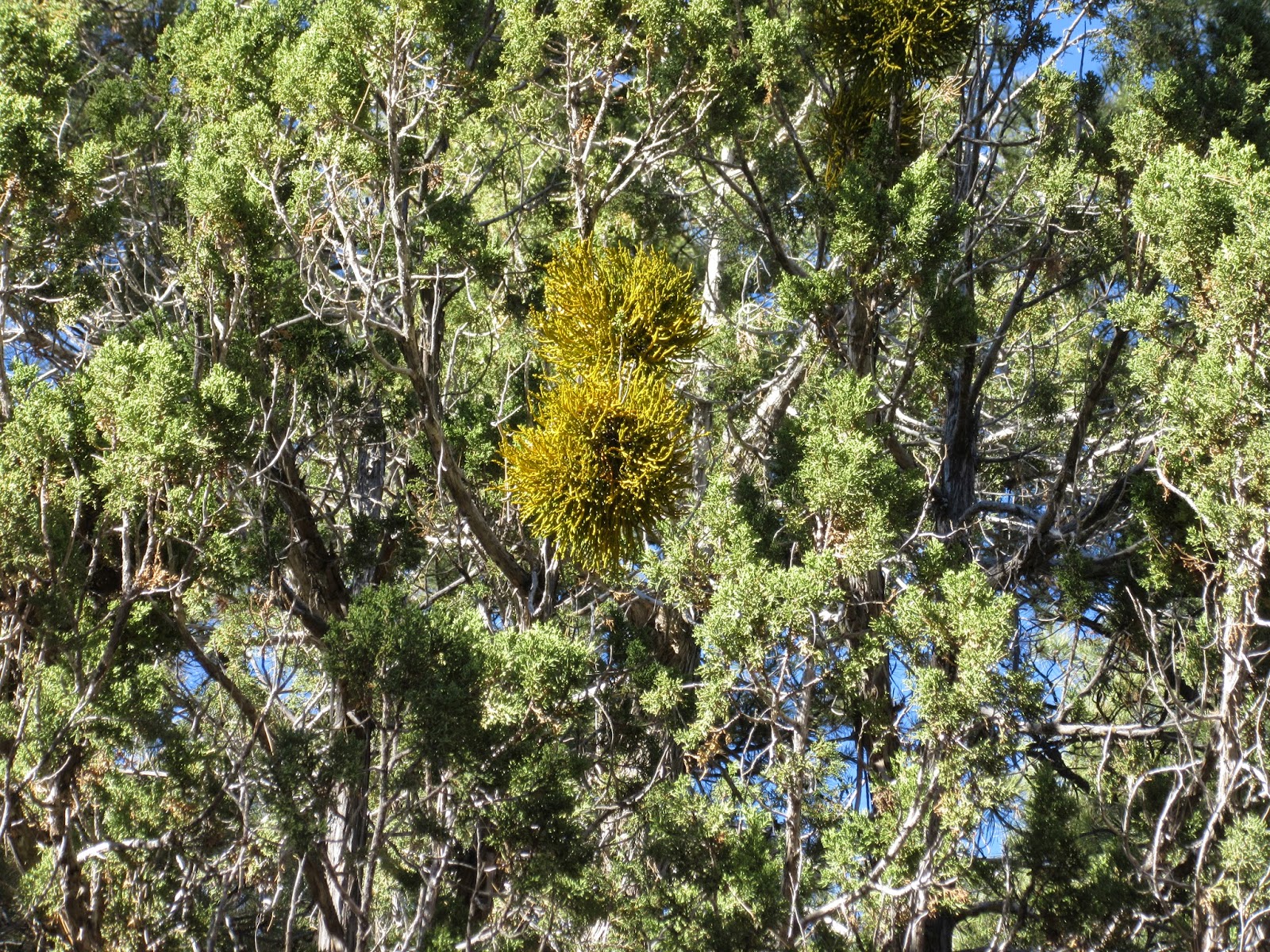 In no time at all we'd traversed the mile of road (the trail is actually a narrow, dirt road through the forest which is closed to traffic at this time of year and used for park authorized canyon rim weddings in the peak season) and emerged from the trees.  And there was the magnificent Grand Canyon, spreading out before us. 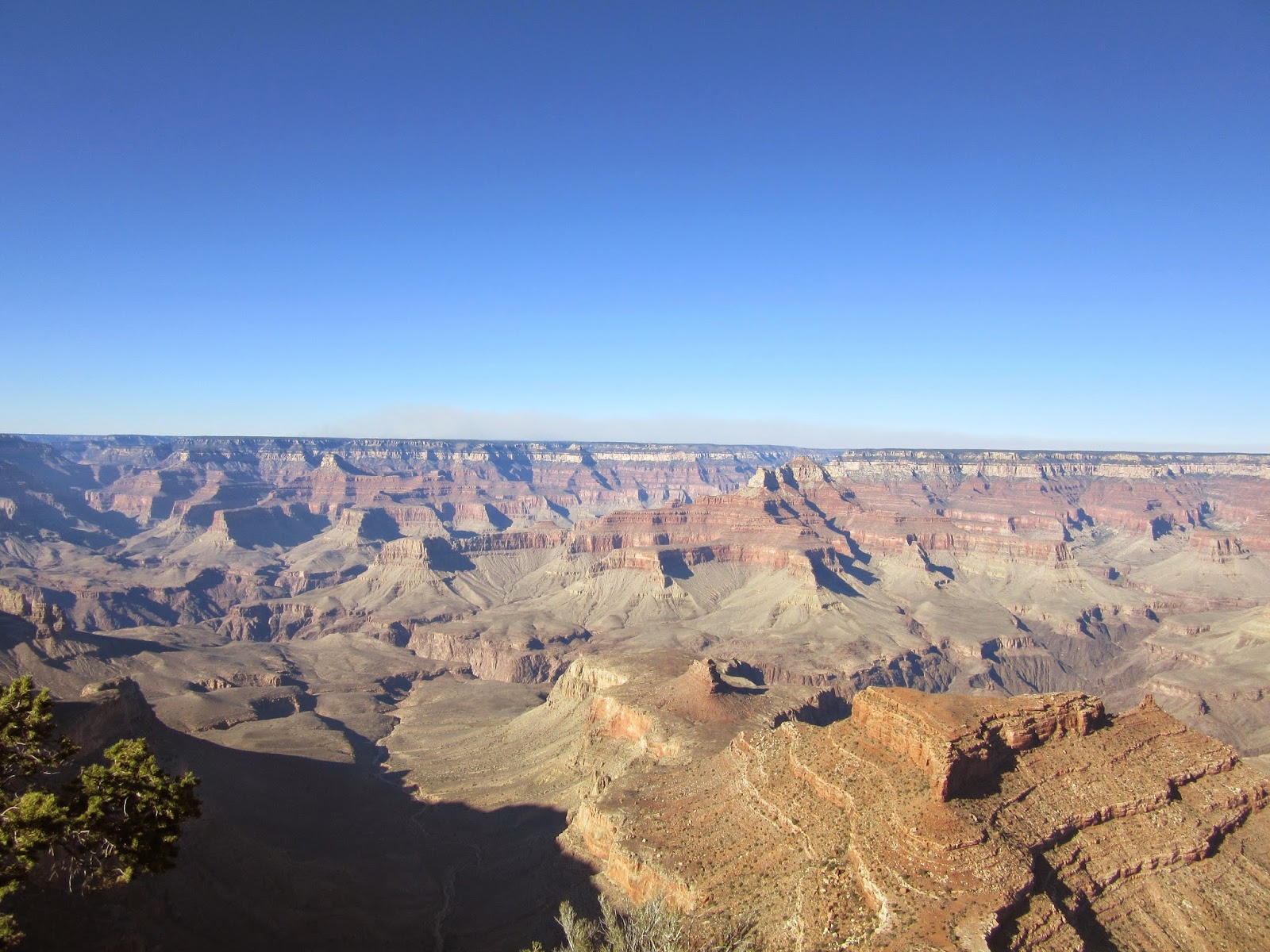 Its funny because when we were driving that morning I had been asking Matt about it.  He had gone with his family a few times in his youth.  He said they'd never done any hiking there though.  So, somewhat incredulous, I asked, "So you'd just look at it?  For how long?  Like hours?"  It seemed like an awfully long drive just to go look at something.  Well, I was wrong.  It didn't take much time for me to finally get it out at Shoshone Point. 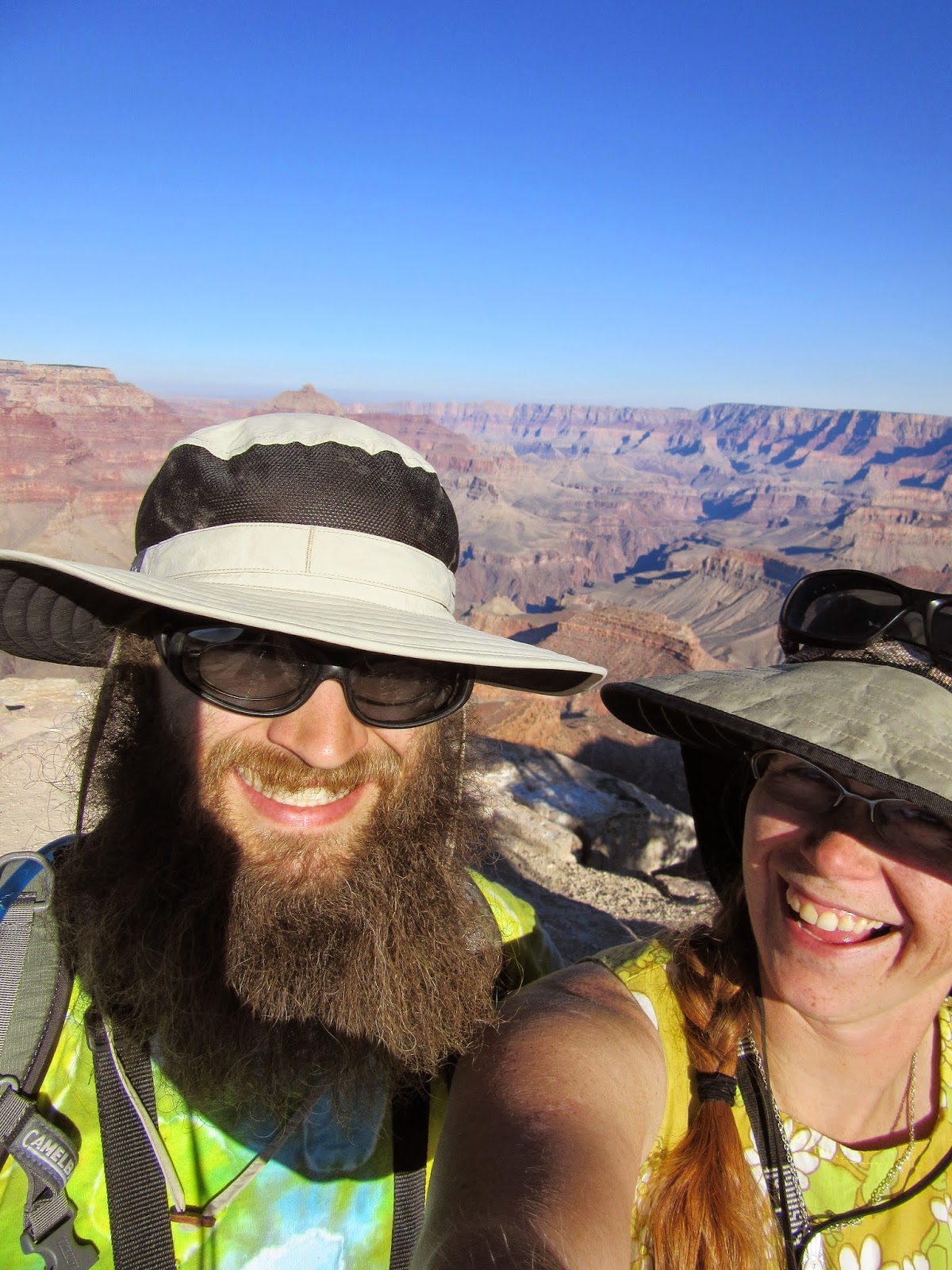 First off, though we'd end up at Shoshone Point each of the three days we were there, we never had more than six people as company.  It was like a private overlook in comparison with the overlooks right off the road. 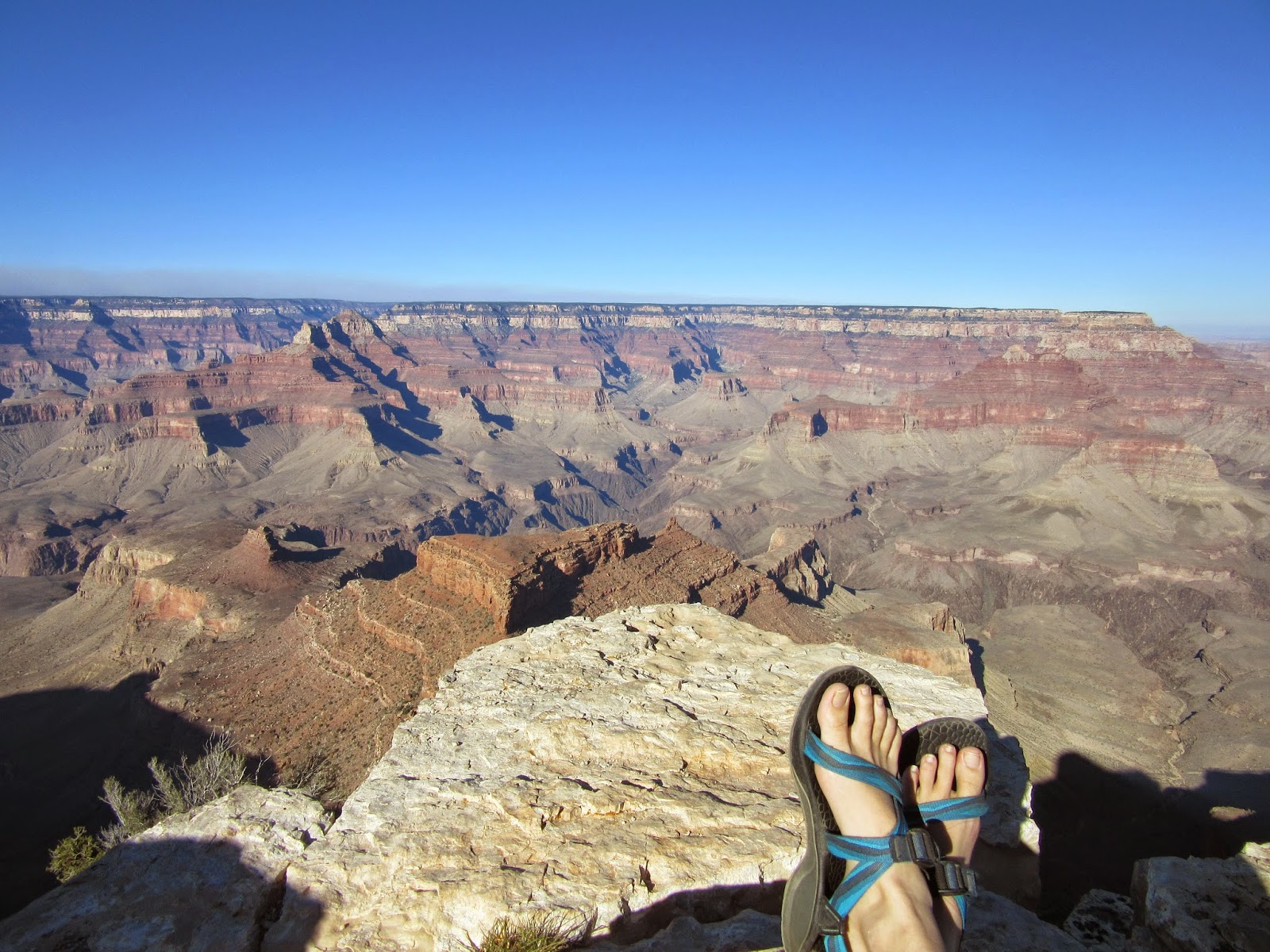 We sat right up near the edge.  We gazed into the distance, into the depths, into ourselves.  I traced the course of one rugged side-canyon after another with my eyes until I felt the expansive, yawning bigness, the gaping Grand-ness pulling me in like a force.  The the scale and beauty and foreignness!  Oh!  I felt dizzy and elated and overwhelmed all at the same time.  I cried in celebration riding these waves of unfamiliar sensation and emotion.  We had to move back a bit from the ledge.  I needed the space to sort it all out. 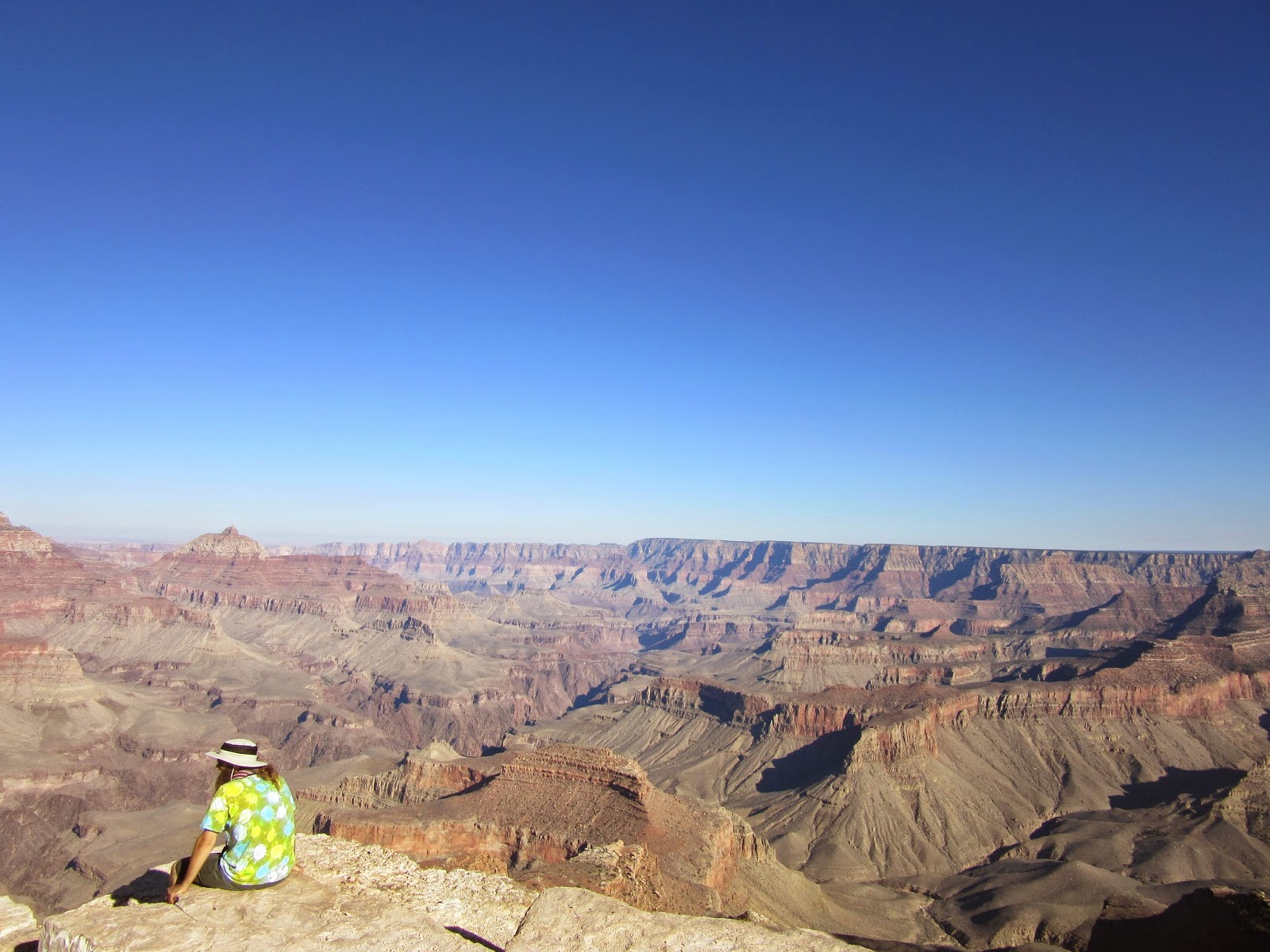 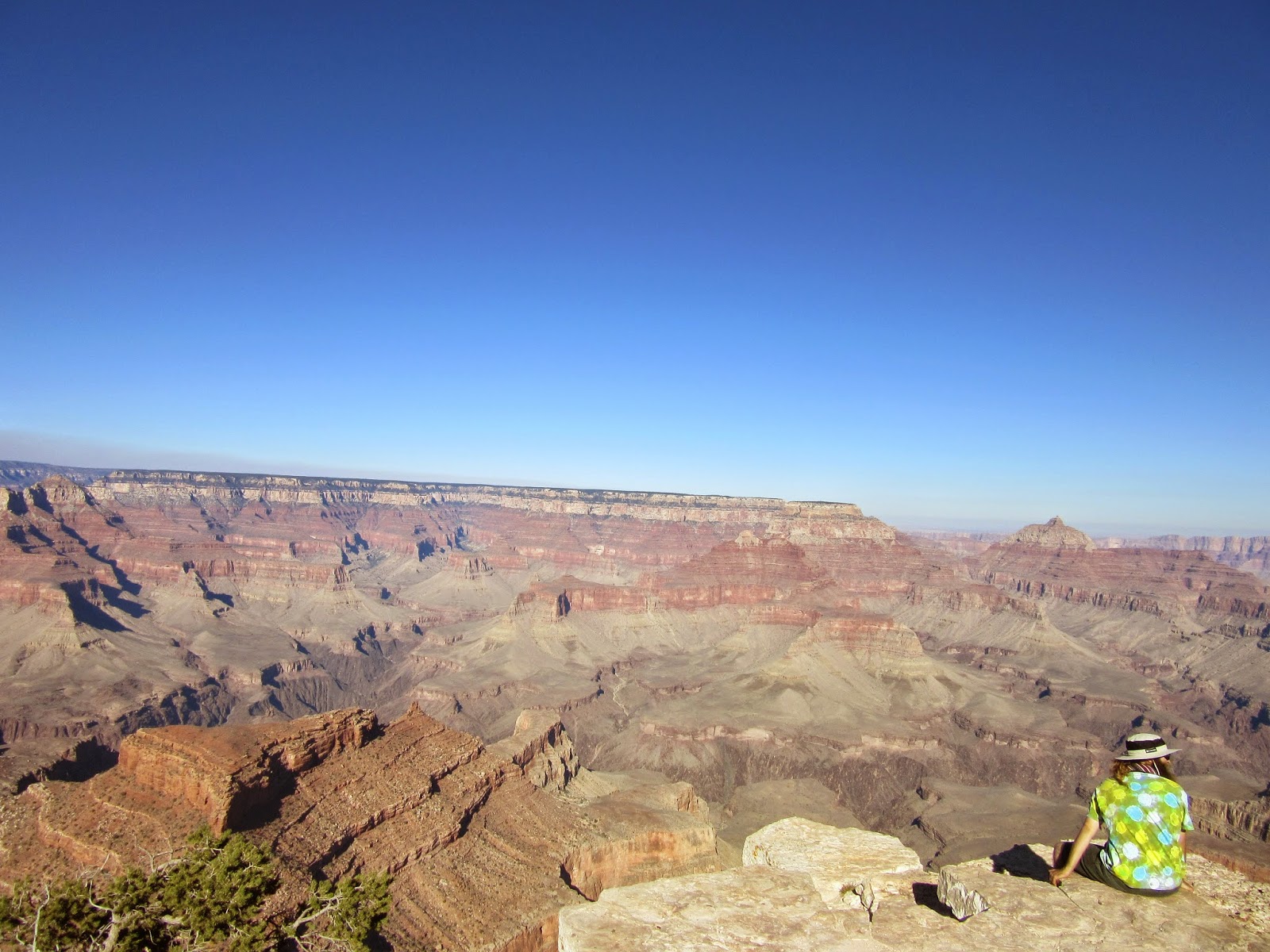 We hiked back out to the car, ready for setting up camp, watching the sunset, and cooking dinner.  On the return hike we noticed not the evergreens so much as the abundance of oak trees.  We're both fans of the smooth lines of oak leaves.  At this point in October they were all, more or less, turned to their autumn hues.  Matt said a few times that he wished we'd have been there a week or two earlier to enjoy the changing of the leaves at their peak. 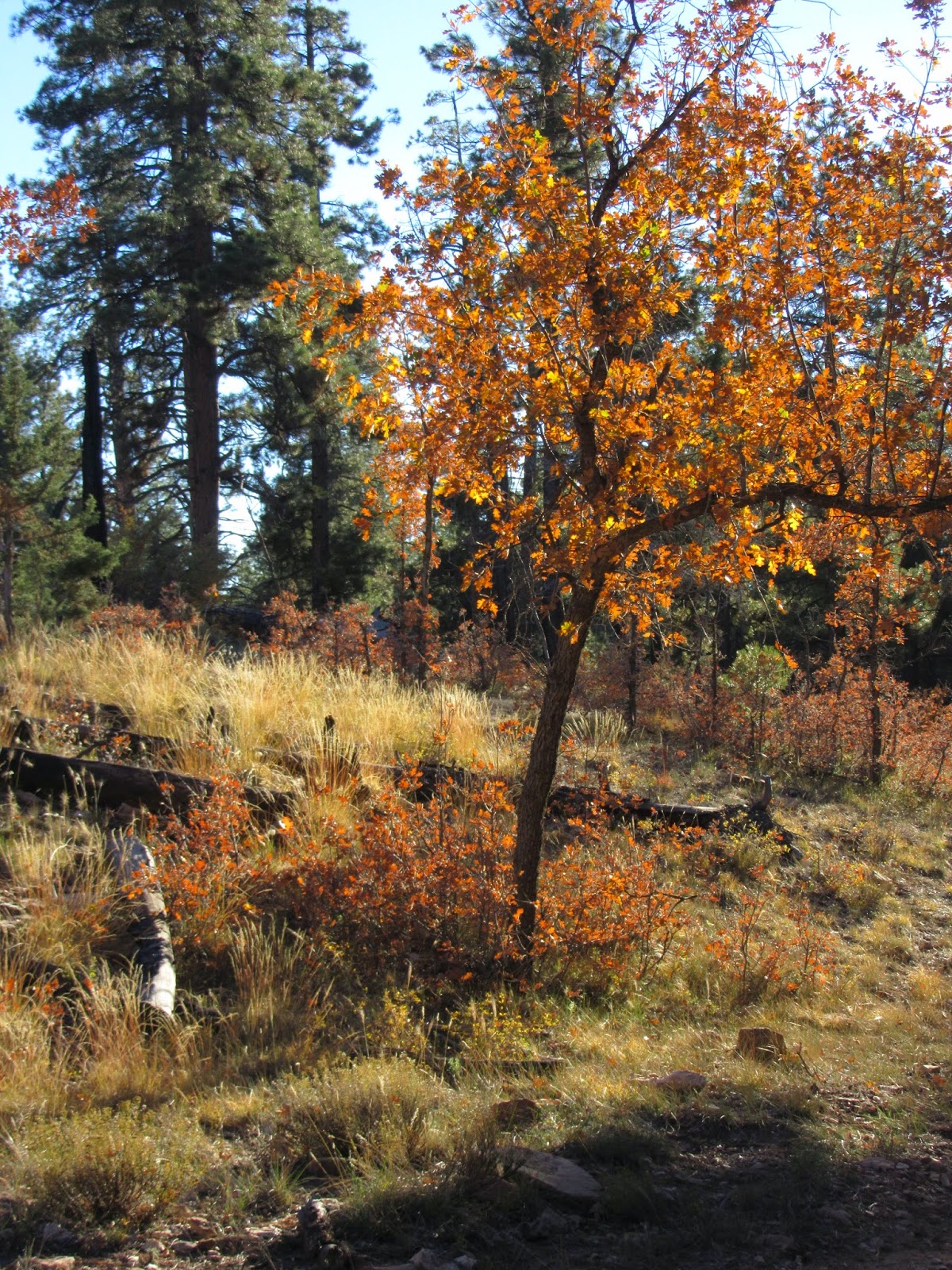 We camped at the Mather Campground.  We immediately got a good vibe of the place when a Gila Woodpecker made itself known on the tree right over our tent.  We'd never seen this woodpecker before.  They don't live up north with us--though they do have some fairly similar looking relatives up there. 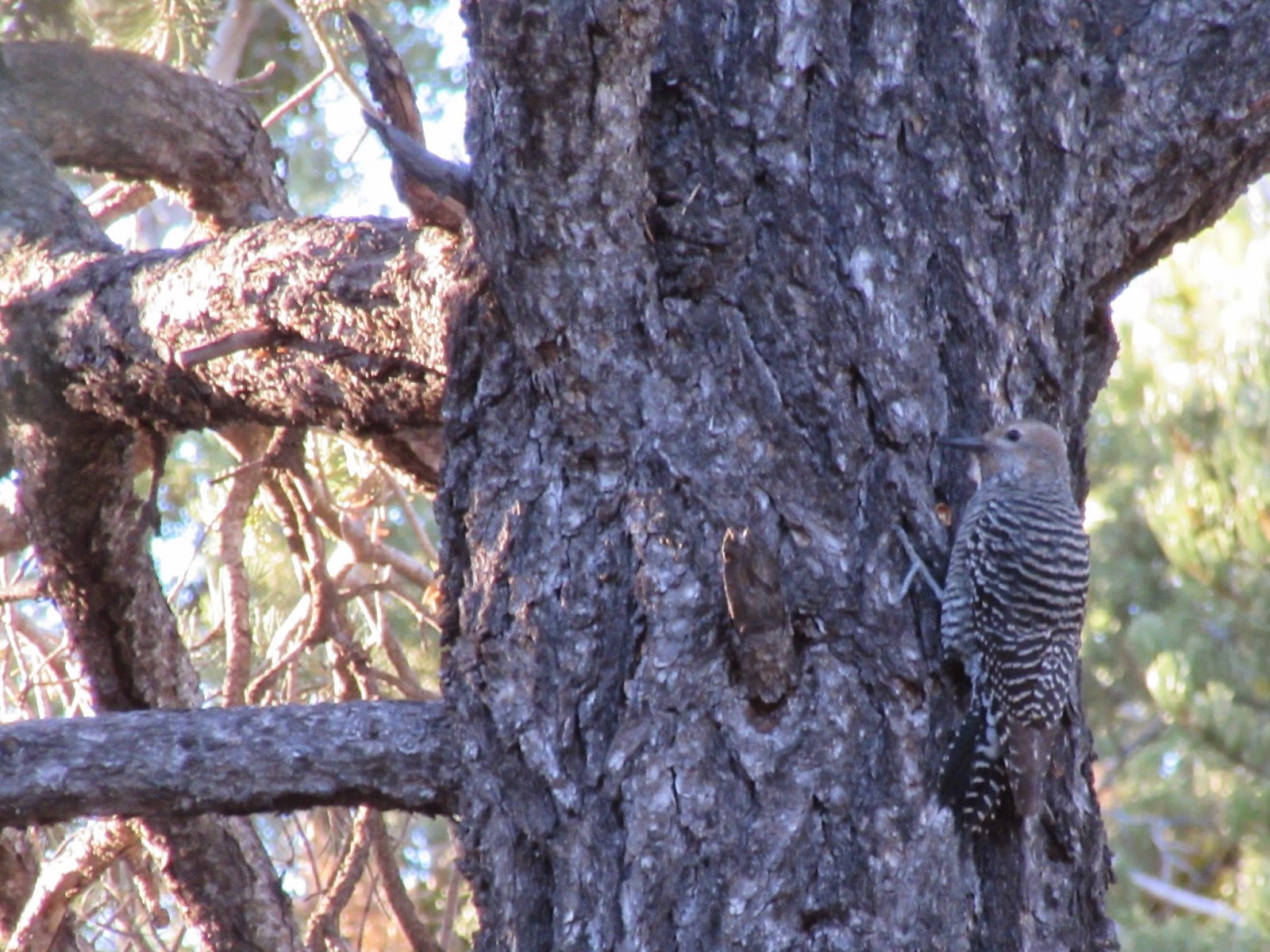 For the sunset we decided to go to Moran Point.  It was certainly an epic view, but I am not keen on jockeying for a viewing spot with a hundred other people.  I was elbow to elbow with people at the railing for the lookout.  Meh, not my idea of fun. 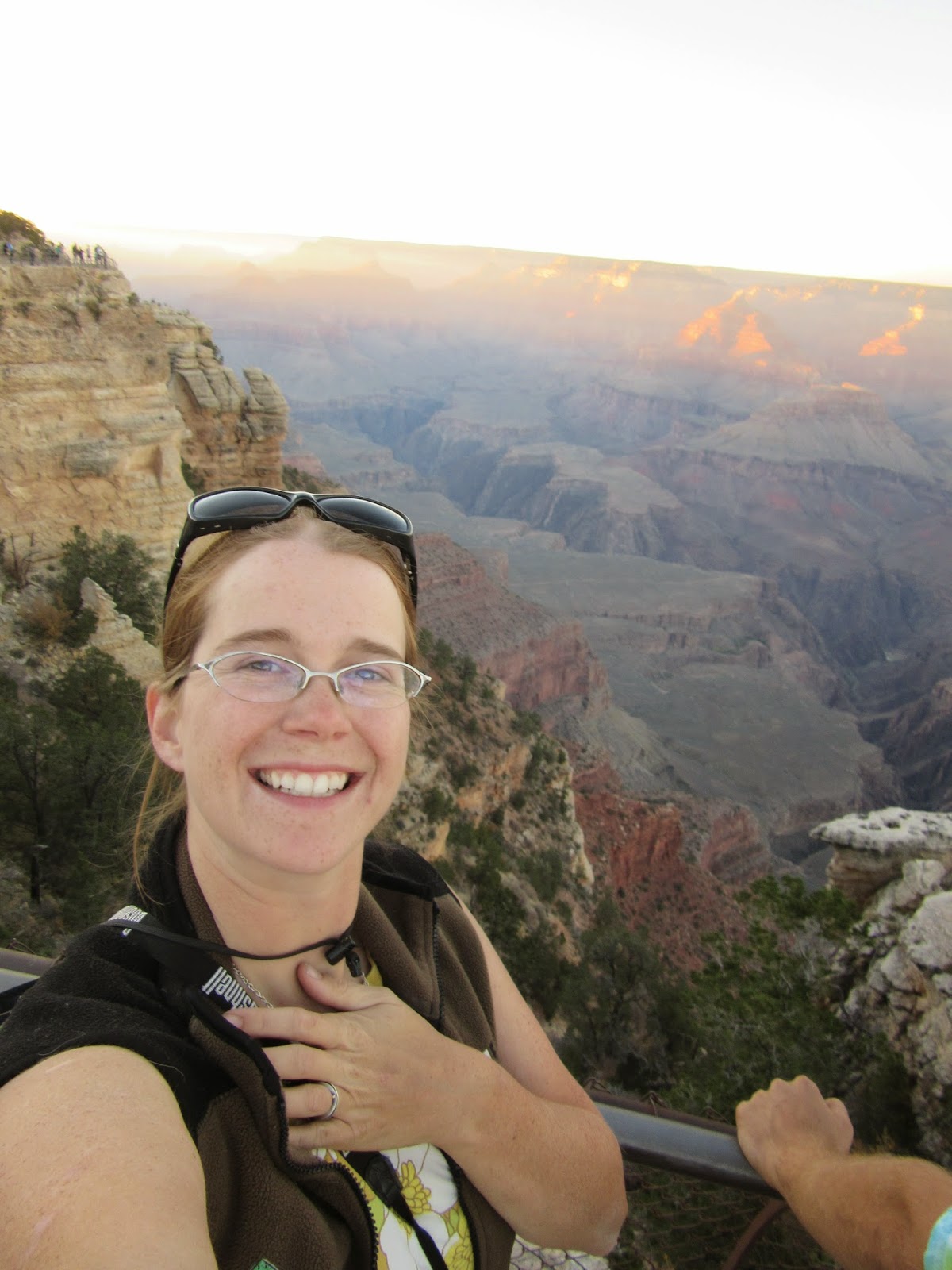 Don't get me wrong though.  The view was extraordinary.  There were wildfires in the area--we'd seen the smoke from the plane and the car--and this really added to the sunset effect on the sweeping canyon vista.  It struck us as looking very much like a Moran painting in its romantic softness.  We felt he would have been pleased with that particular sunset and, crowd or no crowd, so were we. 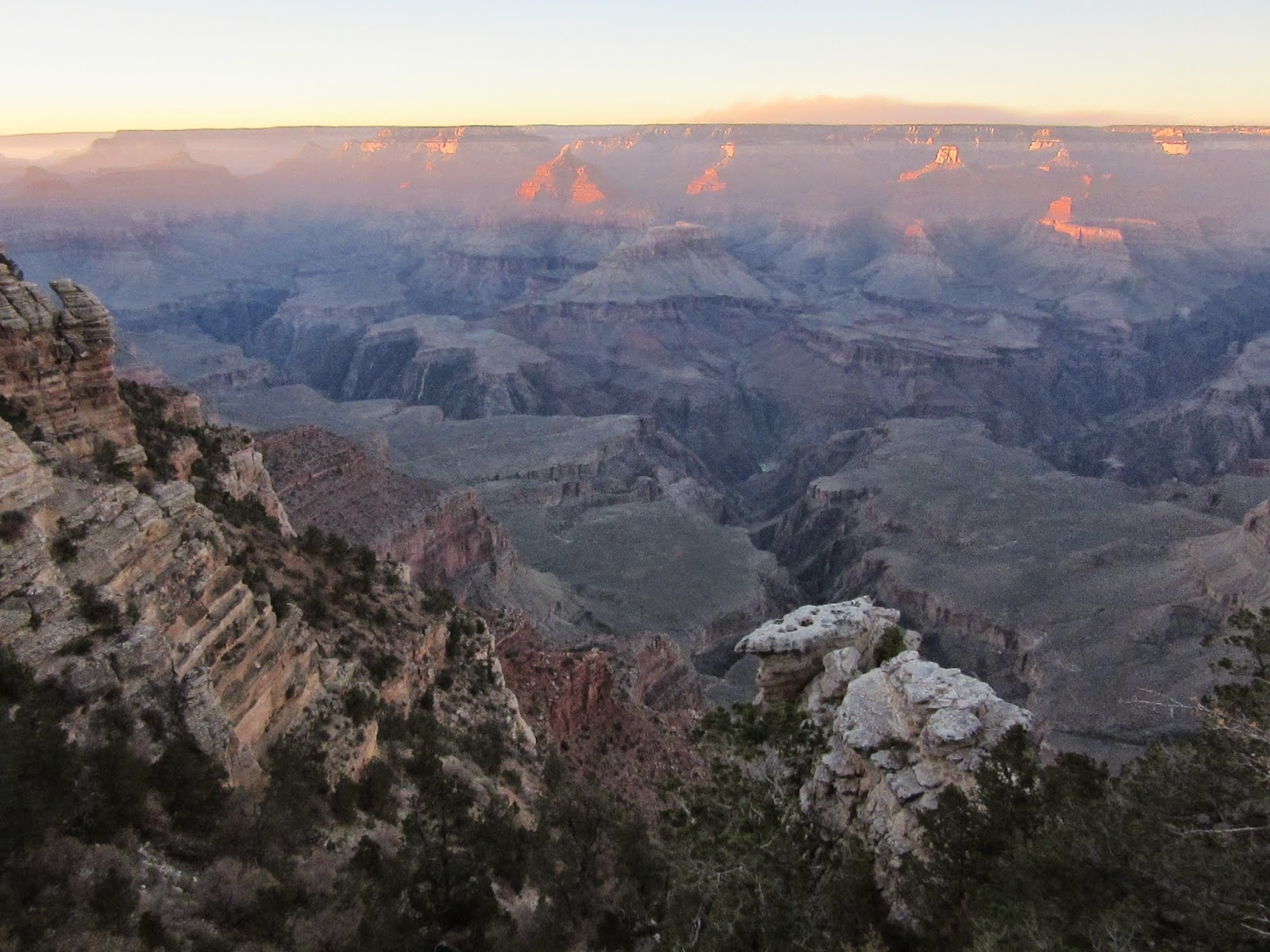 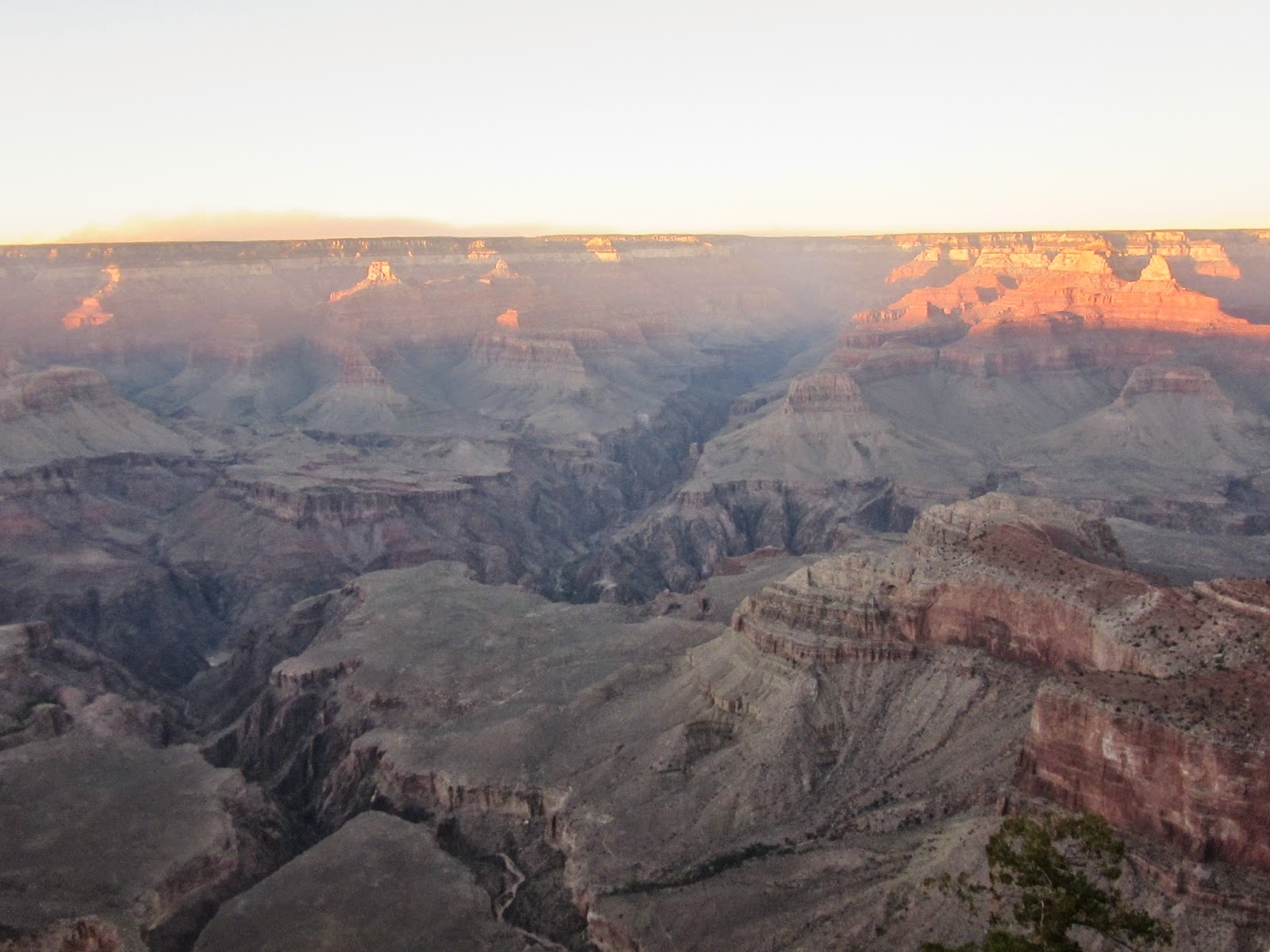 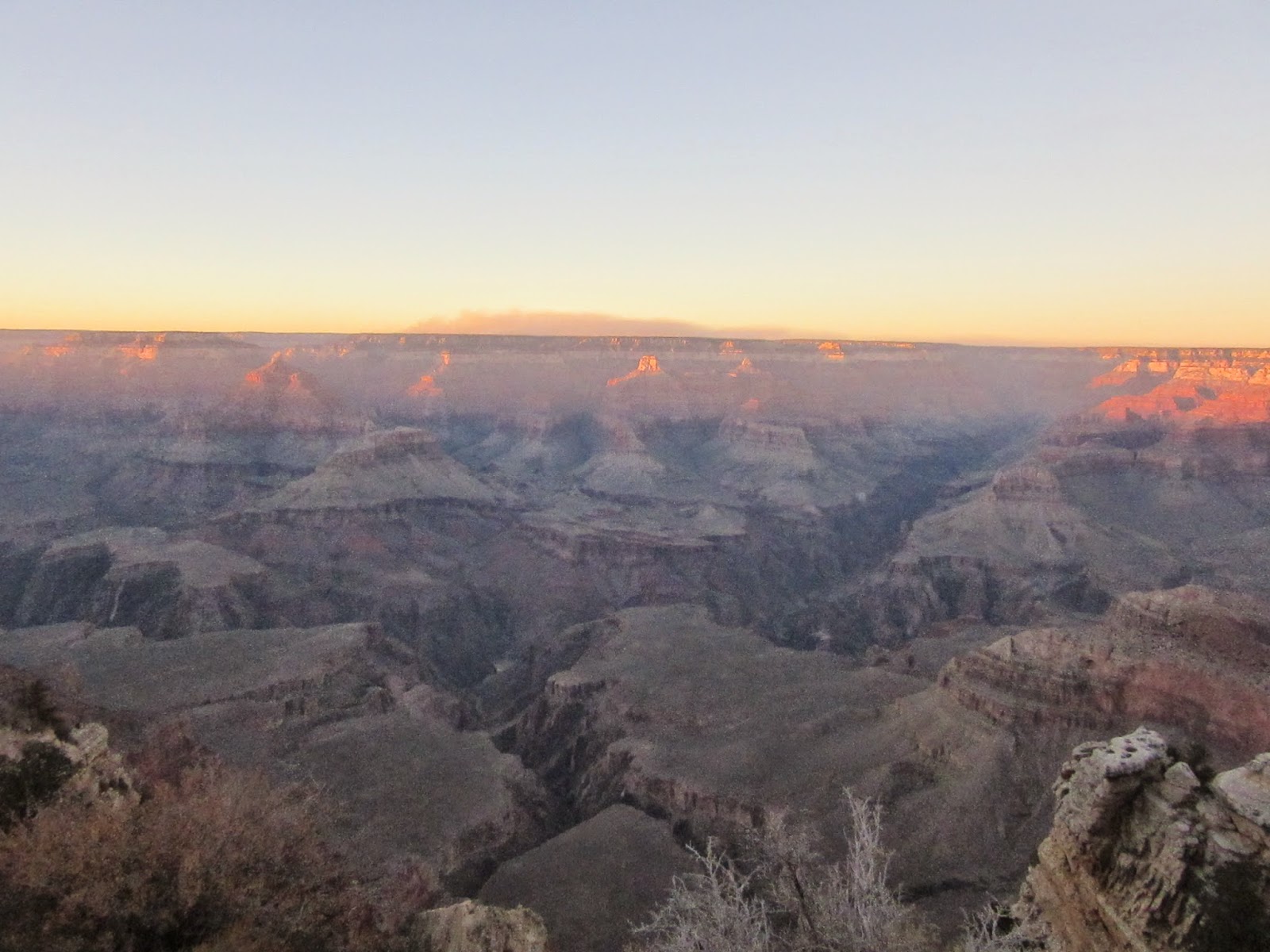 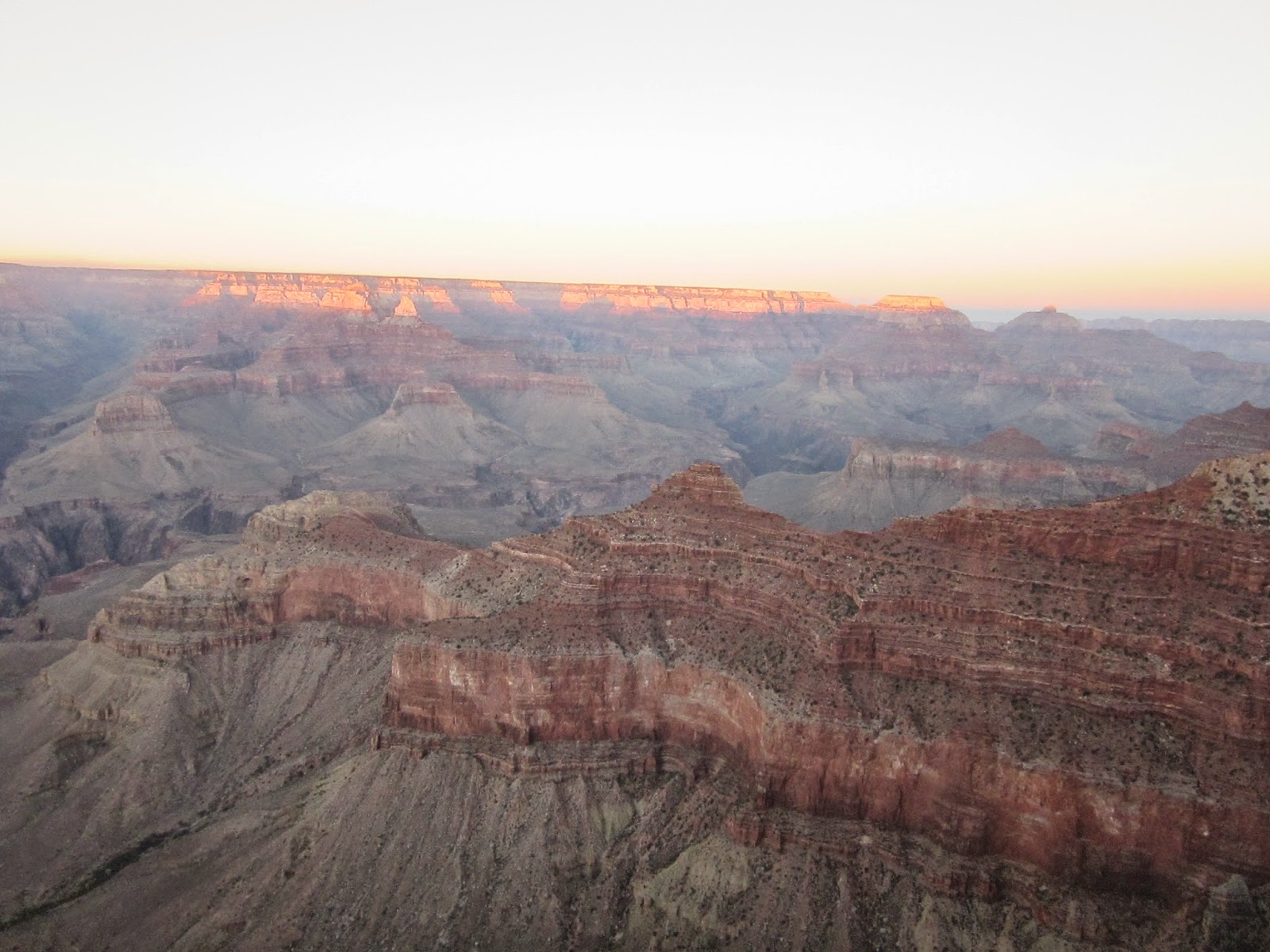 After sunset we cooked some beans and rice for dinner and relaxed around camp, enjoying the fire and the stars.  Matt went to wash the supper dishes and came back with a Walking Stick on his arm to show me.  Neither of us had ever seen one in the wild before.  It was really neat.  What a strange life form!

A mind-boggling tenth day and fantastic introduction to the grandeur of the Grand Canyon.
By BLD in MT