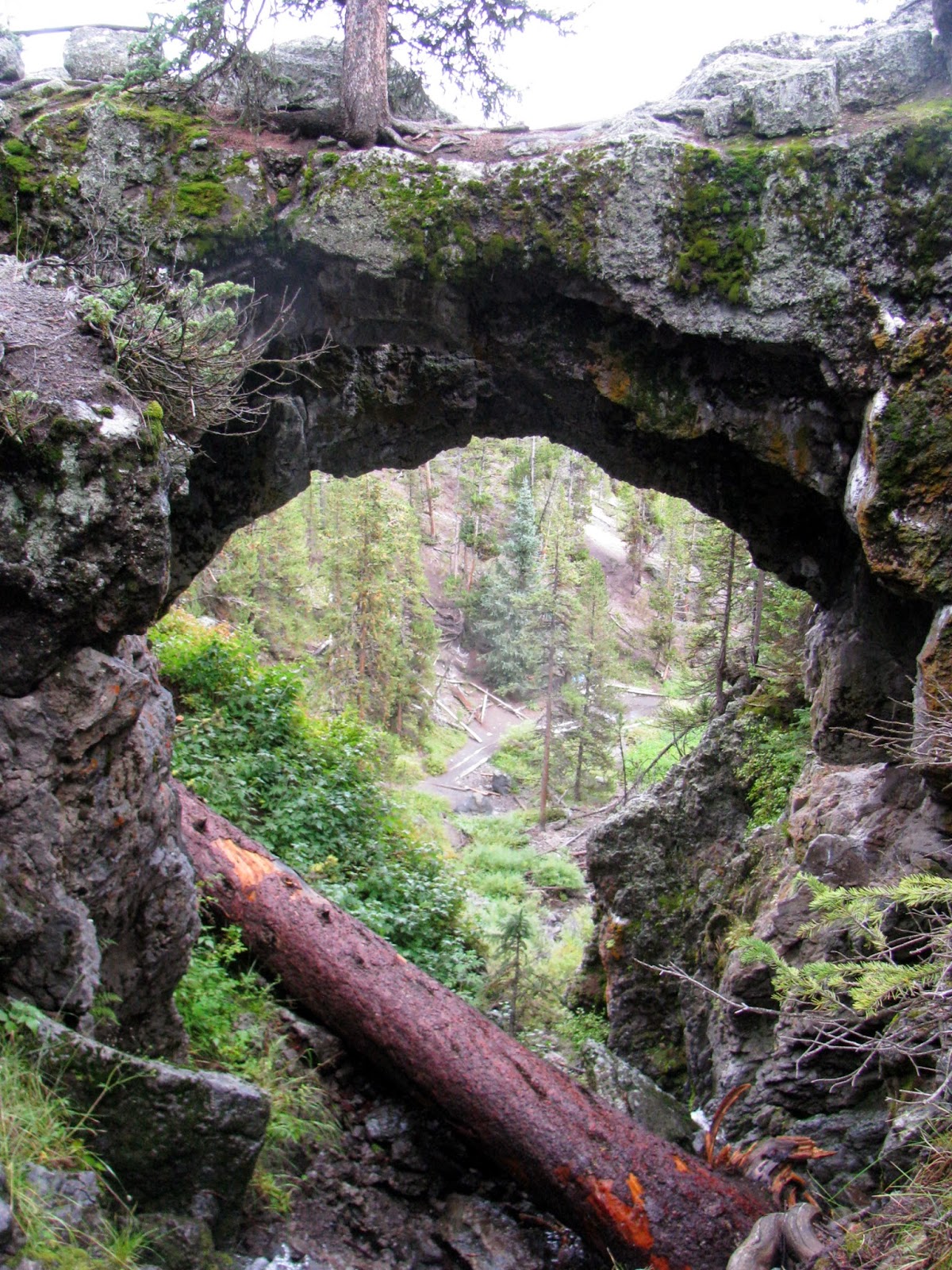 Matt and I had planned to go to Yellowstone last weekend.  Unfortunately, there was some scheduling issues at work and in the end we opted to stay in town, work around the garden, spend time with friends and family, and take in a concert instead.  It was a great weekend.  Sometimes staying at home is exactly where you're supposed to be, I think.  Of course, I almost always think Yellowstone is the place to be, too.  With that I decided to revisit my photos from a fantastic, easy little hike we took last spring which I never wrote up--Natural Bridge.  Its not strenuous with negligible elevation gain and only three miles round trip--perfect for the last day of the weekend when our legs are tried. 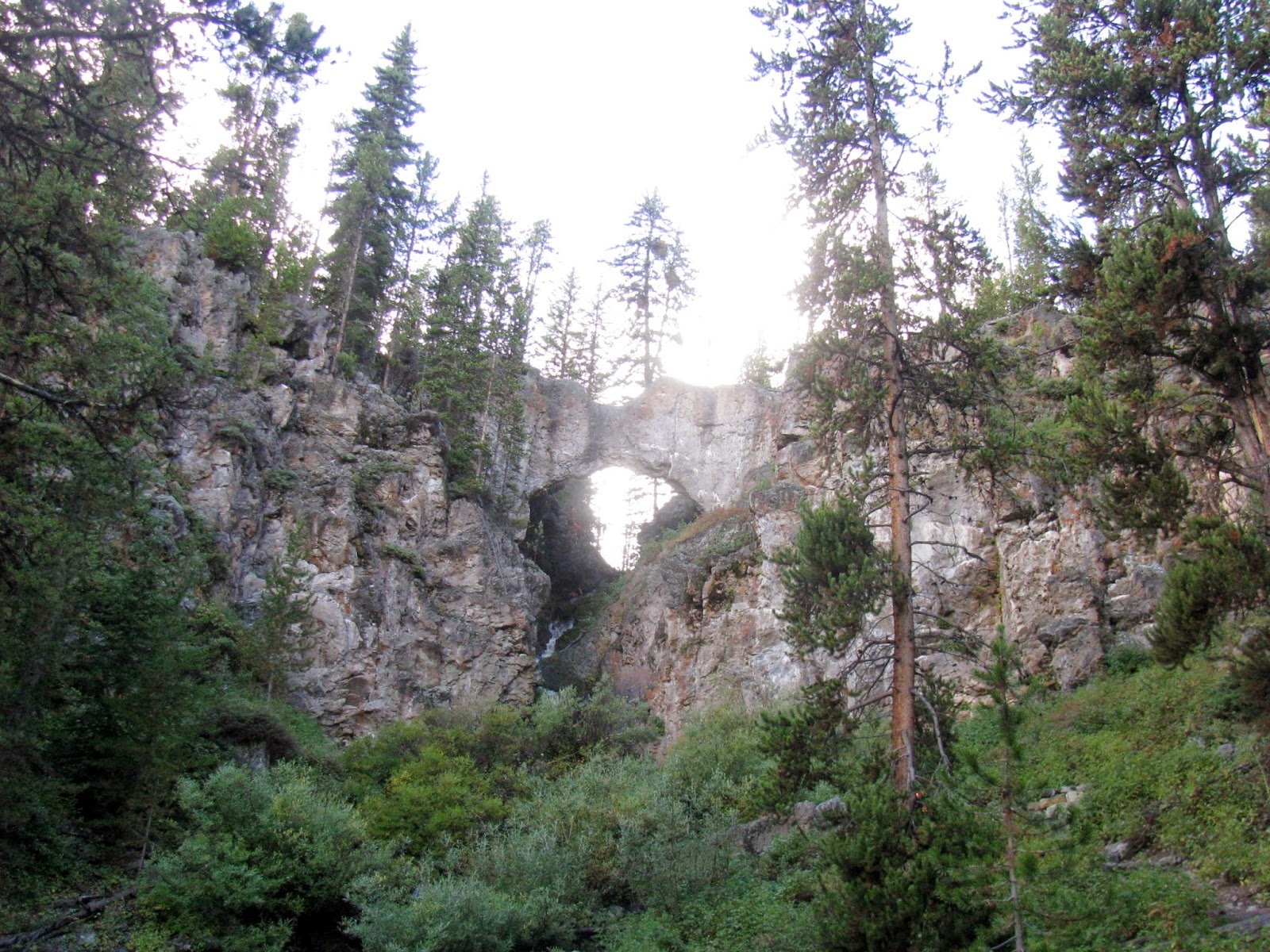 The trailhead for Natural Bridge is across the road from Bridge Bay Marina's extended parking area.   The trail starts out paved and runs parallel to a road leading to the Bridge Bay Campground.  At the camp the trail curves left and leads through a lovely, shady forest.  After about a half mile through the trees the small foot trail meets up with a wider, graveled bike path.  The bike path actually used to be an old stagecoach road from West Thumb to Lake which has since been converted to more pedestrian travel.   Our guidebook says that people could still drive to Natural Bridge until the 1990's.  I am sure glad its a hiking and cycling trail now.  Anyplace people can drive to is always more crowded and littered.  Its amazing how just a short and easy hike can change how many people are willing to go see the sights.  Hit the trails in Yellowstone and you leave the crowd behind, in our experience.  More wildlife, fewer bits of microtrash.
The bike path/trail continues on through the trees, skirting along a pretty meadow until the Natural Bridge comes into sight up ahead, towering over the trail.  A short series of switchbacks later and we were on the level with the Natural Bridge itself.  That was really the only steep part of the hike.  The rest was a real nice stroll through the woods. 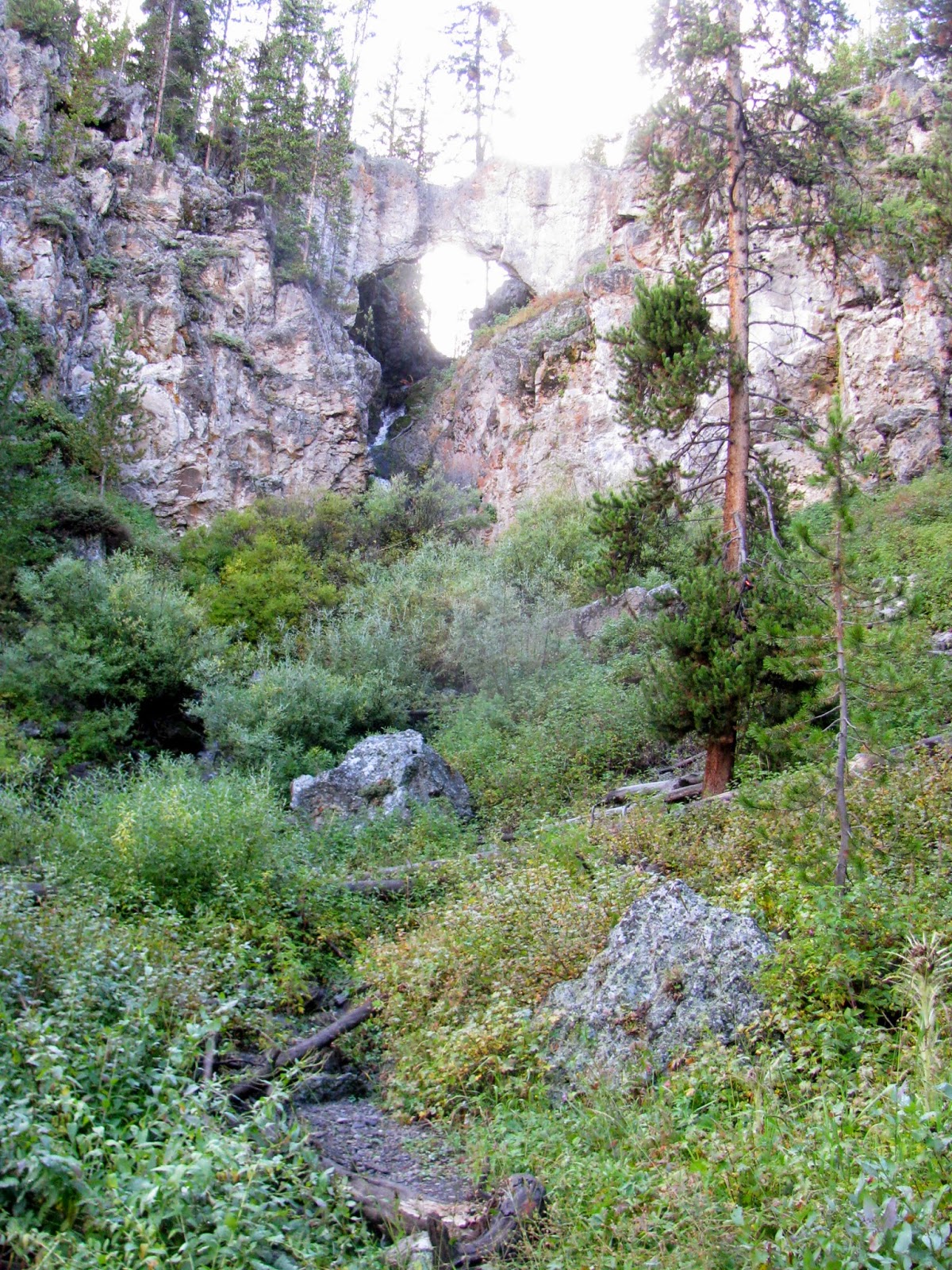 A natural bridge is a neat geologic formation anywhere.  Matt and I used to go hiking near one that was cut by the Boulder River.  The Natural Bridge in Yellowstone is the only such feature in the park though.  It was discovered (by white people) in the Hayden geological expedition of 1871.   This particular natural bridge has a span of 29 feet over Bridge Creek and is 51 feet tall, according to a really neat sign board at the base of the bridge, before the switchback assent.  It had the Yellowstone Natural Bridge scaled with some of the bridges in Arches National Park.  Well, Yellowstone's is tiny by comparison!  Tiny!  It made me want to head to Arches!  We will someday.
Because of concerns over structural integrity--there is a spruce growing smack in the middle of the bridge with resulting crack from root penetration--people are not allowed to actually cross over the Natural Bridge anymore.  There are stairsteps cut into the ravine behind it which allows passage down to and over the stream that carved the bridge in the first place. 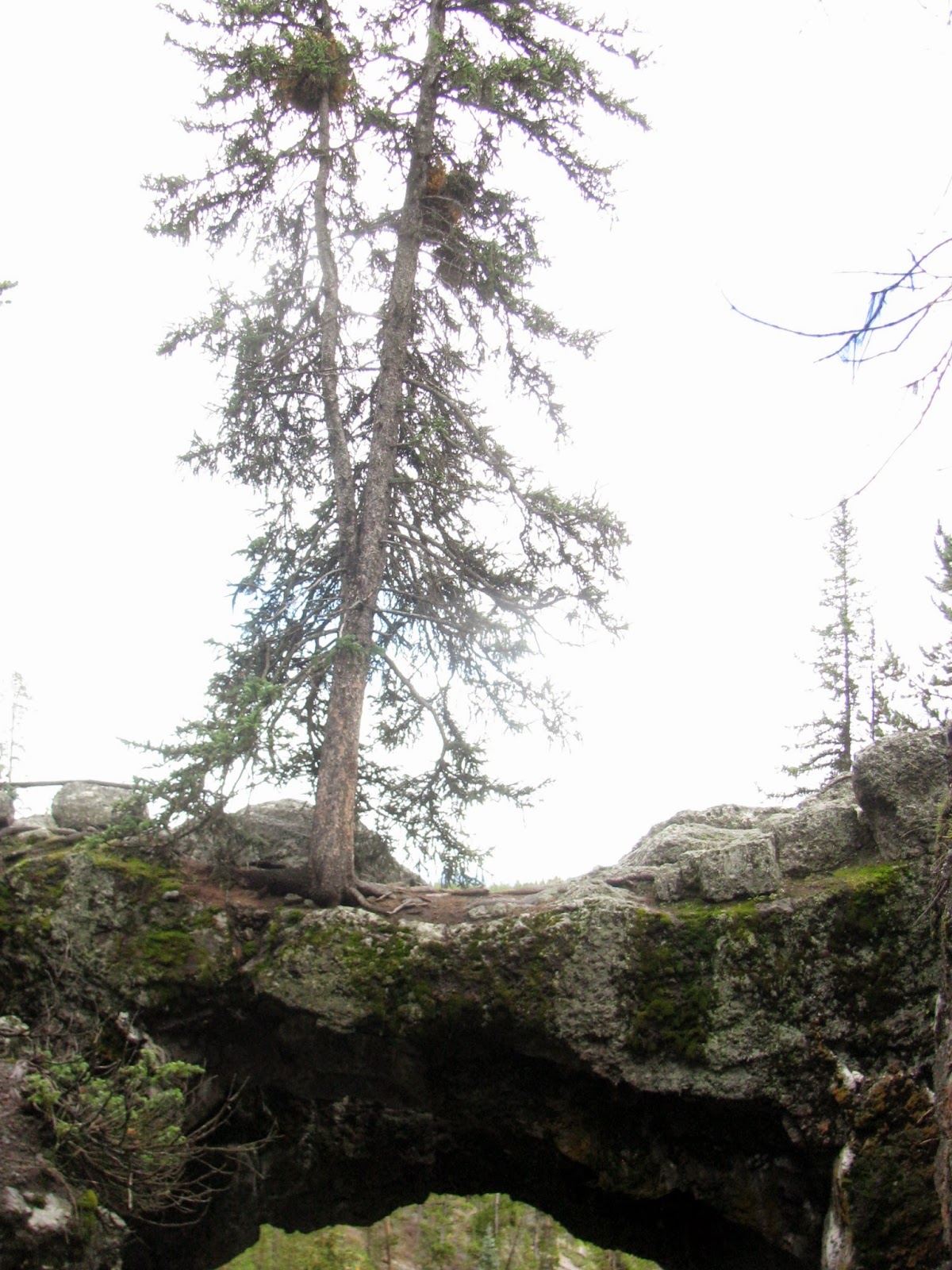 While I am certain it would be neat to cross over the bridge I must say that this route behind it offered a very interesting perspective from the water level--through the hole the water carved to create the arch.  Water is such a magnificent force. 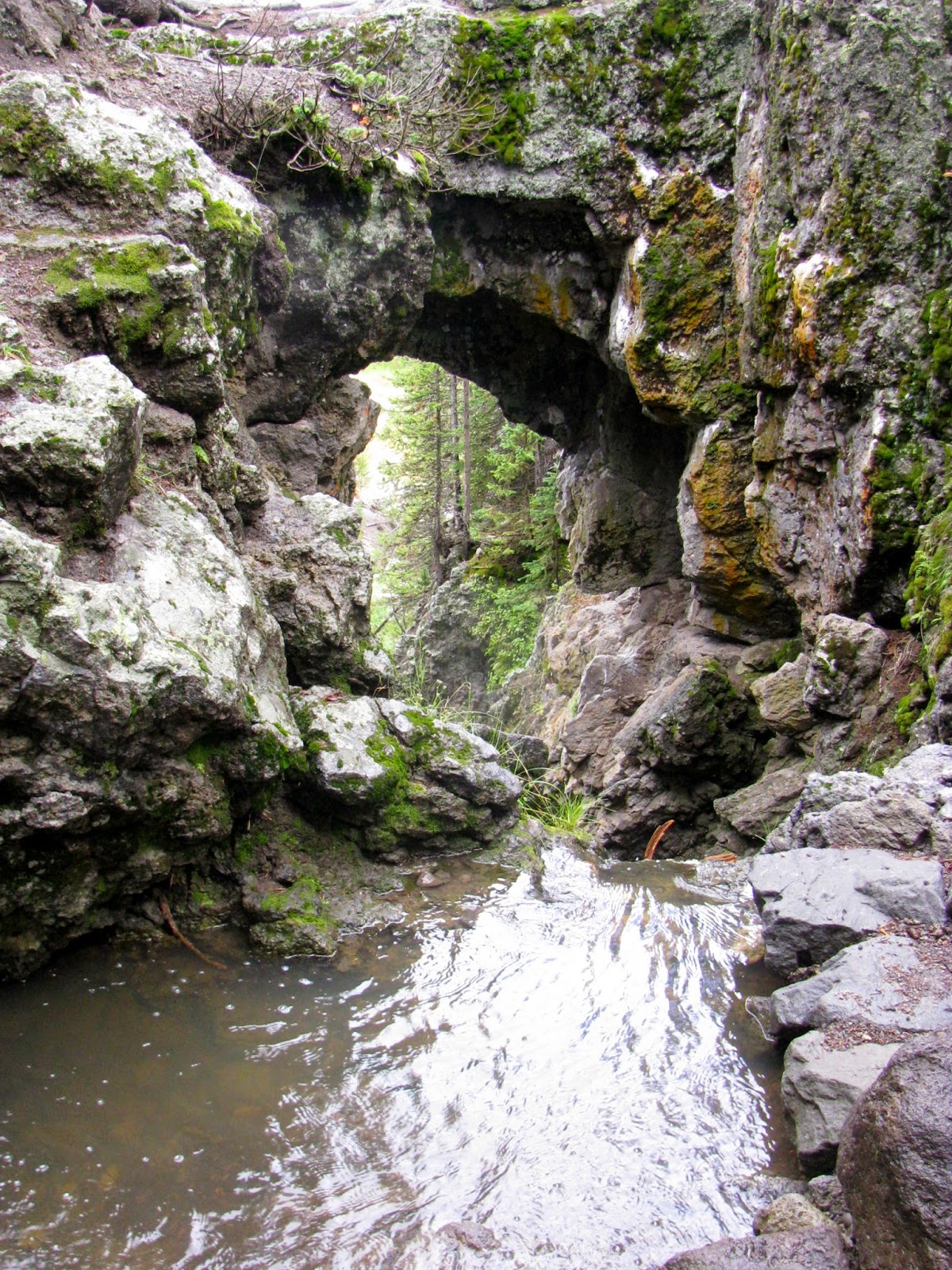 Then it was back down to the main trail, back out to the junction with the foot trail, and back to camp.  We encountered a doe mule deer with her fawn along the bike path portion of the trail.  We gazed into each other's eyes a moment before she turned and led her youngster deeper into the trees.  I never cease to be impressed by how quietly and quickly the woodland creatures can vanish from sight. 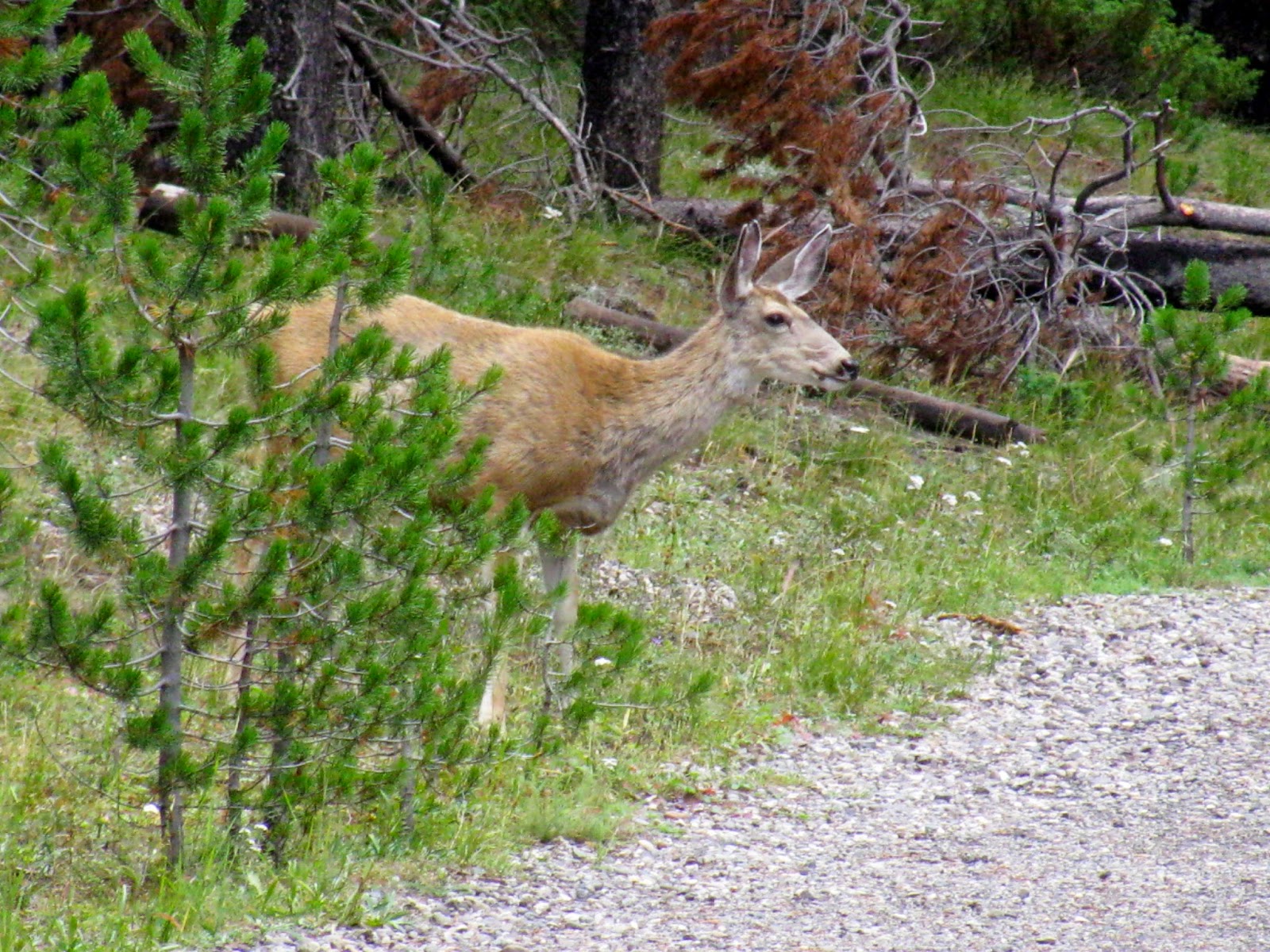 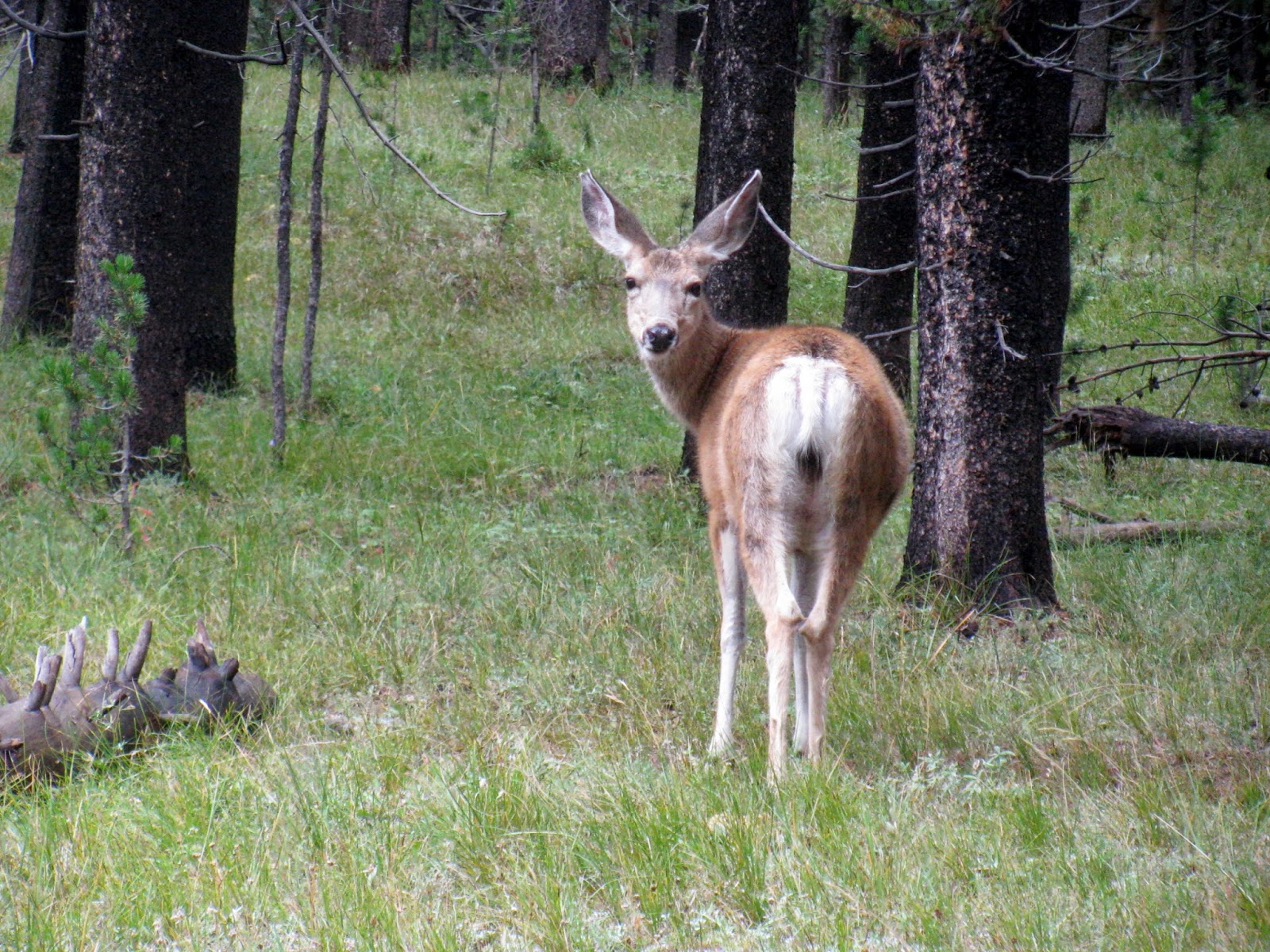 It was a lovely hike.  Easy and beautiful--and we saw two other people the whole time.  I hope we can get back out pounding the park trails again soon. 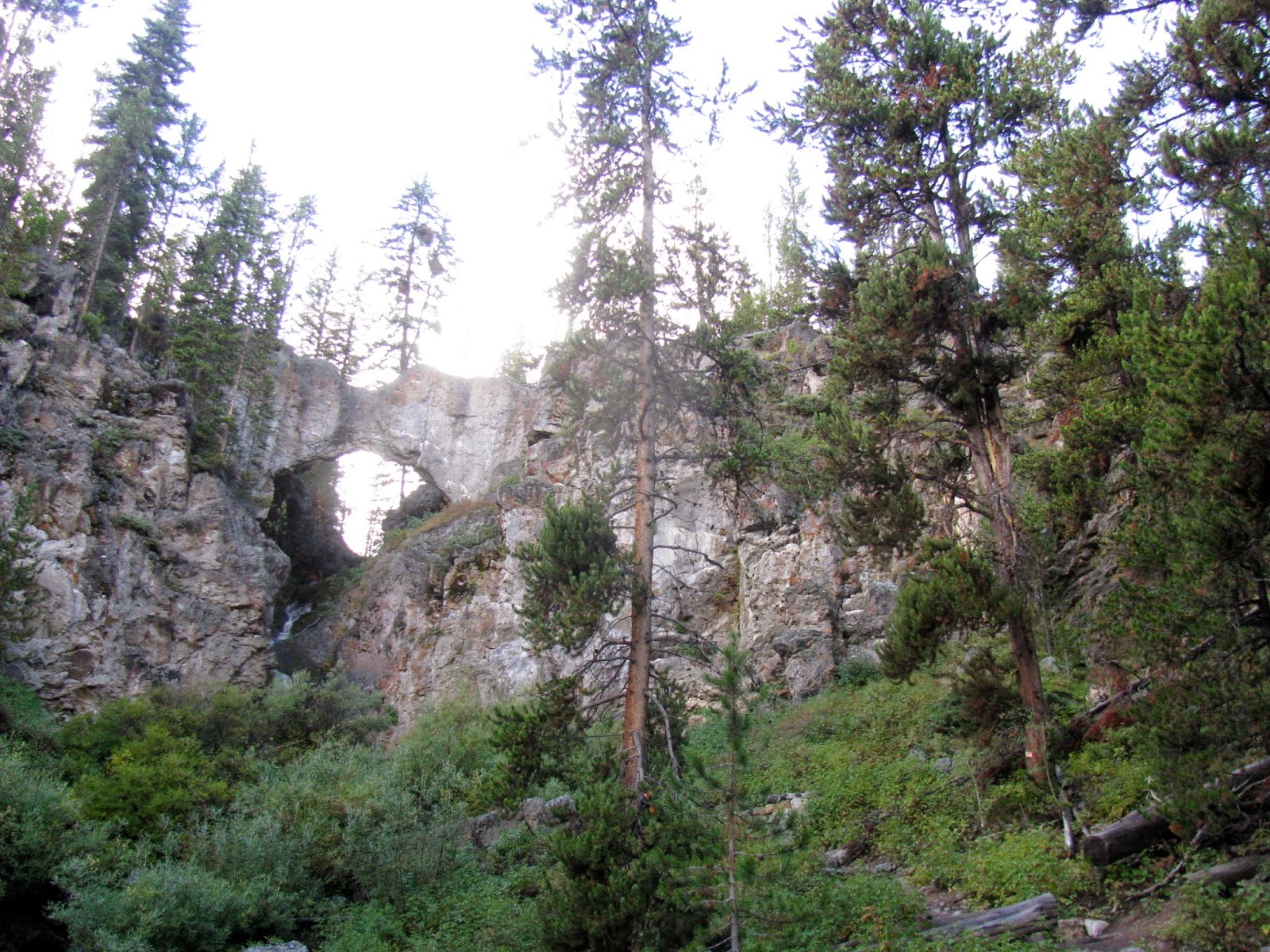