A Renaissance Tunic and Vest for my Peasant Boy 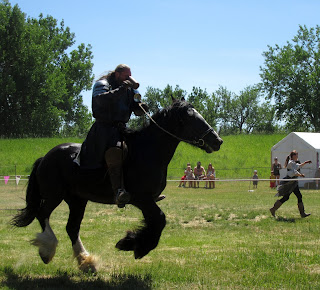 As I've mentioned in the past, we sell tie-dye at a renaissance fair every June.  Its a absurdly fun time.  I love the adults playing dress up.  I love the handmade touches that hearken back to a simpler time.  Its just a total blast.  Before we started selling tie-dye neither Matt nor I had ever attended anything quite like this before.  We had no idea what we were getting ourselves into.
So, with each year that passes we learn something or add something to our own participation in the quaint, whimsical atmosphere of the fair.  This year, for example, we brought dollar gold coins to give back to people as change when they bought something from us.  We called it The King's Gold. 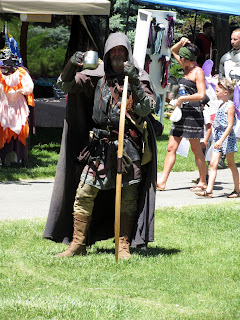 I also made Matt a simple tunic (which he tie-dyed) and a rustic vest from some scraps of wool and felt I had in my stash.  For having no pattern and totally winging it, I was pretty pleased with how both turned out.  Matt looked much more authentically peasant boy this year than in the past.  Huzzah.  I recycled parts of my Laura Ingalls Wilder costume into a simple peasant girl get up.  Kenneth the Humble kept hounding me to get out and milk those cows!  But, I was too busy watching Matt throw axes and chasing fairies for that sort of labor. 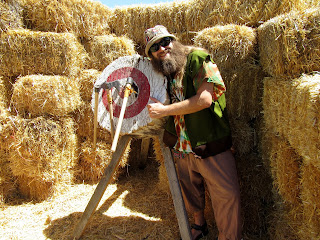 There was, as usual, an incredible cast of medieval type characters including sword swallowers, acrobats, jesters, wandering minstrels, jugglers, knights, Lords, weavers, and fairies.  The village blacksmith didn't make it though as he was injured while trying to shoe a dragon--or a so a sign in The Shire informed me.  Seriously.  An absurdly fun time.