Matt and I have seen many, many an American Coot in our birdwatching adventures.  Sometimes there are hundreds of them it seems--certainly more than I've ever been able to count--floating along the surface of a body of water and diving underneath for a bite to eat.  They are small and sleek little grey-black waterbirds with contrasting white bills and a red spot on their face right above the bill.

But, for all the coots we'd seen we'd never seen them outside of the water until recently.  And consequently we had no way of knowing just what sort of incredible and odd feet they had hidden under that water!! 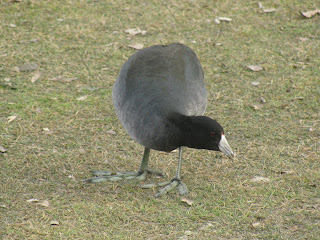 At Riverfront Park the shore of the first big pond is usually covered with rather tame domestic waterfowl.  I say "rather tame" because people like to go there to feed the ducks bread and so the ducks will walk right up to you.  We never bring any handouts for them and they always seem disappointed...but I may be reading too much into it.  So often times when we go to the park for birdwatching we don't even stop at this first pond because its not the sort of birdwatching that we're into.  But, for some reason on this occasion I suggested we start there and walk through the trees all around the ponds.

Mixed with the ducks and Canada geese were a good number of coots--on land.  That was a first.  This was new and exciting for us.  So we stopped and watched them a good long time (and were approached by the mallards who eventually drifted away again when they realize they've struck out on bread). 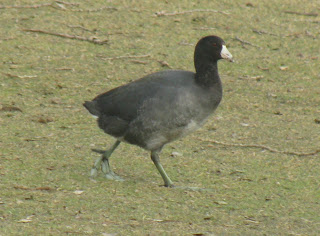 The coots have very interesting feet.  First off, they are huge in comparison with the rest of their body.  Their feet are bigger than their heads.  And they are blue-green-grey in color.  That was super interesting, I thought.  What an odd color for feet!  (I later learned from my bird guide that the juveniles have these strange colored feet whilst the adults are orange colored). 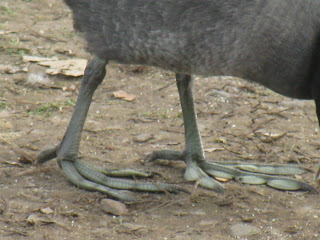 Even more interesting than the color though was that they have wide pads along the lengths of the toes that I assume help with swimming.  They're lobed toes.  They're not webbed like ducks' feet and they walk instead of waddle.   They may look sort of like ducks in the water, but out of it you can easily tell these are not ducks.  I've read they are actually more closely related to the sandhill crane than to mallards. 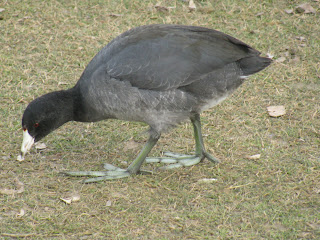 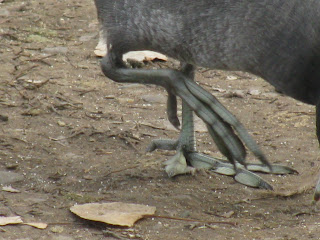 Matt thought their feet looked more like a gecko's than a bird's.  I thought dinosaur, myself. 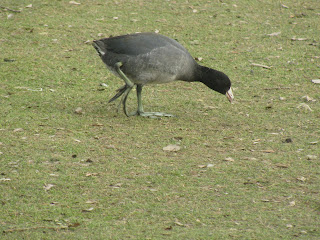 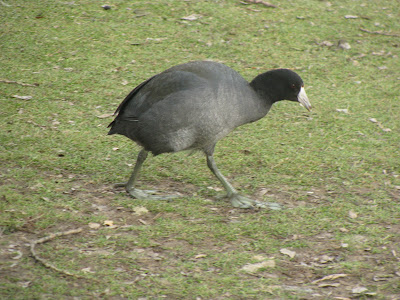 I never cease to be amazed by the sights and sounds and wonders of this world. Even something I've seen countless times can be like the first time all over again.
By BLD in MT