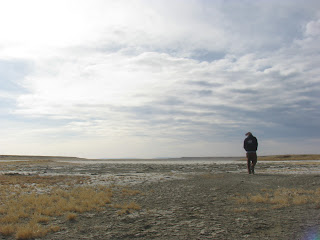 Matt and I both worked late yesterday which meant we had the morning to go on a little adventure.


It was so sunny and warm, hardly seemed like a March day, really.  We decided to take a nice scenic drive out towards Molt, MT and the Big Lake National Wildlife Refuge Complex.  We'd only been to the reserve once before. 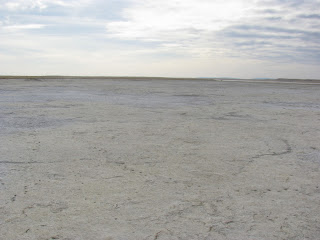 The Big Lake drainage is valuable habitat for waterfowl.  There aren't too many lakes out here in south central Montana so I guess it is a pretty big deal.  The lake's size varies greatly with the seasonal melts and rains and dry periods.  Sometimes it is big.  Sometimes not so much. 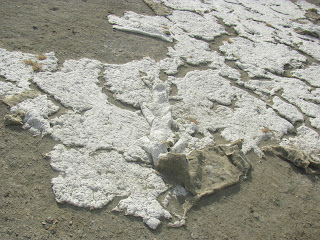 It is like a landscape from another world though when the water is not at its peak.  Like walking on the moon or maybe Mars.  The sky and land are flat and open.  The ground looks covered with snow from a distance as it is so white.  It is white because the ground is covered--and I mean covered--with this strange mat of algae.  Or dried up slime.  Or something....to be honest I am not sure what it is.  It feels like fabric.  Like carpet.  It pulls away from the ground in sheets that are surprisingly solid and durable.  (For the record we didn't pull one up, we just found one that had been already.)  The bottom was green.  And the carpet of it goes on and on and on. 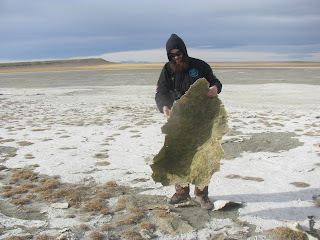 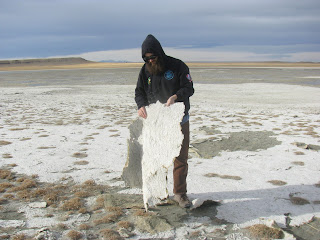 We had to walk across quite a bit of this white mossy plain before we got to where the lake's meandering shoreline was.  Even still (and even with binoculars) most of the birds were too far out for us to ID.  There were hundreds and hundreds of coots and Canada geese though.  That was quite apparent.  The ground was soft and spongy, but not muddy.  It felt quite strange underfoot.  Like walking on...playdough... sort of.    Our tracks were quite evident in the soft earth, as were those of many other critters--though not too many of them human. 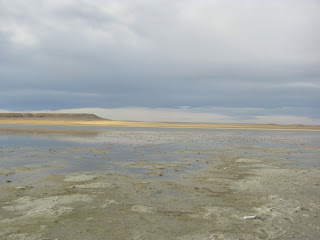 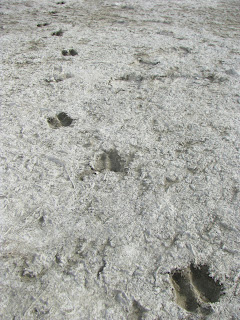 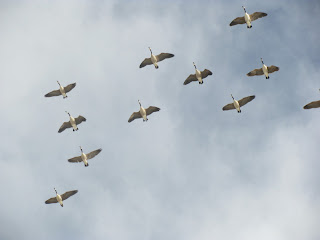 We watched a bald eagle soaring overhead with nary a wing flap--just riding the currents.  I don't know that this sight will ever cease to amaze and bewilder me.  It always seems like such a gift to behold their majesty and power.  This eagle even circled low and close over us providing us a wonderful view.  Usually they always just circle higher and away from us it seems--almost never closer. 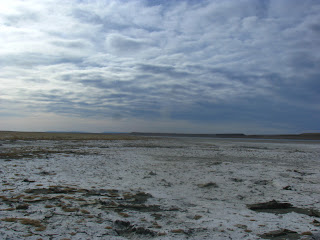 We also saw immense numbers of horned larks on the drive to and from the reserve.  They were all over the place!  I think their little horned tufts and black eye masks are awfully charming.  They have a lovely singing voice, too.  Almost as nice as that of the western meadowlark, our state bird.


A storm looked to be rolling in from the distant mountains and the morning was fast becoming afternoon so we had to head back to town.  But, we decided that we're going to try to visit Big Lake more regularly--watch the full range of the seasons and migrations and to enjoy a peaceful stroll is a place of such quiet, remote and strange beauty. 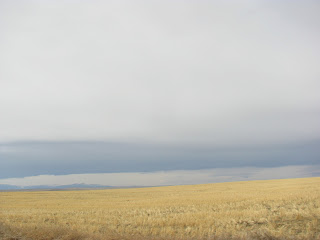