My Birthday in the Woods 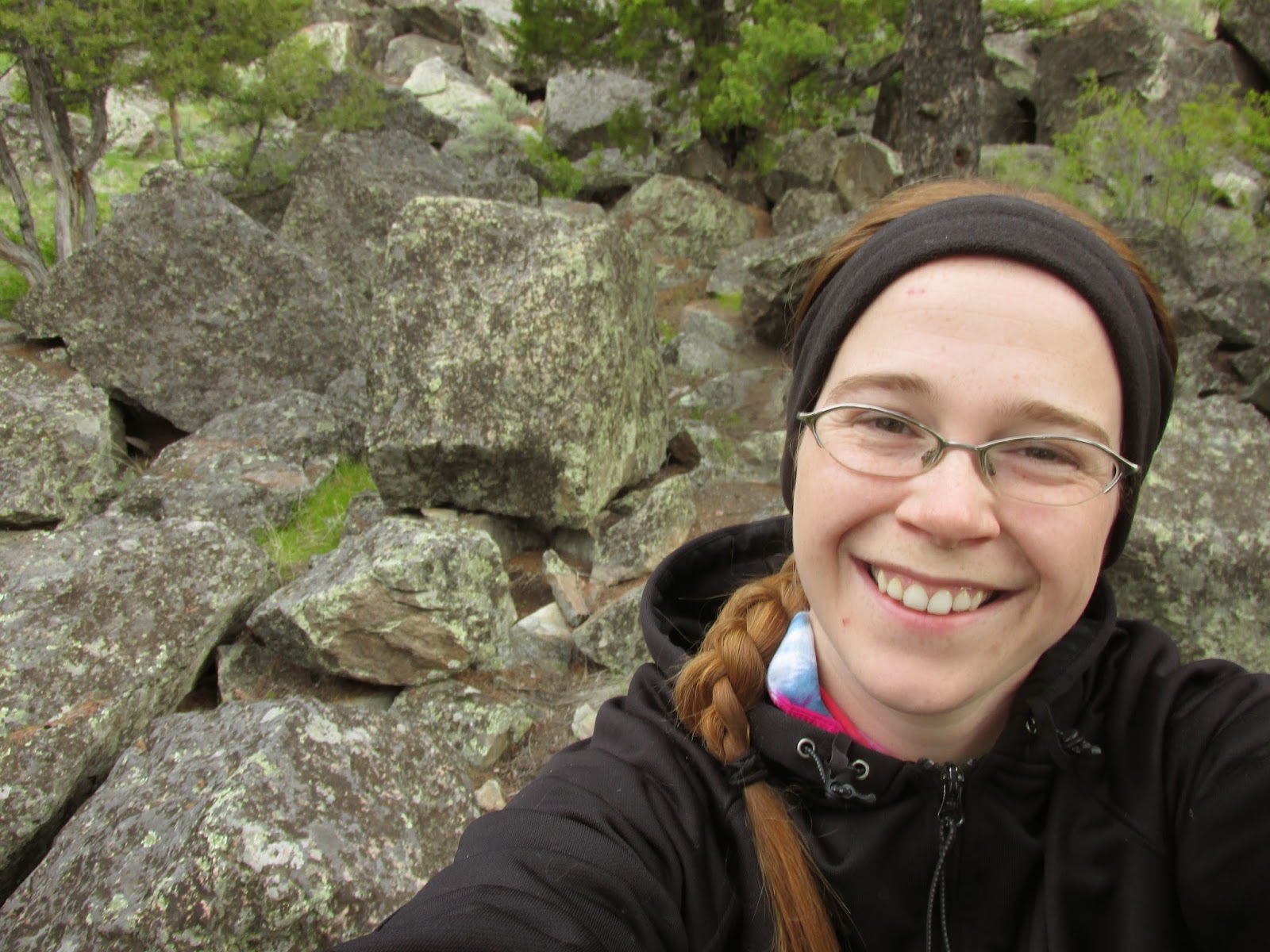 We camped in a tumble of boulders just outside of Yellowstone on Thursday night at a sweet little forest service campground called Canyon.  We've used this place as our starting point for YNP trips many times.  Its only a dozen miles or so from the park and, until this year, offered free camping.  Now it cost $7 per night.  Its still a bargain.  It is primitive, as in no drinking water, electricity, or flush toilets provided, but that is just fine by us.  We usually have the place nearly to ourselves.  I woke up on Friday, my birthday, to a bright, but cloudy day.  Matt had a fire and hot cup of tea ready for me the moment I peeked out of the tent.  I played guitar and climbed around on the boulders while he cooked breakfast.  One of my birthday plans was to eat a cupcake with every meal--starting with breakfast--one for each decade of my life. 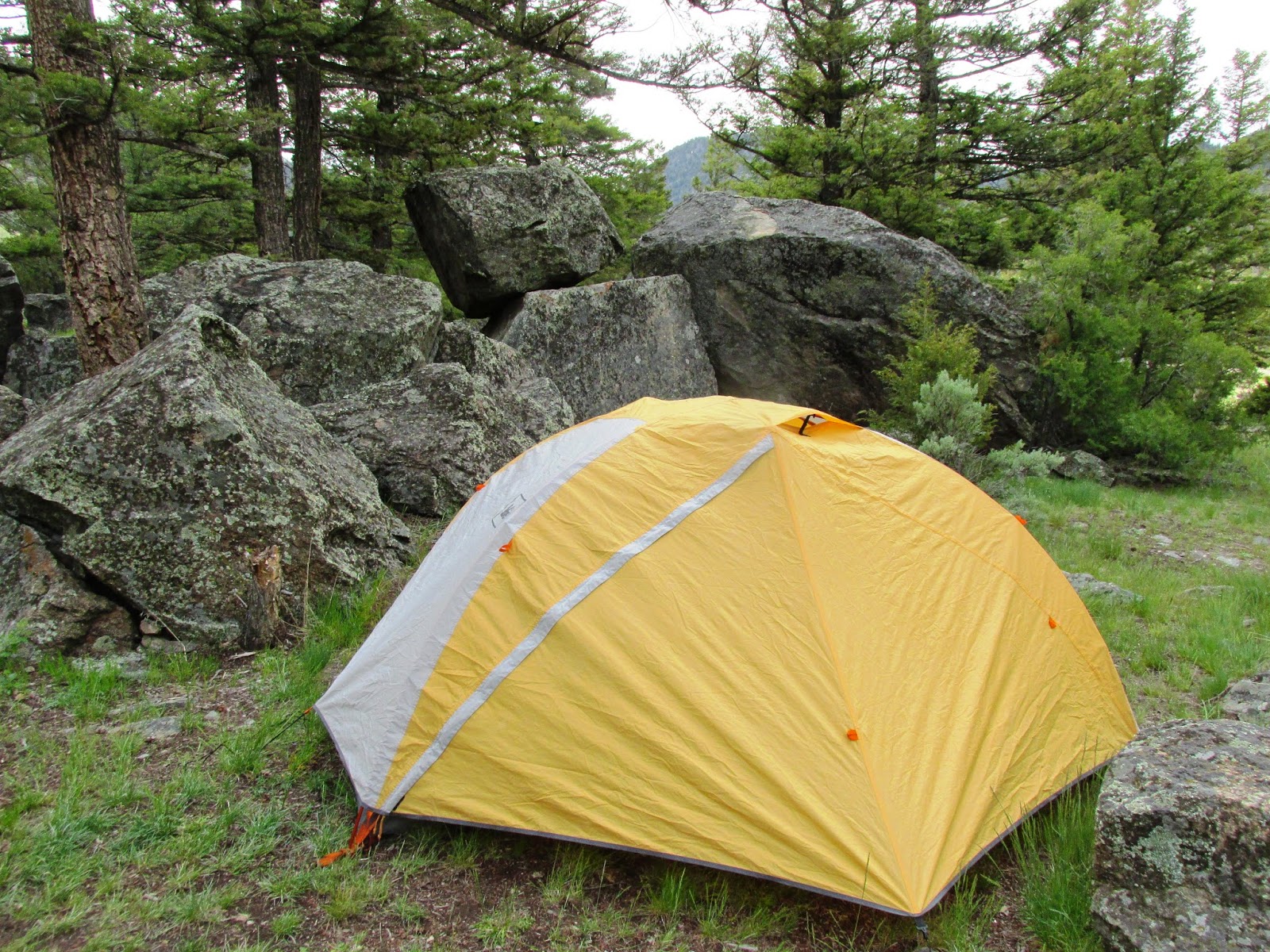 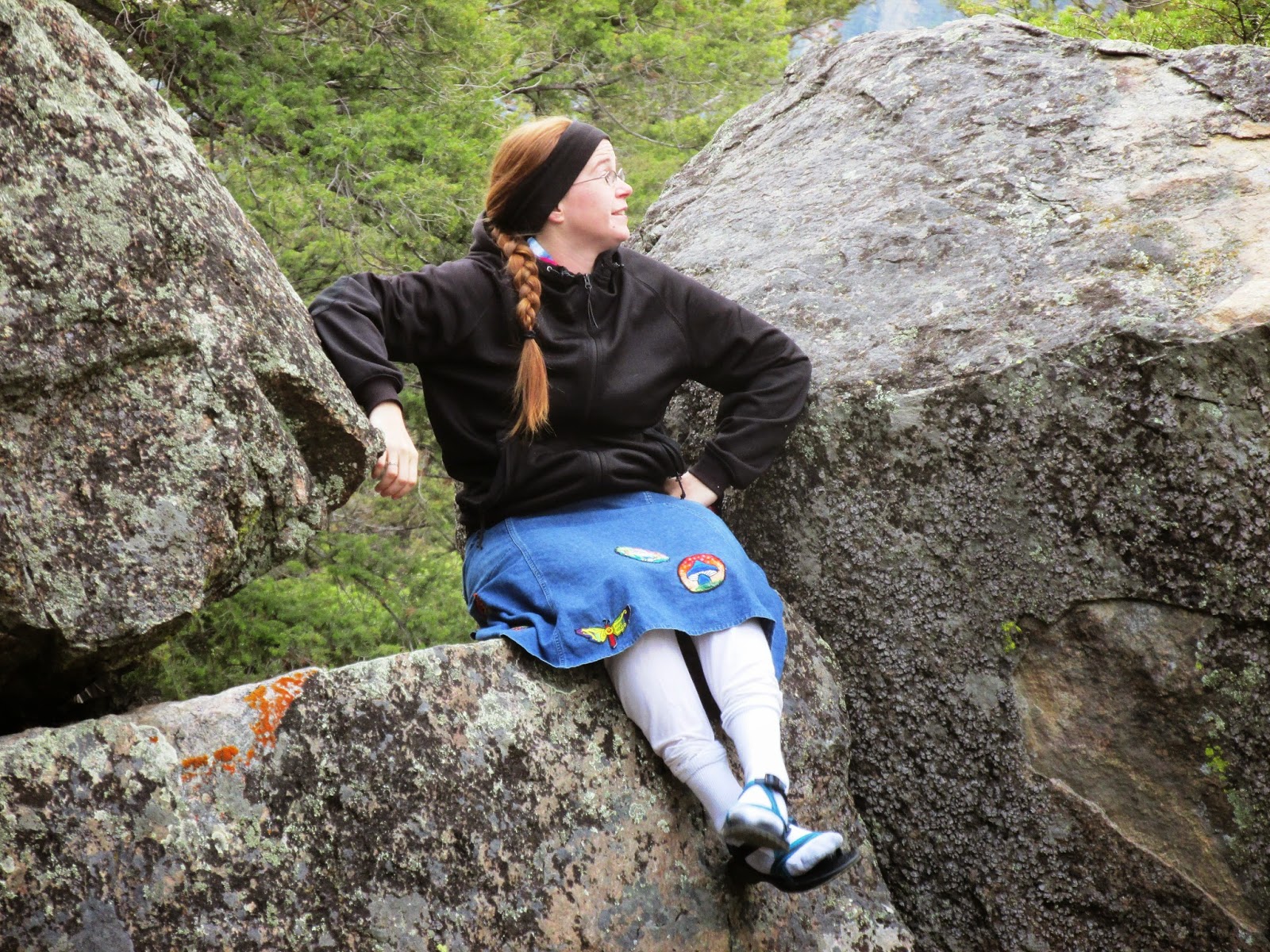 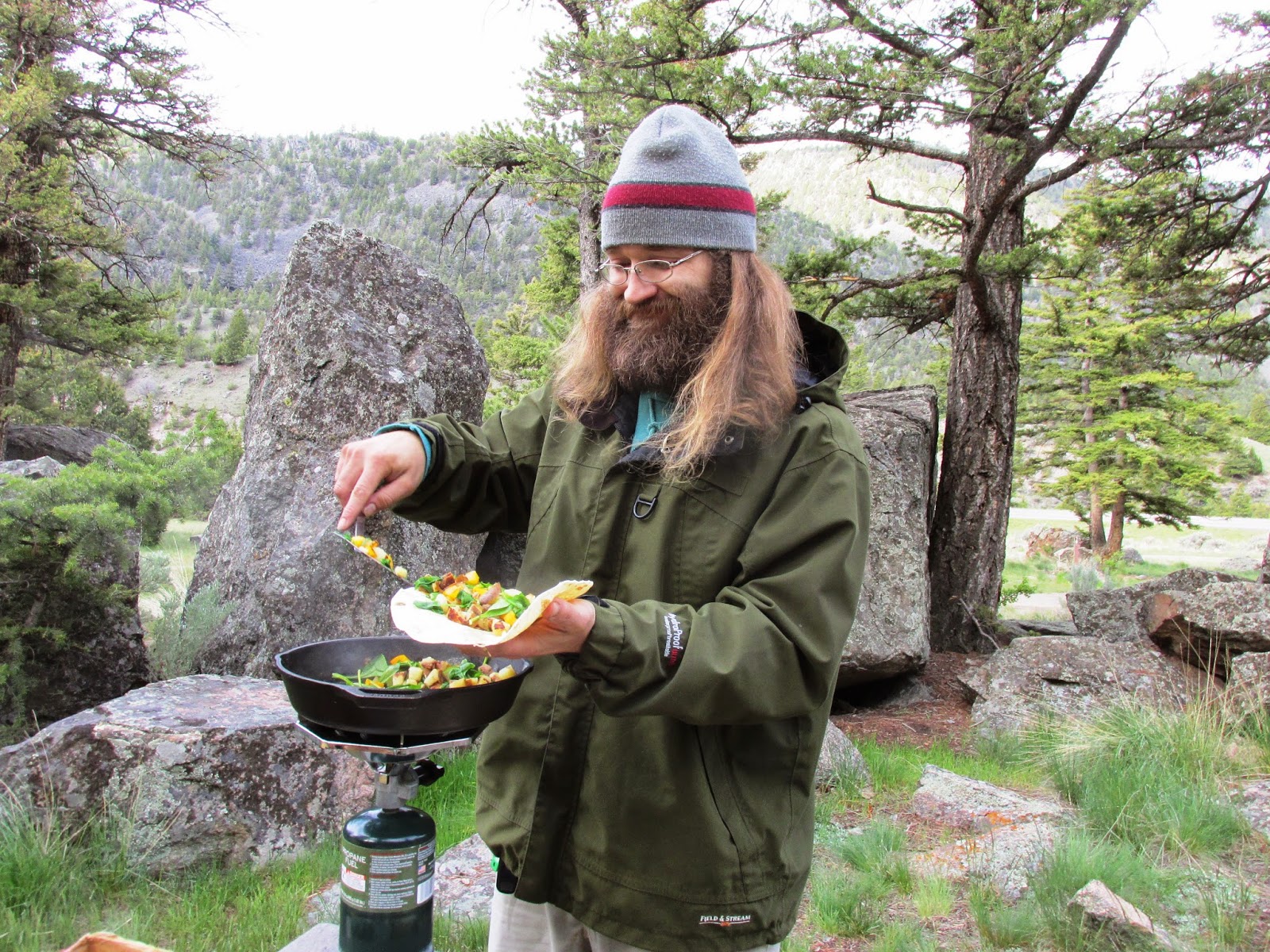 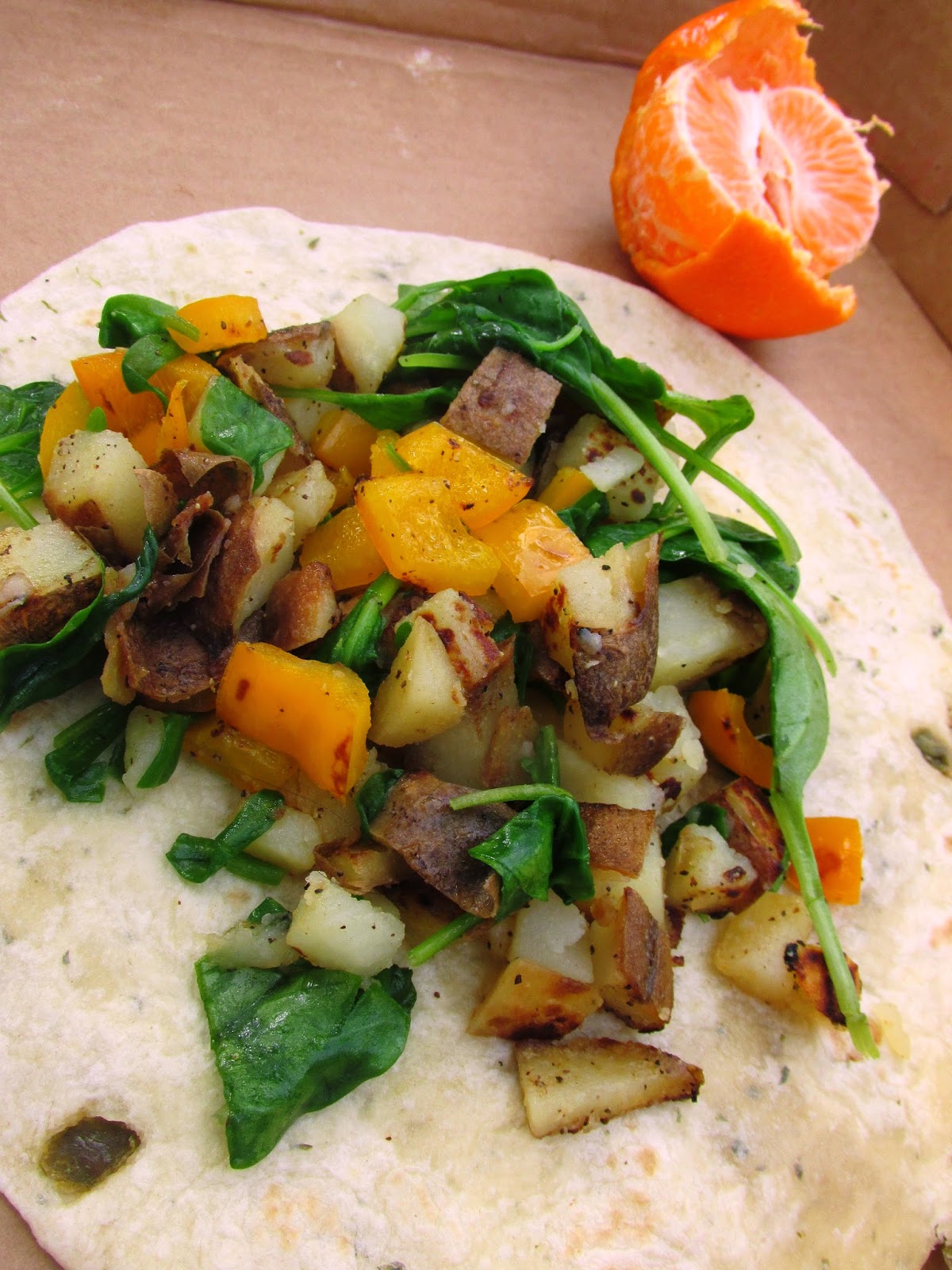 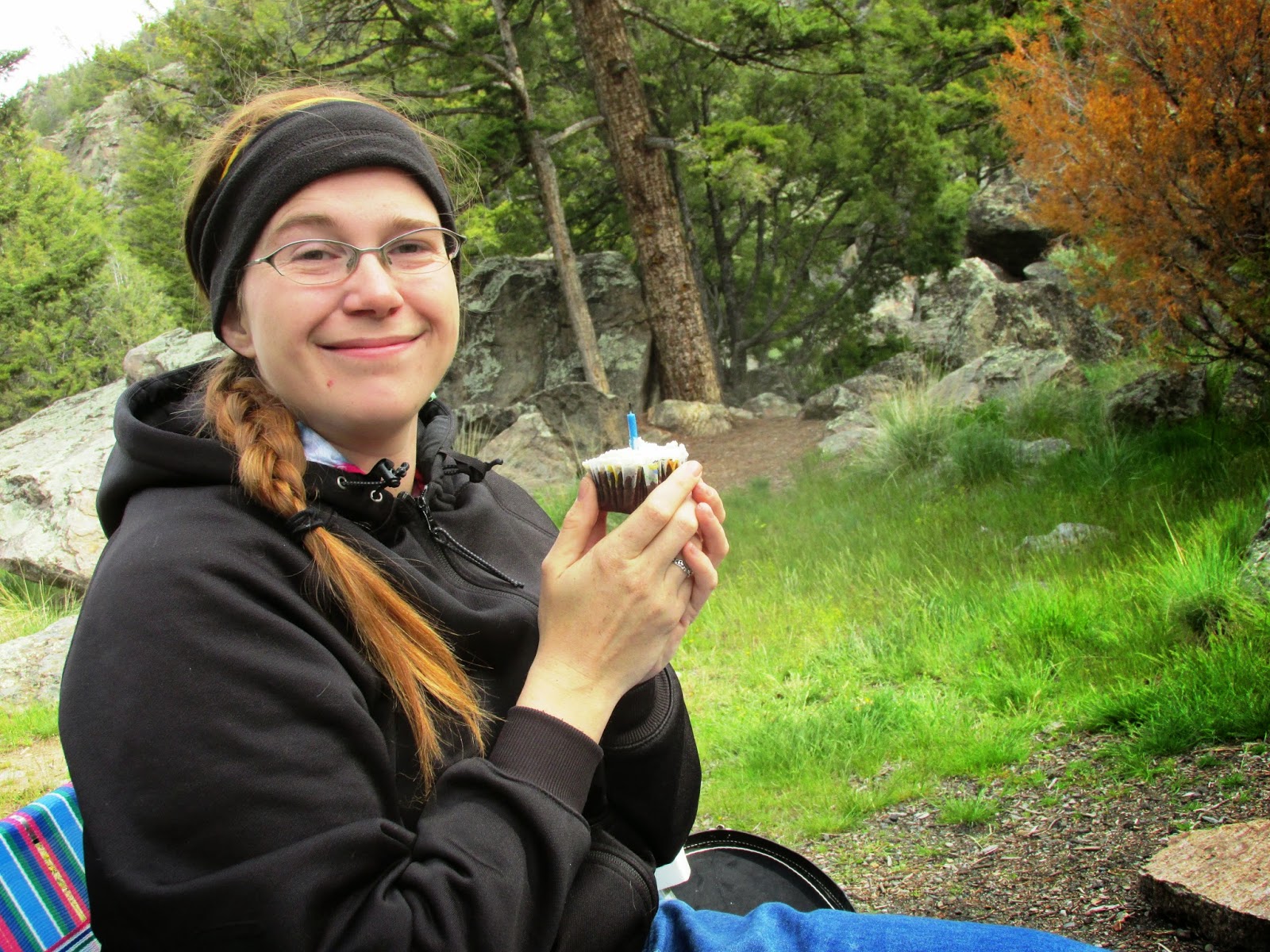 We packed up camp and moseyed into the park.  First up was a hike to Hellroaring Creek.  The clouds started to break up allowing for some nice sunshine on our hike.  The spring flowers were lovely, especially the pasque flowers which I find so delicate and beautiful looking.  Along the way we crossed a suspension bridge over the Yellowstone River.  This suspension bridge was significantly more sturdy that the one we hiked across near the Kootenai Falls.  The one in Yellowstone is wider and shorter which adds to the greater stability, but we could still make it sway and bounce quite a bit.  We saw all sort of wildlife.  There were a good showing of birds, a small herd of bison, a pair of sparring pronghorn antelope, and hardly any other people.  I think we met only three other hikers--a group of young men from Chicago on a graduation trip. 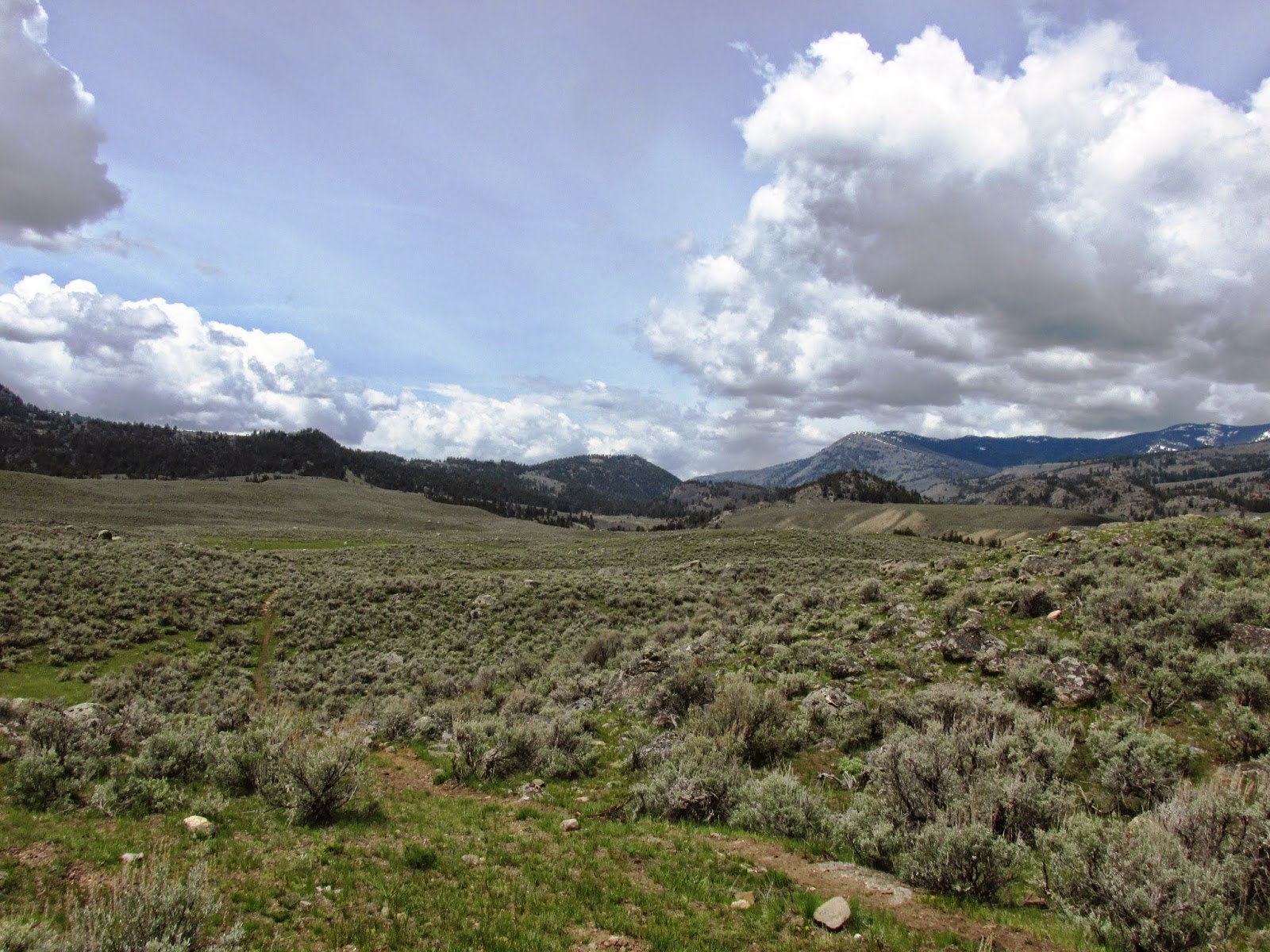 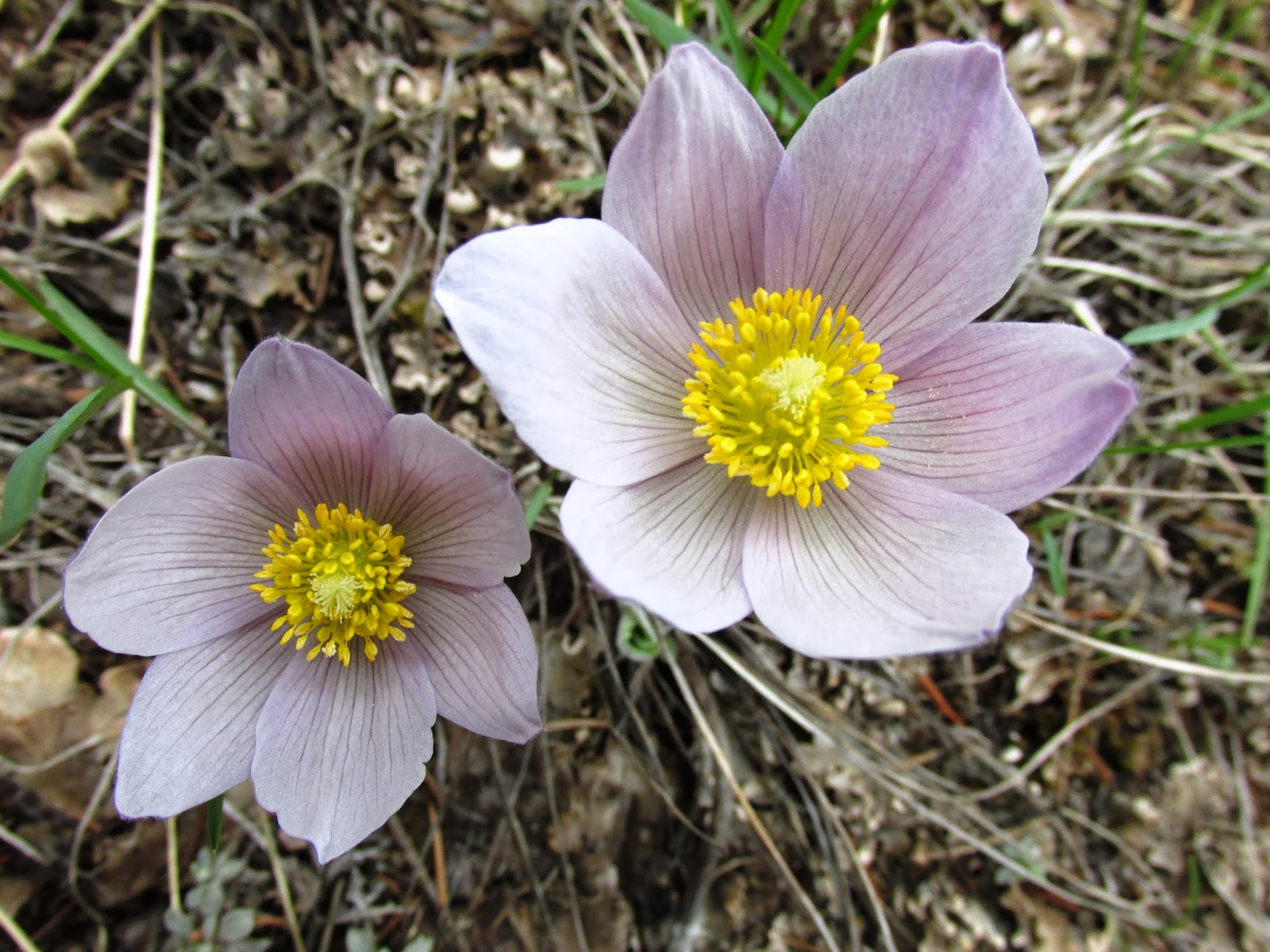 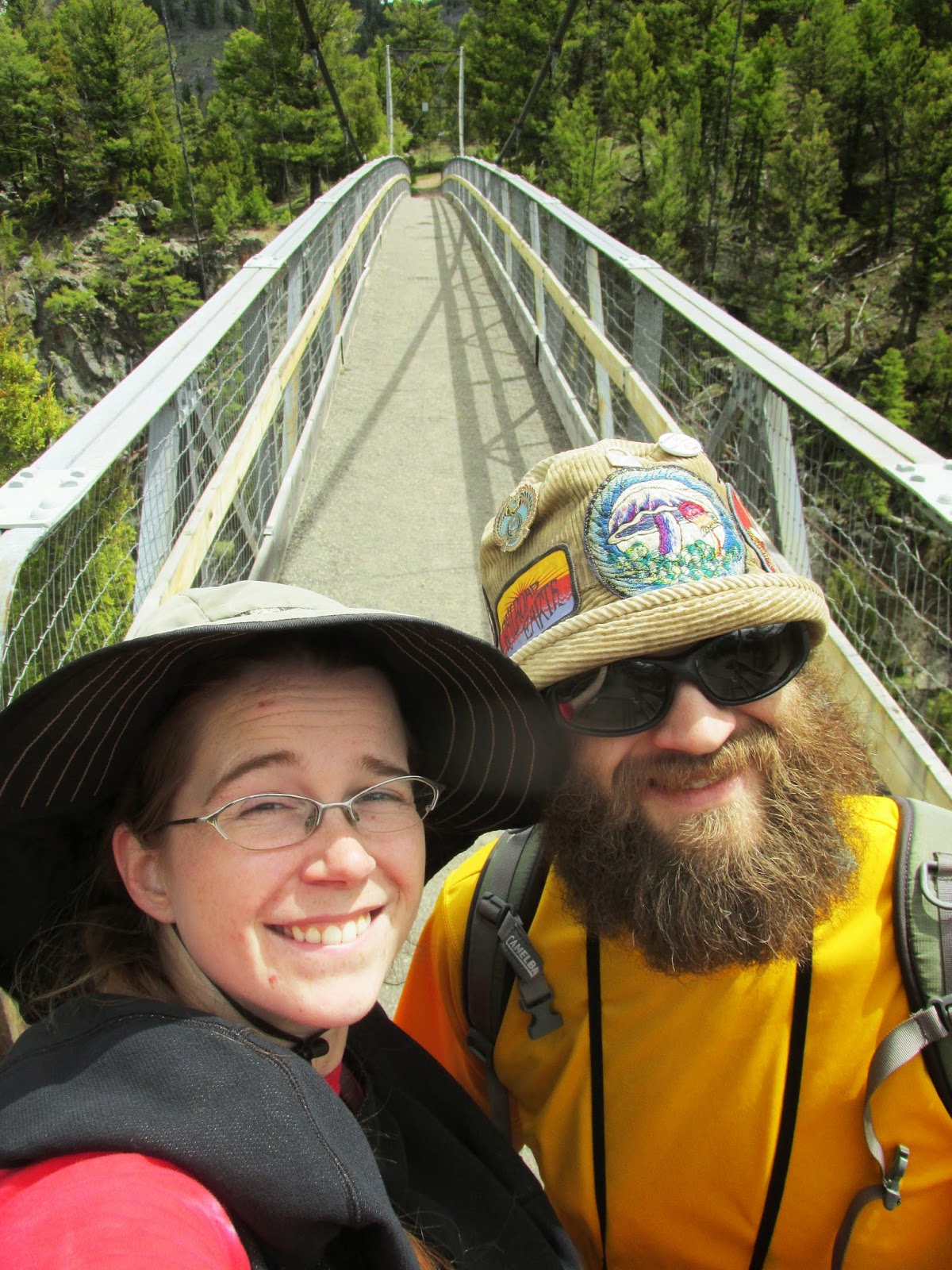 We had a late lunch at the Yellowstone River Picnic Area as that was also the location of the trailhead for our next hike.  Matt surprised me with a four-pack of the new hard cider I'd been eyeing-but-not-buying for several weeks at the store.  I enjoyed one with my hummus, crackers, and pizza.  Oh, and the second cupcake of the day, of course!  There was a herd of female big horn sheep hanging out on a nearby hillside which was fun to watch.  There were ravens that clearly are habituated to human food that were nearly menacing us while we ate.  That seems to be the case every time week eat at this picnic area.  One got so close while Matt was preparing food that when Matt looked up it made him jump with a start! 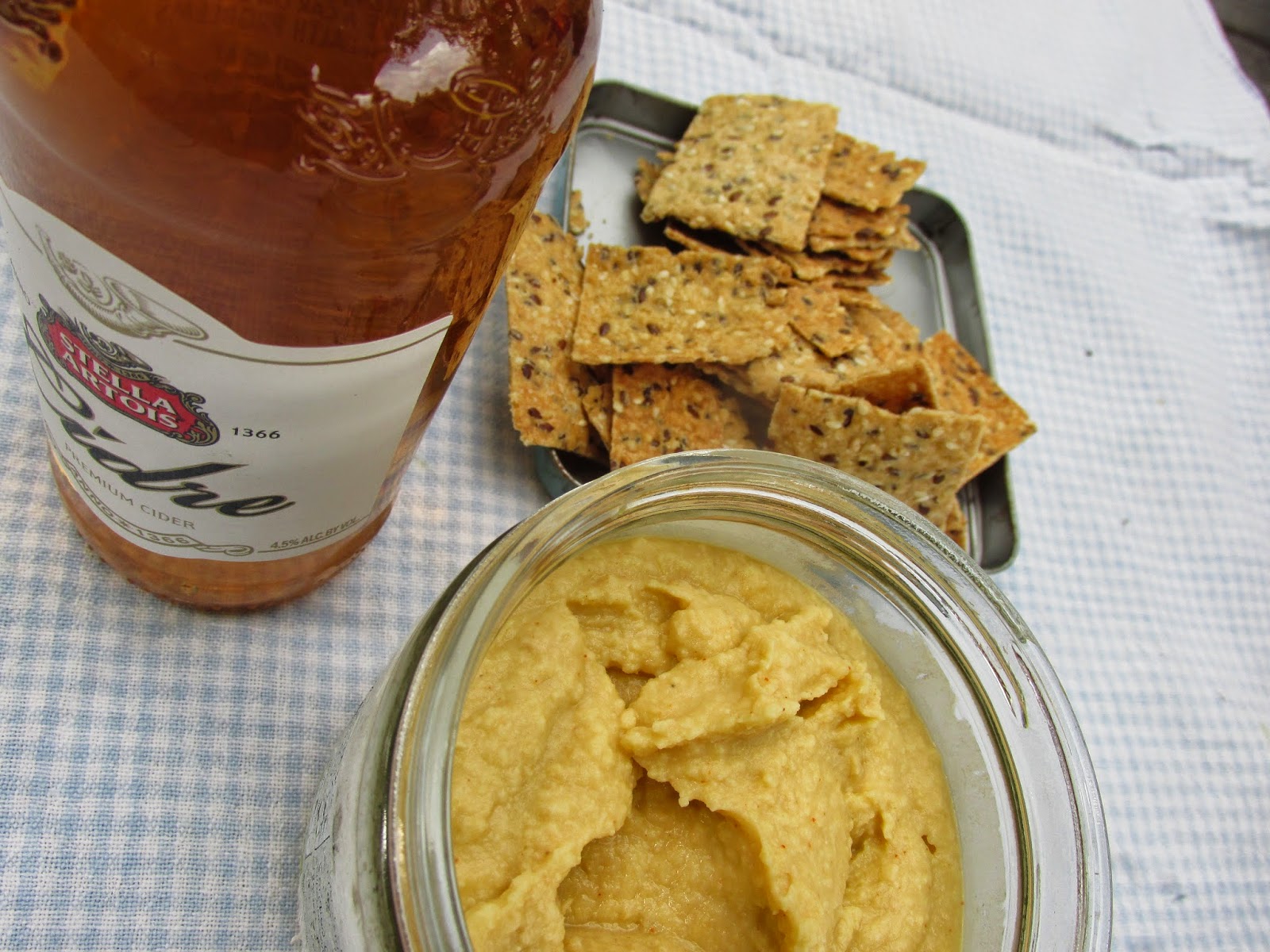 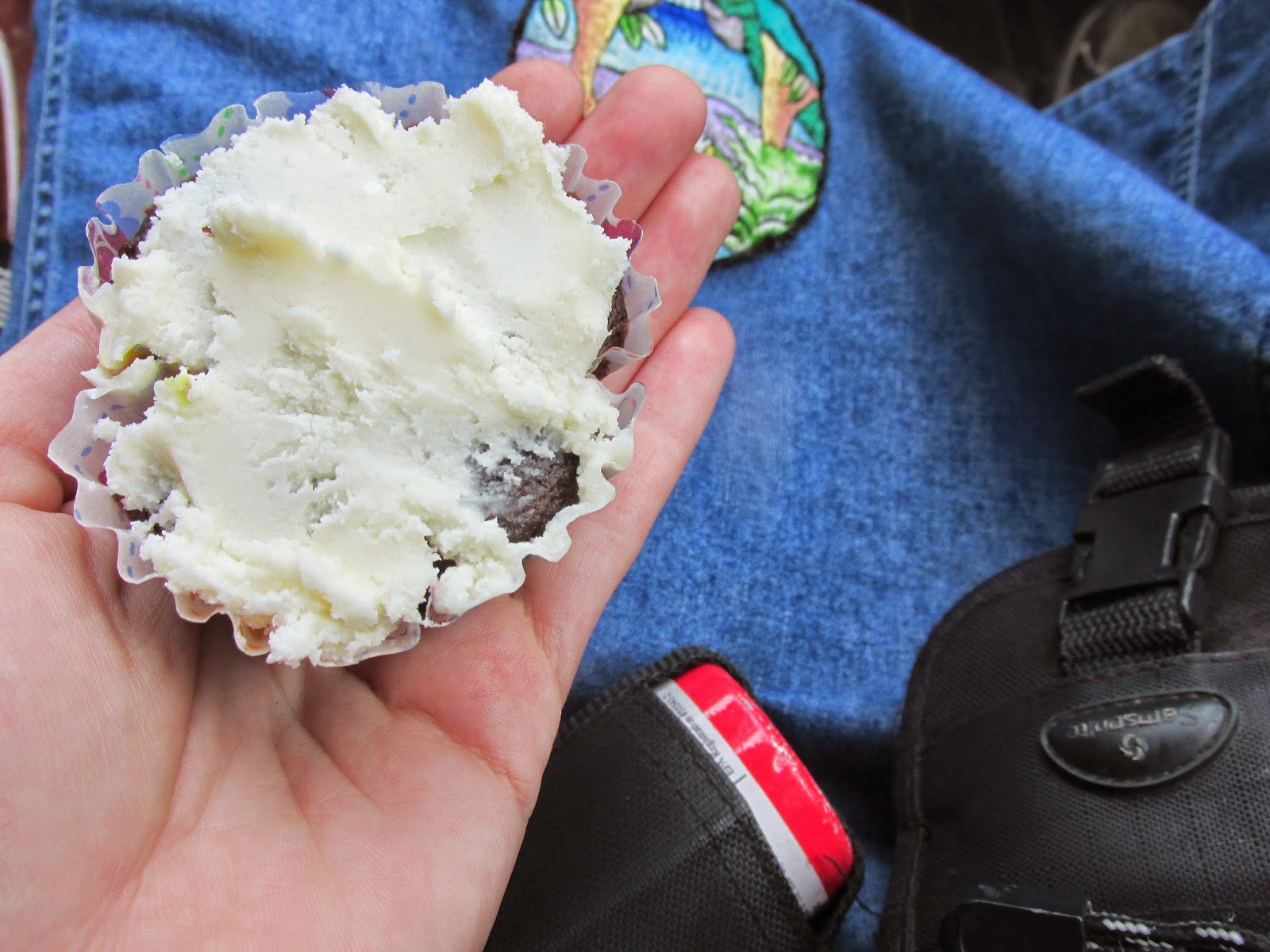 It started to rain over lunch and so we waited around a bit at the picnic area before heading off for our second hike of the day-- the Yellowstone River Picnic Area Trail.  In the end we started and ended the hike in a light sprinkle.  Frankly it felt pretty nice, like air conditioning for hiking.  There were so many swallows on this hike it was kind of unreal and we saw two more herds of big horn sheep.  It was such a nice, easy, relaxing stroll, too, culminating in an expansive view from a high promontory overlooking the river.  We laid up there basking in the glory of it all for quite a while before turning around and retracing our steps to the trailhead. 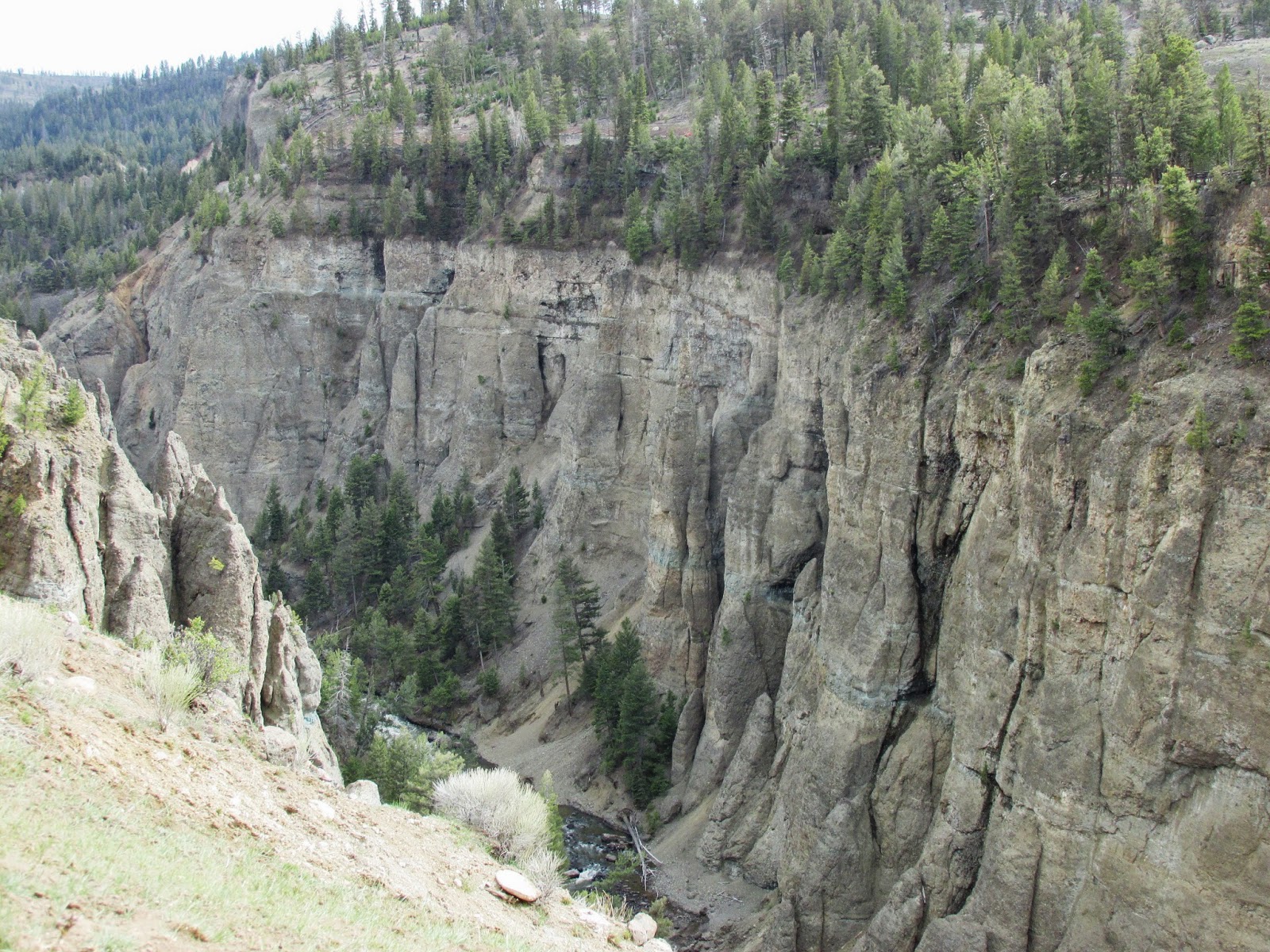 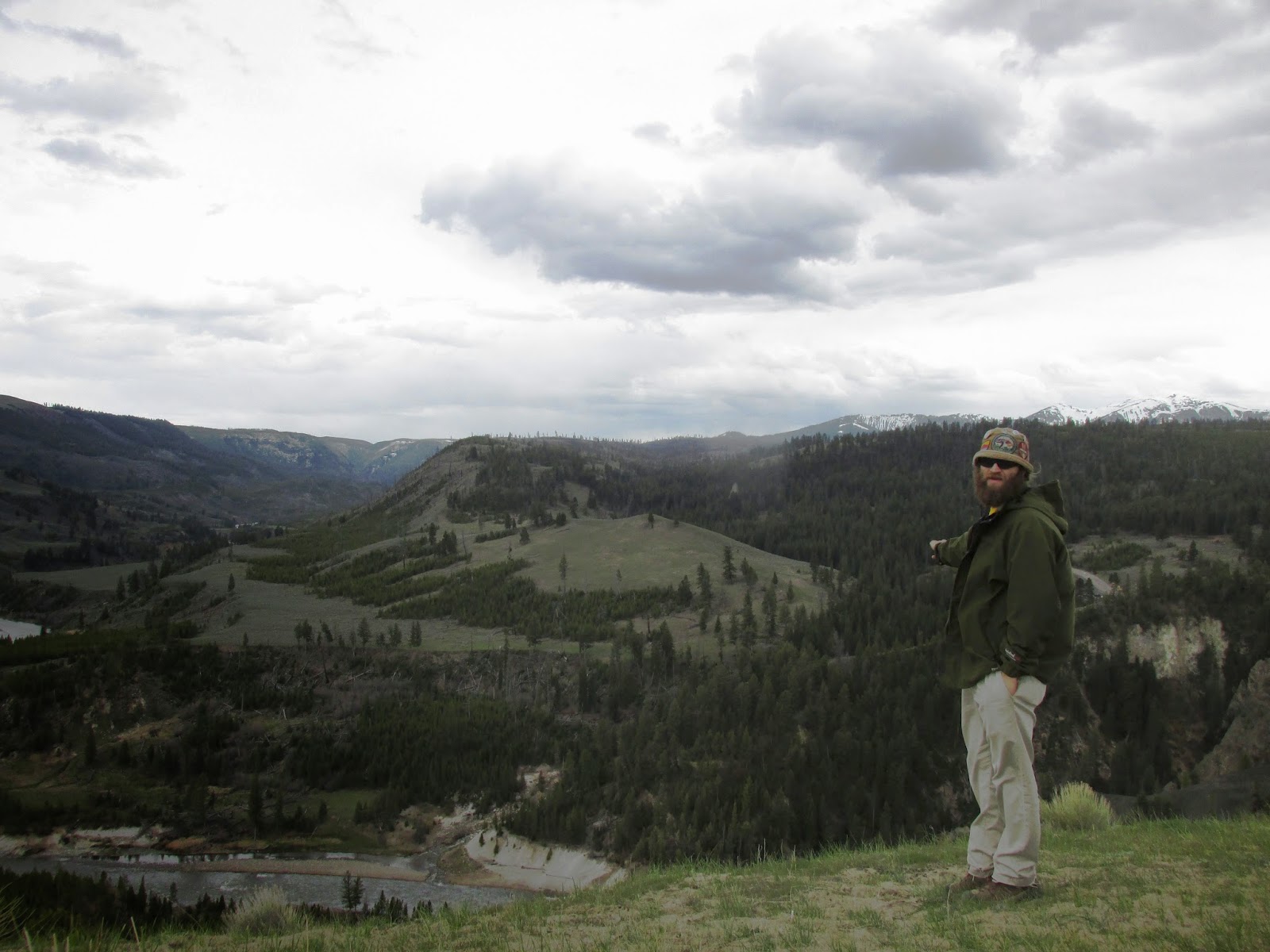 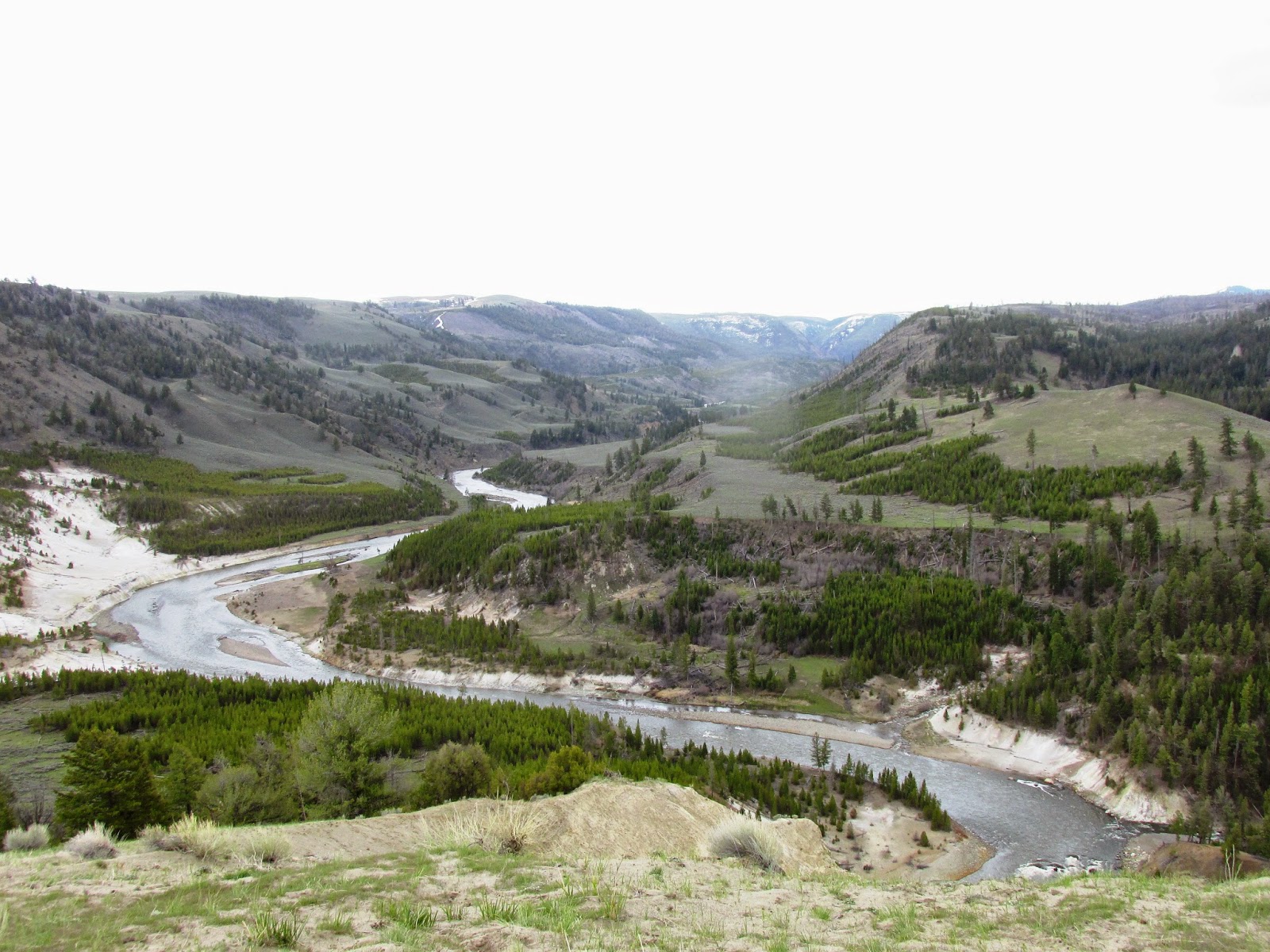 After the second hike we headed on down the road for the Madison Campground where we had a spot reserved for two nights.  I set up camp while Matt fried up some falafel, served with homegrown spinach, chips, and my favorite, locally-made salsa.  And the third cupcake, of course. 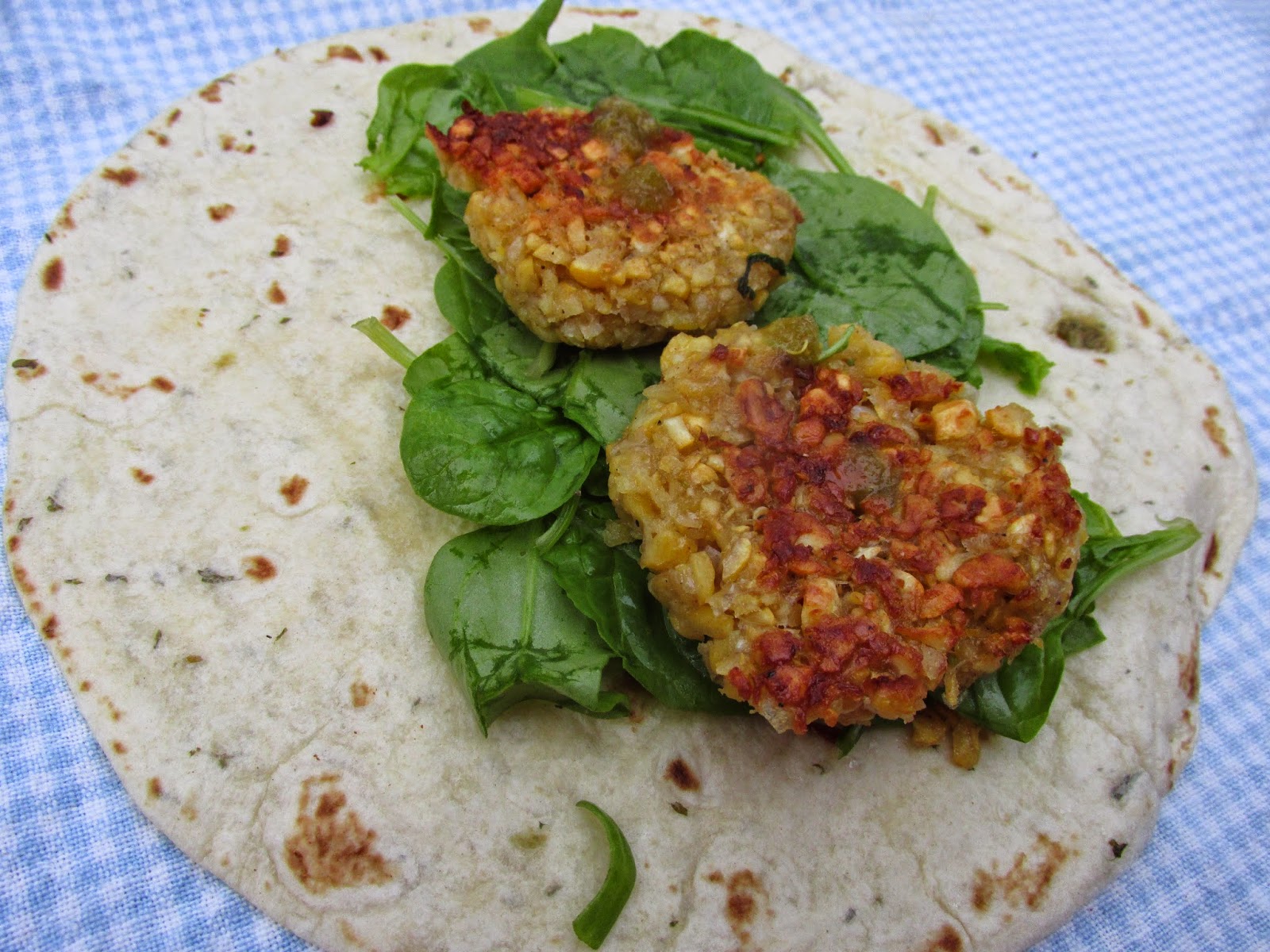 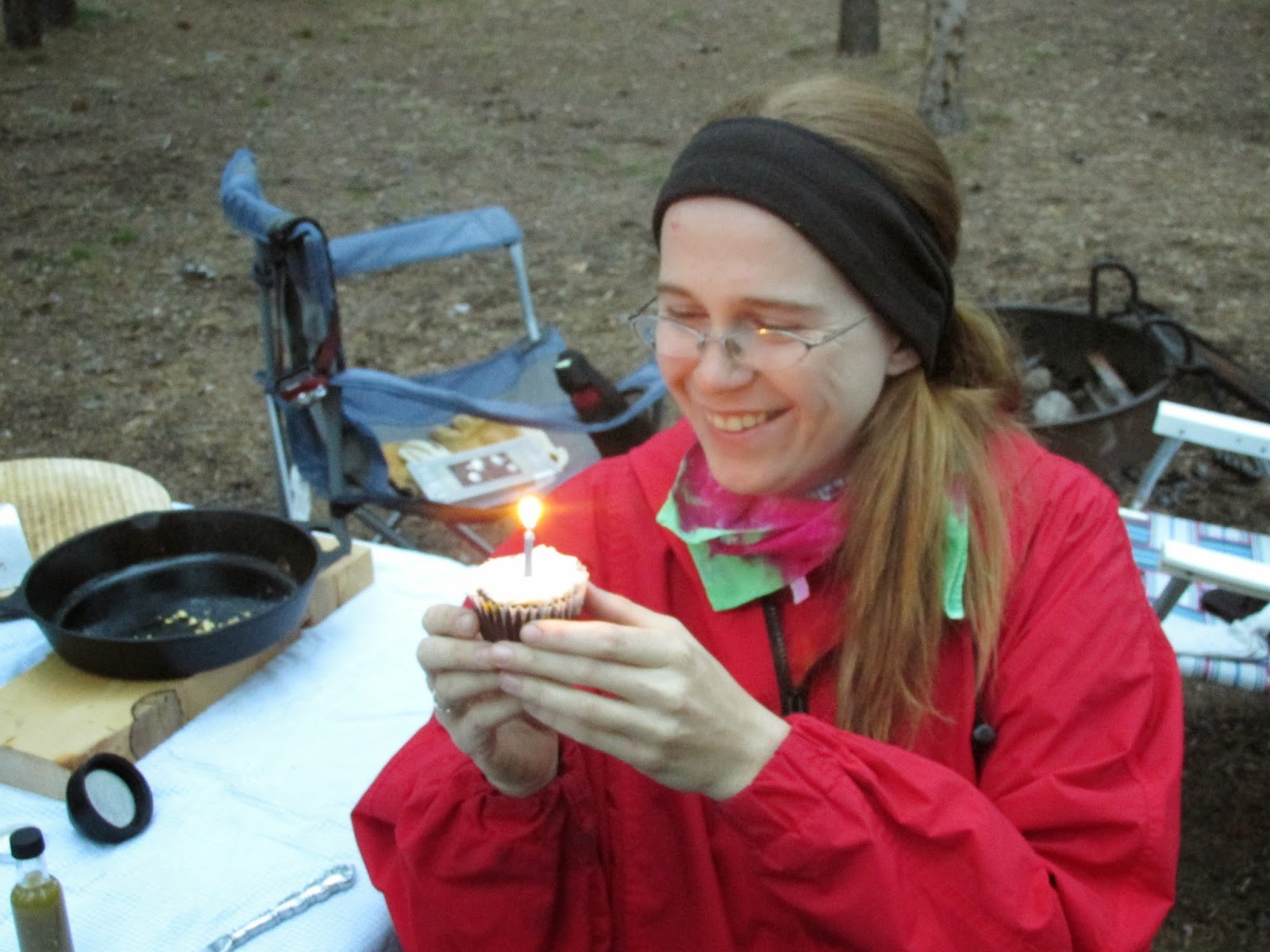 We were both delightfully worn out from our incredible day and so when the rain picked up in the growing twilight as we were wrapping up dinner we decided to skip the campfire and just retire to our snugly, warm sleeping bags with our books.  It was a GREAT day.  That is was my birthday is even better.
By BLD in MT