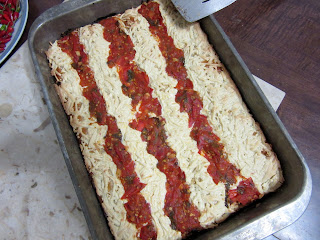 I picked up a magazine from the Free Table at the front door of the library.  The tart on the cover caught my eye.  Matt had wanted to make a fruit dessert and it seemed like a sign from the Universe.  Plus, the magazine is put out by America's Test Kitchen and, as I've already gone on about, we like their work a whole lot. 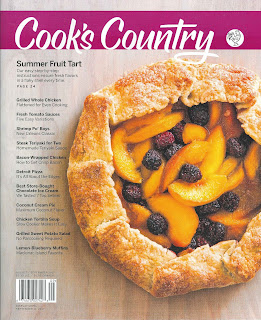 We didn't make the tart though.  We made a totally different kind of pie.  We tried our hand at a Detroit-style pizza.

Detroit-Style Pizza has a few hallmark features:
1) the pie is square instead of round,
2) any toppings--such a pepperoni or olives--go underneath the cheese,
3) the cheese goes all the way to the edge with no crust around the outside,
4) the sauce goes on last.

It is the latter two of these that really makes the Detroit-style stand out, in my opinion.  (Plus the cool history of their square baking pans which, naturally, involves the automotive industry.) 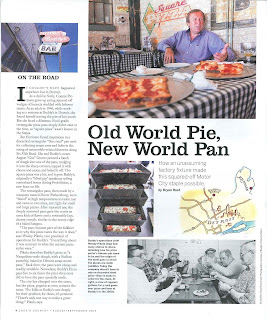 I've eaten square pizza.  Most of the ones I make at home are huge rectangles.  I've eaten pizza where the toppings are tucked away underneath the cheese.  The Powder Keg, an area favorite where I grew up, made their pizzas this way.

However, I've never seen a pizza that didn't start with a crust, then sauce, then toppings.  I've never heard of it pressing the pepperoni right into the dough.

I've also never seen a pizza that didn't have a bready crust all the way around the perimeter.  When I bake up one of my classic rectangular pizzas the center pieces don't have crust, but that isn't the same thing at all.

We pretty much followed their sauce and bread recipes (though we used garden-fresh tomatoes in the sauce and we don't own a stand mixer so I kneaded the dough by hand).  We used Daiya mozzarella shreds as our cheese of choice. 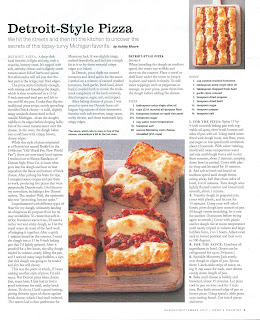 Because there is no true crust the diner is in for a tasty pizza surprise.  The edge, where the cheese meets the pan, was the surprising hero of the meal.  It had a crisp chewiness to the rich cheesy flavor and, well, it was just wonderfully yummy.   Those folks in Detroit were on to something with their spread-the-cheese-to-the-edge thing. 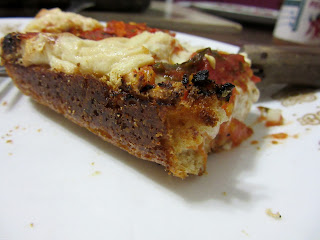 Matt and I were both incredibly pleased with our little pizza experiment. Mmmmmmmmmm, even cold the next day for lunch was dang incredible.
By BLD in MT