My First Dress - A Sewing Retreat

I am a budding seamstress.  I have a strong desire, but limited know-how.  So when my mother called to say that there had been a cancellation at the sewing retreat she attends each fall I was lucky enough to be able to snap up the spot and go with her.  The sewing retreat is put on by a group of women my mother knows--former colleagues and friends, her sisters, her mother, etc.  They gather each fall for a marathon weekend of sewing--mostly quilting--and eating, drinking, and being merry. 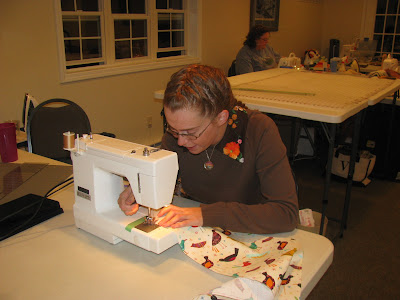 It was a wonderful opportunity for me to spend time with my family.  I've known most of these women all my life, but this was one of the first times I've got to interact with them as an adult.  It was so much fun!
And talk about a supportive place to sew.  "We can make that work," was the motto of the group.  When I was stumped I had a slew of people to ask for guidance.  When they saw me doing something in my muddle-through-and-figure-it-out-as-I-go style they offered simple and valuable pointers about how they like to do it.  They were so helpful.  I learned a ton.
I put in my first zipper and thus, used the zipper foot on my machine for the first time.  I learned to do a blind hem, involving another foot attachment I'd never used.  I learned pinning techniques that saved me much frustration.  I learned "speed sewing" or "chain sewing" which will not only save my time, but also thread.  I learned to french braid my hair.  And so much more.
Most exciting for me was that I used all these new skills to complete my very first dress.  It turned out so well and fits me so good that I can hardly believe I made it myself.
I told them I'd feel bad hoping that they have a cancellation again next year because I'd hate for anyone to miss out on that awesome weekend, but I also told them I'd be more than happy to sub in again any ol' time they needed.
Now I feel completely inspired.  I plan to go make another dress straight away while its all still fresh in my mind as well as tackle a few other projects that have been waiting for me to find the time/motivation to complete them.
By BLD in MT