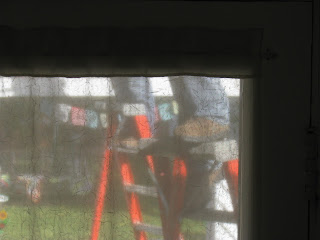 Gutters installed on the house.  Now we can begin to harvest rainwater, protect our foundation, and reduce ice on the back patio this winter.  I smiled when I looked out the backdoor window and saw only two sets of feet balenced high on ladders. 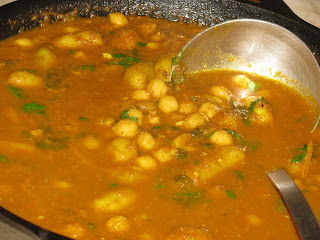 Yummy chickpea and potato curry made.  We're trying to use up the smallest of the fingerlings rapidly as they don't keep nearly as well as their larger counterparts. I don't know when Matt started liking spicy so much though.  I almost thought it was too much and he--shockingly--seemed like it was no big deal.  This is the third time this has happened recently.  Its quite out of character, but maybe he's just finally developed a tolerance for the heat. 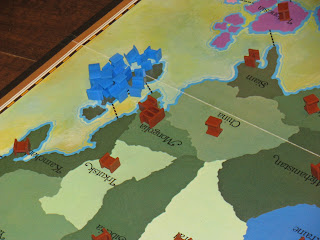 Risk played.  I conquered the world--not to brag--but, like usual.  I am unstoppable.  Behind my peaceful facade is a ruthless world leader waiting to get out.  :  )  Actually, I would be a terrible world leader...so I restrict my tyranny to game boards and little plastic people. 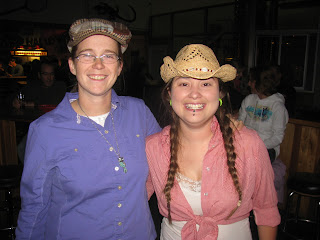 Bluegrass music enjoyed with friends in costumes, like Hannah the little cowgirl.  There was a whole zoo--lions, tigers, lizards, giraffes, penguins, etc.  And an alien.  And a bass player in a skin-tight Spiderman suit. 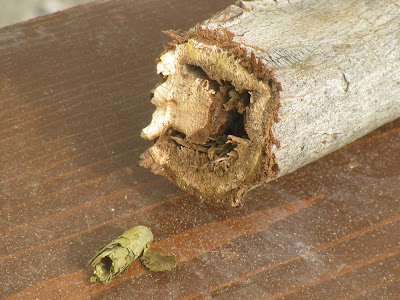 Weird nature finds.  This cocoon-like item was safely tucked in this hollowed out tree limb.  It's made of carefully wrapped leaves!  It was amazing!  One end was open, as you can see, and there is a small pinprick of a hole on the side of the tube.  I need to do some research!  I find something neat every time I dig around in the woodpile.  Actually, this time I also found what appeared to be a very flat wasp's nest on the end of a log.  I poked at it and it revealed that the log was hollow and the nest went into its depths.  So it looked small and flat, but really the wasp's had just saved themselves a lot of work my using a hollow.  Crazy cool. 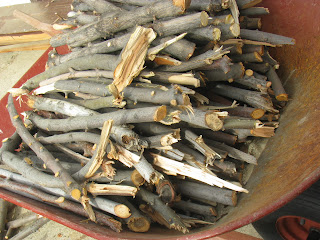 Wood cut and stacked.  We don't have a big woodpile.  Yet.  This is our first winter with a wood stove.  We are really looking forward it though.  Always-cold me more so than the always-hot Matt.  We were gifted a bunch of wood that needed cut and we'd also inherited a big messy pile of it (and other riff-raff) alongside the garage from the previous owner.  Matt cut with the saw, I snapped smaller branches for kindling with my foot, and we neatly stacked them. 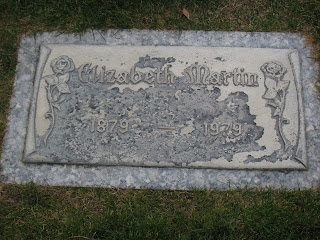 New cemeteries visited.  Matt told me there was a cemetery he'd meant to show me because it was kind of unique and near our house.  So after the wood stacking we rode bicycle over.  It is three levels, I think.  Terraces of graves with stairs between the levels.  There was also a wall where people who'd been cremated could have their remains preserved behind a marble tile.  It was a fairly new cemetery.  Most of the graves were from the 1970's all the way up to those from 2012 which are obviously still very fresh.

This woman was 100 years old.  Can you imagine all the changes she saw in her life?  The world of her birth would have been a completely different world than the one of her death.  It was a very interesting thought to consider.  Matt and I tossed out a few ideas about what it might be like when we are 100.  He's much more optimistic than I am.  I love him for that.  Its good for me. 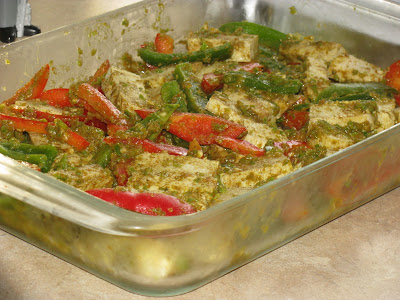 Dinner marinating and ready to be popped in the oven.  We made the Ethiopian Seitan and Peppers, but used tofu instead of seitan.
By BLD in MT