Cats and kites don't mix.  Just a little something I learned recently.

I decided to take advantage of the blustery weather by taking my kite out for a spin.

The wind was being fickle.  We launch and it would fly for a bit and then the wind would change directions completely and it would crash before I was able to make the needed adjustments to keep it in the air.

After one such crash I noticed an orange kitty making a beeline for me.  I do not have any animal companions of my own and so live vicariously through neighborhood cats and friends and family who do have animals.  I told Matt to wait on launching the kite again so I could pet him and set the handles of my kite down on the grass. 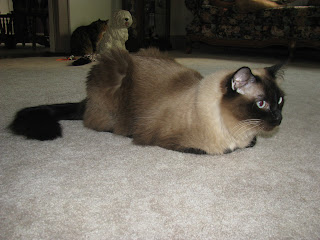 He started purring up a storm almost immediately.  He was small, not fully grown, and vigorously friendly.  Matt even came over and gave him some rubs.  (Matt usually lets me and the cats be because he tends to spook them off and thus, ends my fun time.)

It soon became clear though the the cat was not really making a beeline for petting.  He was making a beeline for what must have seemed to be possibly the most superb-looking string for a cat to play with ever.  I am such a sucker for cats I would have probably let him play with my kite strings, but Matt was the voice of reason and suggested it might not be a good idea.  So I took the strings away...or I tried to.  It was tough to get the cat to let go long enough to lift the strings (which were spread out across the grass for the entire length of the string) up high enough to keep them out of his reach. 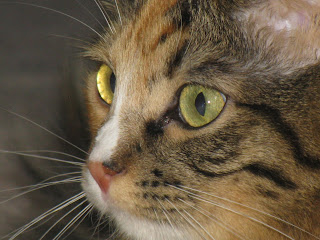 And when we had successfully done that much the kitty started pouncing and rolling on the kite's tail.  Once he even thwarted an attempted kite launch by hanging on to the tail!

When we were trying to fold it up afterwards he did his best to prevent it--laying on top and getting wound up in the strings and tail.
It was so darn funny that it wasn't even frustrating trying to disengage him from the string.  The fickle wind was a bit disappointing, but the amusing antics of that cat were reason enough to take the kite out.
By BLD in MT