This was the first year that we grew eggplant, as I've mentioned.  Since we also grow tomatoes and peppers it was only natural that it is also the first year we'd make Ratatouille.  Actually other than a cute full-length cartoon I'd never really heard of it before this year and certainly didn't know what it was comprised of.  One of my Bunco group made the suggestion when I mentioned growing eggplants.  The following recipe is our modification of a recipe from one of the Moosewood cookbooks.

We ate it as a soup, as a pasta sauce, as a pizza sauce, and as a dipping sauce for cheesy potato boats after we made gnocchi.  The last was, apparently, the only one I took a photo of....for some reason.  It was really darn tasty and filling in all capacities.  The eggplant gives it such a unique texture and flavor.  Eggplant is so awesome! 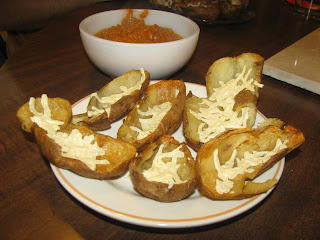 Heat olive oil in a deep pan. Add garlic, onion and bay leaf and sauté over medium heat for about 5 minutes.

Add eggplant, salt and herbs and stir. Cover and cook over medium heat, stirring occasionally, for 15-20 minutes until eggplant is soft.

Add peppers, black pepper, and tomato sauce. Cover and simmer for about 10 more minutes, or until zucchini and bell peppers are tender.

Top with fresh parsley if desired.
By BLD in MT