Matt and I saw our first wild screech owl (an Eastern Screech Owl, to be specific) two weeks ago (and I can't believe its taken me this long to blog about especially given my extreme excitement about it).  It was totally random good luck. 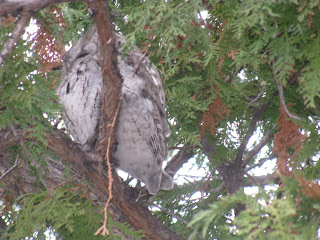 I was walking across campus and noticed a group of environmental science majors whom I know staring up into an evergreen tree near the Student Union Building.  As a birder I recognized immediately that this meant there must be something cool up in that tree.

And there was-- a snoozing eastern screech owl--nearly invisible until you really stopped to look.  I am sure I would have walked right by without noticing except for the dozen people staring up into the tree which, as I said, was pretty much a give away.

One of the students happened to be having an on-campus meeting with an ornithologist who told us that the owl was probably a female (based on her size) and that he was surprised to see her roosting on an open branch like that as these very small owls tend to roost in cavities in order to be protected from the larger birds of prey that might like to snap her up for lunch as she slept.

She was SO cool. 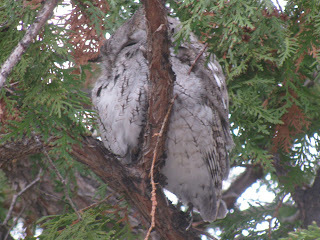 When I worked at ZooMontana there was a screech owl, but captive animals and wild ones are in totally separate categories for me.  The zoo owl, Andy, I believe he was called, used to be taken outside for flights attached to a fishing reel--not exactly on a level playing field with the remarkable and stunning wild creature who would just occasionally open an eye ball to see what all the fuss was about going on below her.  So even though, technically I'd seen a screech owl before, it was a whole new and exciting experience for me.  And I was overjoyed.  I went over to watch her several times that day--whenever I had the slightest chance or reason to slip away from the library.

No one's seen her around since, but she was the talk of campus that one day.  And it really made my day.   I called Matt at home and told him to pop by on his way to work as I was sure she'd be roosted there still.  She did not disappoint and so even Matt got to watch her a bit. 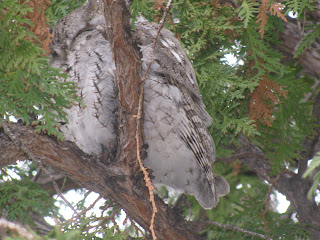 Matt and I adore all birds, but owls are especially favored in our hearts---which makes it all the more frustrating that we almost never have seen them.  This is only our second wild owl in all our years of birding.  And then we hear stories from people all the time about how they see owl trimming hedges or something.  We're out looking and we never see them!  It must be that the-watched-kettle-never-boils thing, I guess.
By BLD in MT