We were in Helena over the weekend selling tie-dye and visiting my step-mother.  We stopped by the Natural Grocer store yesterday on our way back into town to snag some staples (like onion) and maybe find something we wanted for dinner---something simple as we were pretty lacking in culinary motivation.  As it happened Daiya cheese was half off so we snapped up several packages to toss in the freezer for some rainy day and one package to turn into an awesomely easy dinner that still feels substantial and nourishing--stuffed veg quesadillas. 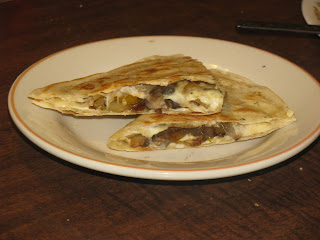 We sauteed up some yellow and green peppers, onions, and mushrooms in a little bit of olive oil.  We also added some leftover taco-spiced lentils we'd had last week in burritos.  I'd planned to include corn in the veg mix as well, but we forgot about it until dinner was on the table, oh well, next time! 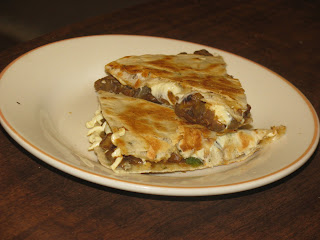 Combining the sauteed veg, the lentils, and the cheese between two tortillas and cooking on the stove top until the cheese is melted and the tortilla golden results in a very quick and satisfying dinner with very, very little effort--which is sometimes just what the doctor ordered.
By BLD in MT