This will be our third year gardening at our "new" house.  Each year we've added fruit.  In 2012 it was raspberries and strawberries.  In 2013 it was blueberries and red currants.  This year Matt had his heart set on planting a handful of fruit trees. 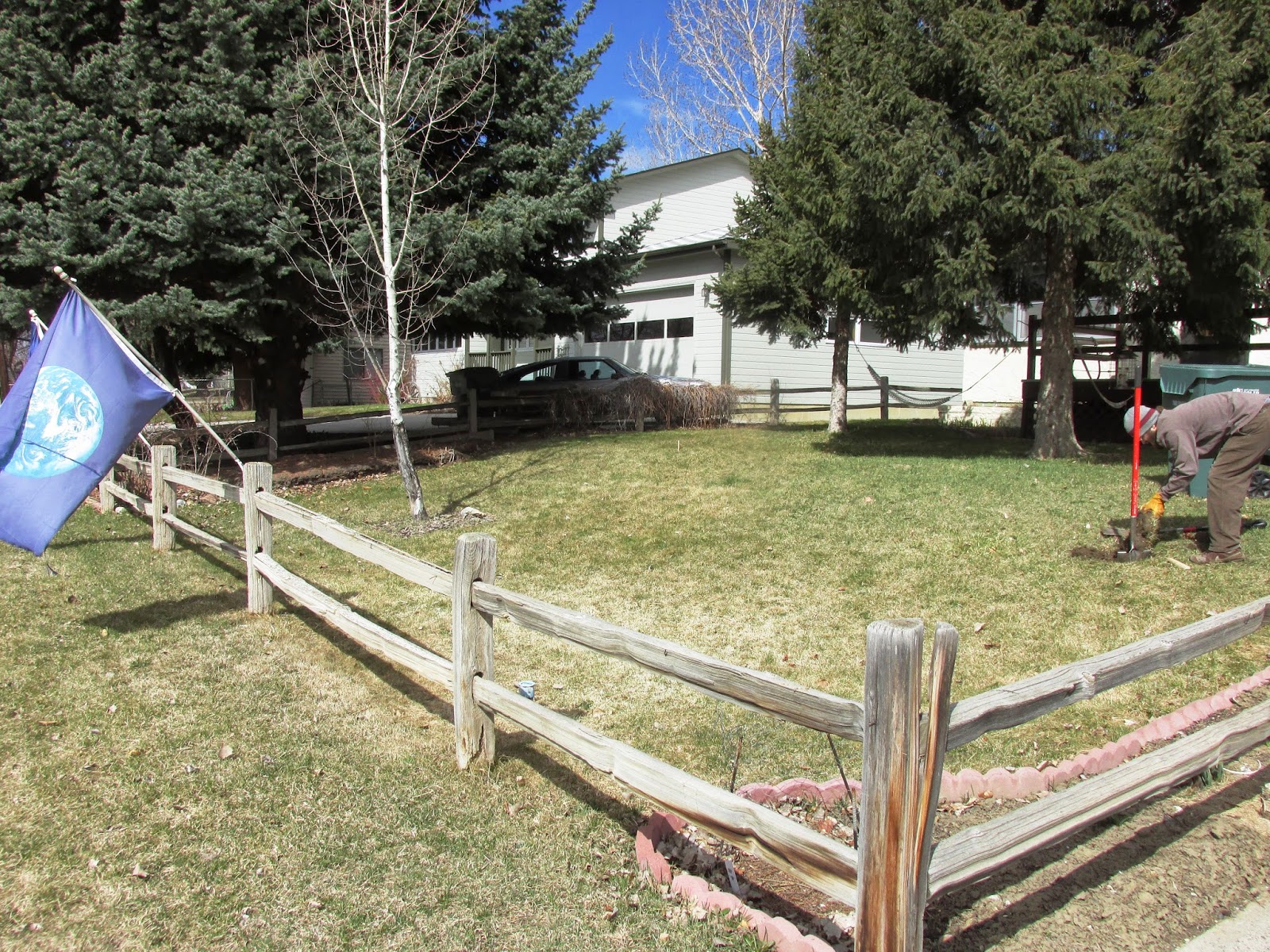 He hoped to buy them from a local nursery.  He wanted fruits that stored well.  He wanted trees that were hardy enough for Montana winters. But, he found the offerings from our local nurseries to be either non-existent or wanting so he sort of stalled on the project.  Then he thought he'd waited too long looking for local trees that he missed the shipping window for some he'd been eyeing the seed catalogs that have been steadily filling the mailbox since January.

Much to our surprise we then found a selection of fruit trees at Costco, of all places--including varieties Matt had been researching.  They were affordable, readily available, and most listed the root stock the tree had been grafted on.  There were a few varieties for sale there which, upon further research, proved to only be hardy down to zone 5--not zone 4.  But, we didn't buy any of those trees.  It pays to do a little research and resist the lure of the impulse purchase! 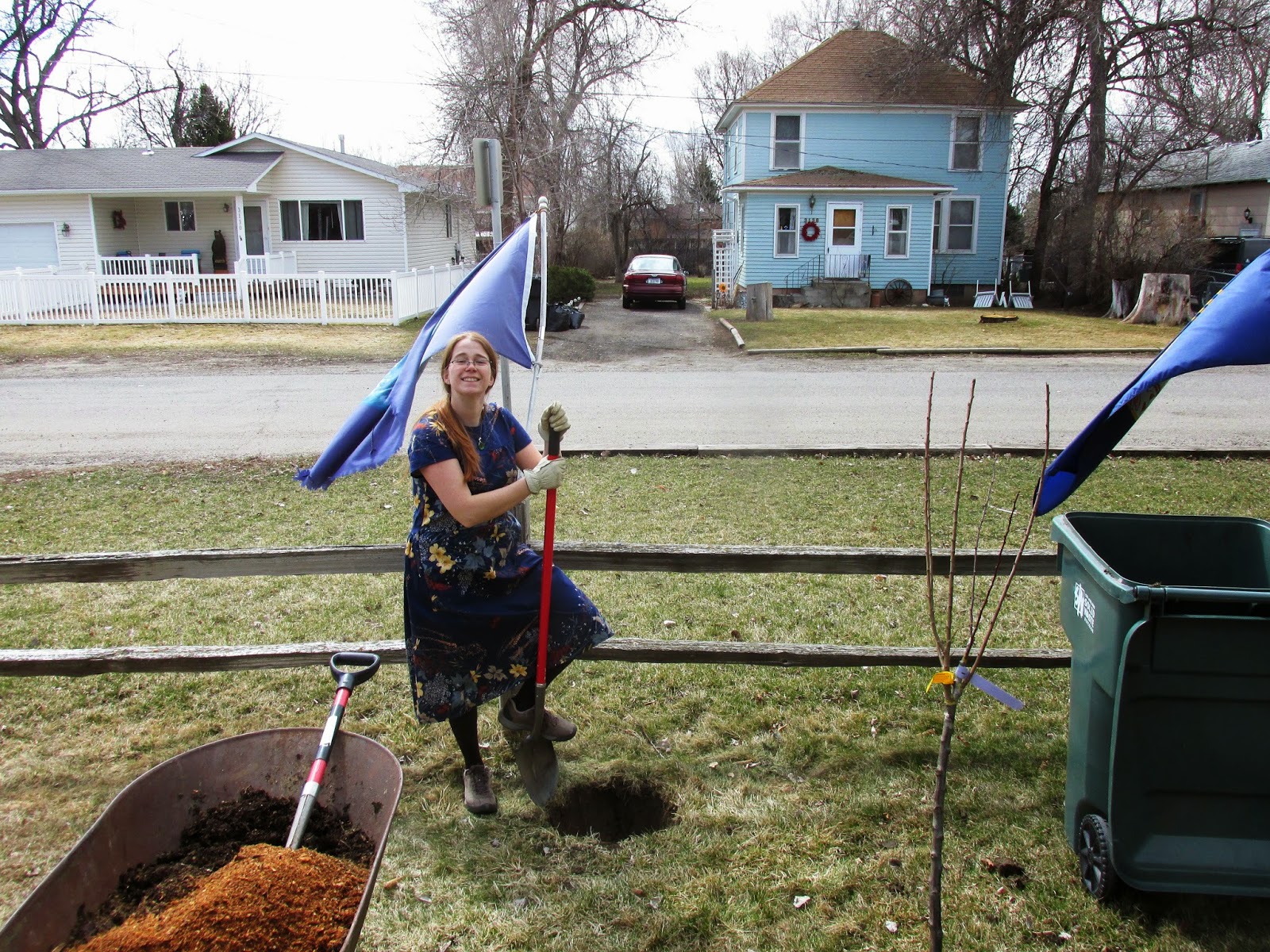 We ended up selecting five semi-dwarf fruit trees--three for the front yard and two for the back.  We measured out 20 feet between each tree and are going to try a sort of extreme pruning protocol so they remain small and manageable for easy picking with maximum fruit yield. 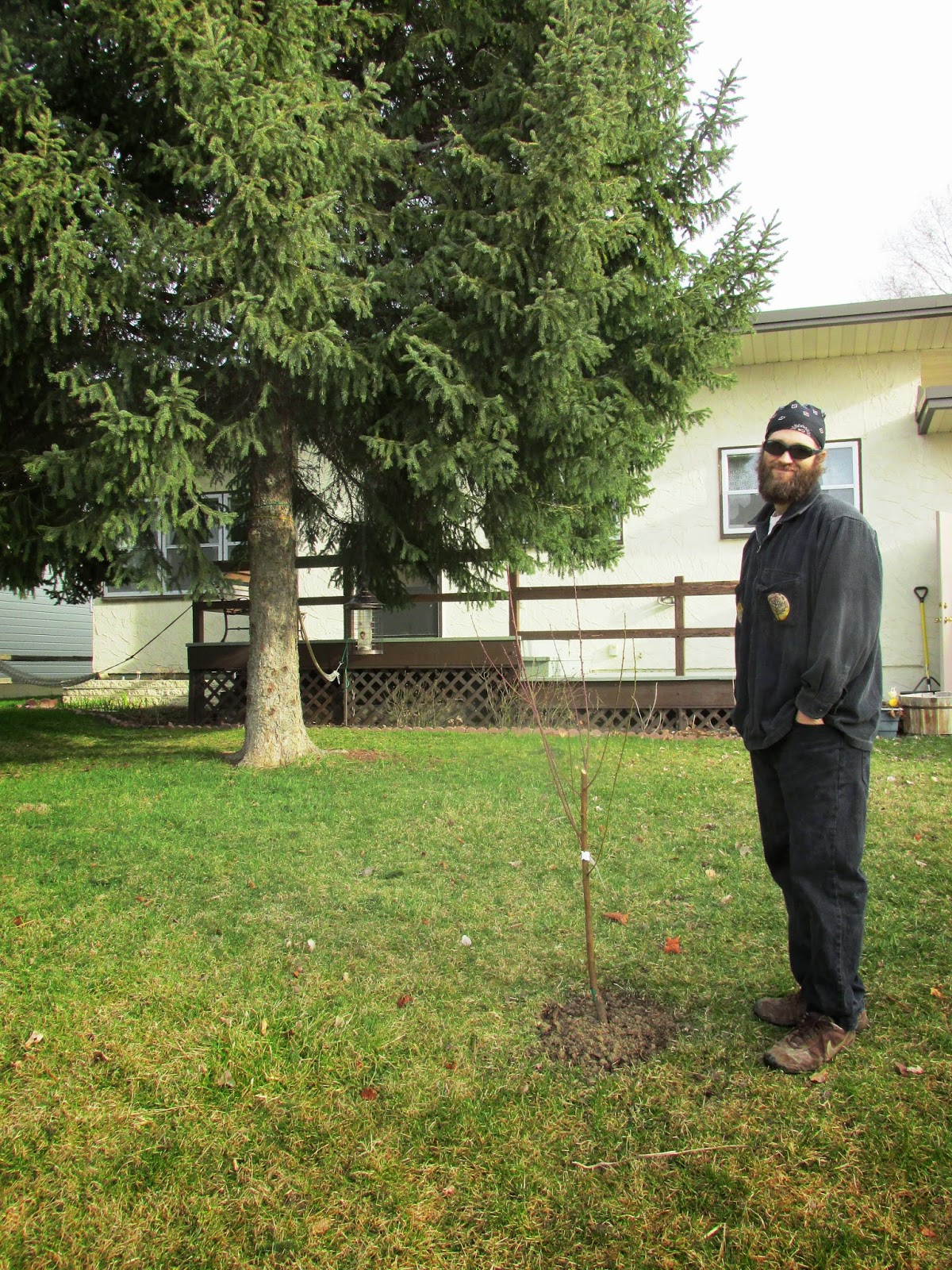 We got two apple trees--a Red Haralson variety that was first introduced in the early 1920's and Honeycrisp which is my personal favorite apple...even if it is a noobie--not being released for general cultivation until the 1990s.  It is, as the name would suggest, just so darn crisp and sweet.  I think its just the perfect apple for eating raw.  Its pretty much the only apple I buy in a store.  They are sure expensive though.  I look forward to having my own supply years from now.  Both apple varieties were bred by the University of Minnesota. 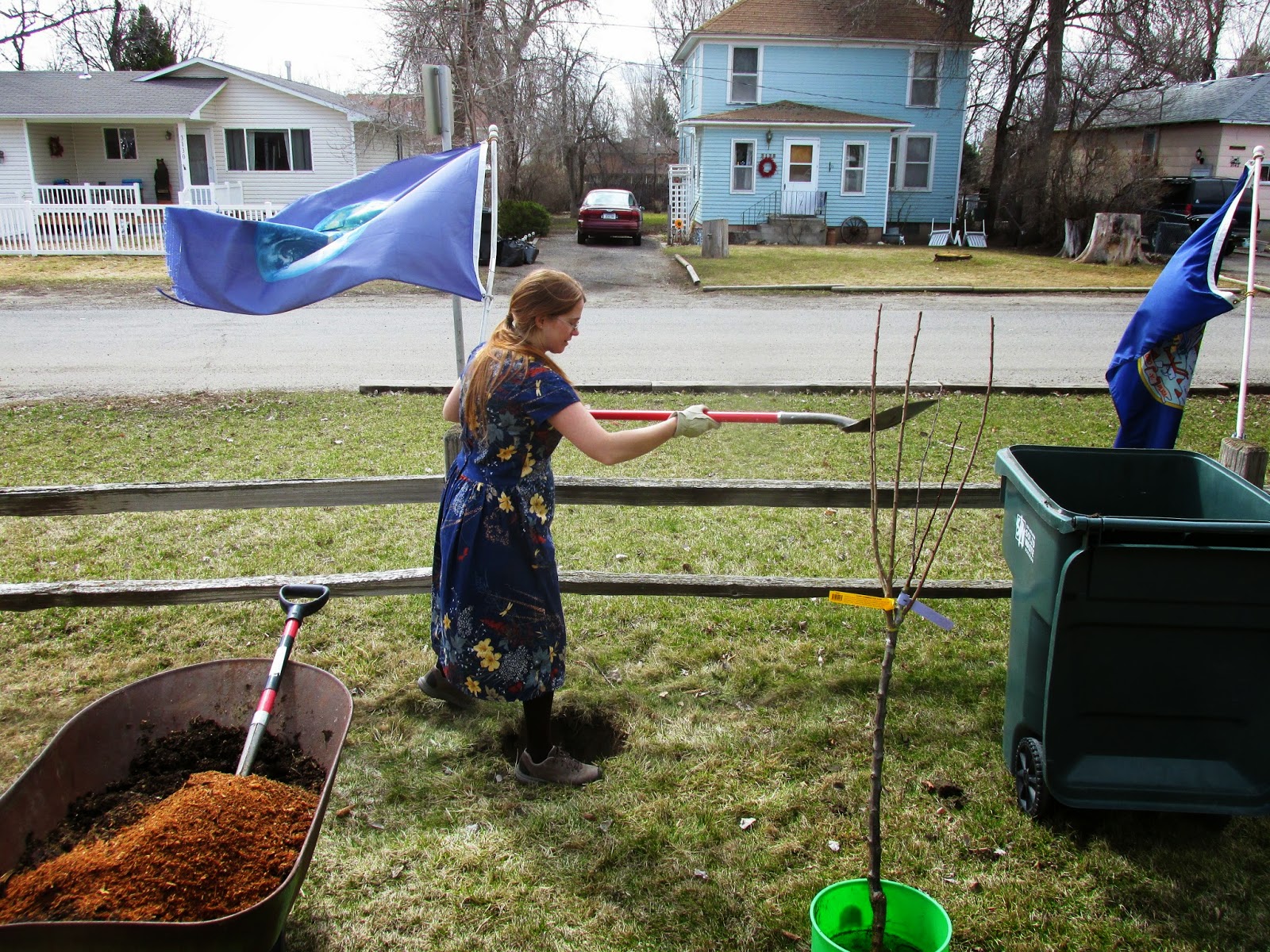 We also got a Reliance peach tree, a Mormon apricot tree, and a multi-fruit plum tree.  We've really, really wanted a peach tree ever since we were shown the one just down the road in Park City.  That sun-warmed, succulent, tender peach was the best one I ever tasted.  Matt tried to sprout one from the pits of that Park City tree, but they each molded and ended in failure. 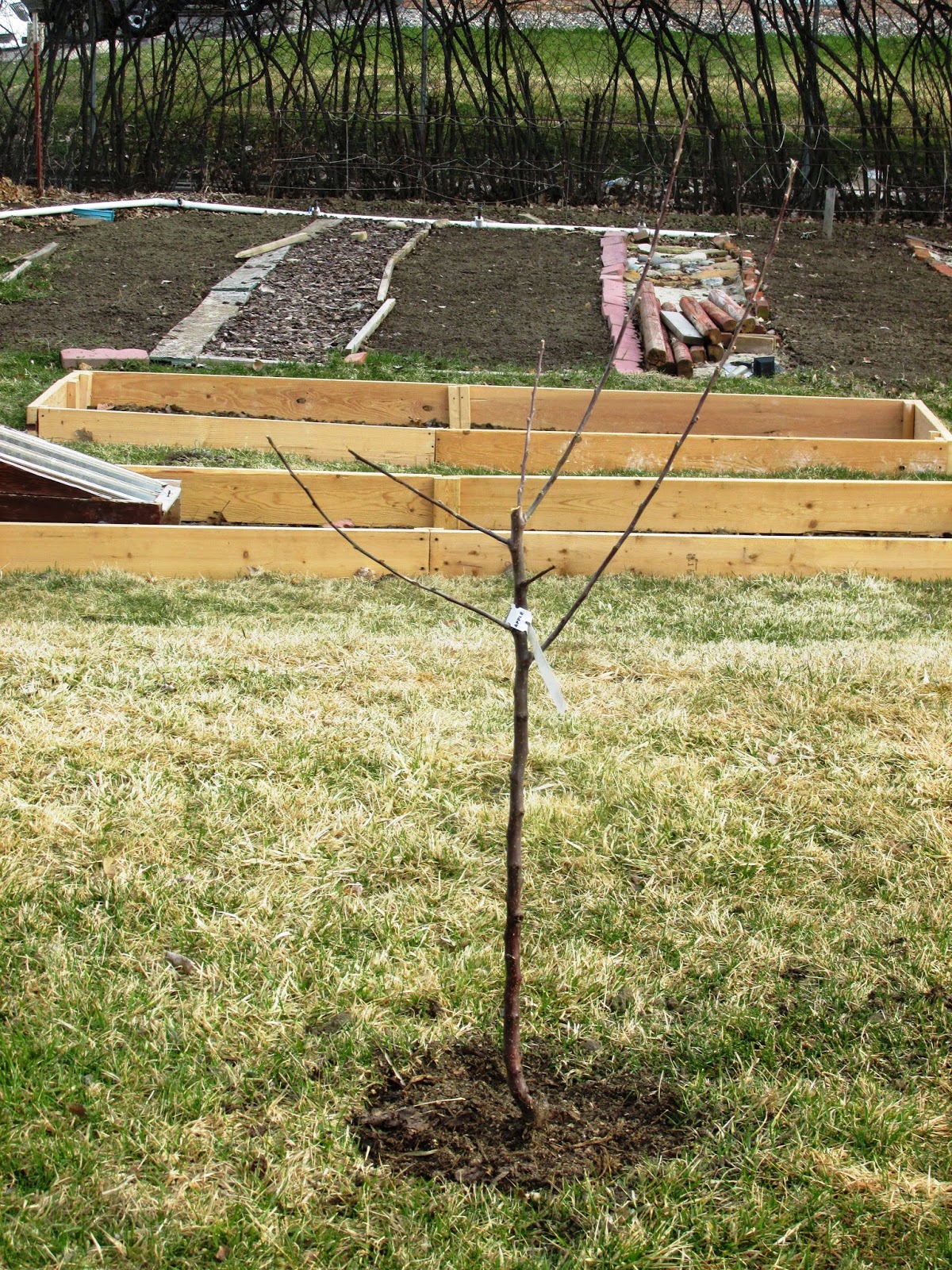 The plum tree had a list of possible varieties, but we won't be able to tell which are grafted on our tree until it actually sets some fruit.  It will be interesting to compare the different varieties for eating, canning, and storing. 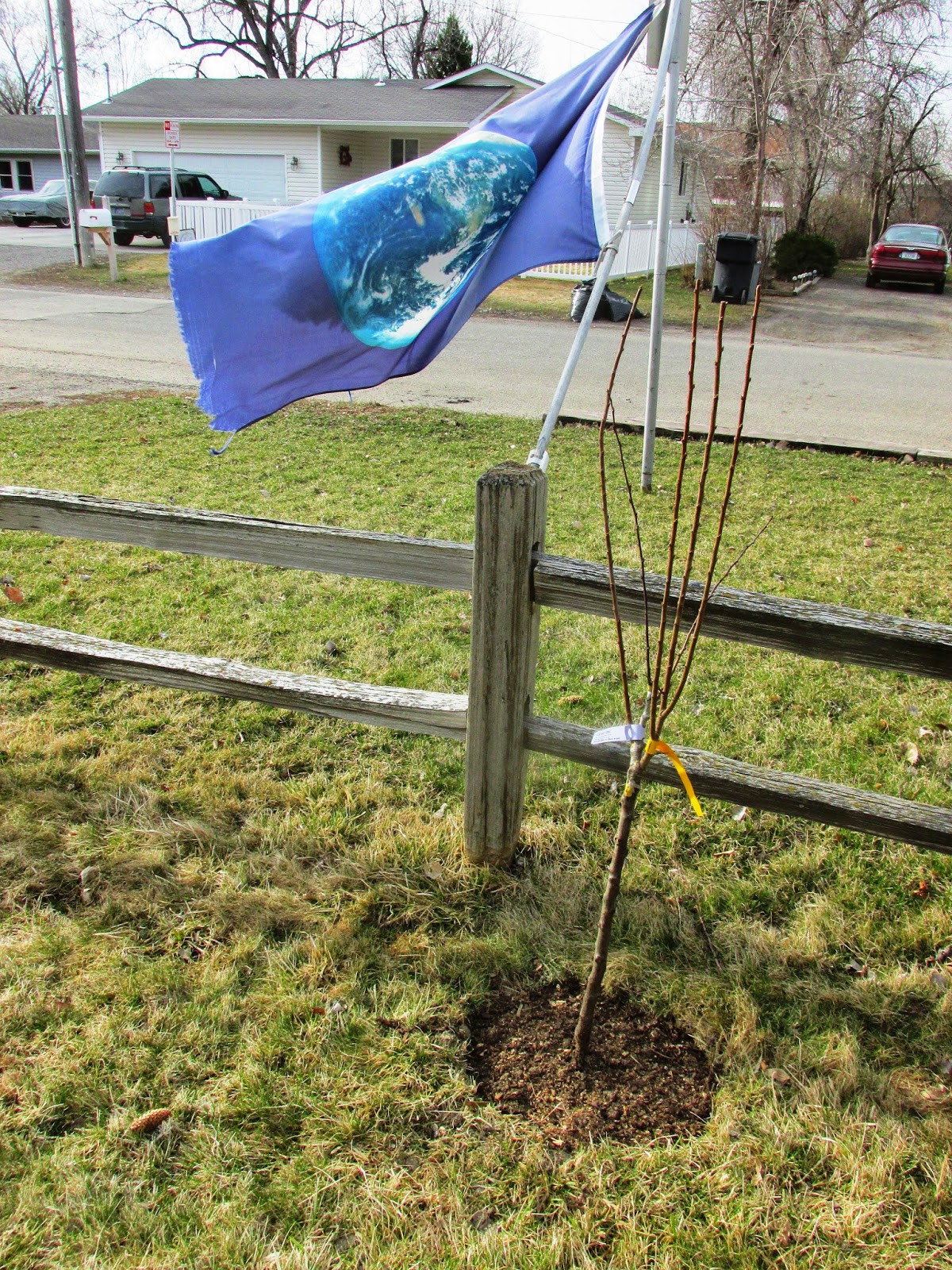 Hooray!  Now we've got our own itty-bitty home orchard.  Now we've just got to be patient and watch it grow up around us.  We're super excited about it.
By BLD in MT