Skulking Around in the Woods and Other Minnesota Adventures

We drove to Minnesota for the weekend, Matt, his brothers, and myself.  It was pretty crazy, really, but worthwhile.  1,430-ish miles in three days--and one of those three days we were just playing golf, birding, and hanging out.  So, yeah, long driving days with a sweet outdoors family day sandwiched in there in the middle.  It was worth it.  (Plus, it was Matt's birthday on Saturday, too.) 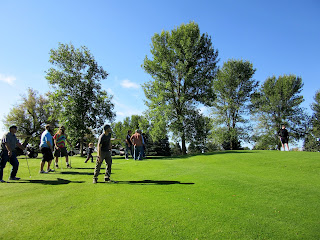 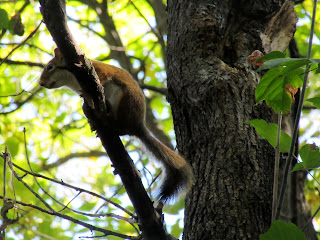 I am a silver-lining type person.  A seeker of the lemonade stand when life is sending us lemons.  That sort of thing.  Matt's family must be, too.  When Matt's youngest uncle died in an automobile accident nine years ago a new tradition was born--The Kim Knaack Memorial Golf Tournament.  The funds from the golf entry fees, silent auction, and raffle go to buy music equipment and instruments for the area high school.  Kim was very musically talented.  Or so I am told. 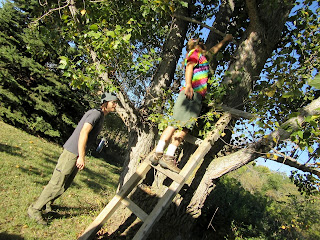 I wish I'd know him better--I only joined the family ten years ago and so think I only met him once.  In any case, I can tell that his legacy is pretty great, even if I didn't get the chance to know him better in the flesh.  He brings his family together--from near and far--for at least one day of celebration and fun together each year.  He has helped connect countless instruments, music stands, pieces of sheet music, etc. to the budding musicians from his area.  If he had to go earlier than his family would have like I am so impressed with what they've all done with it.  They found a silver lining.  What good folks.  I love them so much. Even though an unexpected death started it all the day really is filled with happiness, with life!  Smiles abound on the greens and in the clubhouse.  Stories and laughs go back and forth every which way.  Photos are snapped.  Kids wiz around on golf carts with their dads.  New family babies are snuggled and passed around.  Food and drink flow freely.  Goodwill and community spirit is fostered.  Golf is played. 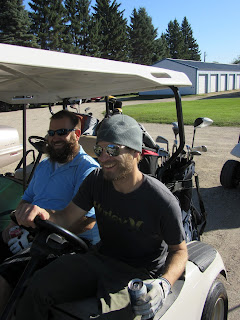 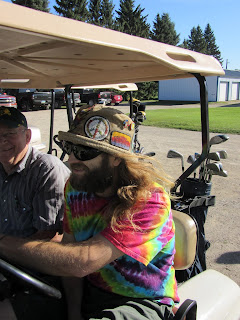 And Beth skulks around in the forest stalking birds.  I don't care to golf, but I do care for the forest surrounding the golf course.  This is the first year the tournament has been held in the fall.  As such, the birding wasn't nearly as good this year--only birds I can see in Montana, nothing flashy and exotic like that Cape May Warbler or the Rose-breasted Grosbeak I saw last time we went. 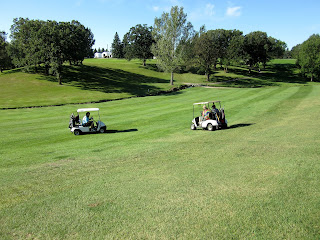 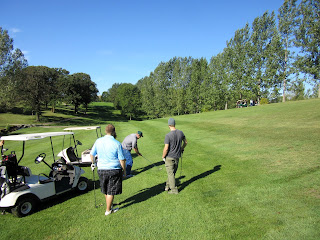 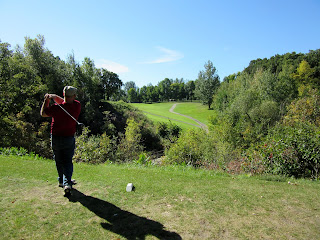 I did scare the crap out of a family friend though, moving quietly in the woods as I were.  I was trying to get to hole 5 where the birding had been tremendous last time.  I couldn't get my bearings in the trees and so was popping out onto the trail to check things out.  As I was making my way out of the brush towards the trail here comes Lynnette in her golf cart.  I thought she saw me coming because she slowed to a stop close by.  She hadn't though.  Not at all.  She was just stopping to light a cigarette thinking she was all alone out on the far end of the course.  When I called out "Hey," as I emerged from the trees she about jumped out of her skin.  She'd been focused on the cigarette and didn't see me at all.  Ooops.  I felt bad for giving her such a shock, but it was also pretty funny, I gotta say. 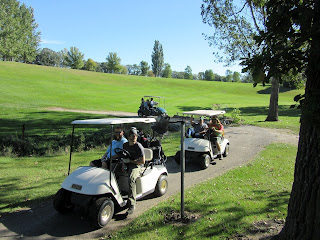 Another thing that was different about the autumn woods was that while there may have been fewer pretty birds there was an absolute abundance of acorns.  Acorns and cockleburs.  The squirrels were busy in the trees--hollering at me when I stopped too near to watch/listen to a Hairy Woodpecker working over a dead tree.  I managed to ruin a pair of leggings with the cockleburs (which to be more accurate were actually a mixture of common cockleburs and these smaller burs similar in shape and size to a watermelon seed).  I was picking them off at first, but after a while I gave up.  They were everywhere!  Everywhere!  Even after spending an hour sitting on a rock in the Clearwater River picking them off my leggings there were still hundreds of them.  The ones I picked off left pointy bits embedded in the fabric.  I really like those leggings though--so I may invest a bit more time in salvaging them from their prickly fate. 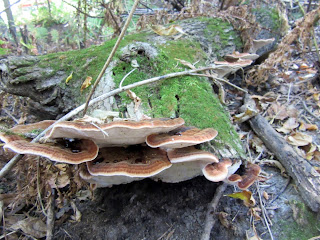 Birding was still quite nice, if not quite what I might have hoped.  There were dozens of Cedar Waxwings gorging themselves on Mountain Ash berries.  There was also several Northern Flickers and Mourning Doves, as well as a Hairy Woodpecker, an Osprey, a Bald Eagle, and a pair of American Goldfinches. (Super exciting aside:  We saw four bears from the farmyard of Matt's grandma's place.  I saw the four shapes--three smaller and one bigger--running across a fallowed/already harvest field.  They ran in a strange loping, undulating way that made me immediately rule out dogs.  As quickly as the appeared they disappeared into a field of corn.  It was very unexpected and really made up for the lacking birds.) 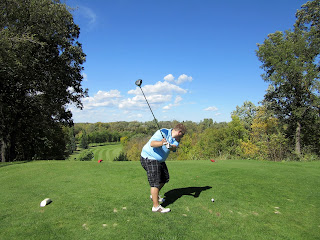 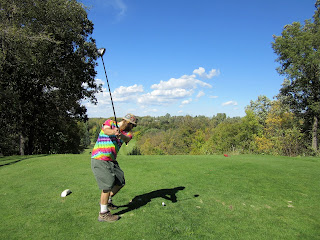 They are quite a bunch, those Minnesota relations of mine.  Generous and funny.  Coarse and down-to-earth.  Smart and sassy.  Talented and strange.  Profane and kind.  Sarcastic and playful.  Skillful and open.  And fun.  SO much fun. 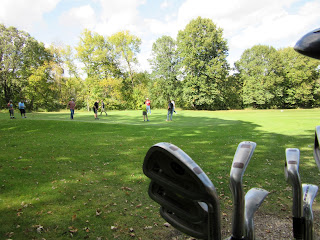 We don't get to see them often enough, but oh, when we do....its quite a time. 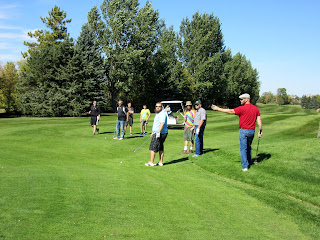 Team Roger-Matt-Adam-and-Ryan scored four under par, which they were pleased with.  They also won some money in the random prize drawings.  Matt won the 50/50 drawing, too. 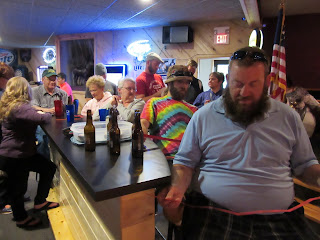 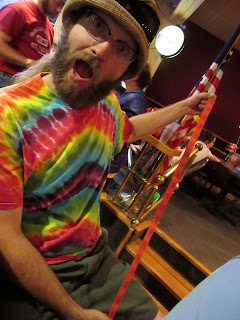 Since it was Matt's birthday the whole group at the bar after the tournament sang to him, to his slight embarrassment, I think.  We had cupcakes and opened presents.  He spent the whole day with his family, reconnecting with cousins he hadn't see in a decade or more, and enjoying the sunshine.  I think its safe to say he had a good day. I think it is equally safe to say it was a fantastic trip all around. 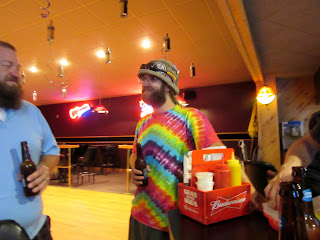 Plus, nothing makes a long drive pass faster than good company--and good tunes.  I was absolutely thrilled to roadtrip with my "brothers."  It was awesome.  Well, the drive back home might have been a little less than awesome, but still, totally worthwhile. 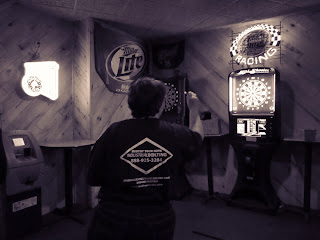 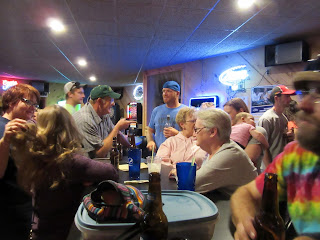 A short time with family is better than none at all. 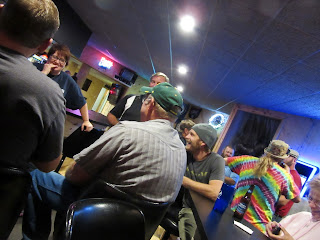