Board Games Rock My World...and Are On My Mind.

Today I was thinking about how awesome board games are.  It isn't anything deep, but something I hold dear none the less. 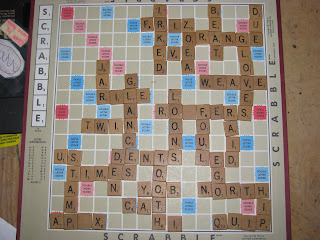 Board games are underrated and underutilized in my opinion.  It seems that so many (at least of my peers and younger) are just not interested in gaming, unless I am taking about video games that is.  Not me, I am a board game junkie.  I'd probably play one every single day if I had willing participants.  (Matt and I DO probably play a game, oh, every other day or so as it is.)  I used to play video games, and certainly they can be fun, but for me it is board games all the way.  I think they are the bee's knees because it is such a fun, inexpensive, and stimulating group activity.  (And hey, no electricity required!) 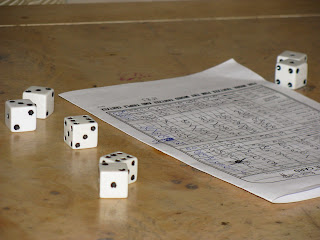 I probably have too many games.  The closet keeps getting fuller and fuller.  Each time we are at the thrift store I have to peruse the games thoroughly.  However, unlike with my bookshelf, I have never embraced a one-in-one-out policy for board games.   It is such cheap and easy entertainment though so I don't feel to bad about it....until I can't get the closet to close again....then I select a few to return back to the thrift store until some new owners come along.


I have found many a treasure of secondhand games.  In fact, I believe we have only bought one new game ever, though I have received several new games as gifts from those who know me well.  So, most are the old, classically awesome versions, rather than the new and (not) improved versions being sold today.  I found copies of both Careers and Bargain Hunter, which I played countless, countless times with my sisters as a young girl, at the MRM.  These are such odd ball 70's games that I figured I'd never see them again.  Ah, bless the second hand shops.  It makes me feel warm and fuzzy to play them now as they are tied to such sweet memories of my sisters and childhood.

Matt, and our dear friend Derek are my go-to gaming pals.  For a while there (a couple years ago now) the three of us had Risk matches every single week.  I should take this moment to brag that despite my peace-lovin' appearance I am the master of global domination in Risk form and was undefeated for some time.  : )  We've been talking about getting a Risk match organized for the last couple of weekends, but it hasn't happened just yet.  The three of us still play games pretty regularly, but have learned to vary the game played a bit more than we used to.  We are now getting into card games as well.  Derek taught us Nerd (strikingly similar to a game called Demon by my extended family) and I taught him Cribbage.  We also have been playing a card game called Golf.  I don't play real golf, but card golf is pretty darn fun.  Matt and I were thinking that cards are the prefect backpacking game because they can be played in so many different ways.

I also enjoy that board games are educational fun.  Yahtzee (and Matt) has been helping me work on my math skills which are pretty darn pathetic.  I really want to be better at math.  It would be a helpful skill.  It makes me feel dumb sometimes to trip up over what I know should be simple mental math.  I am mental math challenged.  But, I really think Yahtzee is helping and the last time we played The Farming Game I even volunteered to be banker, though Matt was certainly still the assistant banker.  : )


What is your favorite board or card game?  Maybe it isn't on my radar, but should be.


The On My Mind concept come from  Rhonda on her Down to Earth blog.  Won't you join in on the fun?!
By BLD in MT