I just adore birds.  I can't get enough of them.  They fill my heart with happiness and joy just to behold them.  I started bird watching a few summers ago and the more I learn about them the more I admire and respect them.  Like all of nature, the birds are marvels often beyond my comprehension. 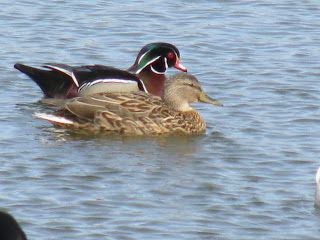 My friend Casey and I took a nice stroll down at Riverfront Park over the weekend.  I snapped a few photos of a wood duck and its female mallard duck companion.  It struck me that they were a mating pair.  The grass was dotted with pairs of male and female mallards.  I don't know if these two are just "color blind" to the differences of the other or if I am interpreting things wrong.  Mallards and Wood Ducks have fairly different breeding habits so I wonder how successful they would be. 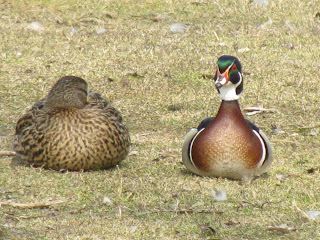 Fun fact about wood ducks #1:  They have clawed feet unlike other ducks because they perch and nest in trees. 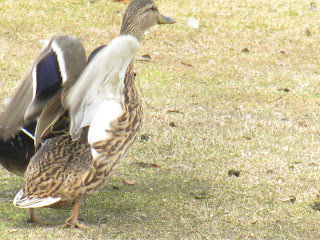 This female mallard has something to flap about!  She has found herself the best looking male at the park! 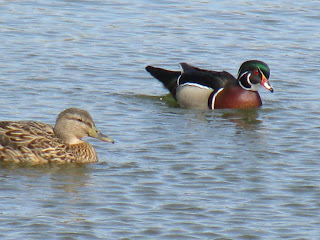 Fun fact about wood ducks #2: These beauties were almost hunted to extinction in the late 19th century and early 20th century.  They are now considered stable once again following a ban on hunting them from 1918-1941. 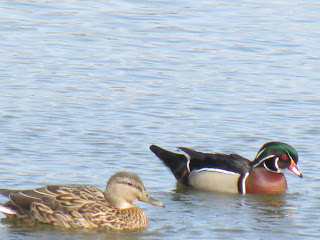 Fun fact about wood ducks #3:  They nest in tree hollows any where from 2 - 60 feet above ground, the higher hollows being preferred. 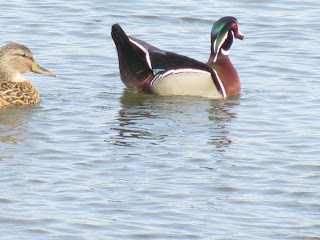 Fun fact about wood ducks #4:  After hatching, wood ducklings leap from the safety of their high nests following the sound of their mother's call.  They have been recorded jumping up to 290 feet without injury. 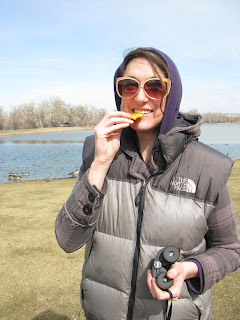 I love Casey.  She is so fun to be with!  She moved several hours away for school so I don't see her as much any more, but for a good reason.  It was her spring break so it was nice that the weather cooperated just long enough for us to enjoy the sunshine.  I mean really, what is Spring Break without sunshine?!?! 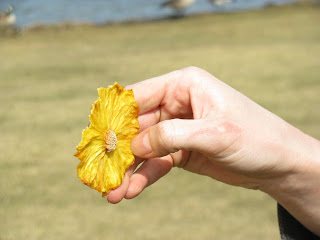 Casey brought along a bag full of fruit to snack on and I think I managed to take care of it almost all by myself.  I had never had a dried pinapple before.  It was super tasty and looked like a flower to boot!
By BLD in MT