I've read that once something happens it is more likely to happen again.  It was in one of Masuru Emoto's books about water crystals.  He said that at one point it was commonly known that glycerin didn't crystallize...until one barrel did during transport.  Not so long after it that happened again.  And then again.  And then again.  It caused quite a stir.  Now it is commonly known that glycerin crystallizes.  It didn't used to, but now it does.  Or so I read.  So maybe this isn't all that surprising, but we managed to use all eight triple word scores again--a mere two weeks after it happened the first time.  I'm so blessed that it doesn't take much to make my day. 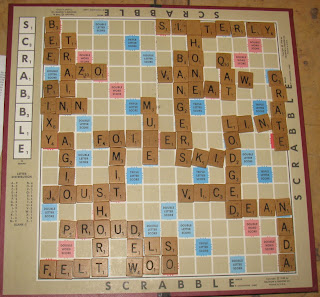