A Honk for a Leaf Mouse

"Just stopped and honked at a leaf in the road thinking it was a mouse, then laughed for about 10 minutes. Guess who's going to bed early tonight?"

Oh, how I laughed to think of it.  I can totally visualize it.  And oh how I admired that he would try and stop for a wee little mouse in the road.  He's so kind.  It was both a very hilarious and very touching story, I thought.  And so I was immediately (and I mean immediately) inspired to make and send him a leaf-mouse postcard.  So I sketched one up and colored it in and dropped it in the mail.  I feel confidant it should have arrived with him by now so I had to share. 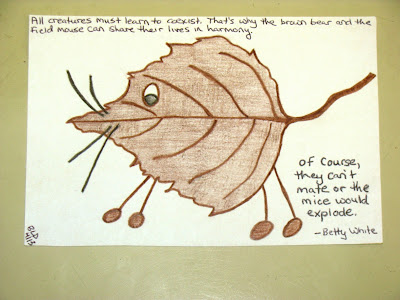 I was torn between the Desmond Tutu quote, "If you are neutral in situations of injustice, you have chosen the side of the oppressor. If an elephant has its foot on the tail of a mouse and you say that you are neutral, the mouse will not appreciate your neutrality," and the Betty White quote which I ended up choosing.  I think both would have been perfect for Chantz, but in the end I went light-hearted and humorous.

I was pretty pleased with how it turned out and had a really fun time while making it.  And I just hope Chantz found it as amusing as I did.
By BLD in MT