Let me tell you about an insane (and awesome) hike we took two weeks ago.

I don't normally take hikes that make me "face my fears."  There are so many lovely strolls in the woods and flower filled meadows that do not fill me with panic or apprehension so why would I?  Matt and I were actually both just shaking our heads about a recent headline we saw in Backpacker that was something along the lines of The Scariest Hikes in America.  We laughed, "Are there people who want scary hikes?!"  I guess I am just not that much of a thrill junkie.  Thankfully, neither is Matt.

But, all that said, face my fears I did when we hiked up to an incredible, mind-blowing stand of petrified trees in Yellowstone National Park.  Twice I faced my fears, in fact.  Twice.

The first time was immediately after we arrived at the nearly unmarked trailhead about four miles east of Tower Junction on the NE Entrance Road.  A smallish herd of bison with calves was right smack in the middle of the trail which we were hoping to take.  I, personally, am as intimidated by the prospect of irritating a bison as I am a bear.  They are huge and run three times as fast as I do!  Thus, I was almost ready to find a different trail right then and there, I mean, there are lots of trails to choose from....but I really wanted to see those trees!  We'd been planning on it for weeks.  Also, there is a chance you'll cross paths with a bison on most of the YNP trails so its not necessarily like I'd be safer elsewhere.  I mean, there was lots of evidence they used the Beaver Ponds Trail we took a few weeks back.  So, we decided to proceed--with caution.

We scouted the terrain a bit in the binoculars and realized we could see the (insanely steep) trail leading up the mountain over the hills and the meadow wherein the bison were grazing.  By keeping that trail in sight we could skirt the bison a safe distance and rejoin the trail further on.  I have to say, my heart was pounding even though we were hundreds of yards away from them.  I felt exposed out there in the open with nothing between those massive, wonderful bison and my small, soft little body.  But, they just kept grazing and paid us no mind whatsoever--a very good sign that we were indeed a safe distance.  If the animal had stopped grazing to watch us I would have probably turned around.  But they didn't.  Fear #1 down. 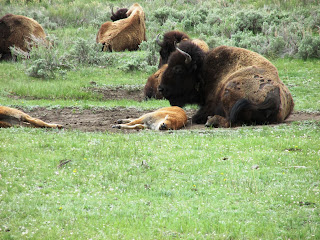 I also don't tend to take wickedly steep hikes.  I like a good mountain challenge of ups and downs, but its not my dream-hike when I feel more like I should be crawling on all fours because of the steepness. 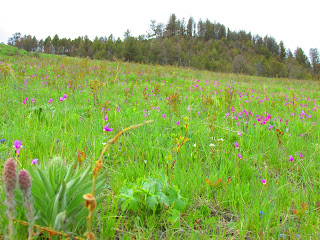 But, this petrified tree hike was just exactly that steep.  Insanely steep.  Like it was a joke it was so steep.  No switchbacks...just straight up the side of a mountain.   I can't even being to describe it.  It made us laugh (and pant and sweat and stop for frequent breaks).  Steep, steep, STEEP.  Crazy steep.  Matt and I both agree that it was the steepest trail we'd ever taken.    It was only a mile and half or two in distance, but it gained around 1,200 feet in elevation in that short time.  Intense.

We were pretty much expecting it though.  Our guidebook, written by former rangers, repeated over and over about how steep it was.  We figured if Rangers think its steep it must be really steep.  And it was.  They were not kidding when they listed the hike as "strenuous." 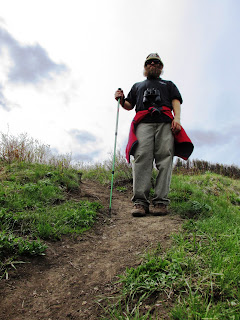 I will say though that the steepness of the trail made it quite easy to enjoy all the wildflowers.  The angle of the trail made them much closer to face level than nice, flat ground would have been.  And they were everywhere in stunning shades and variety.  It was breath-taking.
Like I said, it wasn't a long hike at all, but the steepness more than made up for that.  So we were pleased when we reached what we thought was the top as we spotted our first petrified tree stump still upright in the ground. 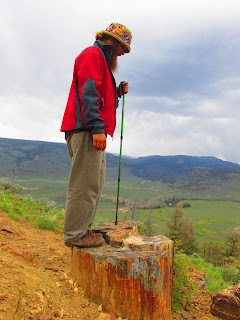 Then we were on an exposed rock outcropping that was dotted with downed petrified trees.  There were two other people on the outcropping who would turn out to be the only two people we saw the whole afternoon.  We stopped to rest, have a granola bar, and enjoy the view.  But, we knew we weren't done yet because we couldn't see any freestanding petrified trees, only downed ones.  So we got out the guide book and realized we still had a ways to go...further up, up, up.
Passing between the small forest and the rock outcropping was more trail with we followed to the ridge visible behind Matt in the photo above.  As we crested the rise there it was.  The petrified redwood tree a full 26 feet in circumference frozen in time on top of a mountain.  Imagine a time when redwoods (not to mention magnolia, dogwood, avocado, and olive trees) grew in Wyoming!!  Unreal. 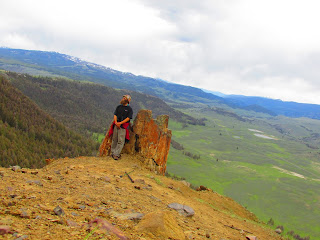 Having been to the living redwoods of California made this all the more impressive to me, I think.  That seeming rainforest is worlds apart from the exposed mountaintop 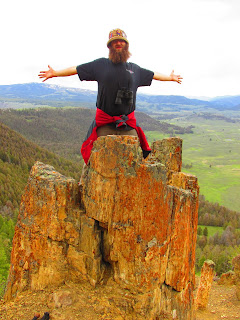 There were many other petrified trees around the big redwood, too.  Including a few beauties down the rocky hillside from the redwood that also stood in the very same place they had 50 million years ago when a volcano started the process of preservation that would transform them into stone. 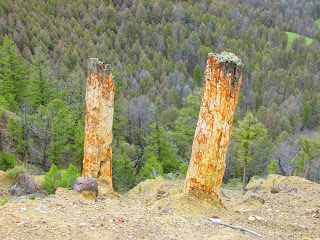 So we sat in the big tree for a while overlooking this massive and astounding valley below us--including observing the traffic we were so gratefully far away from. 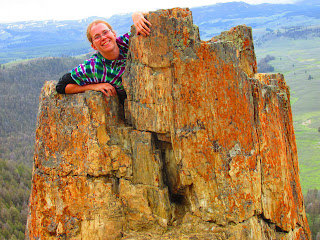 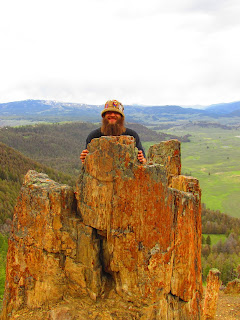 We went down the hillside until we were beneath it looking up at the massive thing perched right on the edge, petrified roots running through the soil and rocks beneath.  Fascinating. 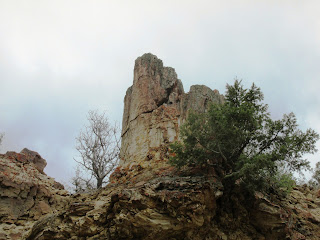 Matt wanted to climb down to the other two nearest the redwood which were some 30-50 feet down the rock-strewn hillside.  I, myself, was not so sure I did.  I felt shaky and almost dizzy from the heady experience of sitting right on the edge of the world.  The rocky soil seemed unstable.  This wouldn't have been a problem but for the fact I was also feeling unstable.  My hands shook.  My legs felt like jello--from the exertion of the hike or the thrilling/terrifying experience of being on that rock ledge I was not sure. 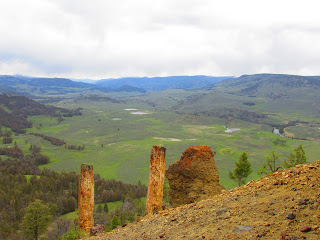 I told him to go ahead and that I'd take his photos from where I already was.  "The view looks good from here.  I don't think I want to go further down that loose, rocky hillside.  You go ahead." 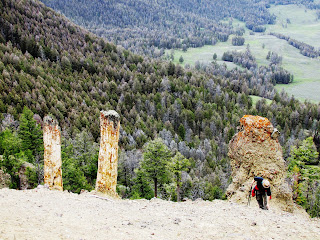 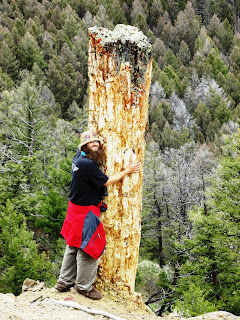 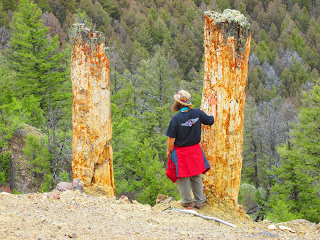 But then when he got down there he was making so many exclamations of amazement that I thought perhaps I might muster my courage and slowly, oh so slowly, join him down there.  And I did.  I used hands and feet and with four points of connection it was not so terrifying as I thought it might be.  The rock formations and petrified roots of these trees were certainly worth it.  Fear #2 down.
I did cling to that first tree when I finally got there and cried just a little bit.  It was an emotionally charged moment between the age and power of the physical place, the fear which I'd overcome, and the beauty of the forest, mountains, and meadows spread out below me in such splendor. 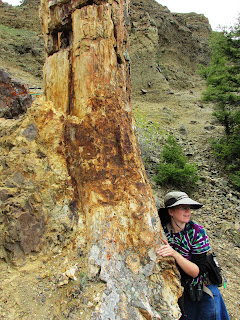 I am so glad to have made the decision to climb down to them.  The petrified roots of these two trees were even more lovely and impressive than those preserved on the big redwood.  I sat on a petrified stump and looked out at all the glory of this world.  I felt so alive.  I overflowed with energy. 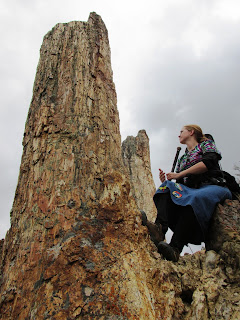 We looked over the lush and gorgeous landscape, hugged the old trees, admired their roots and wood grain,  drank much needed water, and spoke together about time, humanity, and life.  All too soon we decided the clouds that had been building all morning looked like they might threaten with an afternoon thunderstorm.  We didn't really want to be out on that ridgeline when that happened and so we started back. 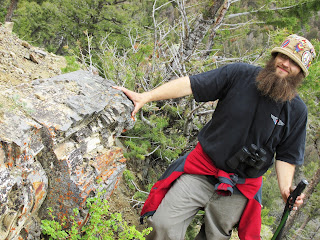 We took a slightly different path back which routed us past even more petrified trees we'd missed on the way up.  They seem to dot the entire mountainside.  There are a number of trails and we'd been confused as to which was the one the guidebook wanted us to follow.  As it turns out they seem to all be insanely steep and they all lead to the top, to the trees. 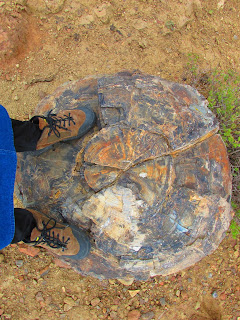 Going down the mountain was easier, but that is not to say easy as it was still very, very steep and one had to go slow lest risk taking a tumble.  The views were epic though and the whole hike astonishing and humbling--more than memorable, for sure.  To sit in a tree turned to stone overlooking the glory of creation is an experience that will never be forgotten.

And we weren't nearly as tired or sore as we might have expected the next day either!
By BLD in MT