If you've been reading here for a while its probably no secret that we're not the biggest fans of plastic.  We've reduced and eliminated a lot of plastic in our life by shopping in bulk, not using disposable plastic items like garbage bags, shopping bags, and tableware, using glass jars for food storage both in the fridge, pantry, and lunchbox, etc.  Its something we've been consciously trying to reduce over the years and I think we've been pretty successful at it, too.  As something breaks or runs out we replace it with a non-plastic alternative.  So while the book didn't make him shudder at the thought of ever using any plastics again it did make him change one more simple thing at our house--the plastic shower curtain. 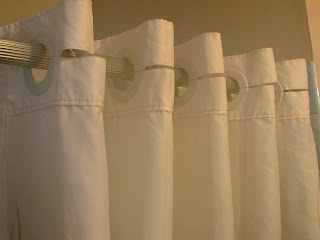 As is my understanding of things, plastics have greater and greater potential to be toxic as they are "enhanced" to become more pliable in the process of being made into commercial goods.  Generally, the more pliable the plastic (think raincoats, shower curtains, and IV bags) the more potential for toxicity.  They just have more junk added to them to make them do what the manufacturers want.

Also, the more exposure to heat the plastic has the greater the potential it has for toxicity, in general.

For the record, I feel that not all plastics are created equal and I realize that there can be reasonable applications for some use of plastics.  It only becomes a health, financial, and environmental problem when we use plastics willy-nilly in everything!

So, after reading the book Matt wanted to get a cloth shower curtain.  Our plastic shower curtain, exposed regularly to heat and water, could be off-gassing some serious stuff.  Stuff we don't want to breath and absorb through our skin while showering.  Really he wanted glass sliding shower doors, but the cloth shower curtain was only a couple bucks at the thrift shop so that was a more reasonable alternative for us.

I was concerned about whether it would allow water to leak out through the fabric while we showered.  I've seen cloth shower curtain liners sold in the store.  But, if we used a plastic liner it would completely defeat our purpose.  That is how we discovered that in all reality a liner is completely unnecessary.

We've been using the cloth curtain for almost a year now without any issues--no leaks, no mold, no problems whatsoever.  It works just like our old plastic one did, only hopefully without the off-gassing.  We actually have even found an added plus in that the cloth curtain can just be tossed in the washer when it need cleaned rather than trying to wipe or spray it down.

It works for us!
By BLD in MT