I am so pleased with my Halloween costume this year.  Frankly, I usually don't do much in the way of dressing up.  I might throw on my old witch's hat to greet trick-o-treaters at the door.  But, oh, not so this year!  This year I went all out and made myself a Little House on the Prairie themed costume. 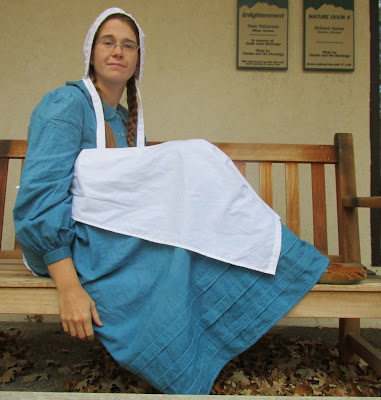 The bulk of it I stitched up at the sewing retreat with my mom a few weeks back.  I ran around in the bonnet quite a bit of the time I was up there.  But it proved to be a bit of an ambitious project for a weekend retreat and so there were a few things I had to finish up on the dress at home.  Like making my first buttonholes.  And hemming and dying the dress--which I'd made in white fabric because it was all I had.

The buttonholes shocked me in how well they came out.  I'd been pretty nervous about them, especially since they are right down the front of the dress--front and center.  But, as it turns out the hook and eye closure at the waist was the one I should have been stressing about.  That was much trickier than I expect.  Go figure that I'd be worrying about the wrong thing.

So far only a couple people have pegged my Laura Ingalls Wilder homage, but the rest have been within the ballpark--a milkmaid, a pilgrim, an Amish girl.  That works for me.

I plan to incorporate the dress into my regular wardrobe after its use in the holiday festivities.  I think without the apron and bonnet it looks like a pretty normal dress.  I mean, maybe not the most modern of fashion, but hey, when have I ever been on the cutting edge of fashion!?!  I am so pleased with the dusky color of blue.  I adjusted the levels of dye several times until it was juuuuuuuust right--not bright like the sky, not dark like cobalt, but, right in the dusky middle.

It also probably goes without saying that the apron will get normal, every day use in the kitchen after Halloween, too. 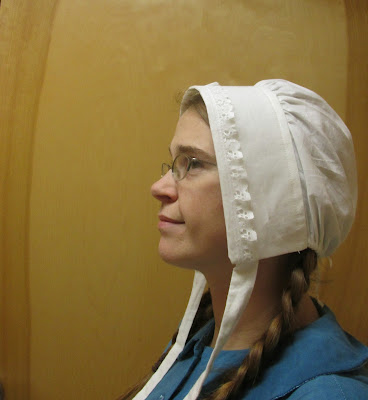 The bonnet....well, gosh I adore a bonnet.  But, as much as I find them beautiful and charming I just don't think I can pull that off in my every day, modern life.  But, you can bet that I am pretty over-the-top enthused about wearing it all day today without anyone batting an eye.

I even made the shoes--little leather slippers I sewed from a kit more than a decade ago with my sister, Lisa.

I've always liked Halloween because I always liked to play "dress up."  And I am sure having LOTS of fun playing dress up today! 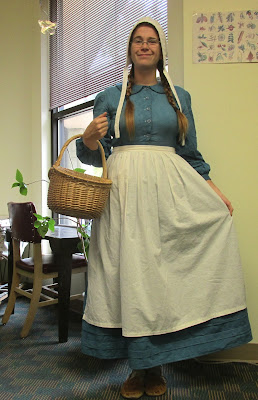 So, a very safe and happy Halloween to all of you from my Little House on the (Montana) Prairie!
By BLD in MT