Our 7th day in the park would be our last day of hiking.  We wanted to do something, well, awesome, with our last day.  Matt and I had asked the Ranger and some of our fellow hikers on the Grinnell Glacier hike for suggestions as to what we should do on the west side of the park.  They all said to take the Highline Trail along the west face of the Continental Divide.  And so we did.
So, on the last hiking day, we drove back to Logan Pass and took off on foot from the trailhead.  This hike would be the longest we'd take during our Glacier visit at 11.6 miles one-way.  However, because of the superbly awesome (and free) shuttle system in the park we would not have to hike back, but could catch a ride instead.  (Yes, a free shuttle!  How cool is that?!)  The hike also passes through some supremely beautiful, expansive country as it follows the Garden Wall.  We were sure it would not disappoint.
The hike starts out among some twisted, short evergreen trees called krummholz which is German for "crooked wood."  Because of their high altitude and the extremes of winter winds, snows, and ice the trees grow in a strange gnarly fashion.  In just a short while though the trail is suddenly on an sheer rock face.  There is a cable mounted on the side of the cliff wall to hold onto as the drop off is quite intense.  I didn't find this part of the hike frightening though--despite being on the cliff edge.  The trail was wide enough and there was the added security blanket of having a cable to hold to.  The view down was amazing.  Going-to-the-Sun Road was right beneath us! 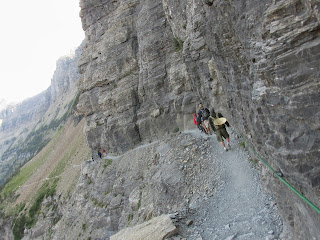 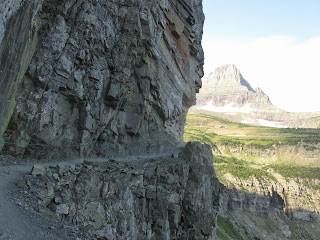 Leaving the cliff behind we continued on in the shadow of the Garden Wall, ultimately crossing into more open country.  Here the Highline Trail would reward us with a bounty of huckleberries.  We'd not seen any since the few we ate the very first day.  Just off trail though was a huge patch of them.  We found an empty ziplock bag in our first aid kit and happily picked for about 30 minutes until it was mostly full.  Naturally we also ate our fill as we picked.  It seemed to me I couldn't get them in my mouth fast enough.  Those berries are so scrumptious and juicy.   So yummy.  It was shocking to us how many people passed by the patch without stopping to sample any!  We also startled one group of hikers who at first glace perceived us to be bears rustling around in the bushes and tall grass. 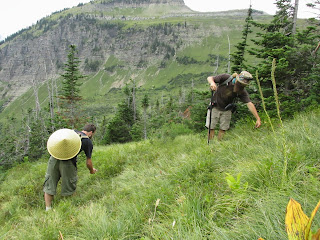 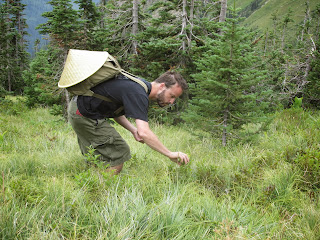 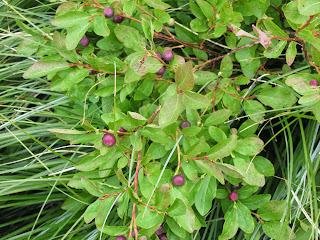 With purple stained fingers and happy taste buds we again hit the trail.  Along the way we'd spot a lone mountain goat, another hoary marmot, and a Townsend's solitaire.  We passed through lovely alpine meadows and fields of multi-hued rocks. 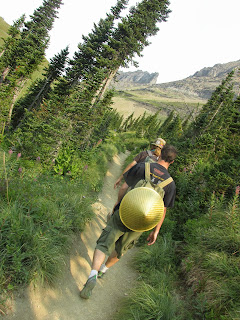 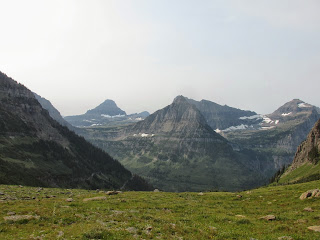 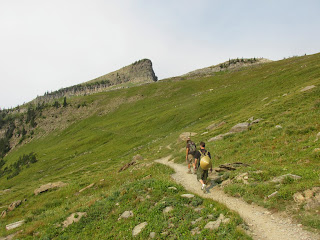 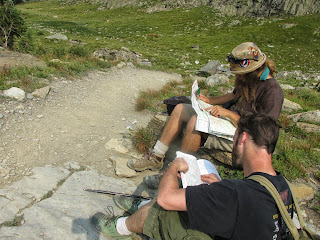 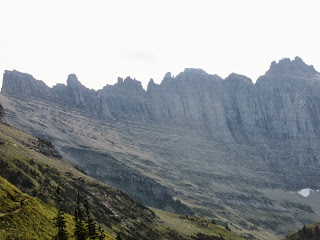 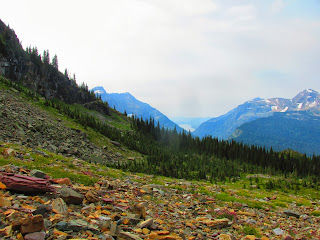 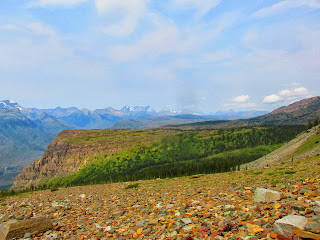 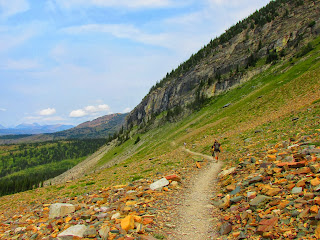 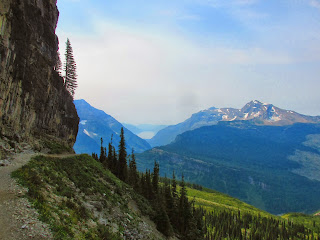 We'd read about a spur trail to the Grinnell Glacier Overlook which branched off the main trail just before the seven mile mark.  Since Matt and I had hiked to and seen the same glacier from the bottom we thought it would be pretty neat to see it from another vantage point--looking down upon it.  Also, since Kjell wasn't with us when we did the Grinnell Glacier hike this would provide him an opportunity to see the glacier in all its wonder.  I am definitely glad we did the spur, but oh boy, was it intense.

First of all the spur trail was steep.  Absurdly steep.  Something like 1,500 feet elevation gain in 1/2 mile.  We had to stop and catch our breath every thirty feet, it seemed.  We played a sort of hiking leapfrog on the trail with a foreign couple as we each stopped to drink water, take in the view, and slow our panting in turn.

It was also steep in another way, too.  The trail was on a steep mountainside meaning there was nothing off the side of the trail but nearly vertical rock scree.  A fall would have meant a long, rocky tumble.  I was very careful where I placed each step.
As we plodded up the trail I proclaimed that when we finally got up there I was going to stay up there for three hours!  But, once we finally got to the top I had to change my tune.  It was so high and so steep as I looked down upon Grinnell and Salamander Glaciers.  It made my head swim.  Let me tell you, a swimming head is not really all that comfortable when you're sitting on a ledge so high up there.  I cracked Matt up by holding on to the stone wall we were leaning against as I ate my sandwich and huckleberries.  I'd never been so simultaneously struck by astounding beauty and nauseating discomfort.

The foreign couple we'd been leapfrogging with along the trail also made it to the top and the woman was obviously as uncomfortable as I was.  Her partner wanted to walk out further and take photos and she passionately protested his taking one single step further.  Finally he said "I'll only go out until you're nervous," to which she replied, "I'm already nervous!"  I think this woman and I were on the same page.
The view was amazing though.  I have to give the crazy overlook that much.  The distant mountains covered with snow and ice.  The opaque, milky blue glacial lake below us.  The grandeur of the glaciers so close to where we sat.  To think that Matt and I had been down in that very valley and now sat up above it was pretty remarkable.  We'd seen people at the overlook when we'd been down at the lake shore.   They'd seemed so terribly small up there.  And now we were them.  We were, essentially, sitting on the Continental Divide.  It was pretty humbling and awesome.

In the end, I bet we were only up there for 15 minutes--far less than the three hours I declared we would before we got all the way up there.  Going down was a relief--the swirling in my head subsided--but still took a good deal of concentration lest we slip on the rocky trail as we descended.  It was strange to be able to see so far down the steep mountainside in my peripheral vision as I watched the trail and each step I took. 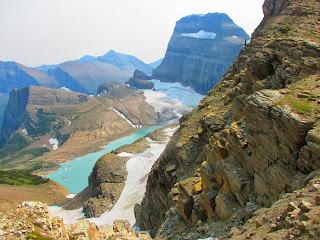 Matt would have stayed up there for three hours, I'd bet.  I am not sure about Kjell.  While he was decidedly keeping his cool better than I was I think he was more than ready to go back down the trail when the suggestion came up.   Matt laughed when he said "I could have stayed up there all day," to which I replied, "I could have thrown up."   In the end I am very, very glad to have gone and wished I could have wanted to enjoy the view longer, but it is what it is.  My head was spinning and there wasn't much I could do about it.  I'd do it again, I think.  Matt definitely would.  He wants to take his brother, Adam. 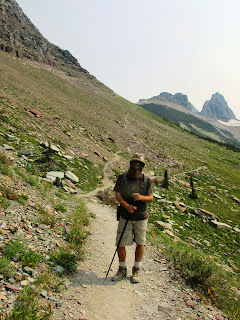 When we returned to the Highline Trail it became clearer and clearer how crazy steep that spur trail was the further we got from it.  It was wild to look back down the trail and see the spur snaking up to the saddle of the mountain. 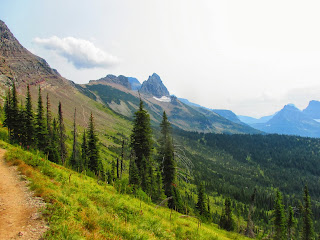 As we entered a more forested part of the trail we caught sight of the Granite Park Chalet--a backcountry hotel, of sorts---off on a distant rise.  This was a landmark on the trail in that from that point on the hike was almost completely downhill.  The chalet would also be a nice spot to stop and rest a while, which we did.  We also walked around the buildings and peeked in the windows of a few vacant rooms.  The accommodations are simple, but Matt and I think we'll have to come back and stay some time.  It would be a wonderful basecamp from which to launch further hikes in the area.  We rested and drank water at a picnic table as we enjoyed the sweeping views.  The view of the crazy spur trail from this higher vantage also confirmed for me just how crazy that trail was.
From the chalet it was down, down, down to The Loop, a hairpin turn on the Going-to-the-Sun road.  We hiked through forested areas which had been burned out by the Trapper Creek Fire in 2003.  It always amazes me how bursting with regrowth and life the forest is after such events.  It was so green.  I spotted the first creeping Oregon grape that I'd seen in the park.

I must confess that I was tired on the downhill portion of the hike.  My arthritis was inflamed and it was the longest of our hikes.  By the time the parking lot was in sight I was more than ready for it.  It was a total treat that the shuttle was ready and waiting in the parking lot at The Loop when we finally arrived.  We just had a few moments to wait before it was ferrying us back to our car in the lot at Logan Pass.  We were tired and, oh, so happy. 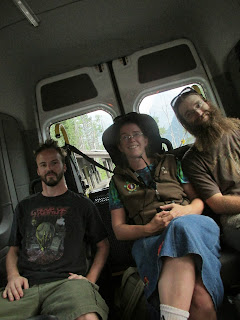 We ate dinner, enjoyed a beer, and made s'mores over the campfire.  Then we retired for one last night of sleep in this magical place.
A most wonderful day.  A most wonderful way to end our Glacier adventures.
By BLD in MT