After our stay in Glacier National Park we planned to make a one night stop in Missoula in order to catch Railroad Earth who were headlining the annual River City Roots Festival.    I don't think we've missed a RCRF in a good number of years. 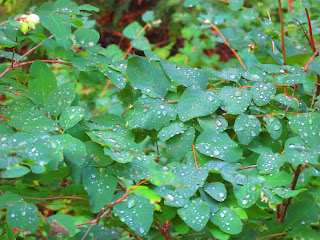 The drive from Glacier to Missoula was quite impressive.  We took a route we'd never driven before and it followed the shoreline of the massive Flathead Lake.  I had no idea how big that lake was, I guess.  It was enormous!  The area is loaded with cherry orchards, too, growing those regionally famous Flathead Cherries.  We stopped at a farmer's market and got ourselves some.  Oh boy, were they tasty.  So juicy and red!  I could probably eat myself sick on them.  But, we just bought a little bag so all was well.
When we got to Missoula we discovered our friend, Sean's, bluegrass band was playing before Railroad Earth in a little bar down the street from the festival.   The band moved up to Missoula not long ago.  We miss seeing them play regularly around town so it was a real nice surprise that we got to see them as we were passing through town.
In addition to catching a bonus bluegrass set we also took a ride on an astounding carousel.  Each horse is unique and ornately carved--all of it done by hand.  Learn more about the history and work that went behind it here. 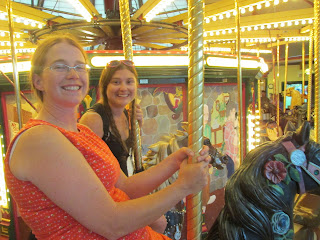 Hannah is riding Koko, I am riding Sweet Sue, and Matt is riding Prairie Rose.  Matt really wanted to ride a dragon, but there was some reason he didn't that escapes me now.  Maybe they didn't go up and down like the horse.  Or maybe it was a size limit thing.   I don't remember.  I also don't remember the last time I rode a carousel.  Probably in my youth at the county fair.
We are just big kids at heart--a fact that makes me happy.  When Hannah suggested a ride it took no convincing on our part.  In the video above you can see Matt's big beaming smile and hear Hannah's gleeful peals of laughter.  I think one is never too old to play.  I think that keeps a person young. 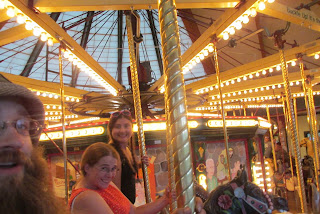 After the spin around the carousel--which went really, really fast as it spun, I might add--we walked back up the hill to the main stage to take in some Railroad Earth.  That band fills me up with warmth.  They started with Seven Story Mountain and since we'd just been traipsing about on the mountains it seemed quite fitting.  Actually, other than perhaps their namesake tune they played nearly all of my favorites.  I didn't see any tapers at the show so I am not sure it lives on anywhere except in memory.  That makes it simultaneously more special and just a bit sad for me since almost all the concerts I see are recorded and shared (all legally) allowing me to relive the good times and good tunes all over again and again. 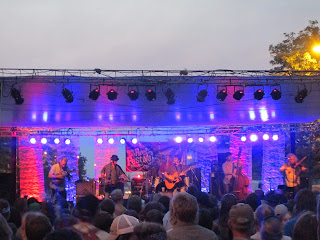 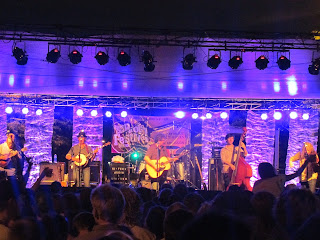 Hannah, Matt, and I meandered back to Hannah's place after the show in the cool of autumn night oh so happy.  And ready to go home.

And THAT is how my Glacier trip ended.  It was a cherry on top of an already unbelievably good sundae.
By BLD in MT