The Telephone-Drawing Game is what would happen if Pictionary was crossed with the party game Telephone.  You know, the game where you whisper a phrase into your neighbor's ear who passes the message on down the line to the last person playing--usually with amusing distortions of the phrase as it passes from mouth to ear to mouth to ear.  I always liked both games a lot so imagine my delight at a game that seemingly combines them.
To play The Drawing-Telephone Game you just need a stack of small pieces of paper, a few pencils, and some friends/family.

Give everyone as many pieces of paper as their are players.  Everyone writes a sentence on their top piece of paper--any ol' sentence will do.  At the birthday party where I learned this game one sentence was "Birthday bliss...my name is Jesse!"  Another was "Montana has the most wonderful, loving friends."  They can be adult or child-friendly, depending on the audience.  After everyone has written their sentence they pass the whole stack to their left.  That person reads it, moves the paper with the sentence to the bottom of the stack, and attempts to draw an image of what the sentence said on the next piece of paper.

When they are done with their drawing they hand the stack of papers to the next person who looks at the picture, moves it to the bottom of the stack, and attempts to write one sentence that describes that new drawing.

This is repeated until everyone gets back to their original stack...which can sometimes be tricky to tell depending on how distorted the sentence got during its travels. 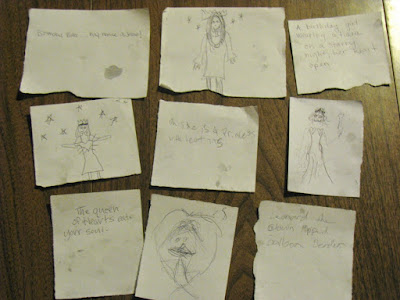 By the time "Birthday bliss...my name is Jesse!" was finished it had morphed into "Leonard the clown lipped balloon bender."

"Montana has the most wonderful, loving friends," became "In Montana there are stick people in love," which ultimately become a "happy heart," that radiated like the sun. 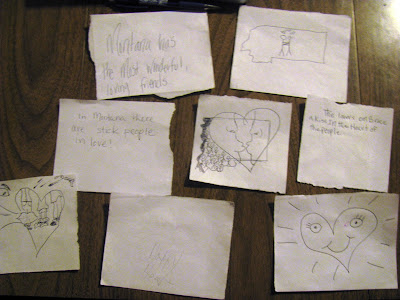 Its funny how wildly different the messages became in most cases.  But, there were also a great deal that stayed pretty much within the same theme as the original sentence.   It was a really fun, simple, low-tech game.  I've since taught it to several groups of people always with similar hilarious result.
By BLD in MT