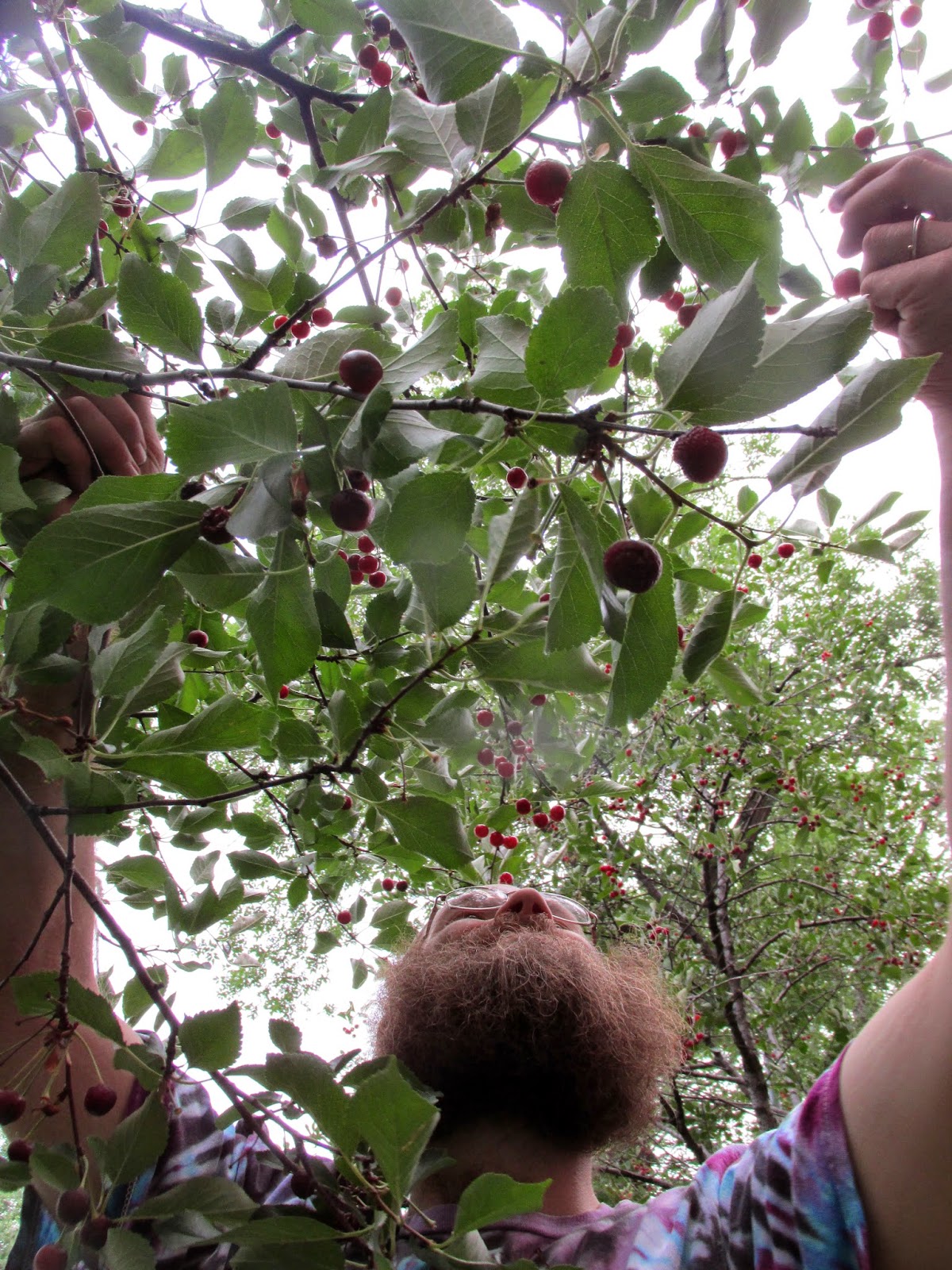 We went cherry picking yesterday.  It was a perfect day for it, too.  The sky was overcast and it had rained a bit in the afternoon so it was cool and shady as we picked.  Frankly, I think we're a little behind schedule.  Many of the cherries were already overripe.  But, we still picked a good quarter bushel, maybe a little more.  We pit and freeze the cherries for smoothies.  We also make juice from them, mostly for making cherry jelly.  I like to eat them while I pick, but Matt finds them unpalatably sour.  Two other groups of folks were out picking--an elderly couple and a lone woman about our age.  I'm glad to see other people capitalizing on this free fruit opportunity, too.  As is the case every year we had several people stop and query us as to what we were up to, what fruit we were picking.  It seems funny that people don't recognize them as cherries, but hey, ten years ago I probably would have walked by without even noticing them at all. 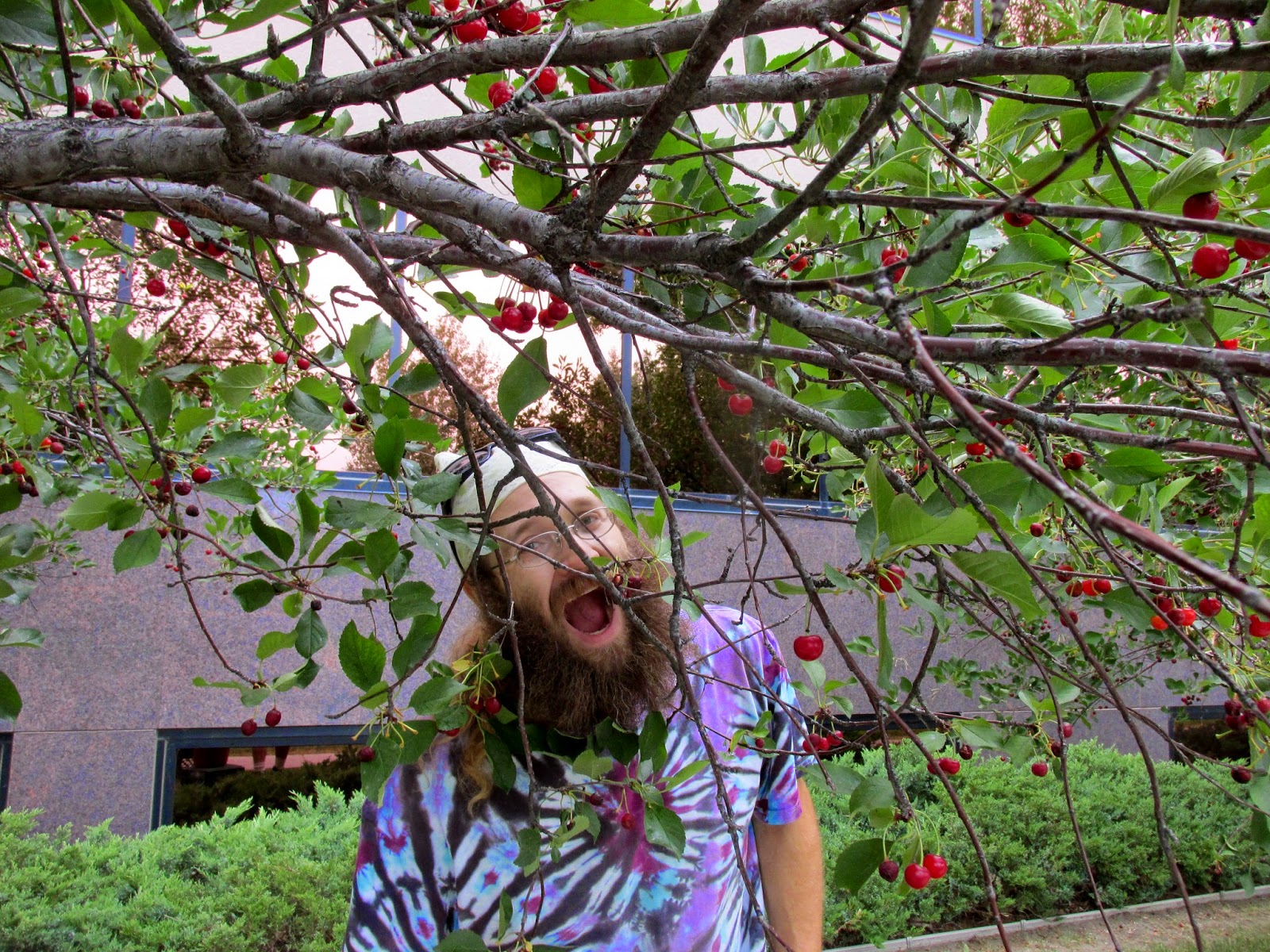 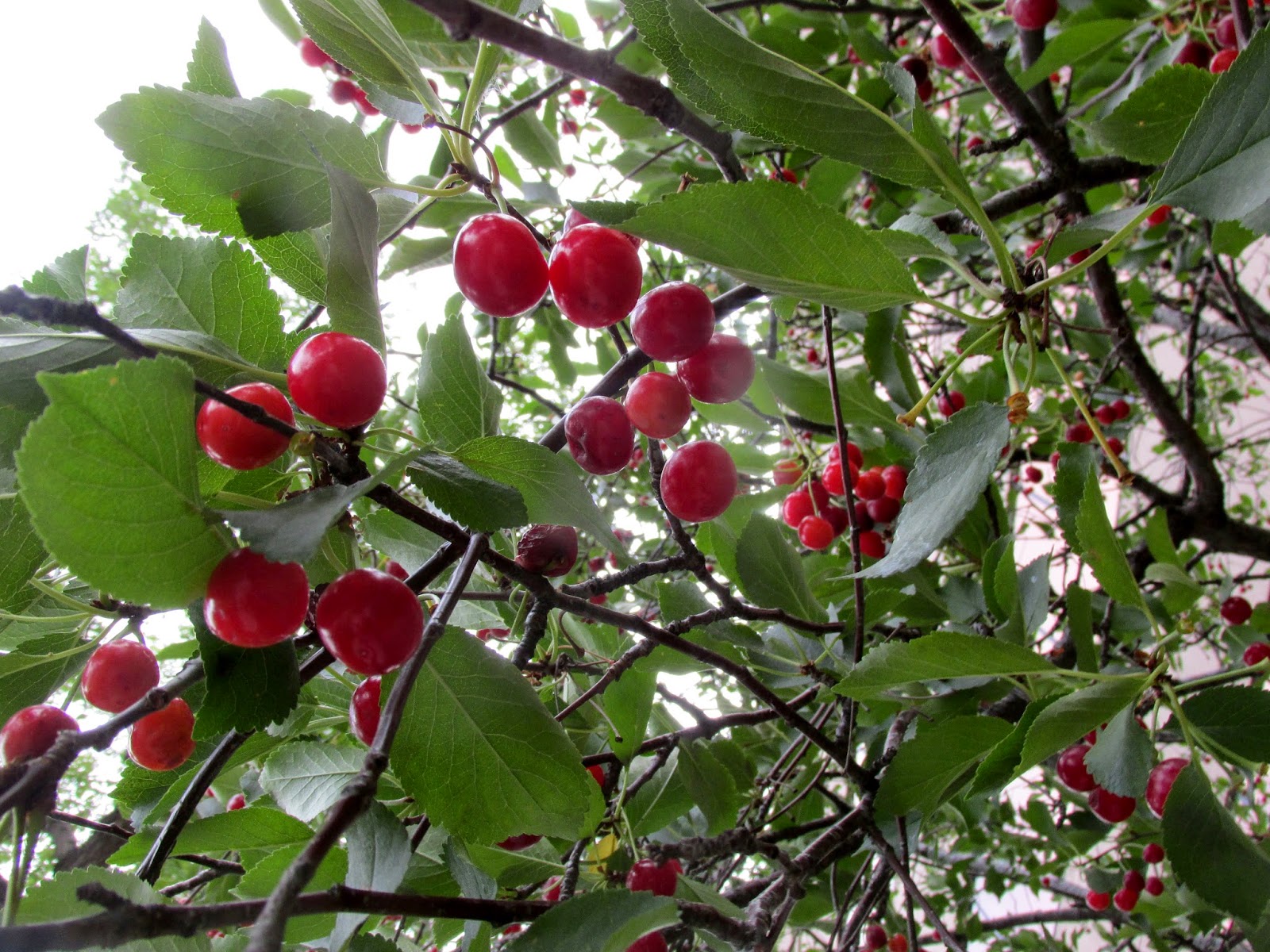 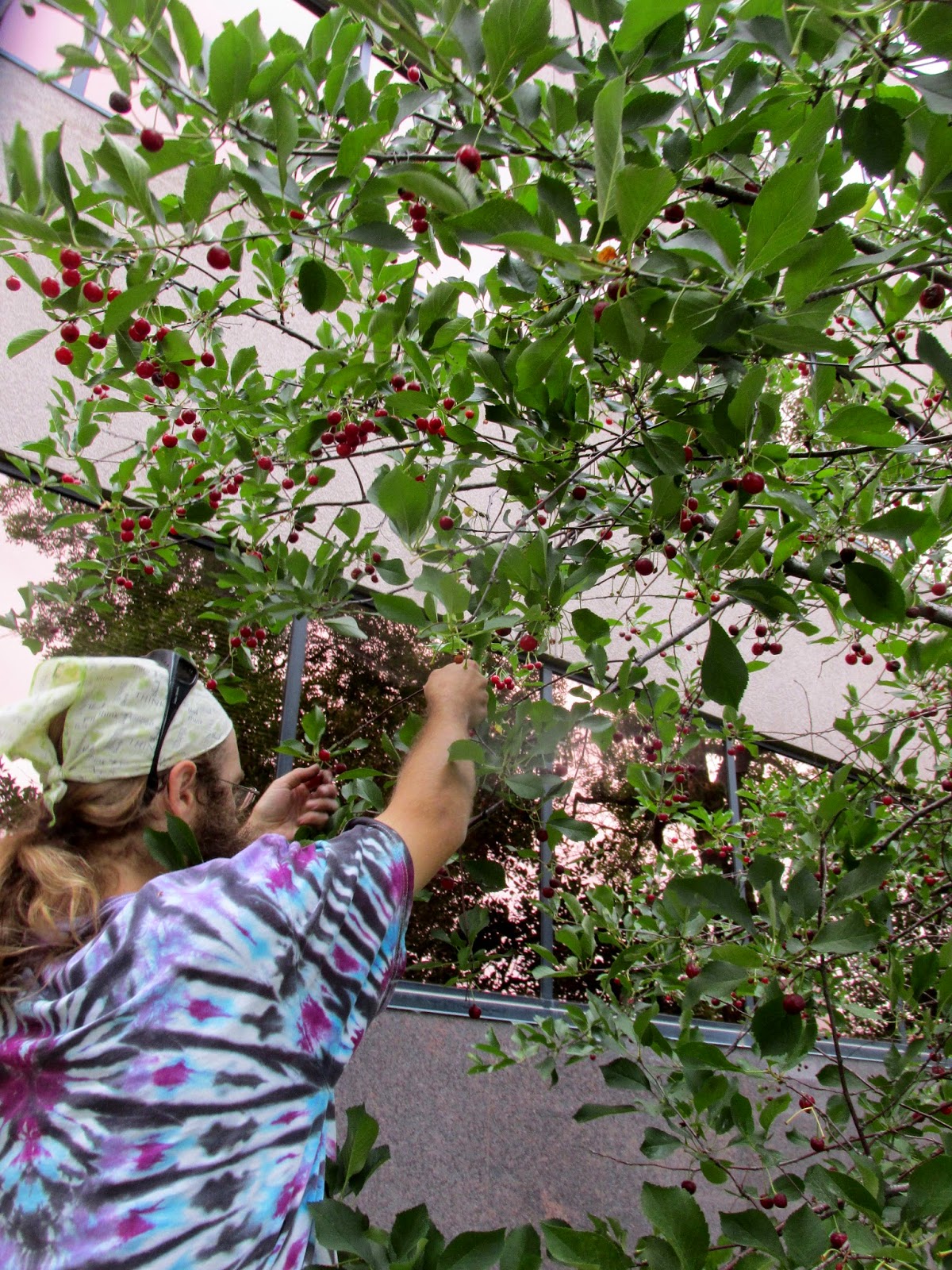 While we were off cherry picking our new slow cooker (a wedding present from my aunt and uncle) was at home doing its thing.  As such, we returned to a house adrift in the savory smells of Indian spiced lentil soup.  Gosh, I could get used to just having dinner ready for me when I get home!  Though we've only used it a few times so far I already think this slow cooker is going to be my new best friend in the kitchen.

And then Matt surprised me with a bottle of framboise lambic and a new season of The Simpsons (bought second hand at a pawnshop because he knows I'd never approve of paying the asking price for a new season at the movie shop).   It was a one-month-wedding-anniversary-I-can't-believe-you-got-all-the-thank-yous-written-in-a-month-you-are-awesome present.  It was so sweet. 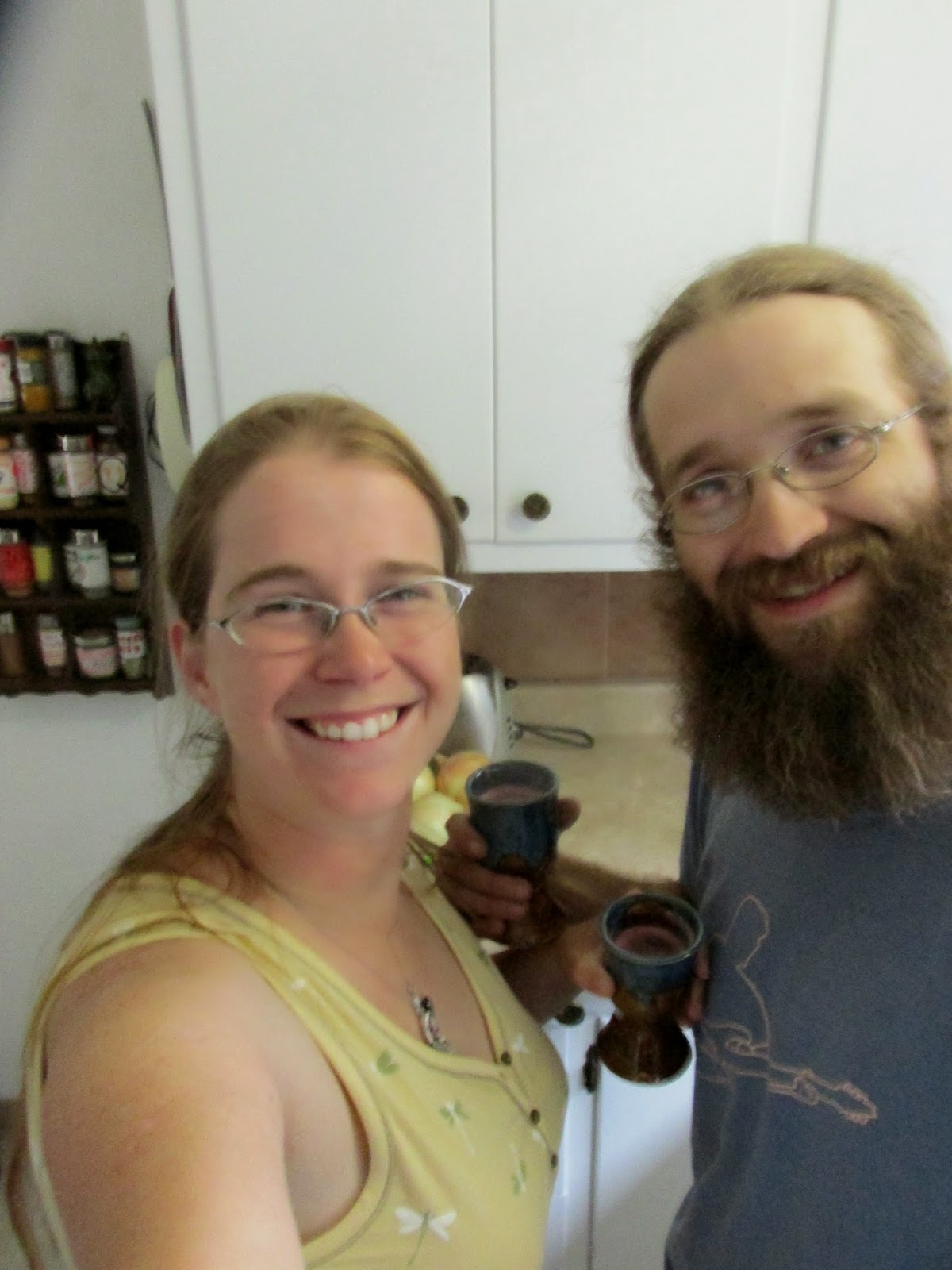 If you've never had lambic, particularly the raspberry (framboise) flavor, I recommend it highly.  Its a bit pricey, but is a fruity, effervescent, taste explosion like no other and worth every penny.  I could drink a whole bottle without even trying because it is so delicious.   Its also pretty incredible stuff, once you learn more about how it is made, too.  It is only brewed seasonally because unlike beer it is fermented only with wild yeast.  Its sort of like the sourdough bread of the beer world.  A true lambic also only come from Belgium where a particular strain of wild yeast is found.  Its pretty crazy stuff.  And out of this world tasty, if you ask me. 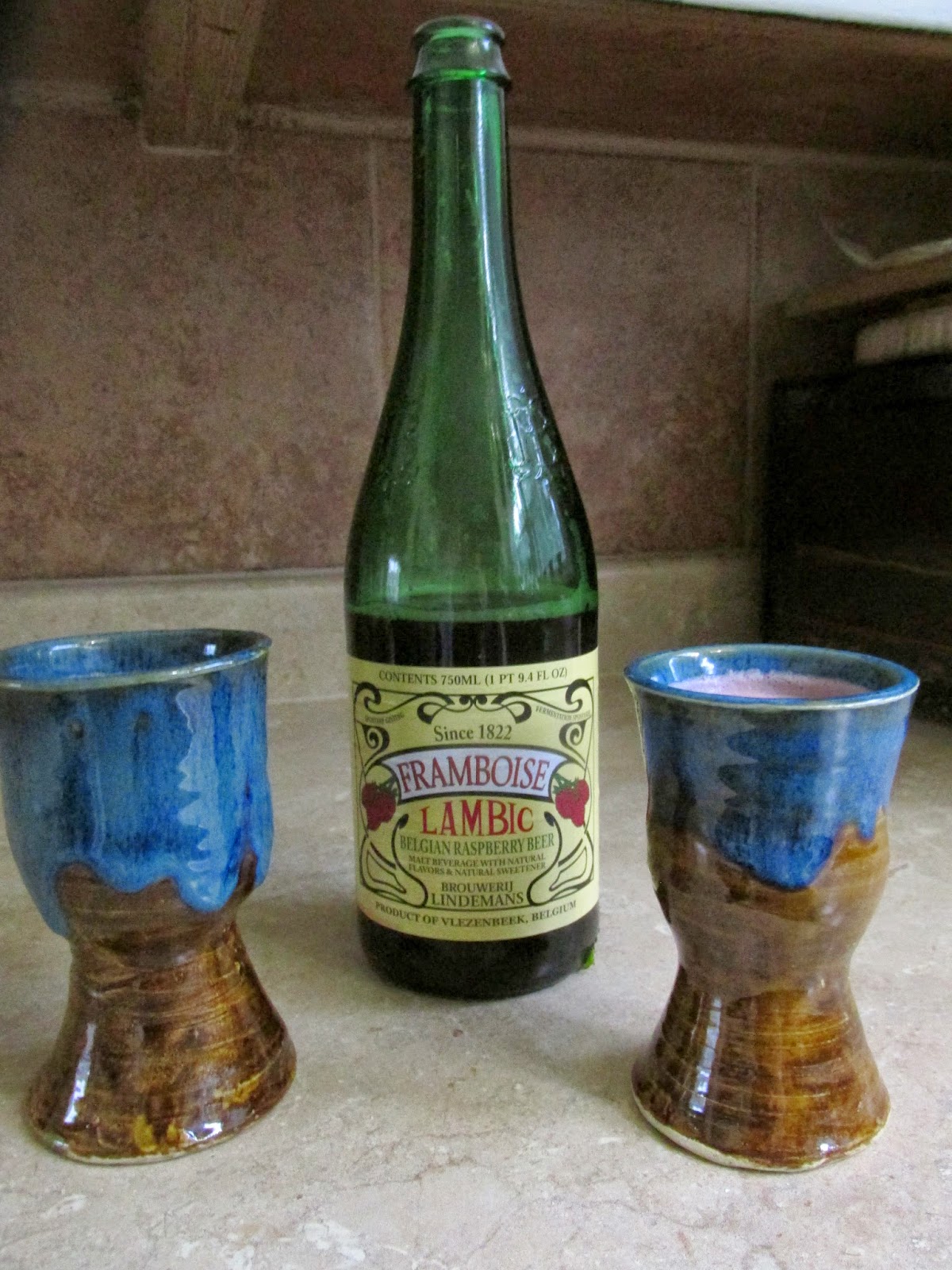 Below is the recipe for the soup we had waiting for us.  It was quite wonderful--hearty, filling, and packed with flavor.  The coconut milk gave it a lovely richness and mouth-feel.  We used our homegrown chard, my Uncle David's Montana-grown lentils, and homemade stock in this version.

Saute the onion in the oil on the stove-top until its starts to brown.
Add garlic and spices and saute a couple more minutes.
Put onion mixture, lentils, and stock to the slow cooker.
Cook on high for about two hours (or probably four hours on low).
Add greens and coconut milk and reduce heat to low.
Cook until greens are wilted and lentils are tender.
Salt and pepper to taste.
By BLD in MT