Catching Up in the Garden 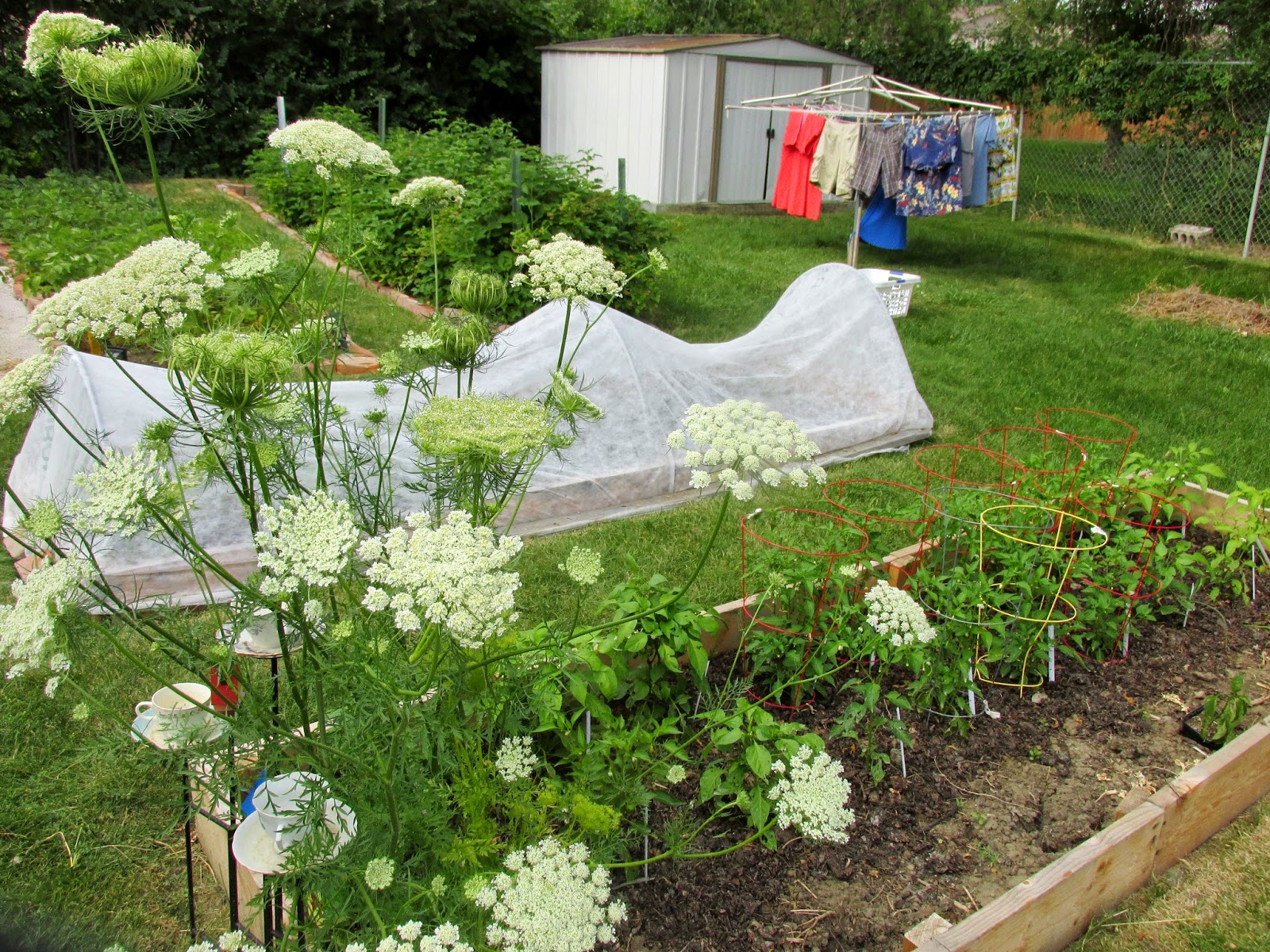 Possibly we should have scaled back the garden this year since we were planning a wedding smack-dab in the middle of the summer and all.  But, that would have been too reasonable so, of course, we didn't.  As such we've been feeling behind in the garden for a good portion of the summer so far.  When we had a house full of guests we encouraged them to gobble up the red strawberries and the swelling pea pods.  We just weren't getting to them fast enough.  But, you don't really have to tell people more than once to go nuts on a backyard strawberry patch.  In addition to being behind on planting, harvesting, and weeding the garden I have also been behind in documenting its progress this year. 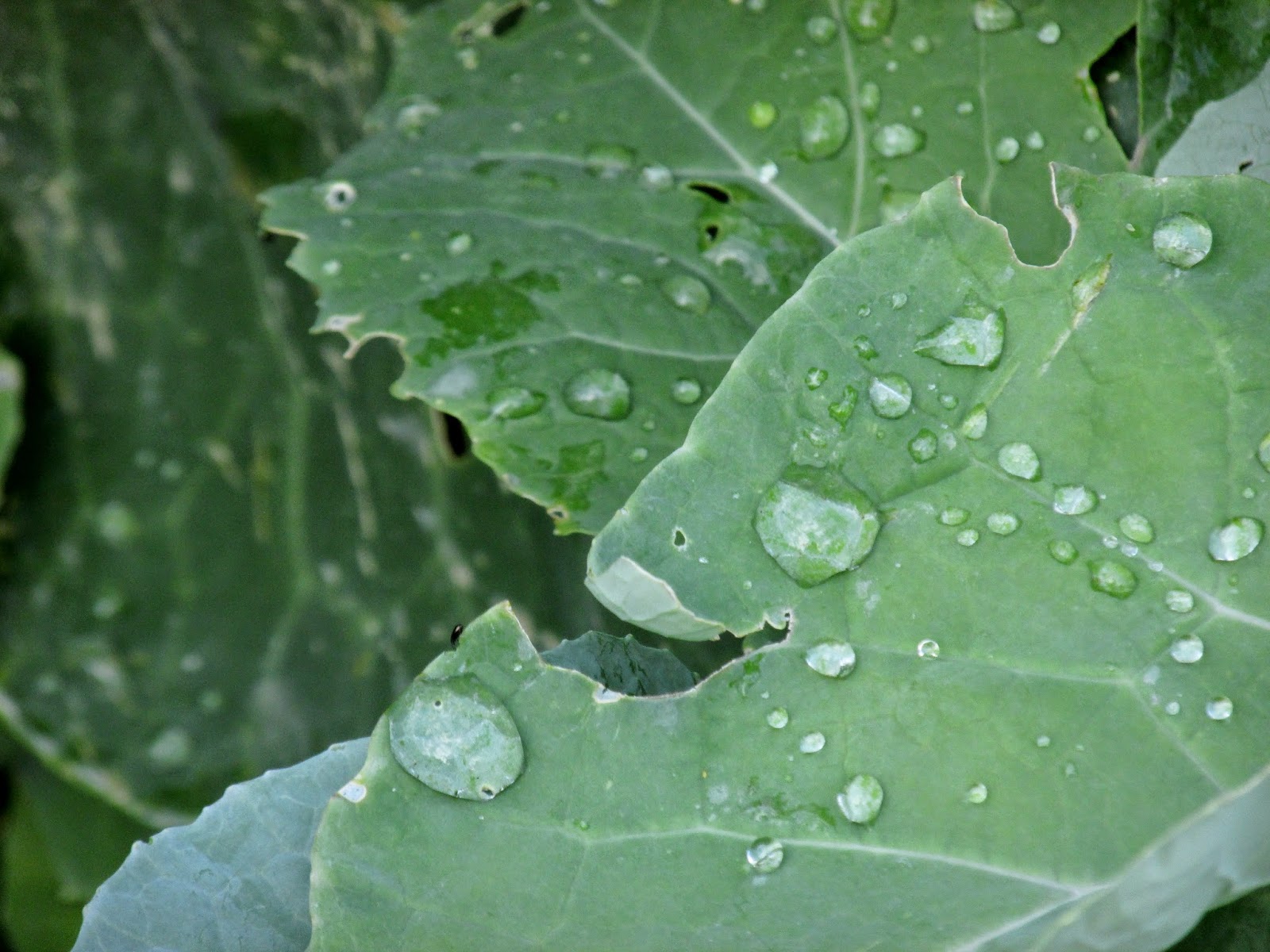 Our pepper plants may be the stars of the garden this year.  Fine by me.  Peppers are my favorite vegetable.  We're growing quite a number of hot peppers--mostly cayenne--as well as some sweet peppers.  I make my own hot sauce with the cayennes.  I generally string them up to dry so they're on hand for making the sauce in the winter.  We freeze what we don't eat fresh of the sweet peppers. 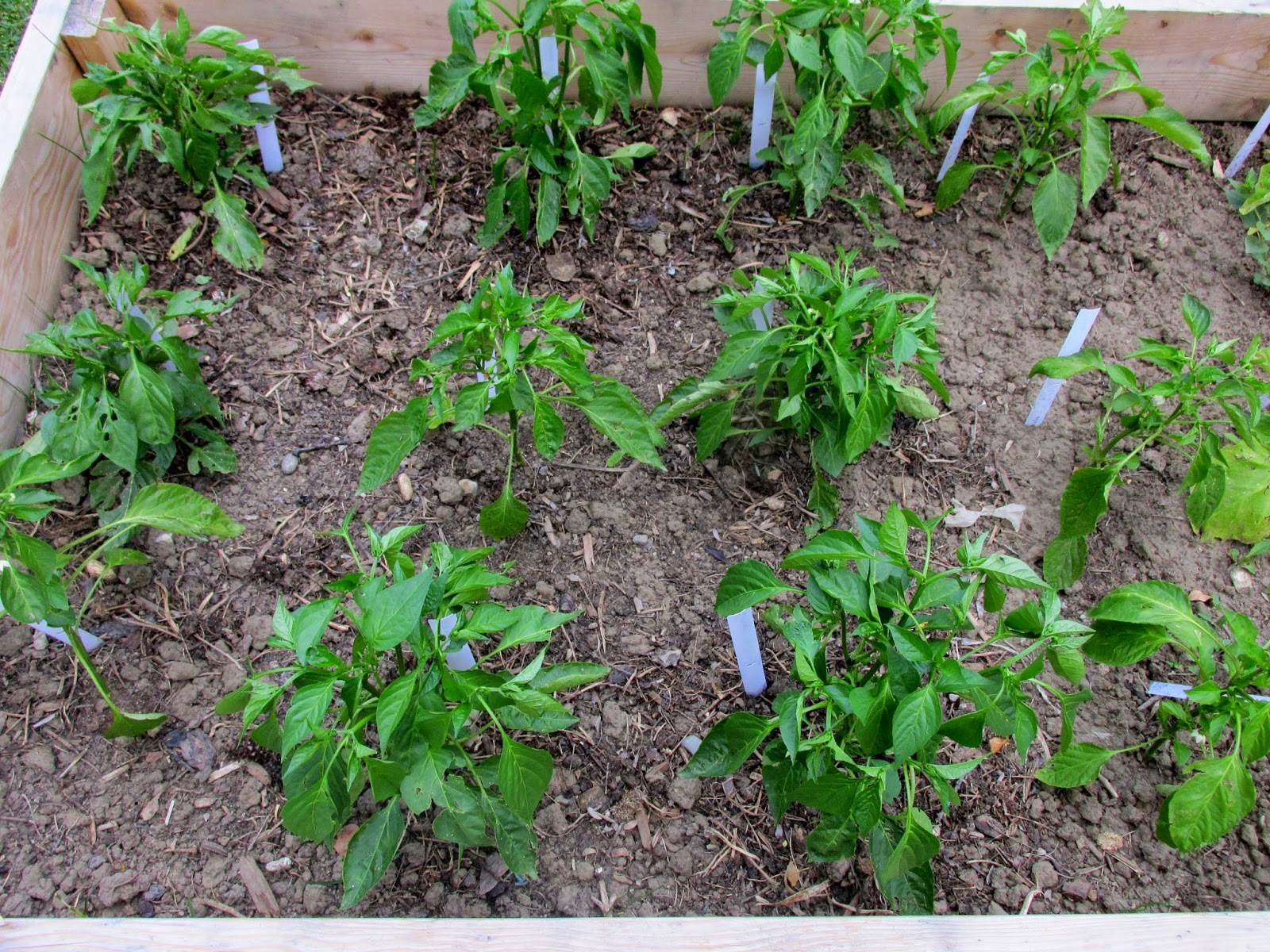 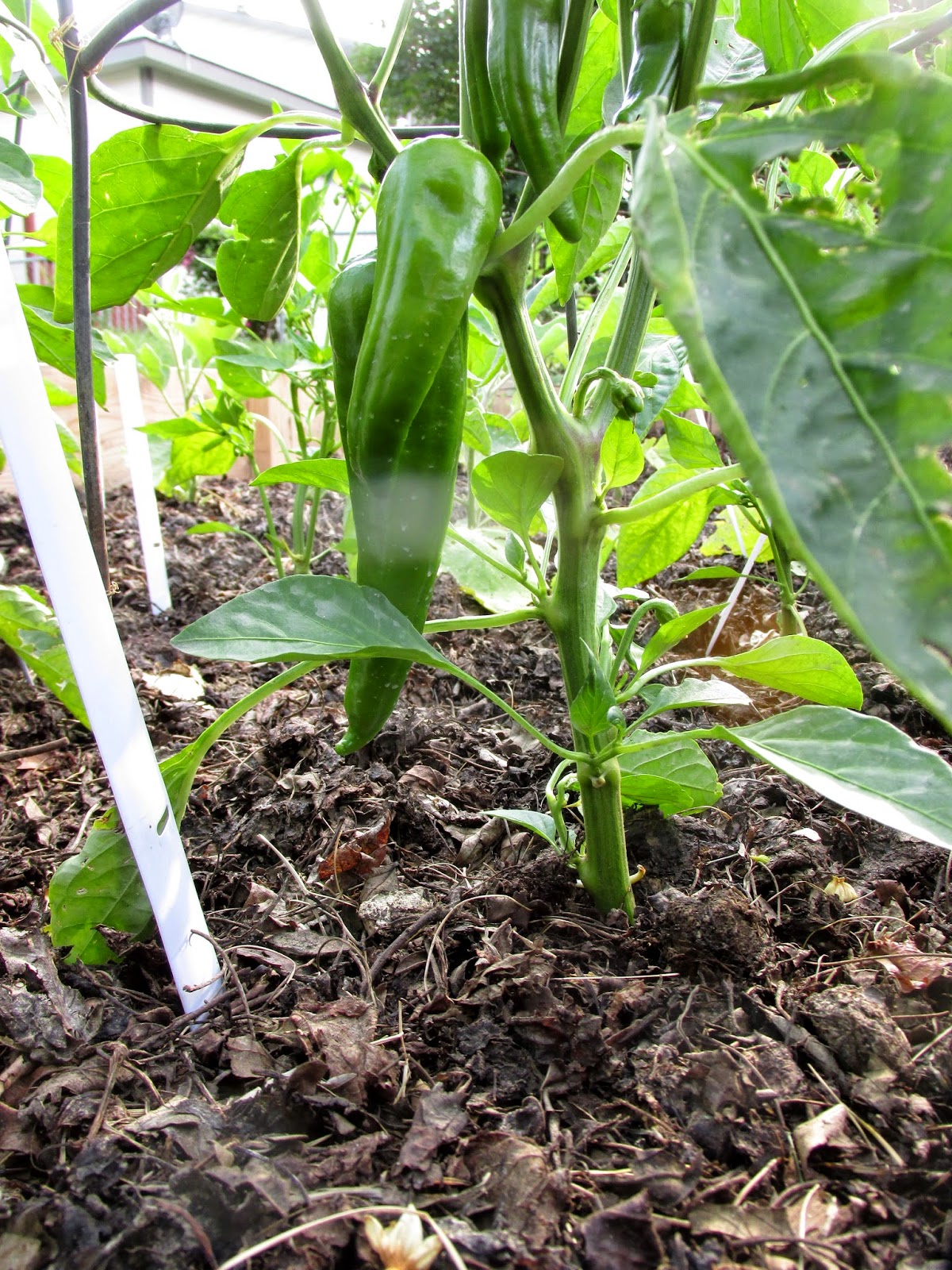 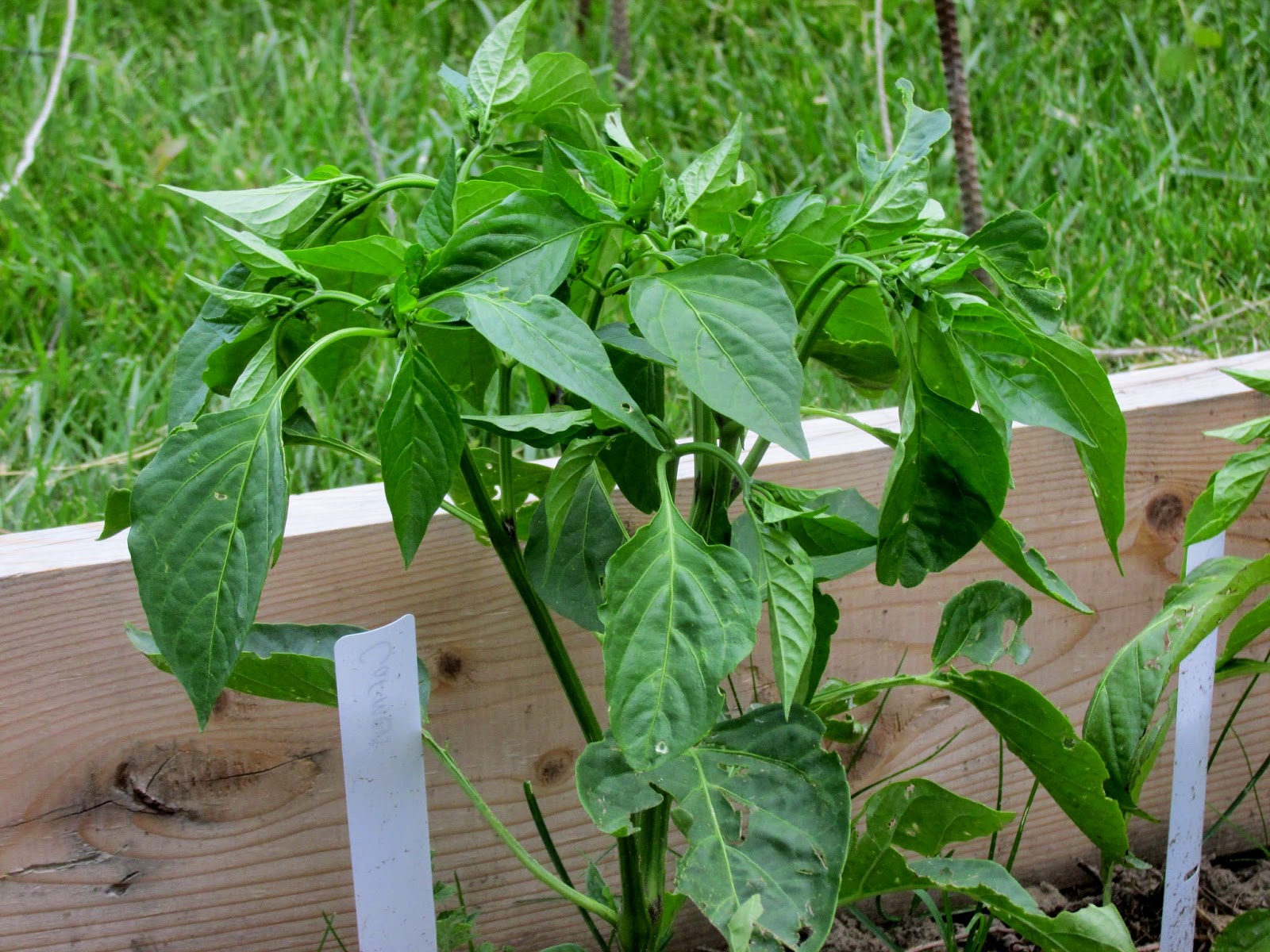 We're trying to save seed from our carrots this year.  We've never done this before with carrots.  They take two years to make seeds so these are actually carrots from last year, some of those carrots we overwintered.  Since it was already starting to form the flowering stalk when we cleared the bed of the last remaining carrots we figured we'd just let it keep going.  It would be cool if it worked.  Every year we try to save more and more of our own seed.  The flowers are pretty, too. 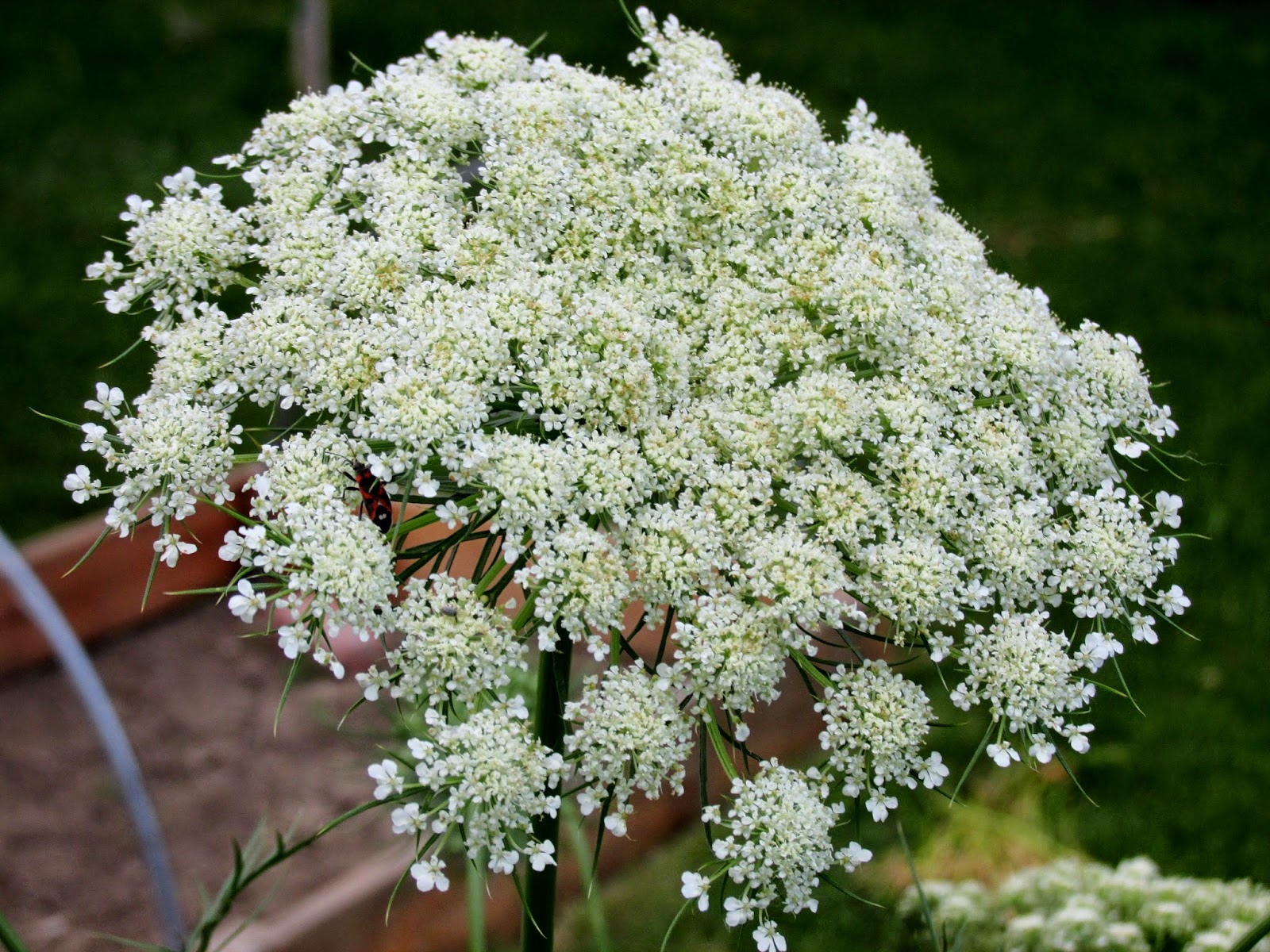 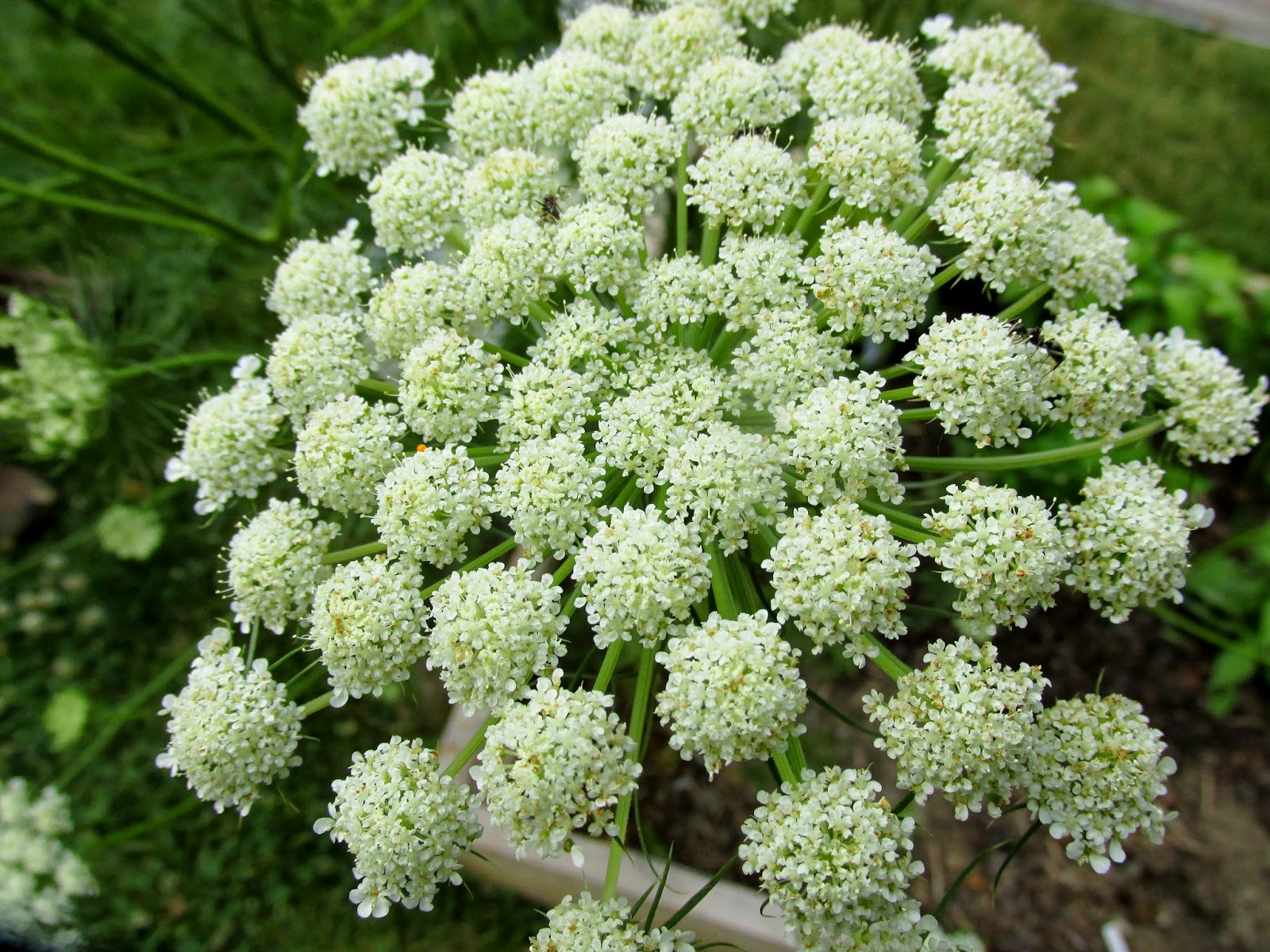 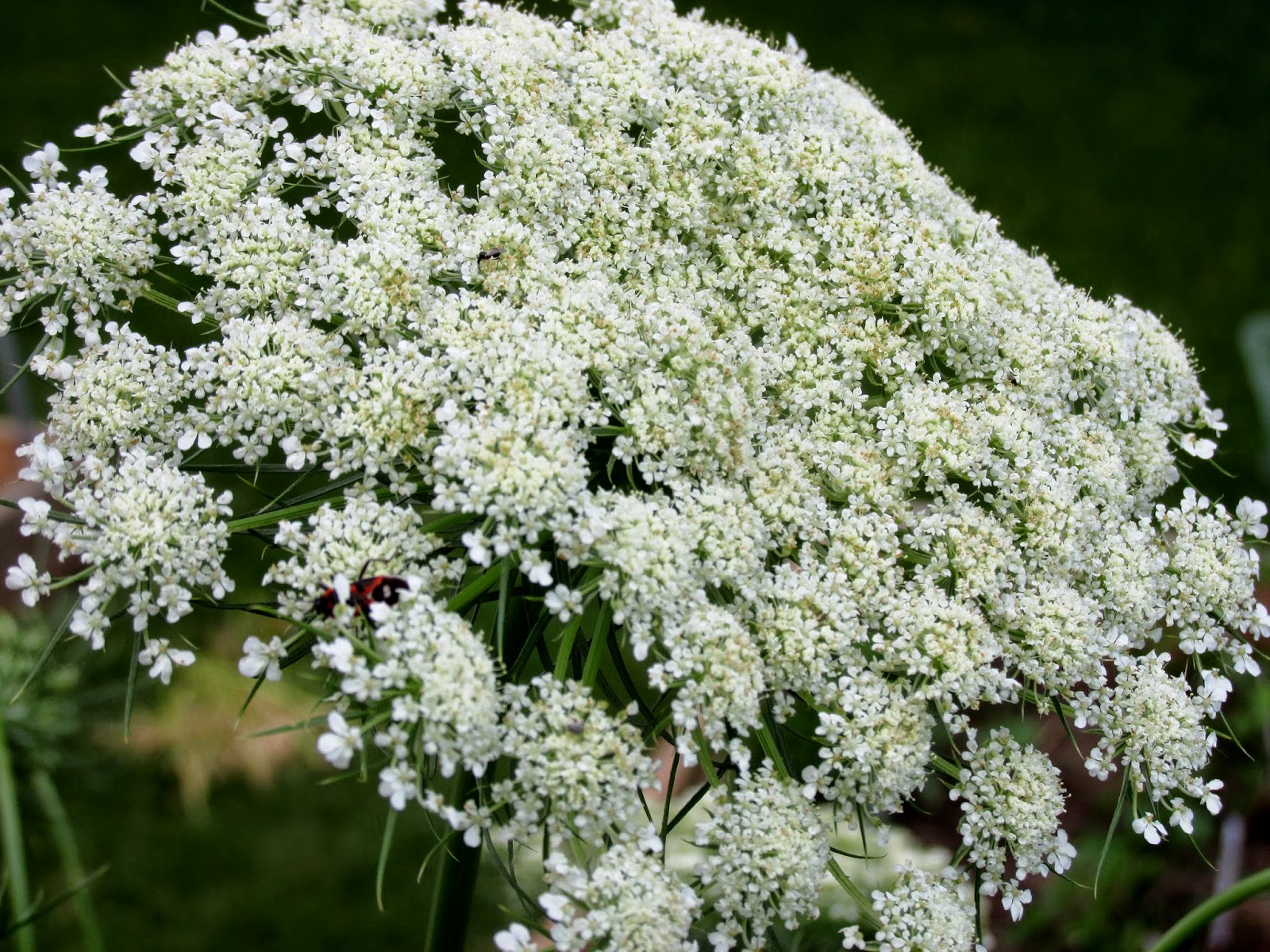 We've got three types of dry beans--Yellow Indian, Red Mexican, and Hutterite Soup beans--and one variety of green beans growing.  I think these are some of the most interesting looking plants in our garden.  Beans are fun to watch grow.  We are growing dry beans we save from last year with the exception of the Hutterite Beans which we found an outdated package of just kicking around the basement.  The germination rate wasn't great, but they were not packed for this season so.... 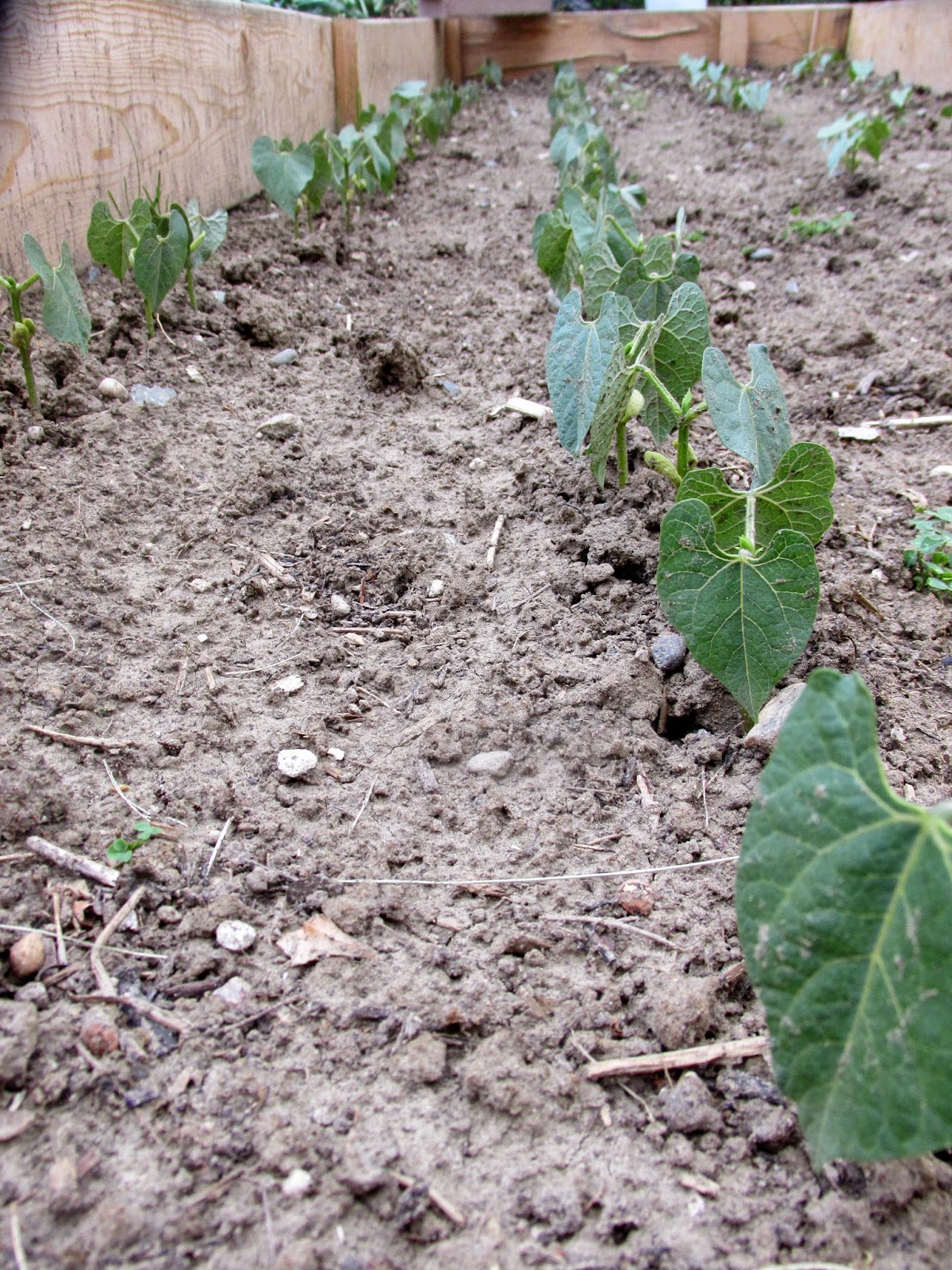 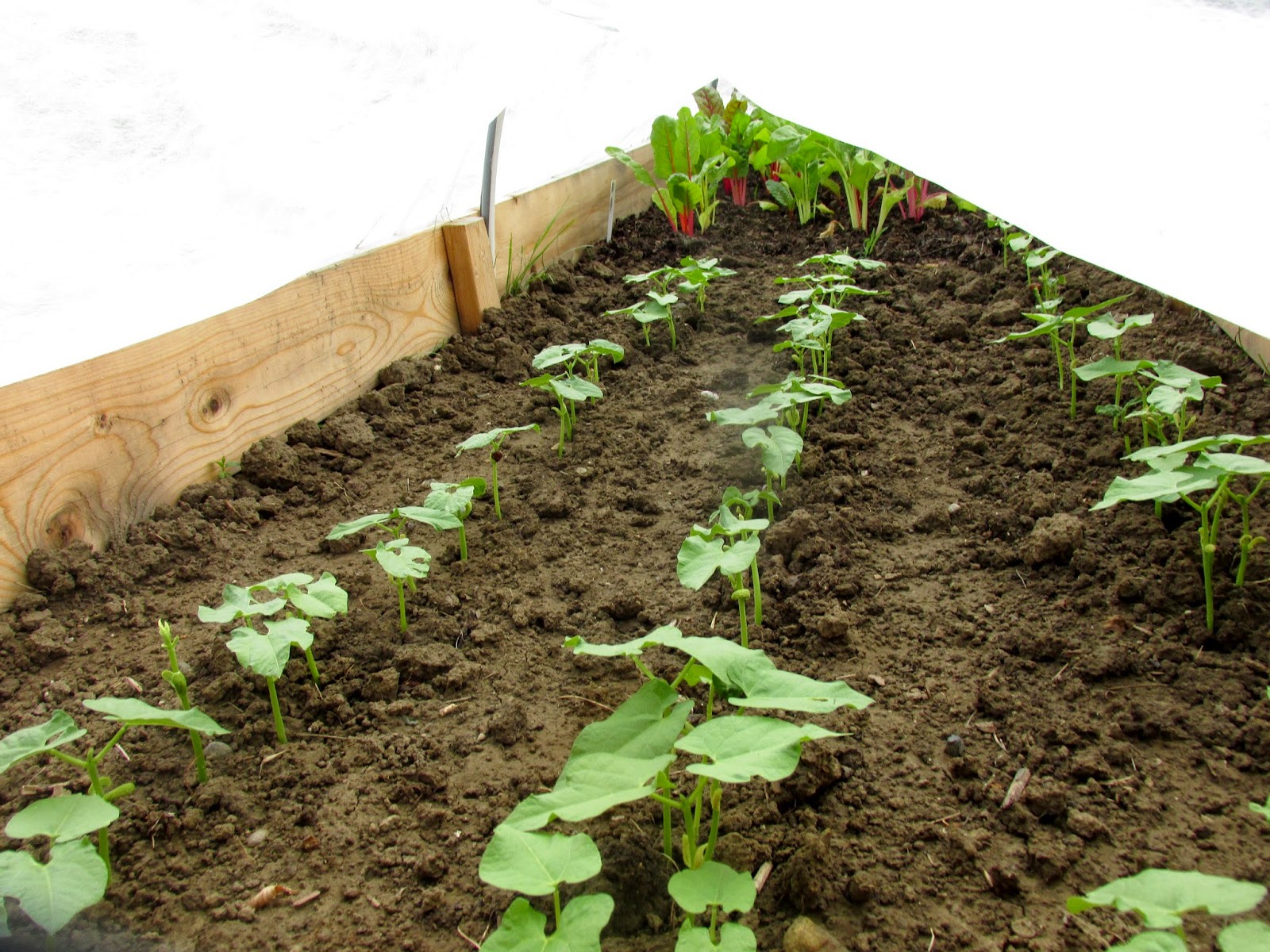 We ate our first ever homegrown cabbage earlier this week in some stir-fry.  It was awesome.  We didn't even know we liked cabbage until last year.  We're growing a variety that is known for small heads since there is just the two of us.  They're cute and tasty. 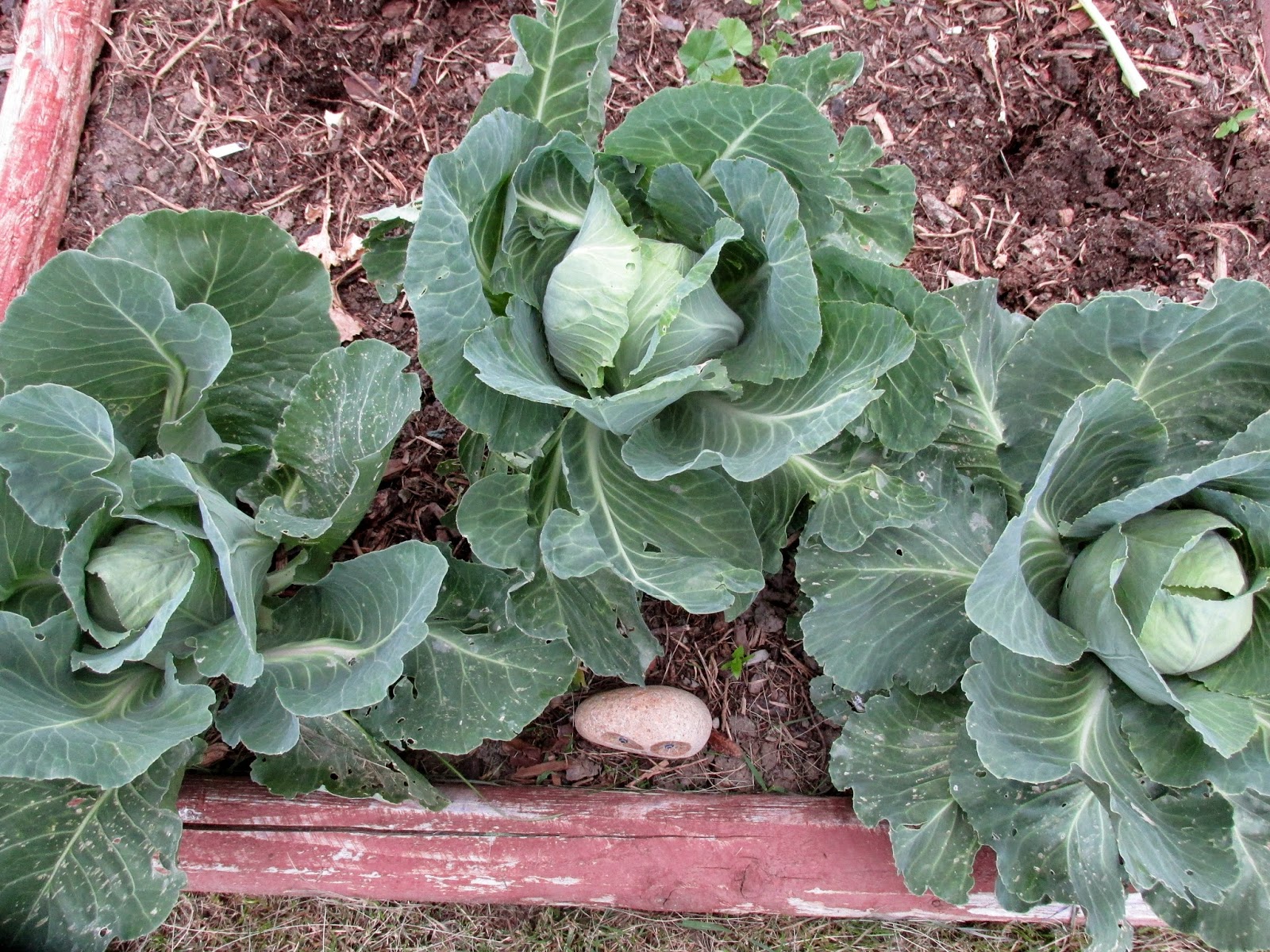 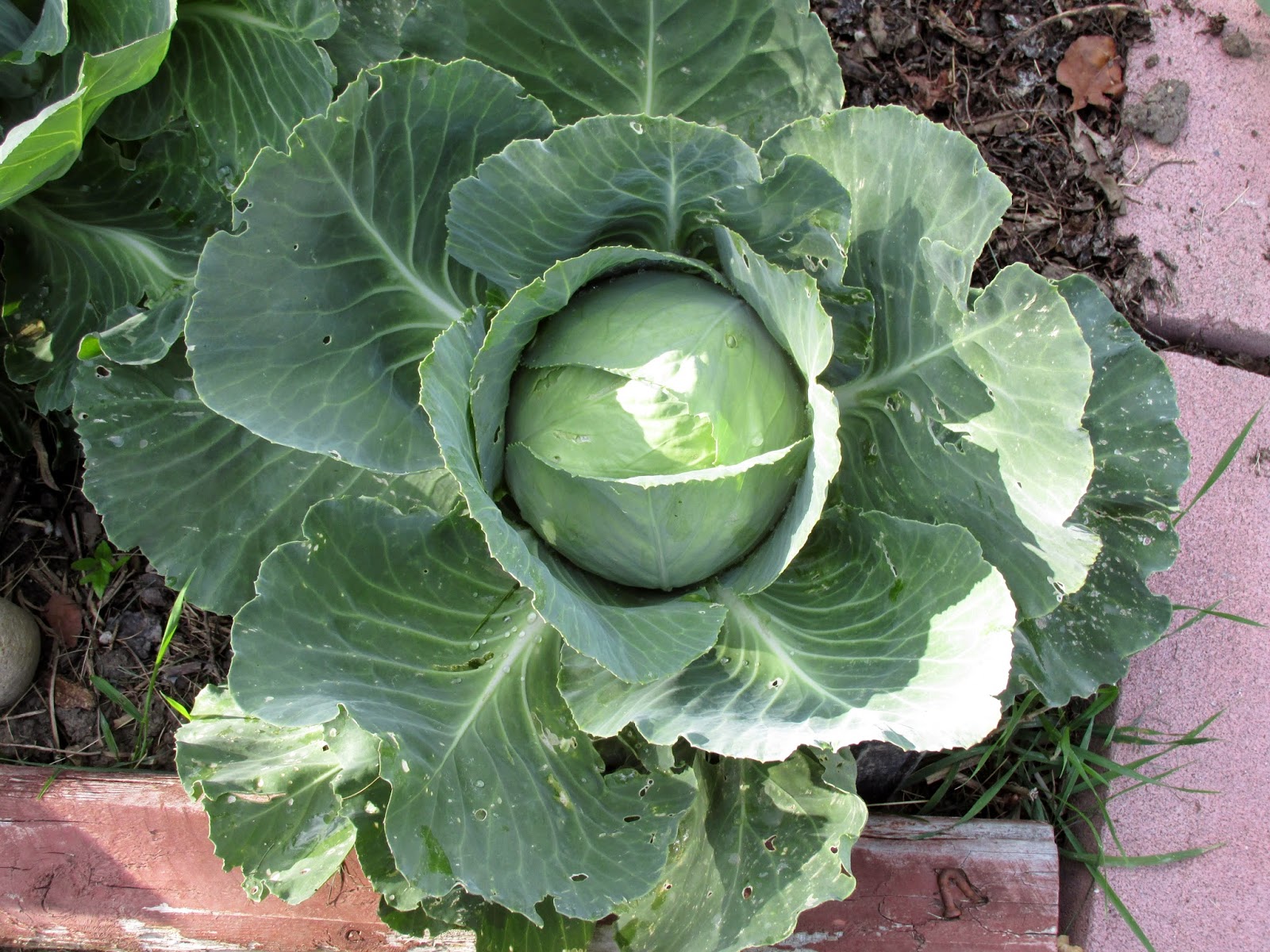 I also got to eat my first ever homegrown cucumber this week.  See, Matt hates them--as in, when I am cutting one up he thinks it stinks up the whole room--so we've never grown them.  I've always just gotten some from Matt's dad or the Farmer's Market to supply my own taste for them.  But we would like to grow them for pickles and so this year was a sort of trial run for that.  We wanted to see how many cucumber vines it would take to get the amount we needed for pickles.  We also wanted to try out a variety that is supposed to only grow small, thumb-sized cucumbers which is what Matt and I prefer for our pickles.  It seems like its possible, but that we'd have to have a whole bed dedicated to cucumber vines.  We're not sure we have the space to devote--especially since we have never had any trouble getting small cukes at the Farmer's Market come pickling time.  But, I sure enjoyed the cucumbers.  They were so crisp.  They were also very spiny.  So much so that I opted to peel them before eating, even after a good scrub with our vegetable brush. 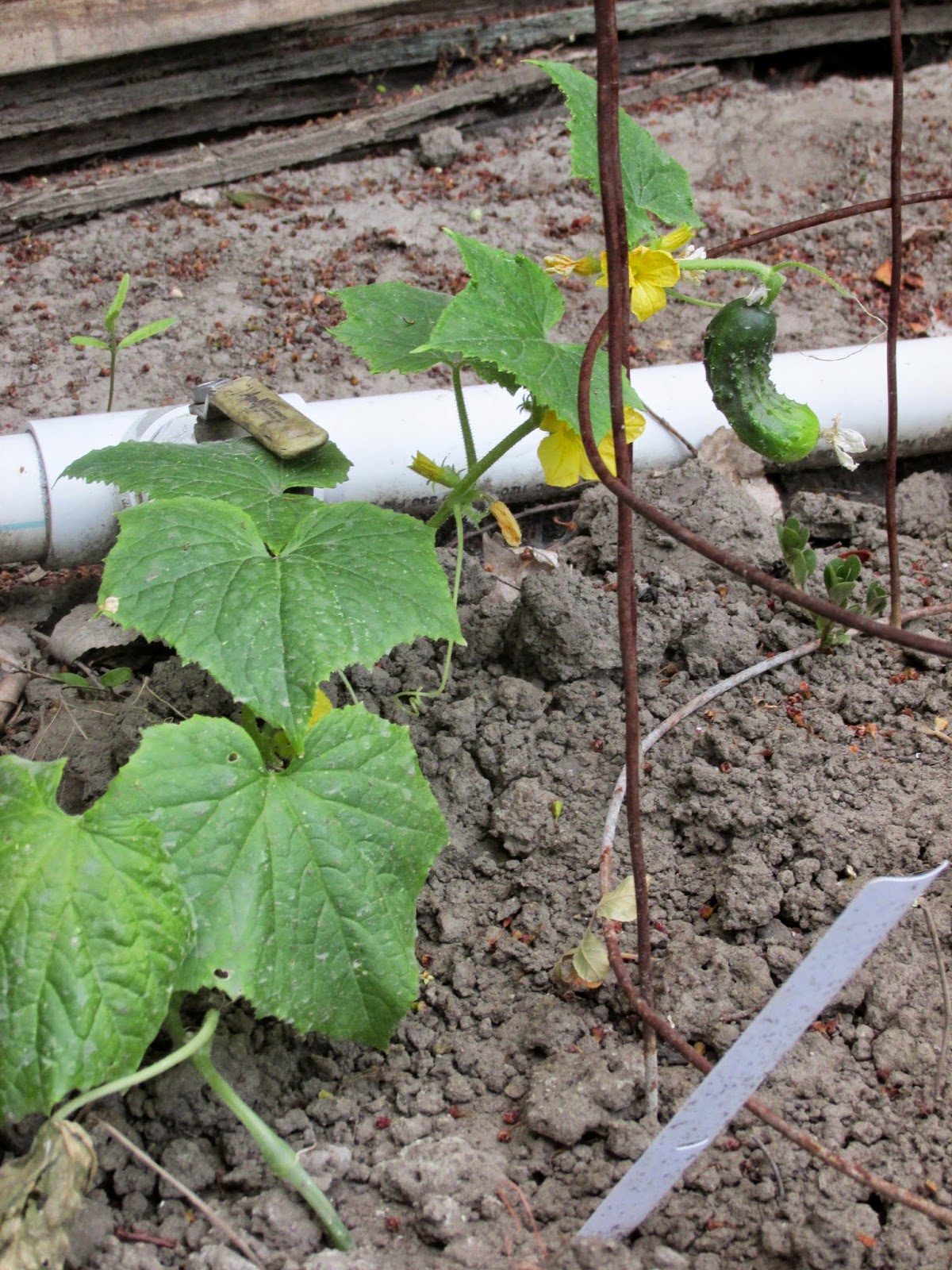 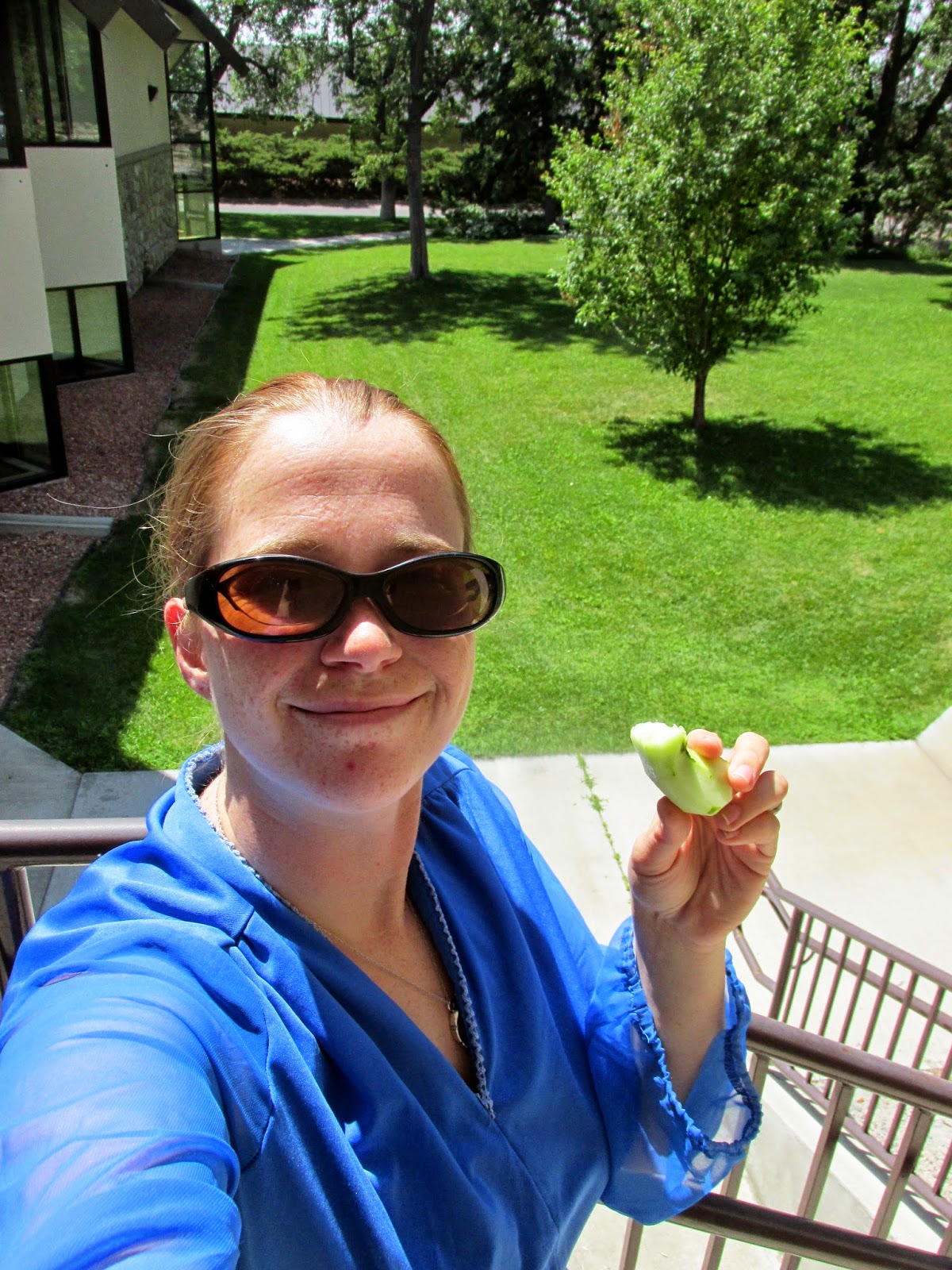 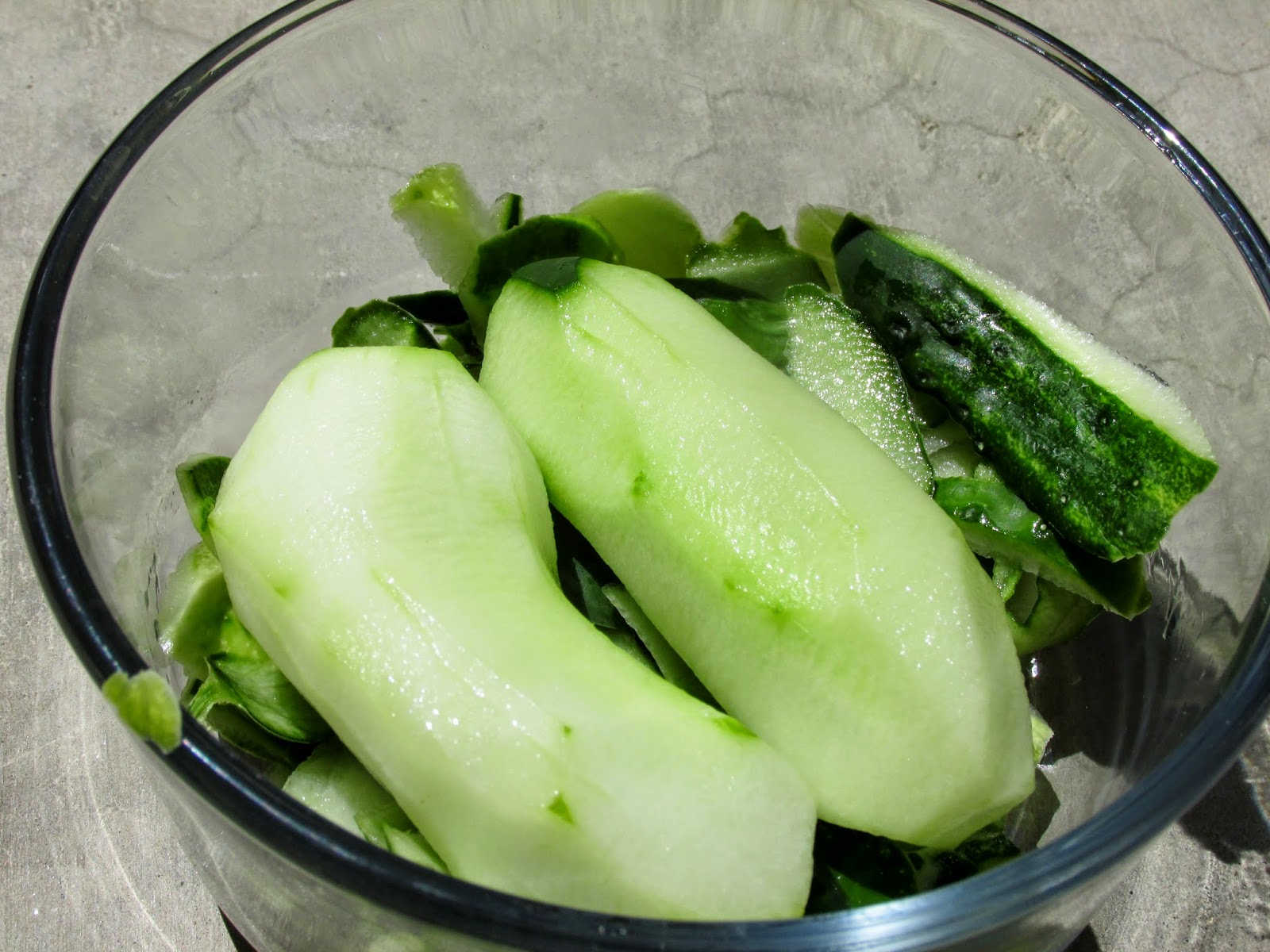 The potatoes are growing well.  At least, the part we can see is.  I hope they do better than last year.  Last year was just pathetic...and the tops had looked pretty good then, too.  We've got them scattered in a few different places though--two patches at home and one at the community garden--so hopefully that will increase our odds of a successful crop. 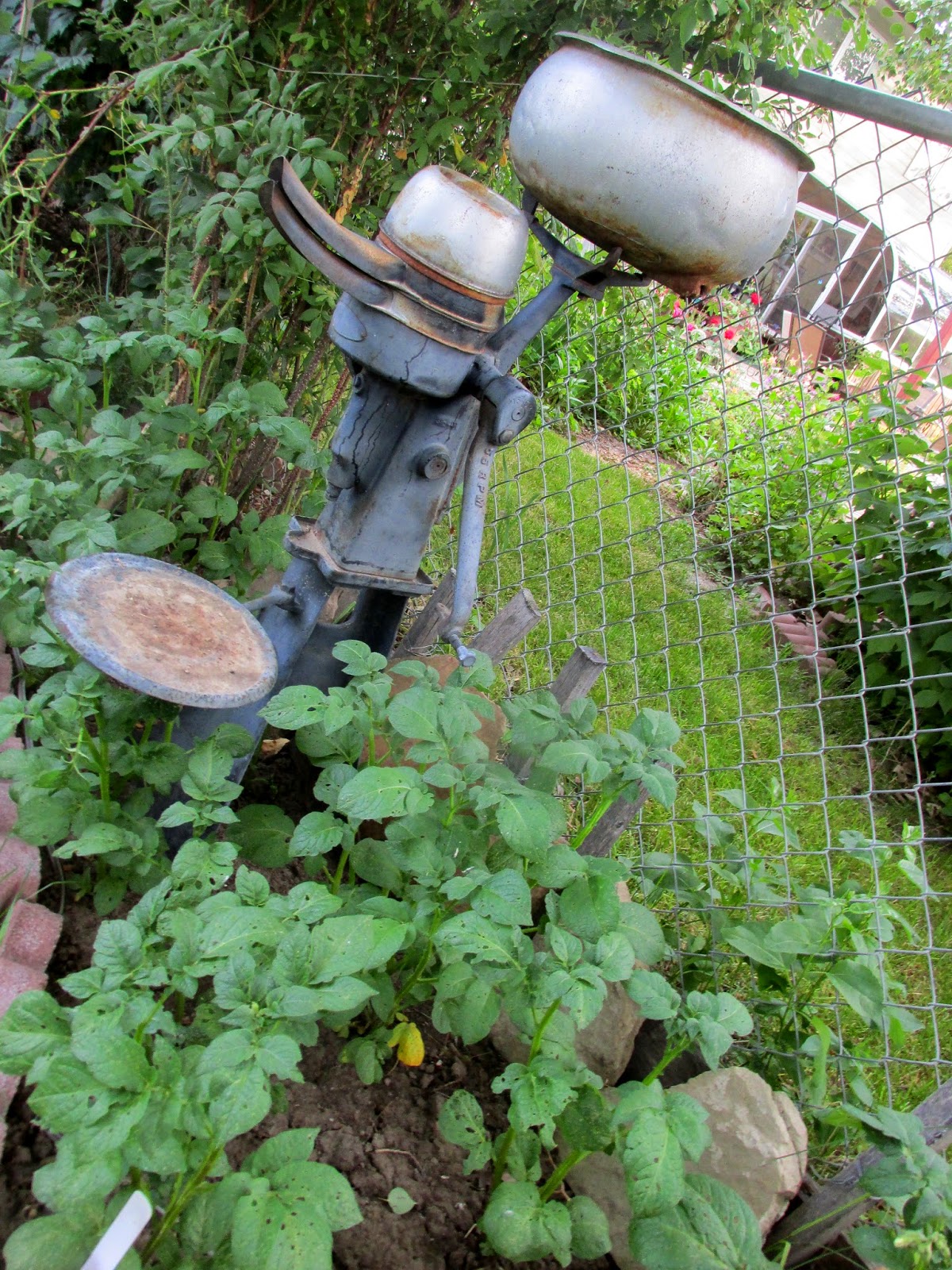 We harvested the garlic.  Its not great, but it is garlic.  So, that is something.  They really got hammered by this extreme weather we've had, particularly the hail.  They never formed scapes this year, which we found odd, but, the leaves were dying back so we harvested them, scapes or no scapes.  We only ended up with something like one pound of garlic.  Better than nothing, but not exactly what we'd hoped for. 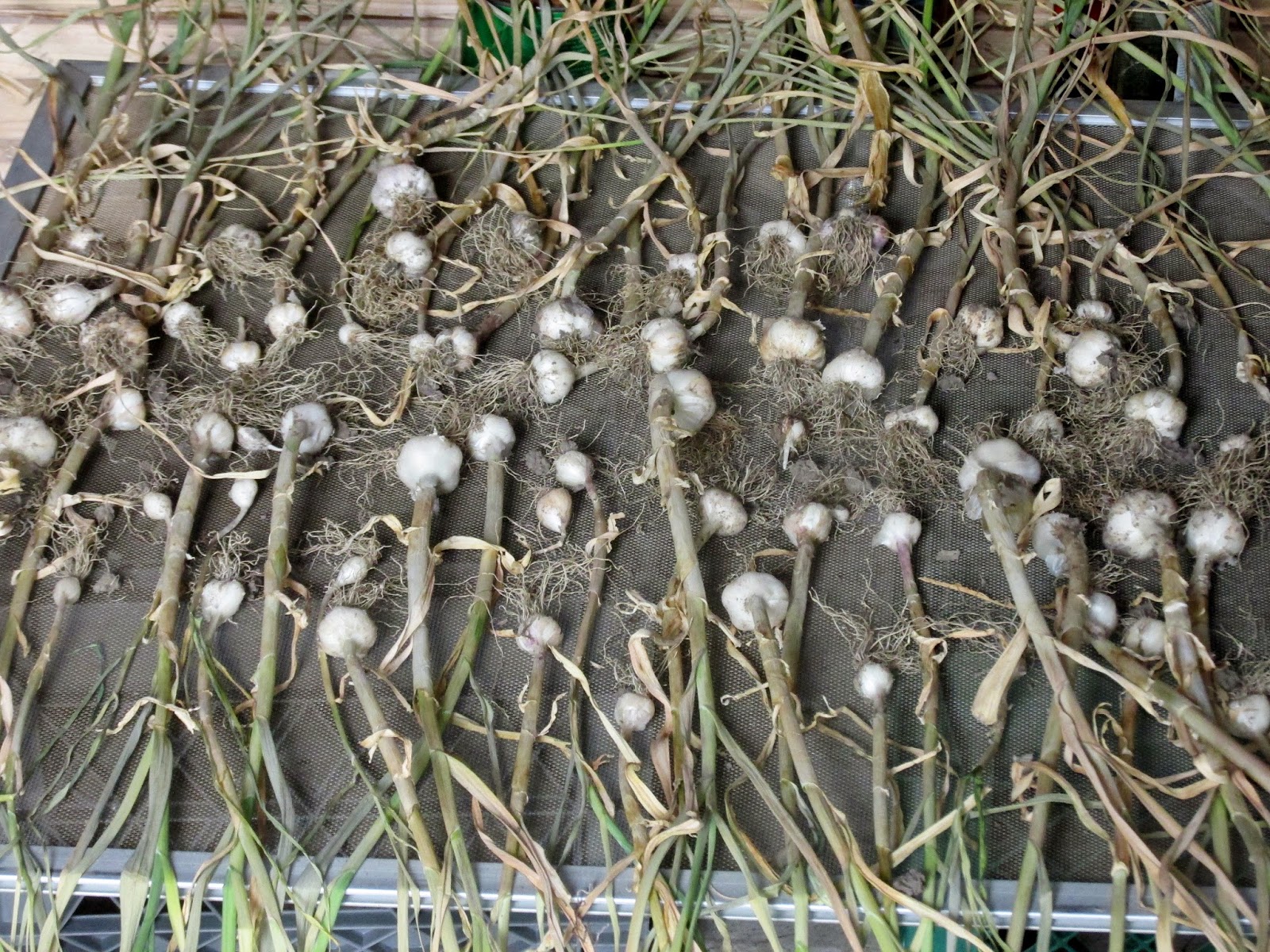 The corn is growing, but still pretty skinny at this point. 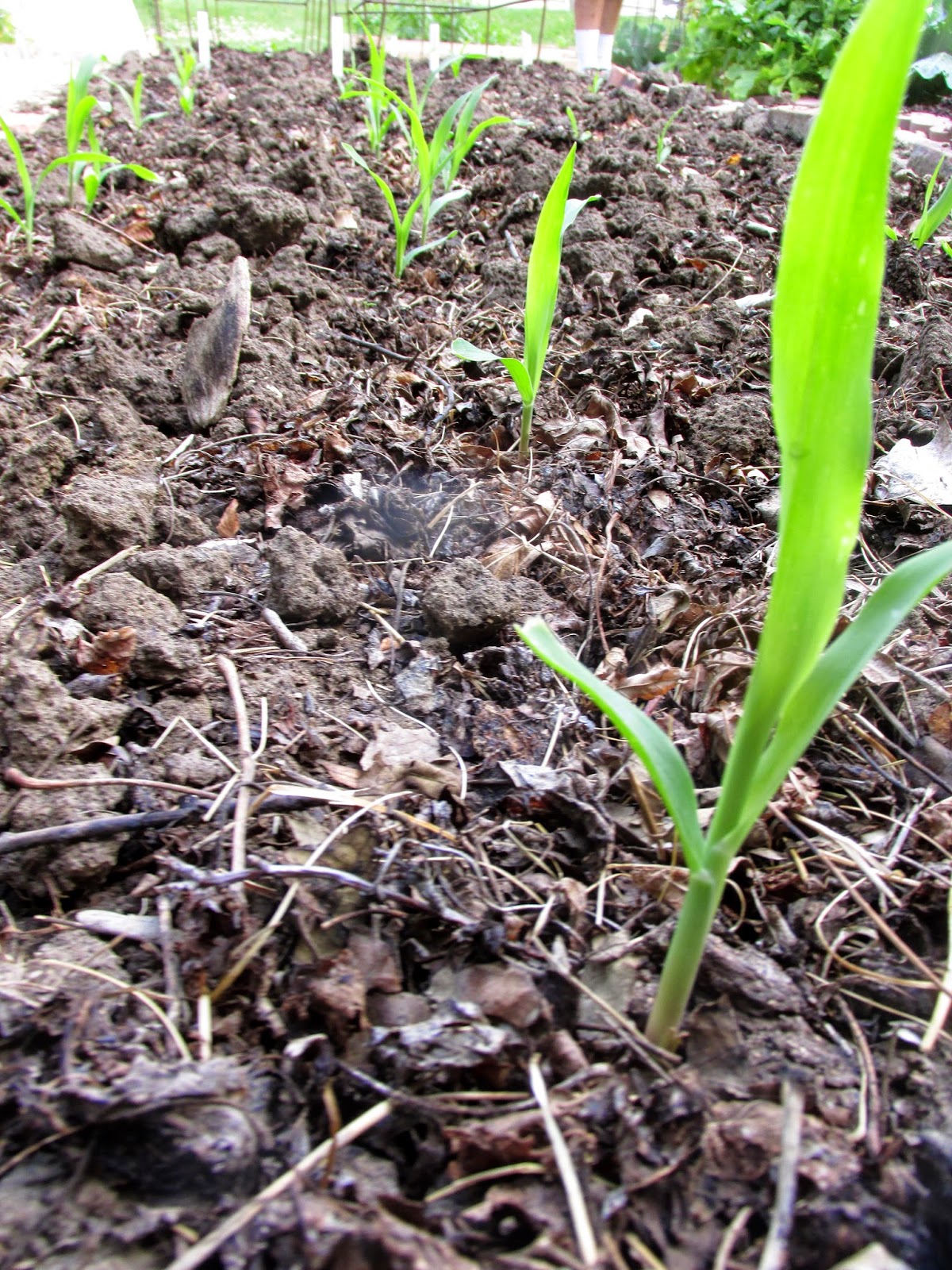 Another new-to-us vegetable growing experience is turnips.  We grew a variety called Snowball and they were, as the name implies, round little white balls.  We've found we really enjoy most of the root vegetables and so we're trying to diversify our repertoire of this type of vegetable.  Roasted they taste, to me, pretty much like a potato.  I like them a lot.  We've been told they overwinter well, too. 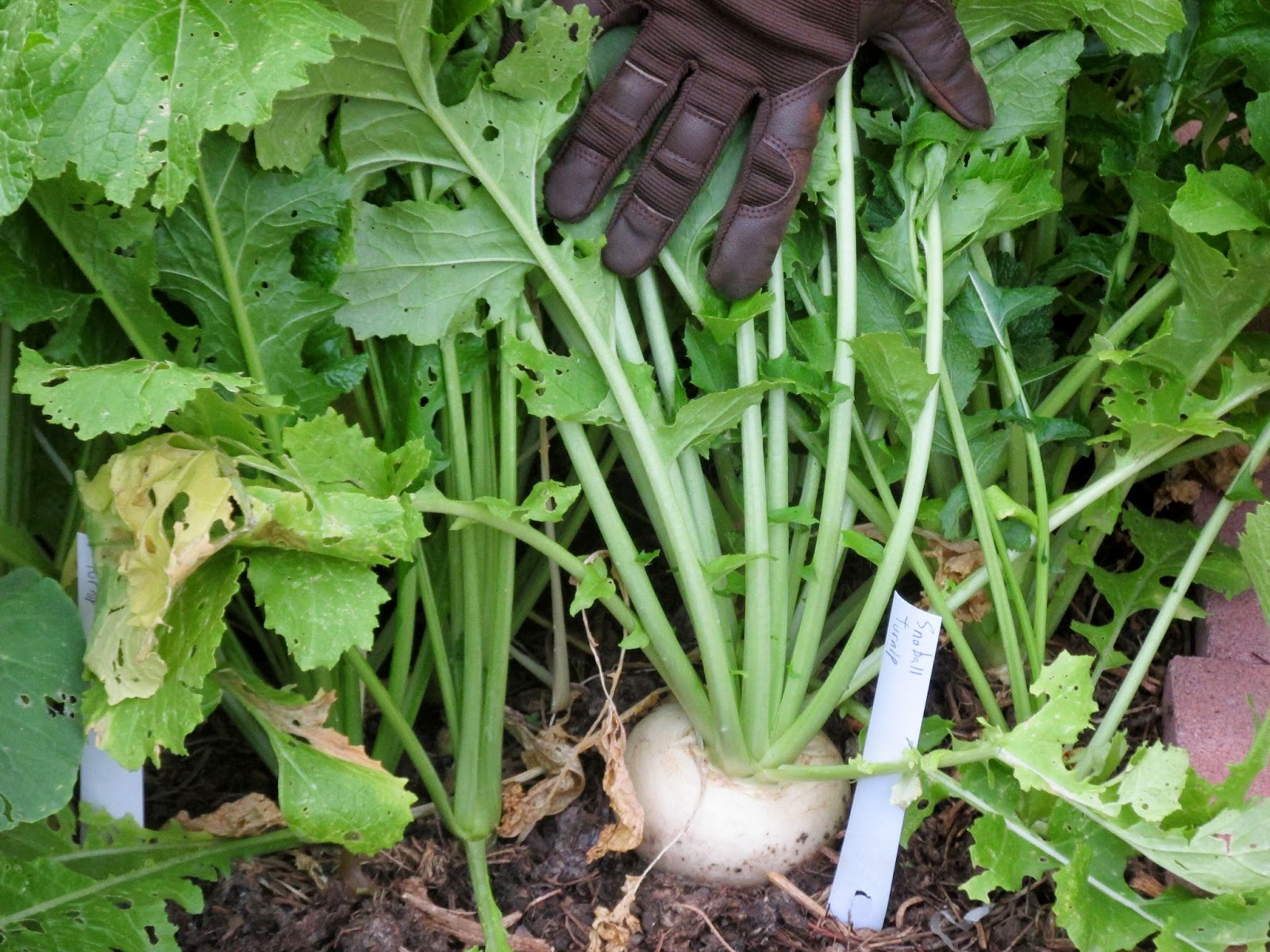 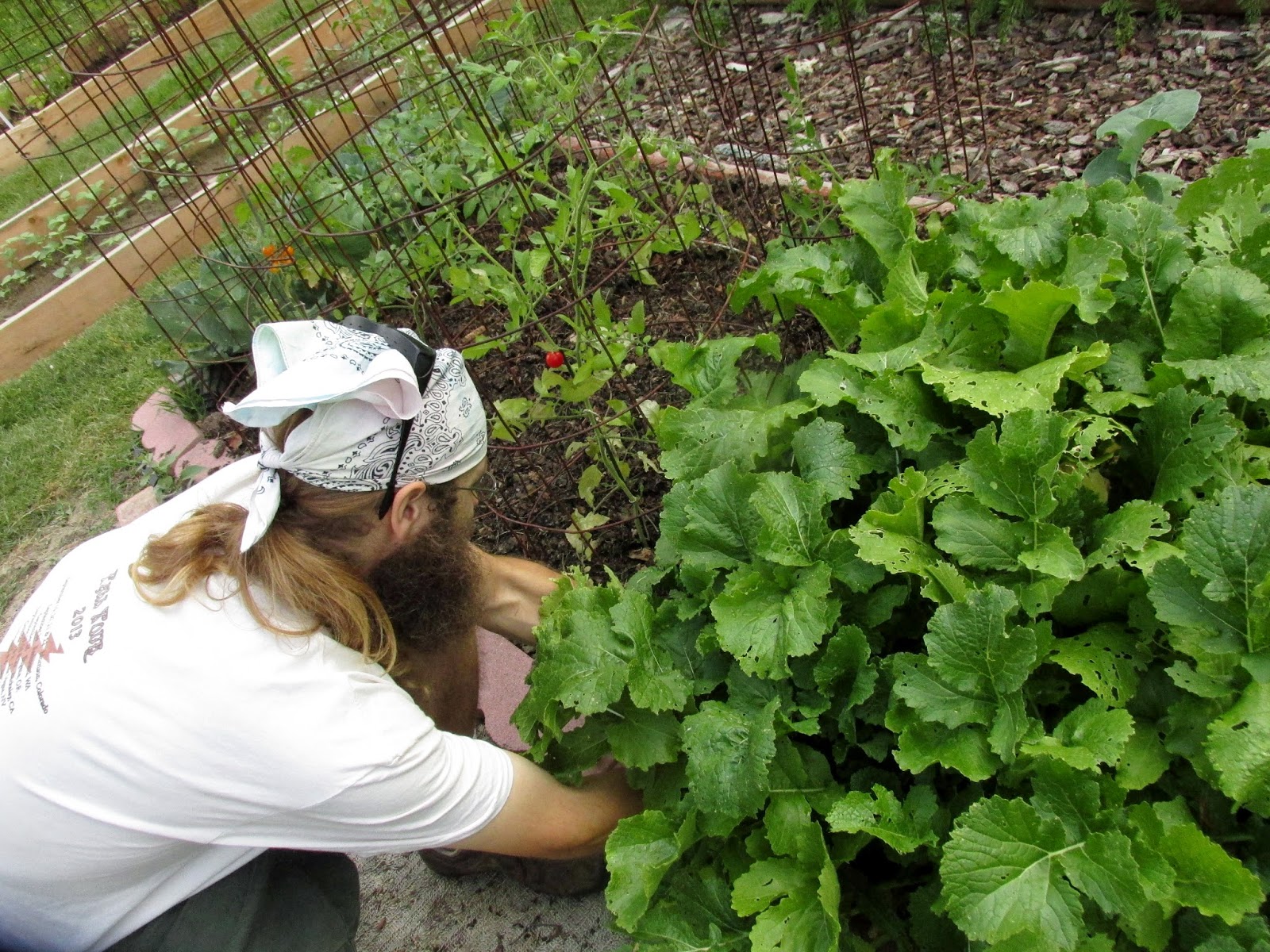 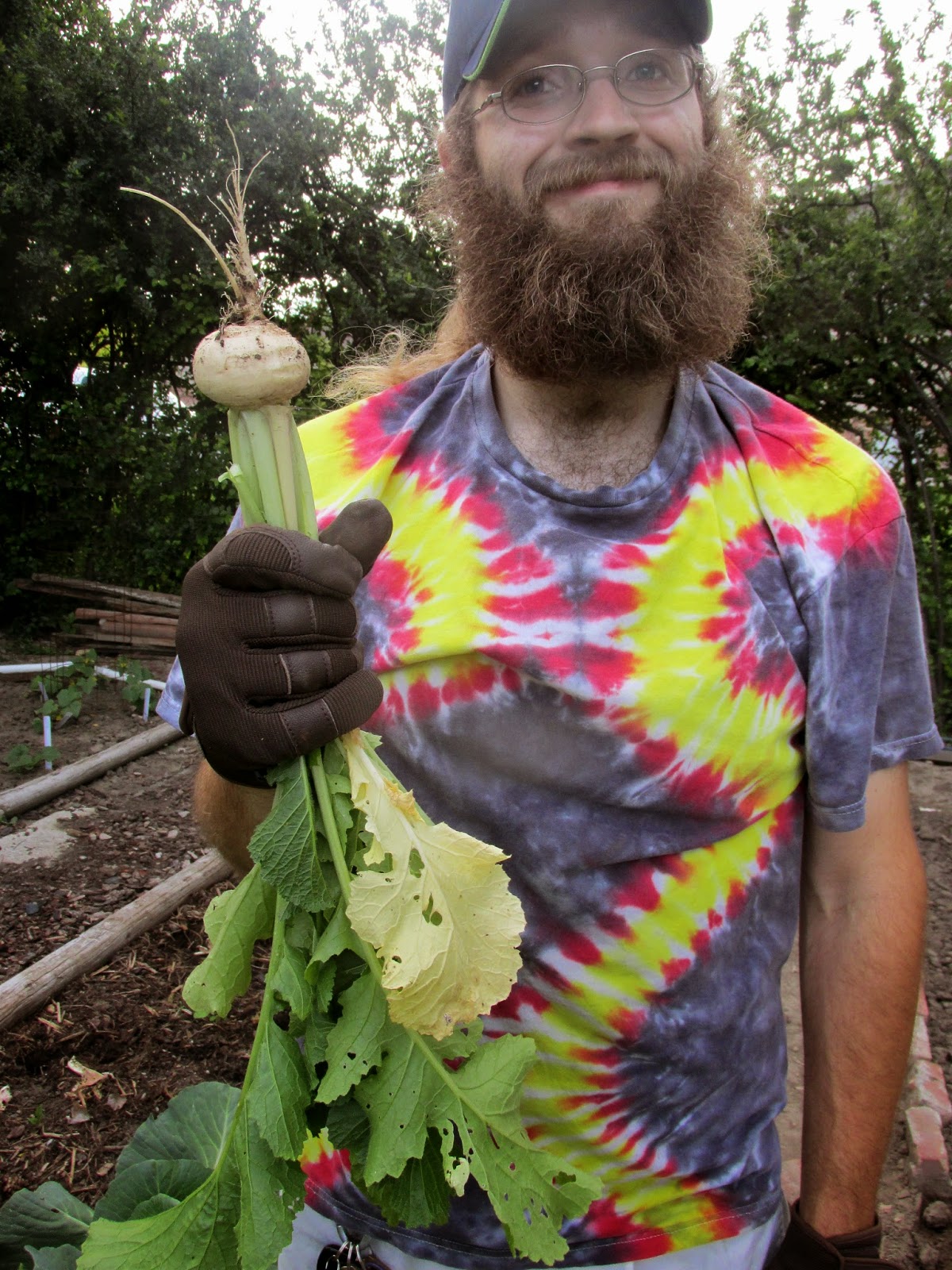 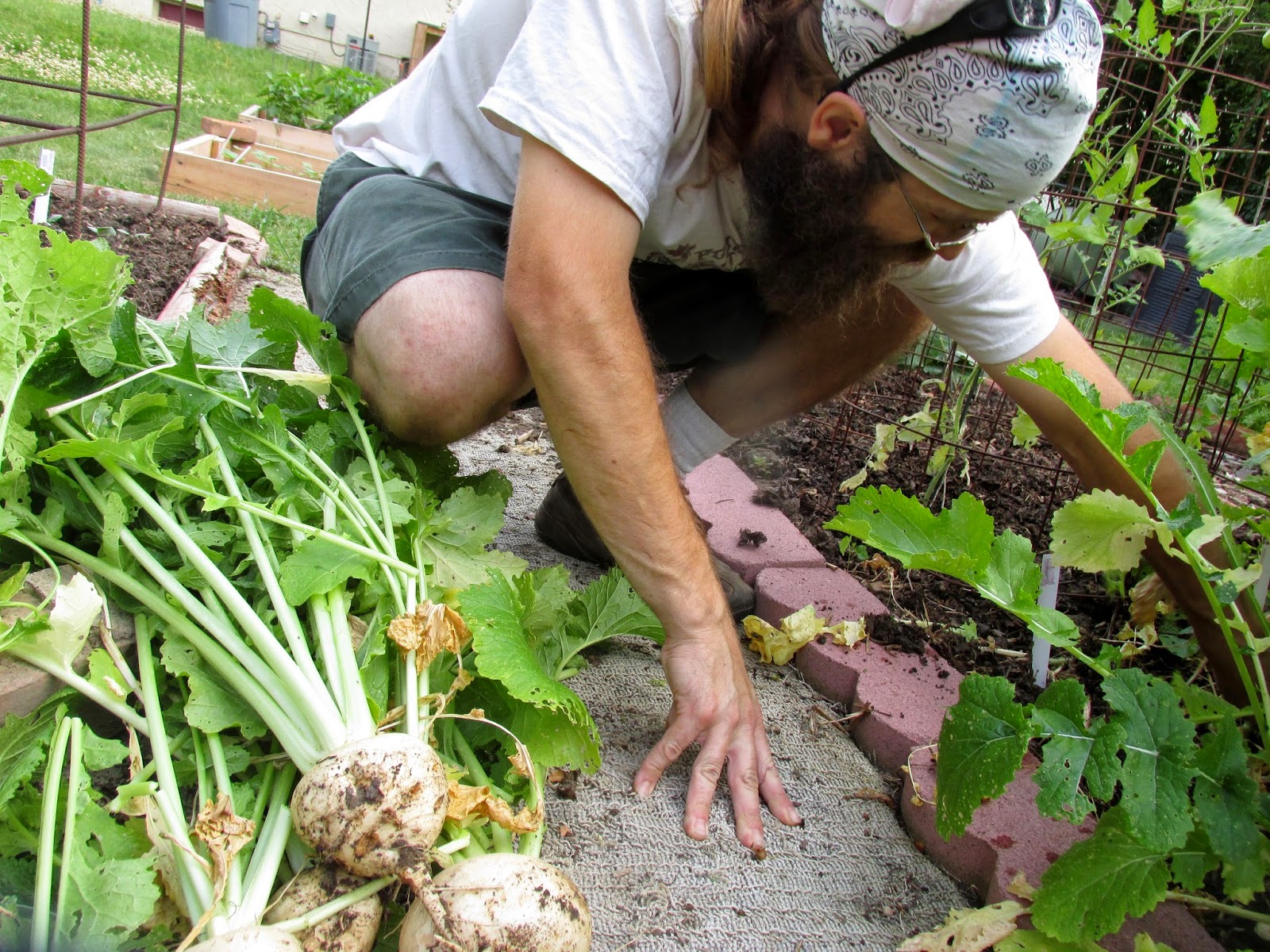 The raspberries are fruiting right now.  I ate as many as I could find yesterday.  They never make it into the house, as they are still fairly young canes so they are not loaded with berries or anything.  Oh, do they rock my world in deliciousness though.  I like the red ones best, but the golden raspberries are quite beautiful and yummy as well.  I look forward to the day there is enough to make raspberry jelly, but in the meantime they are wonderful to pop in my mouth.  Its a fruity, wonderful explosion on my tongue. 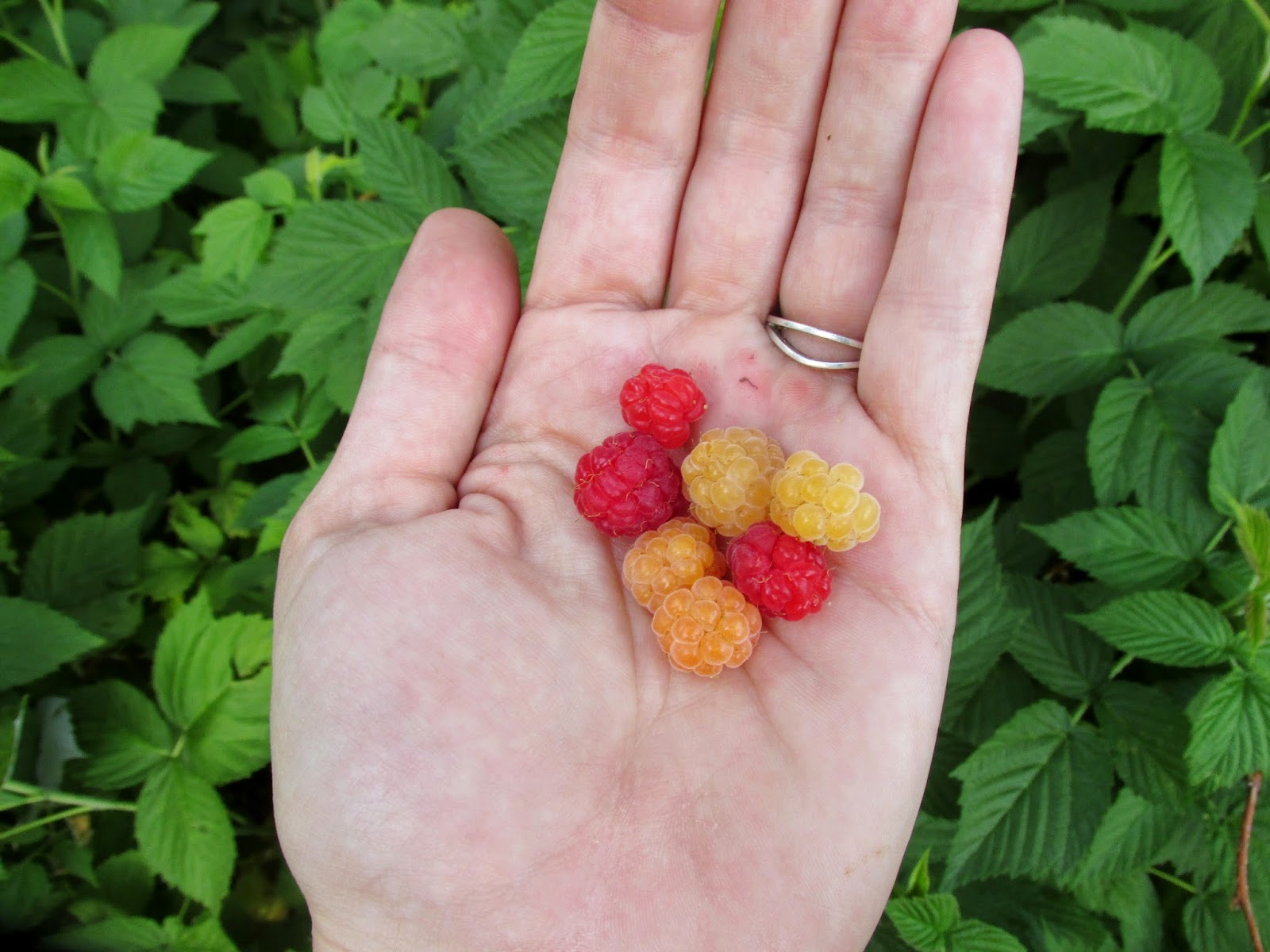 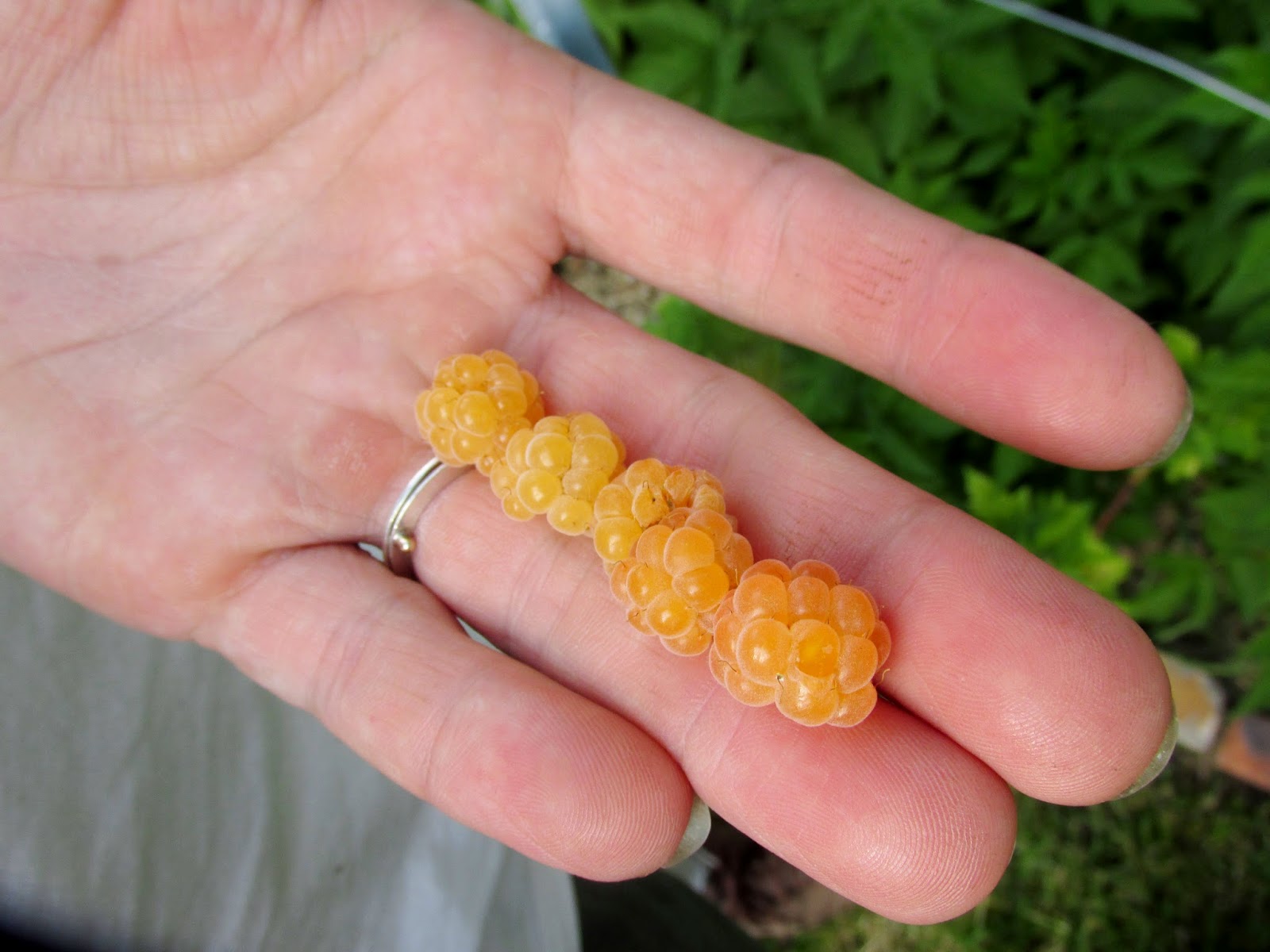 The tomato plants are certainly doing better than last year's wimpy, dismal little seedlings.  We've got high hopes for them.  We barely managed to get the seedlings in the ground, I have to say.  They'd been waiting for transplant for weeks, but just kept getting postponed.  Ultimatiely they were starting to yellow and look sad and we forced ourselves to make time to get them in the ground.  The seeds took so well this year in the seedling nursery that it would have been a shame to let them go south at that stage of the game.  So, tired, hot, and not really in the mood for gardening we planted them at last in their beds.  They look much, much happier now.  The first of the cherry tomatoes are ripe, but the full-sized ones have a ways to go yet. 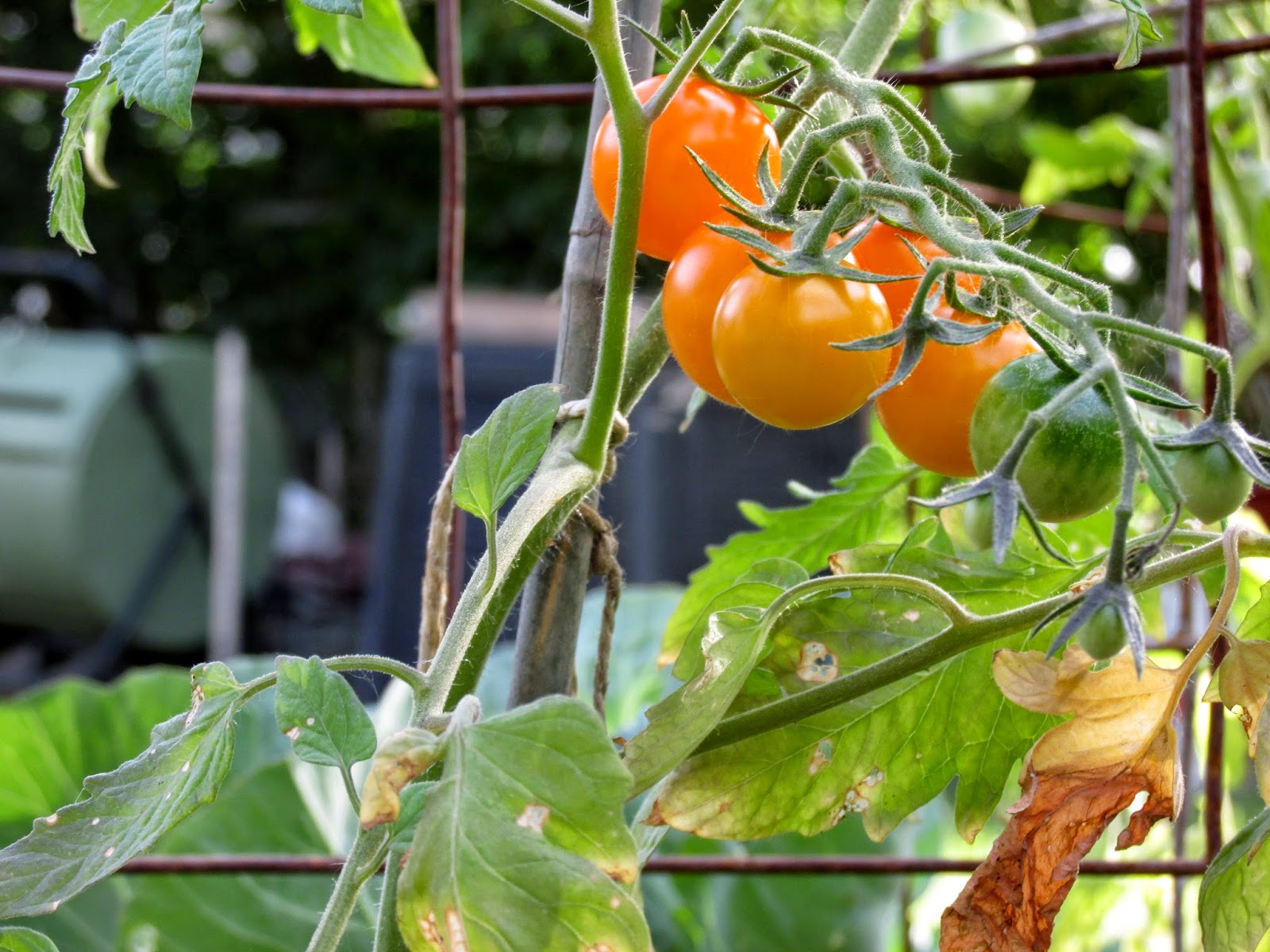 We're taking another stab at fennel this year, too.  Last year was our first attempt, but they pretty much shriveled up and died.  I cannot really remember if we figured out why.  This year, however, is going great.  The fennel are all making nice bulbs and we're thinking they're about right for eating here soon.  Yum.  I am super excited to find out how scrumptious a really, really fresh fennel bulb is. 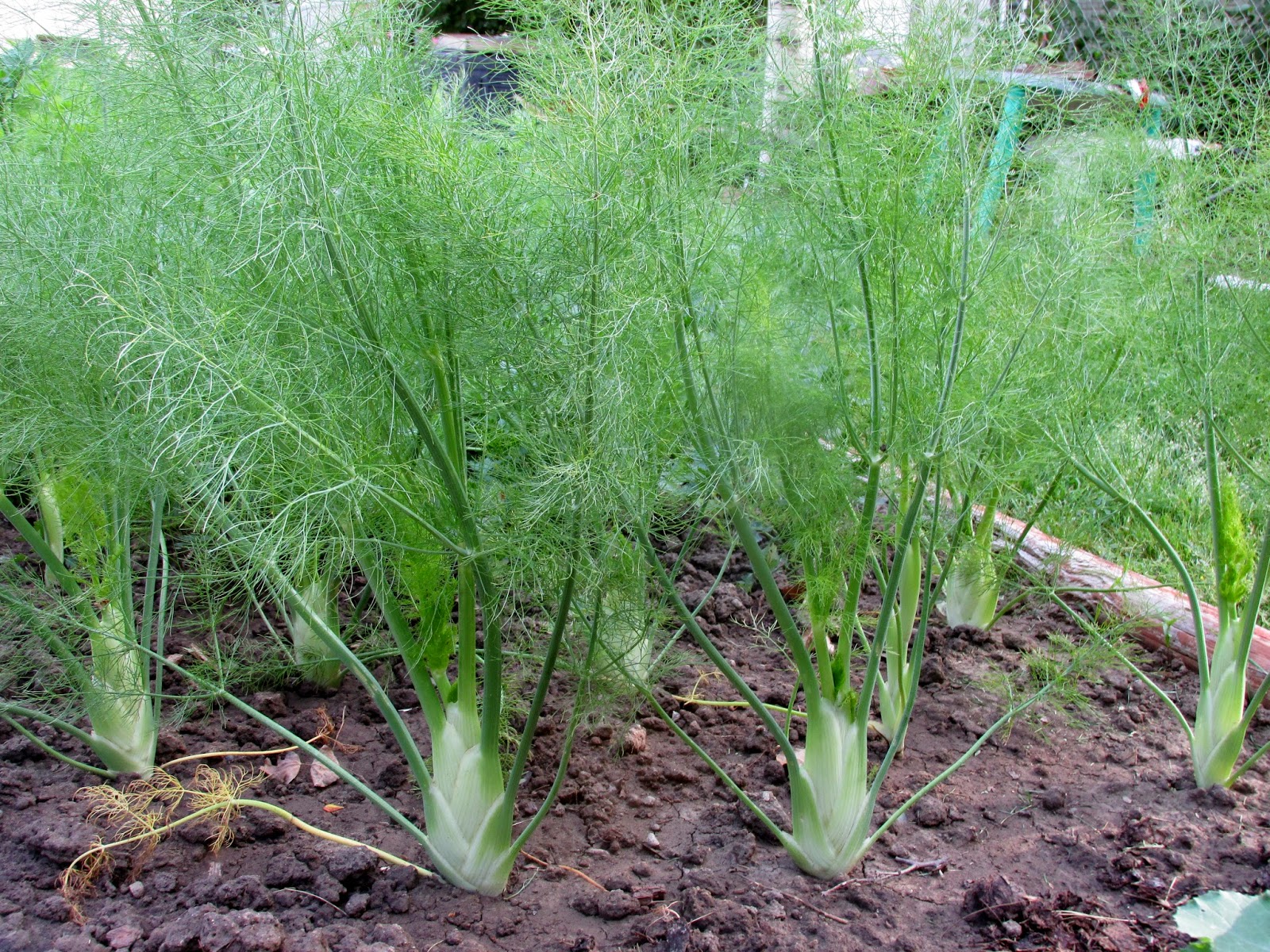 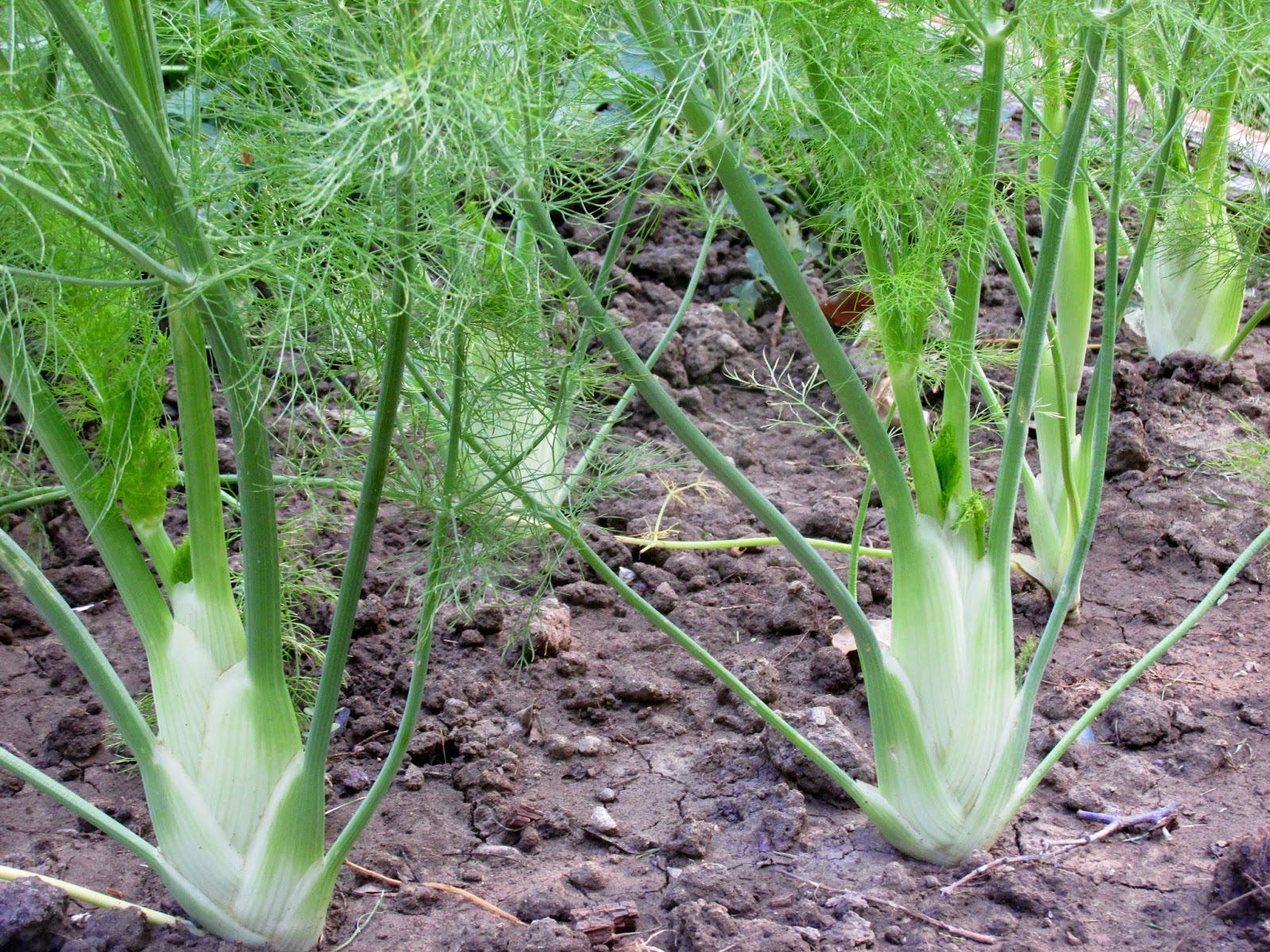 And of course, while all the veggies are growing the flowers are, too.  I think clematis is just gorgeous.  So many lovely, climbing, pink blossoms. 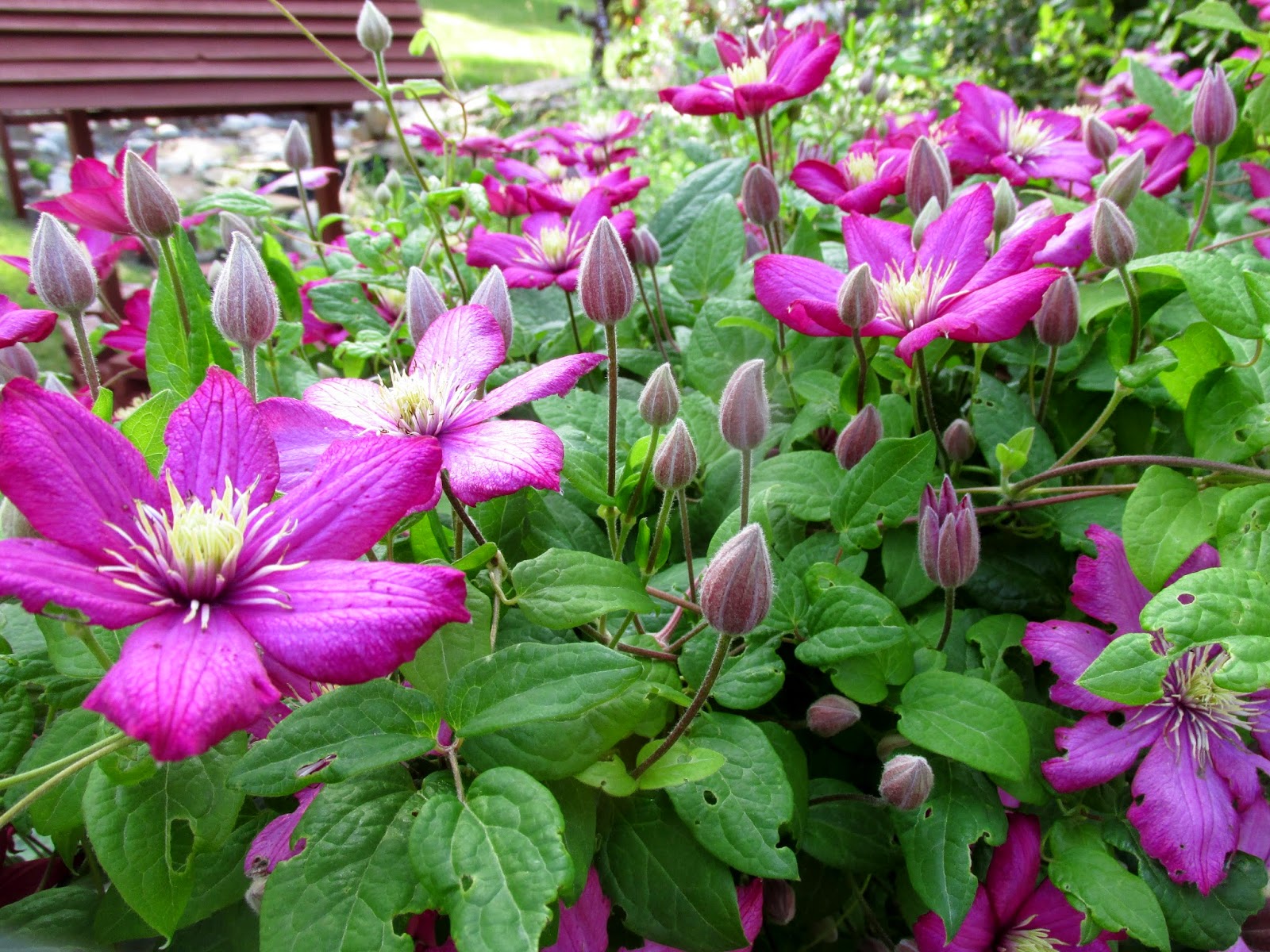 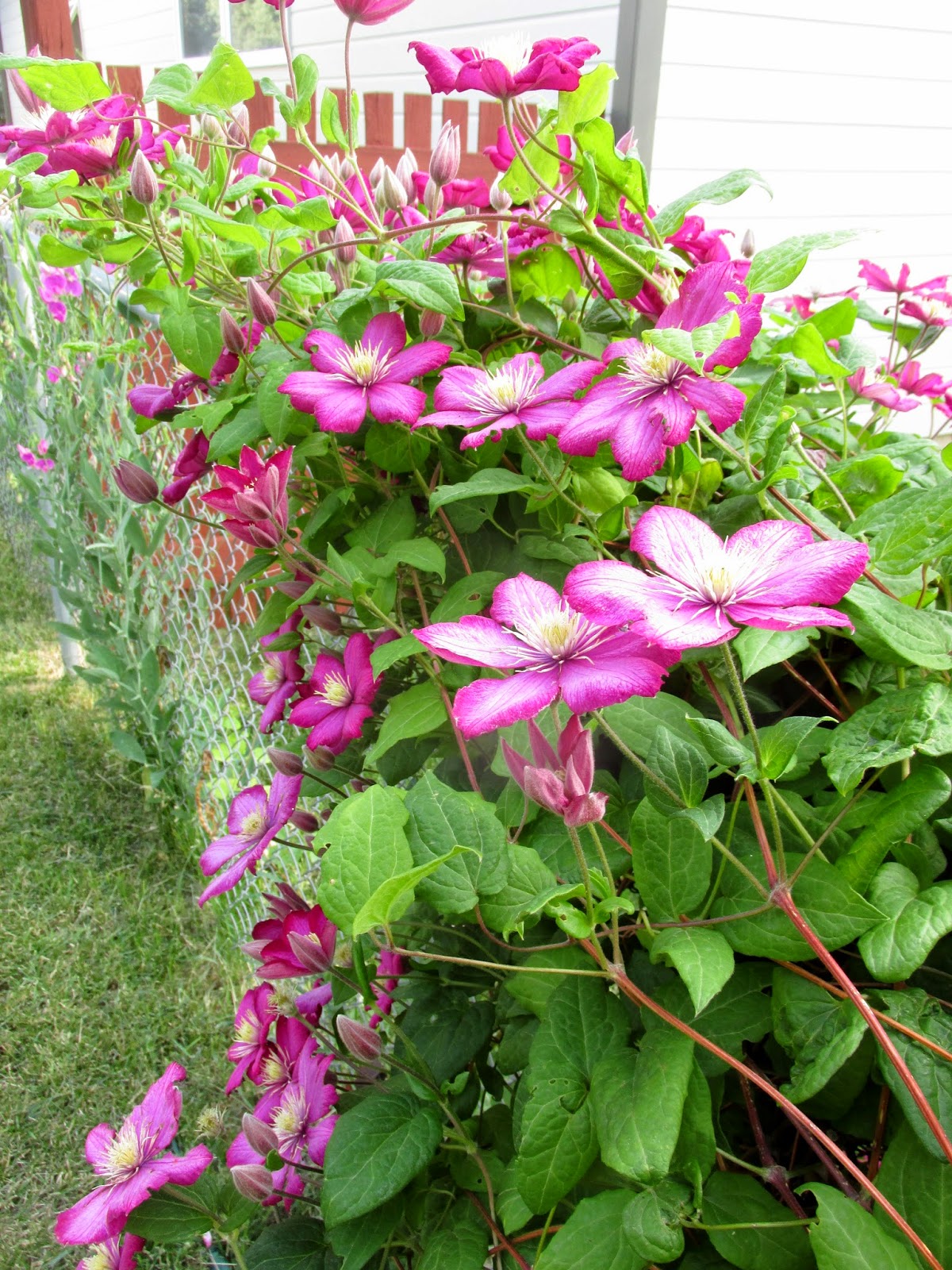 And that is the garden, at the moment.
By BLD in MT