I am most certainly a person tied to the plains, the mountains, the north country.  I've seen the ocean.  I've seen the desert, but my encounters have been quite brief and limited.  So, the first leg of our trip was like a sojourn to another country.  Southern California was, to me, a tropical paradise the likes of which I've never seen.  There are so many tan people (my brother-in-law is one of them!) and palm trees and so much sand.  The beach can be a daily occurrence.  It was remarkable.  I quite enjoyed it.  Swimming in the ocean was an especially grand experience.  I'd swam off the cold rocky coast of Oregon once.  It was nothing like this was.  But, I am getting ahead of myself.
Matt and I started birding pretty much the moment we woke up.  We could hear them calling outside and from Adam's deck soon spotted two new-to-use bird species--Nuttall's woodpecker and Cassin's Kingbird--in addition to the more common mourning doves, Eurasian collared doves, and crows.  There were also a few more of those black pheobes we'd seen the day before.
After breakfast we strolled down to the Oceanside Pier which is just blocks from Adam's place.  I've read that this pier is the longest wooden pier on the west coast.  We walked the length--nearly 2,000 feet--taking in the ocean views and being distracted every few feet by birds which were abundant.  There were many western grebes, a few horned grebes, double crested and Brandt's cormorants, brewer's blackbirds, common grackles, as well as gulls and terns we were not able to properly identify.  We saw a gull with one foot scavenging food dropped by humans.  We saw a cormorant tangled in fishing line, which was pretty horrible--though it was ultimately cut loose.   There were lots of men and women fishing from the pier.  There were quite a few people surfing nearby, too.  We've not had the chance to watch much surfing.  Its impressive. 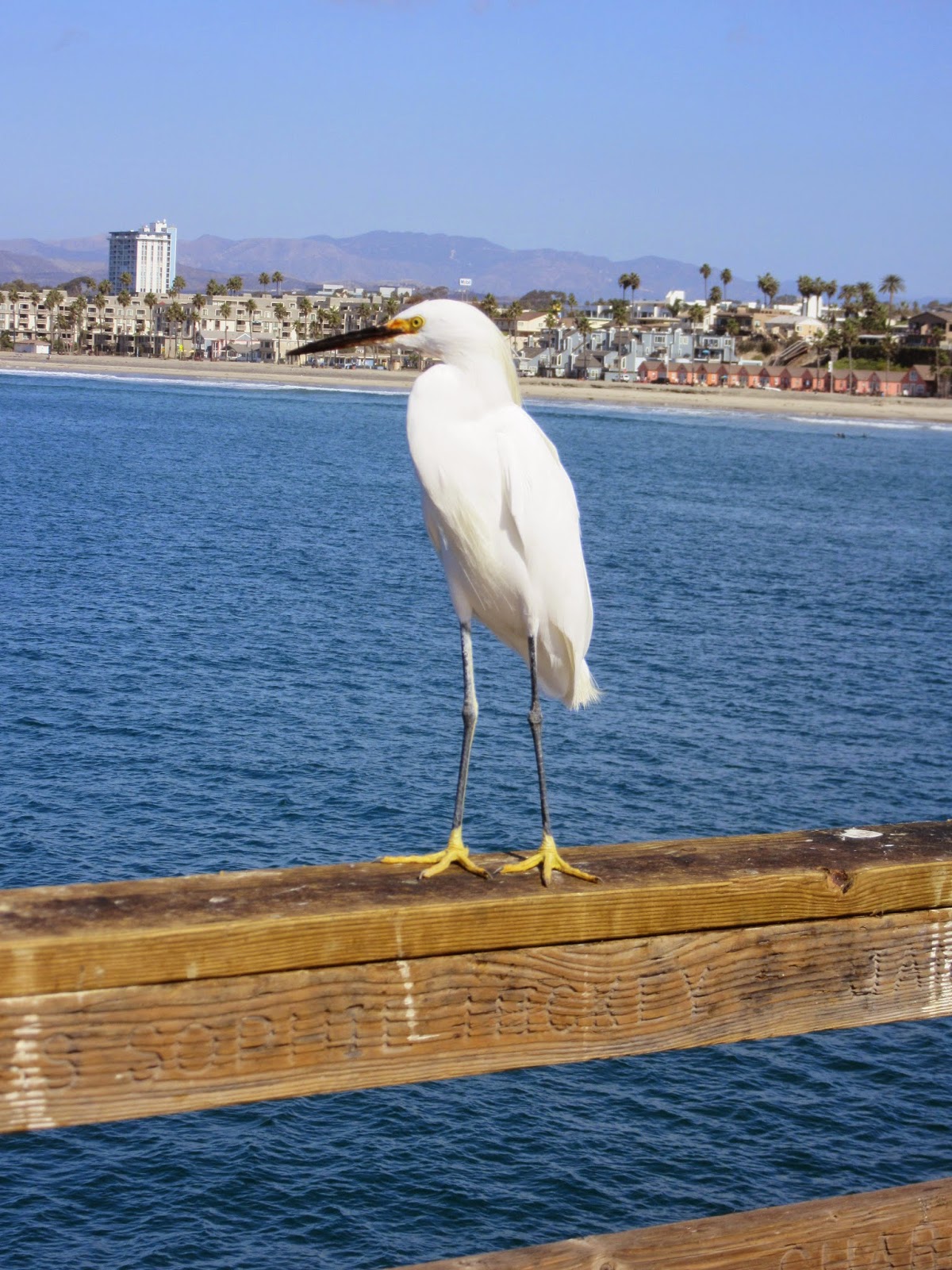 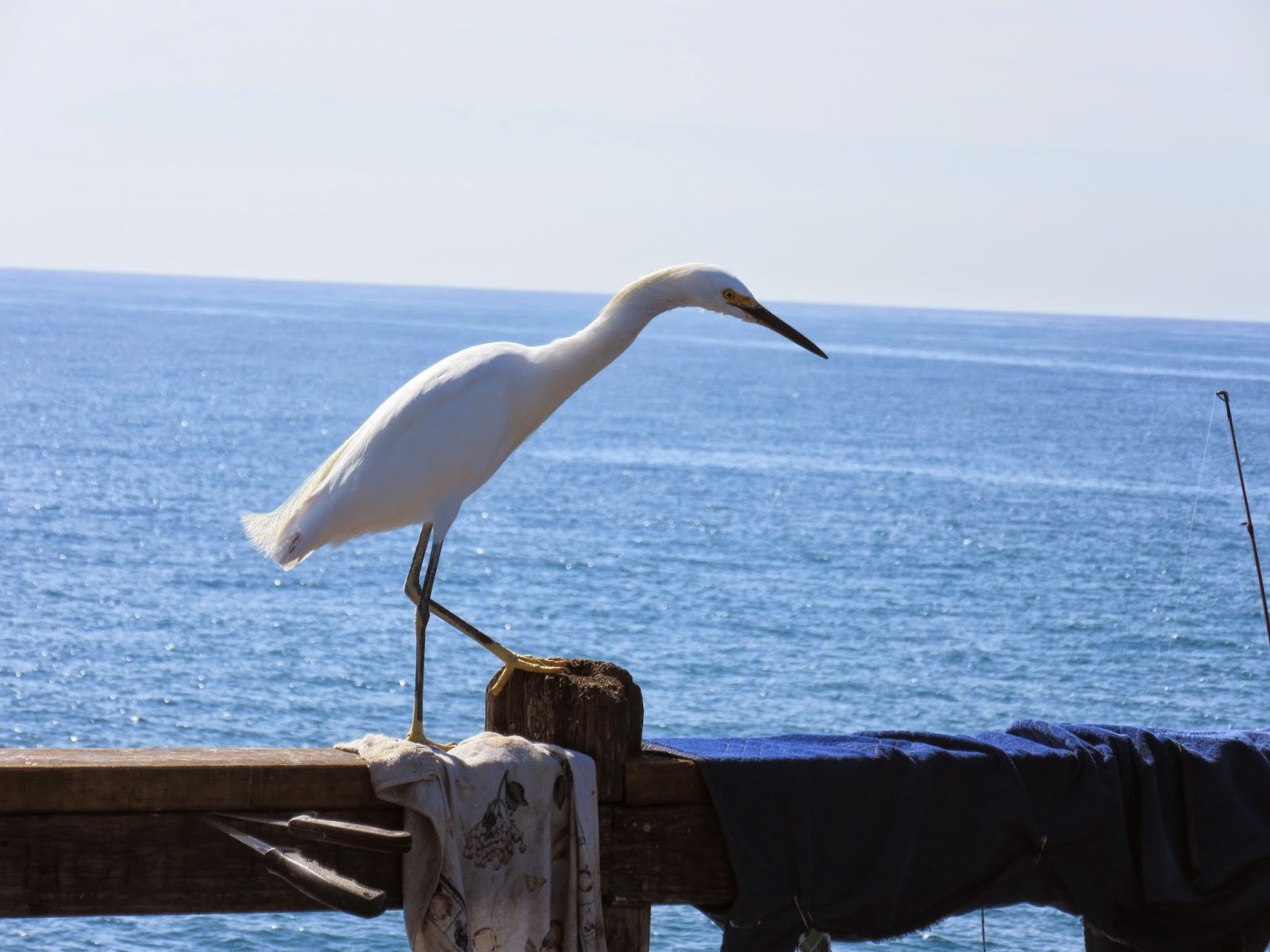 We walked back to Adam's and he got busy running errands for his impending move back to Montana so Matt and I put on our suits and went back to the beach.  The ocean wasn't exactly warm, but it took no time at all to get used to.  Playing in the waves was endless fun--diving over them, under them, through them, riding them, tumbling in them.  It sure wore us out though, fighting the waves ever pushing and pulling in and out to sea!  Matt went back to the beach to nap on the sand, but I kept swimming for a good while longer and gathered some shells in the surf.  I'd also brought my kite along from Montana.  I've always read that beaches make for great flying because they are wide and open with a constant wind coming in off the ocean.  My flying experience certainly didn't disappoint!  I made one flight that lasted probably 30-45 minutes.  I had to stop because I could tell I was getting sunburned!  It was wonderful to fly with the waves lapping around my ankles.
After returning to Adam's we made a trip to the grocery store.  It was weird flying in this regard.  As frugal, vegan-types we typically pack our own food.  That wasn't really possible while flying.  So, Adam had a cooler for us and we had to hit up the grocery.  We had dinner, played some Yahtzee and Scrabble, took a stroll in Adam's neighborhood, and then returned to the beach for the third time of the day to watch the sunset over the ocean. 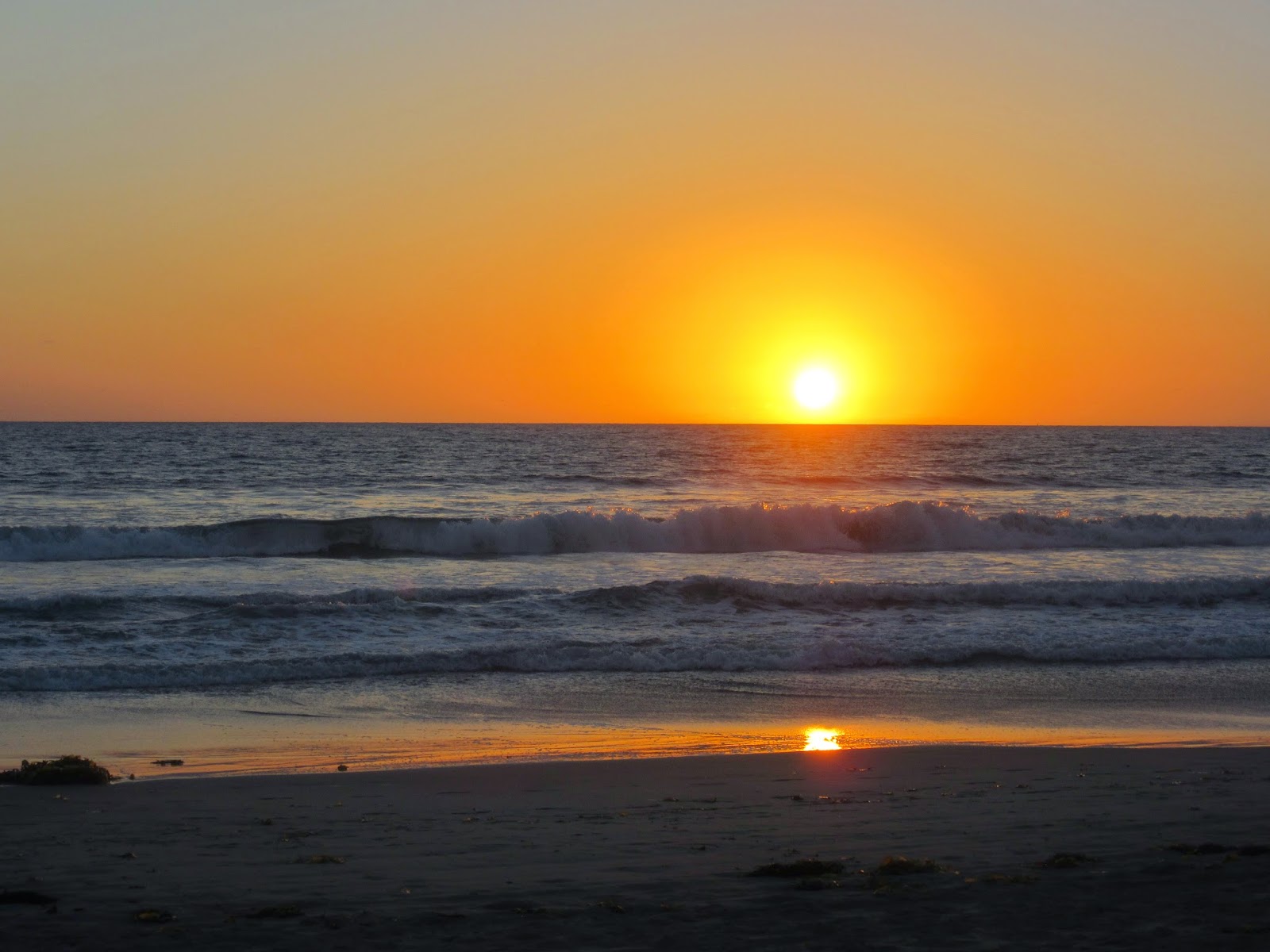 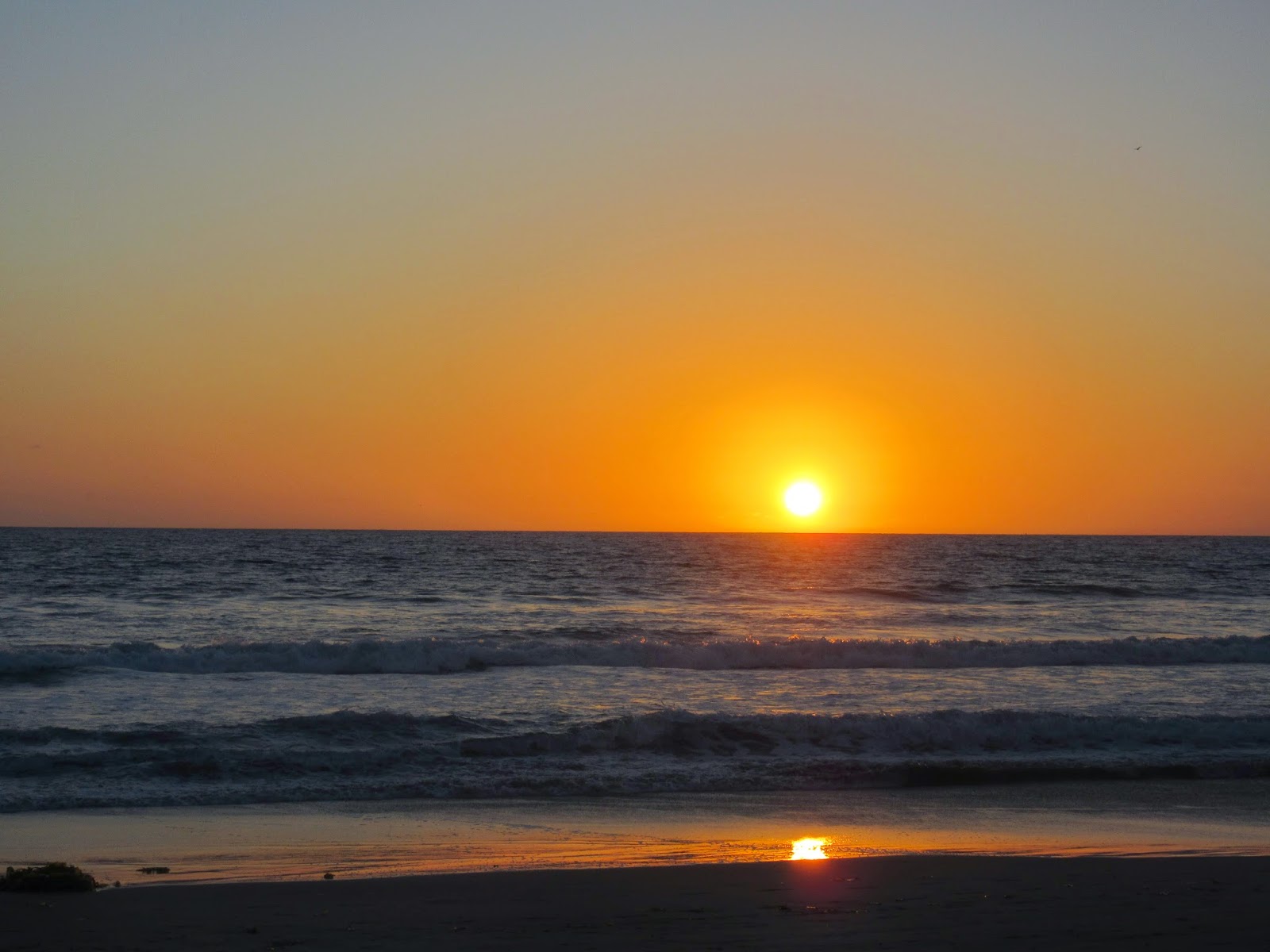 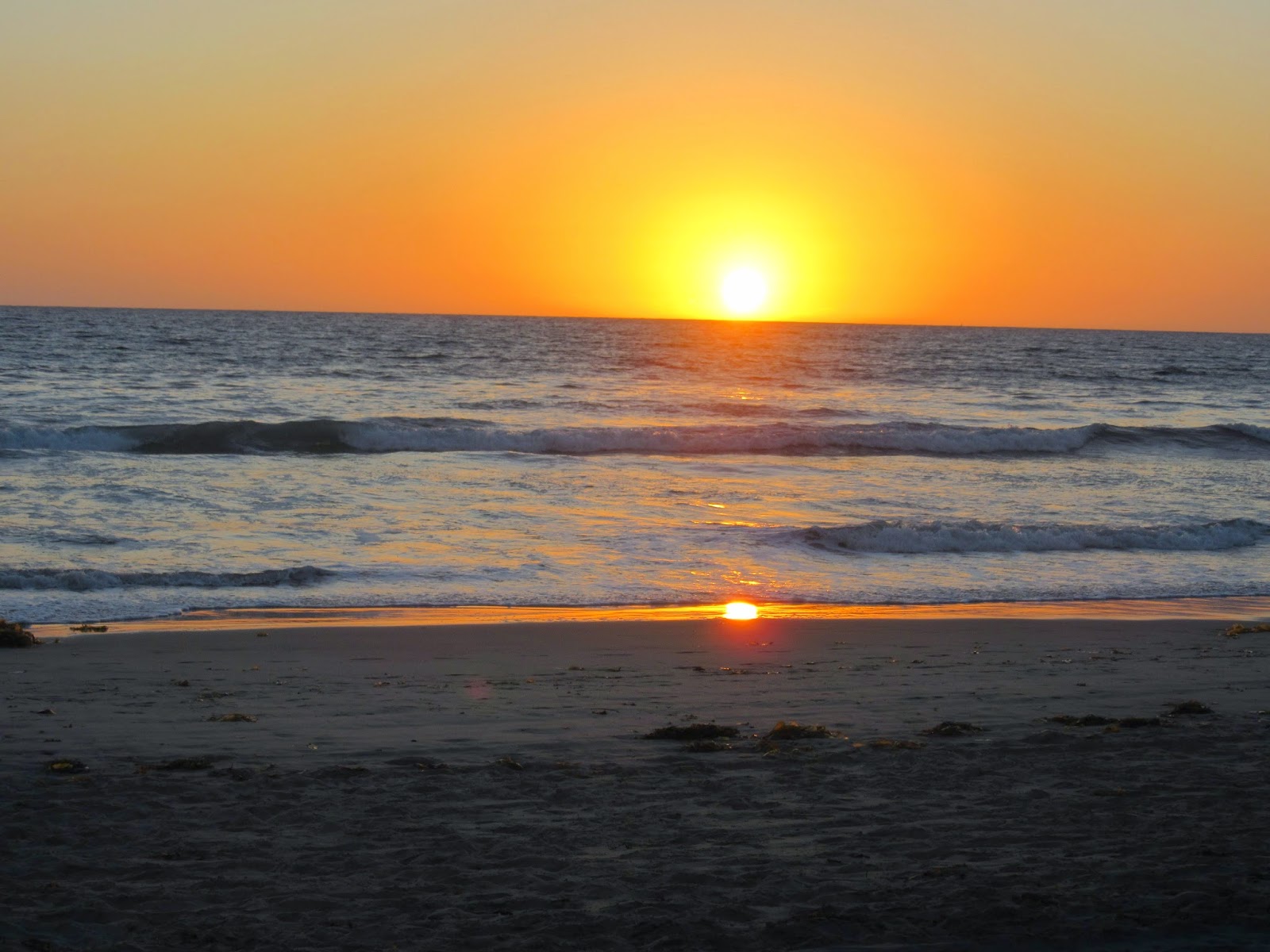 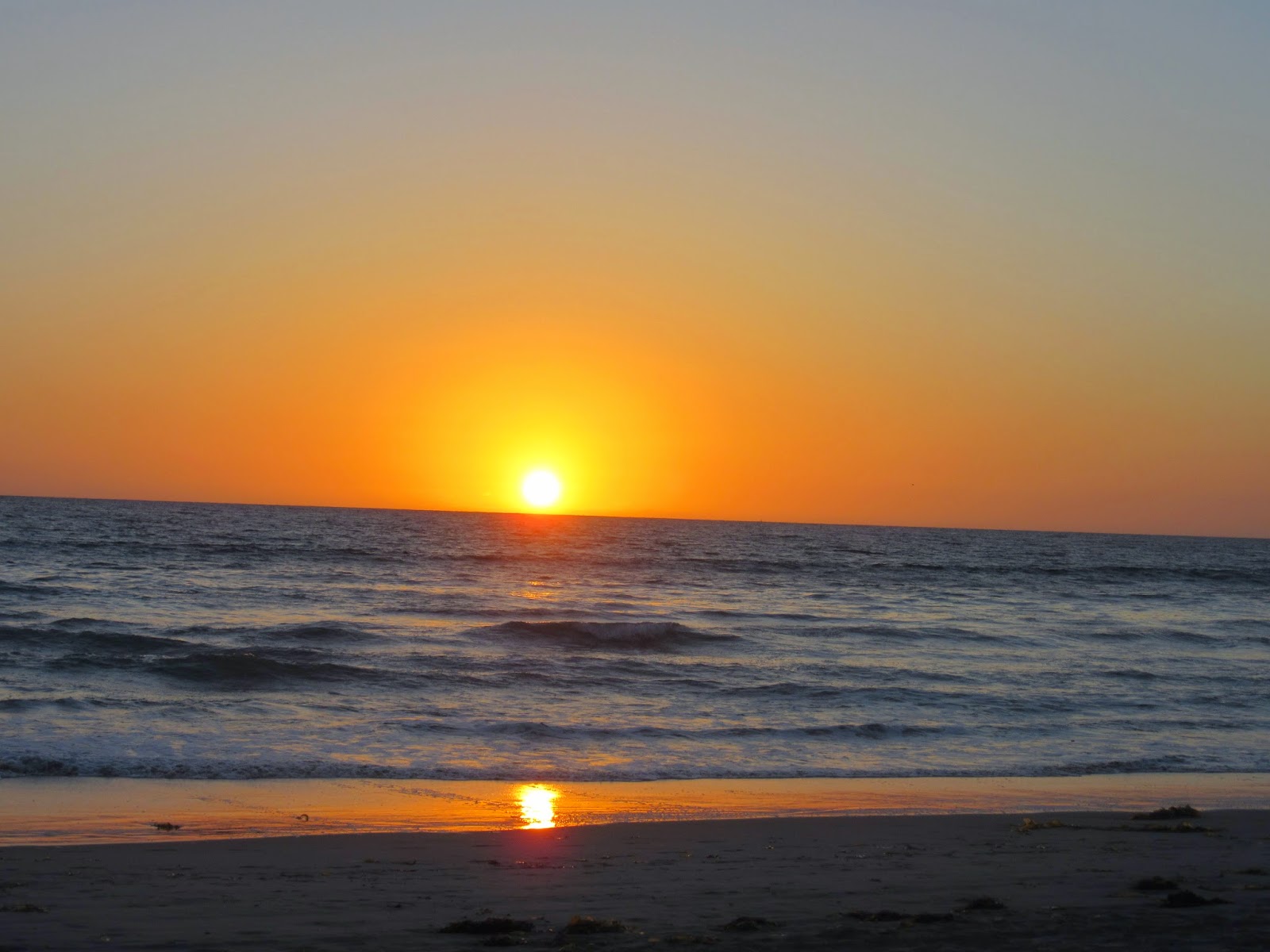 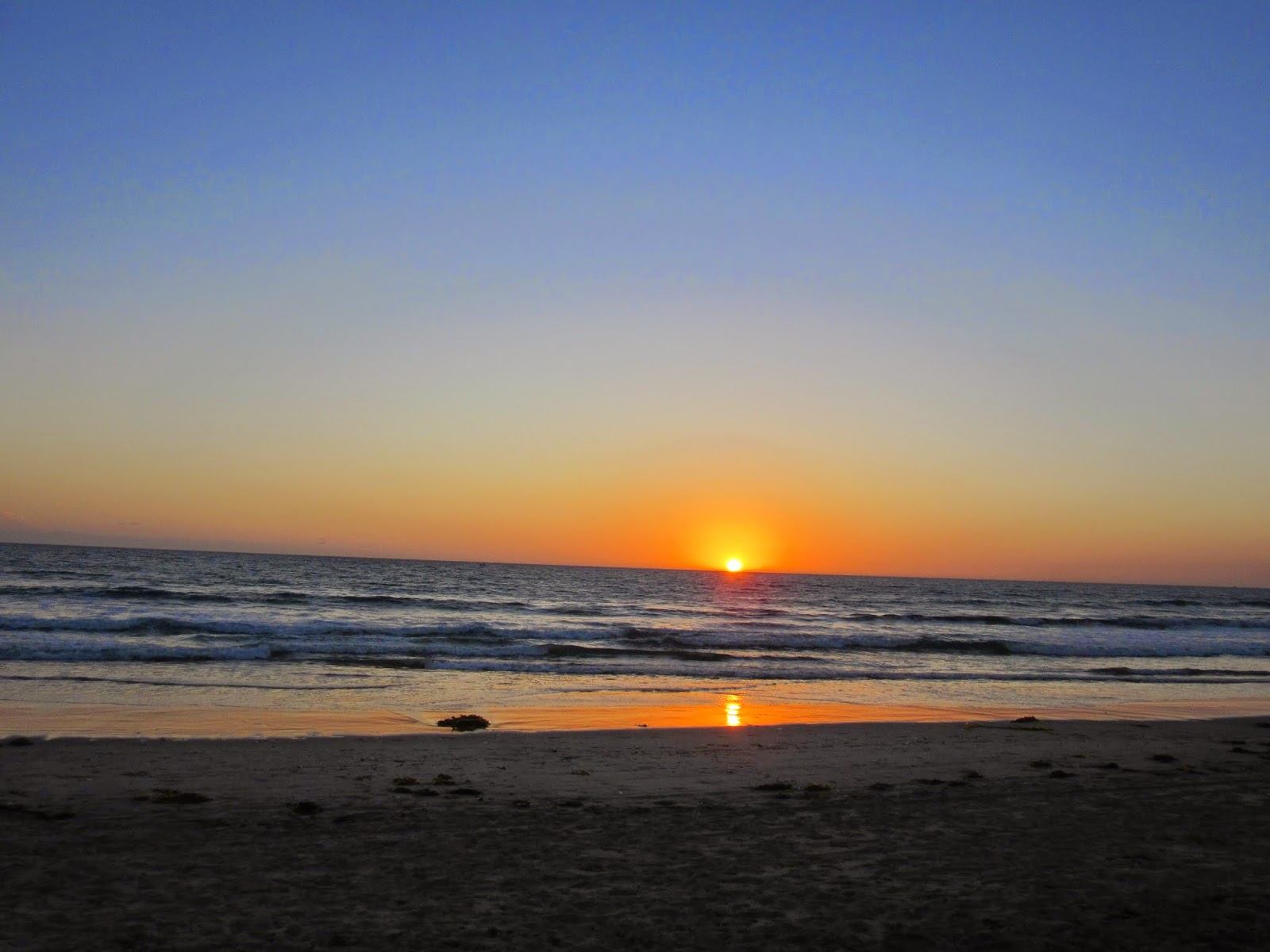 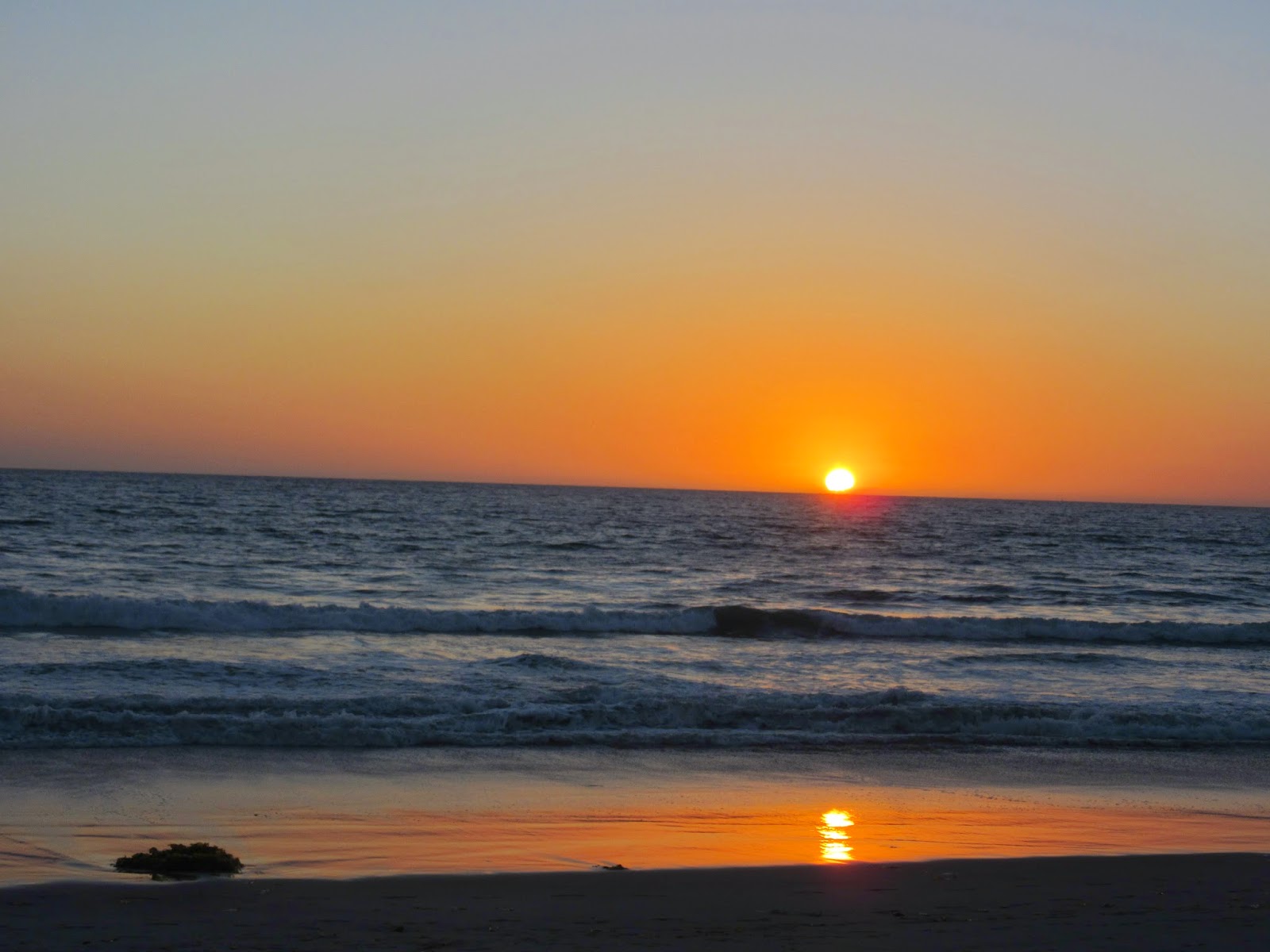 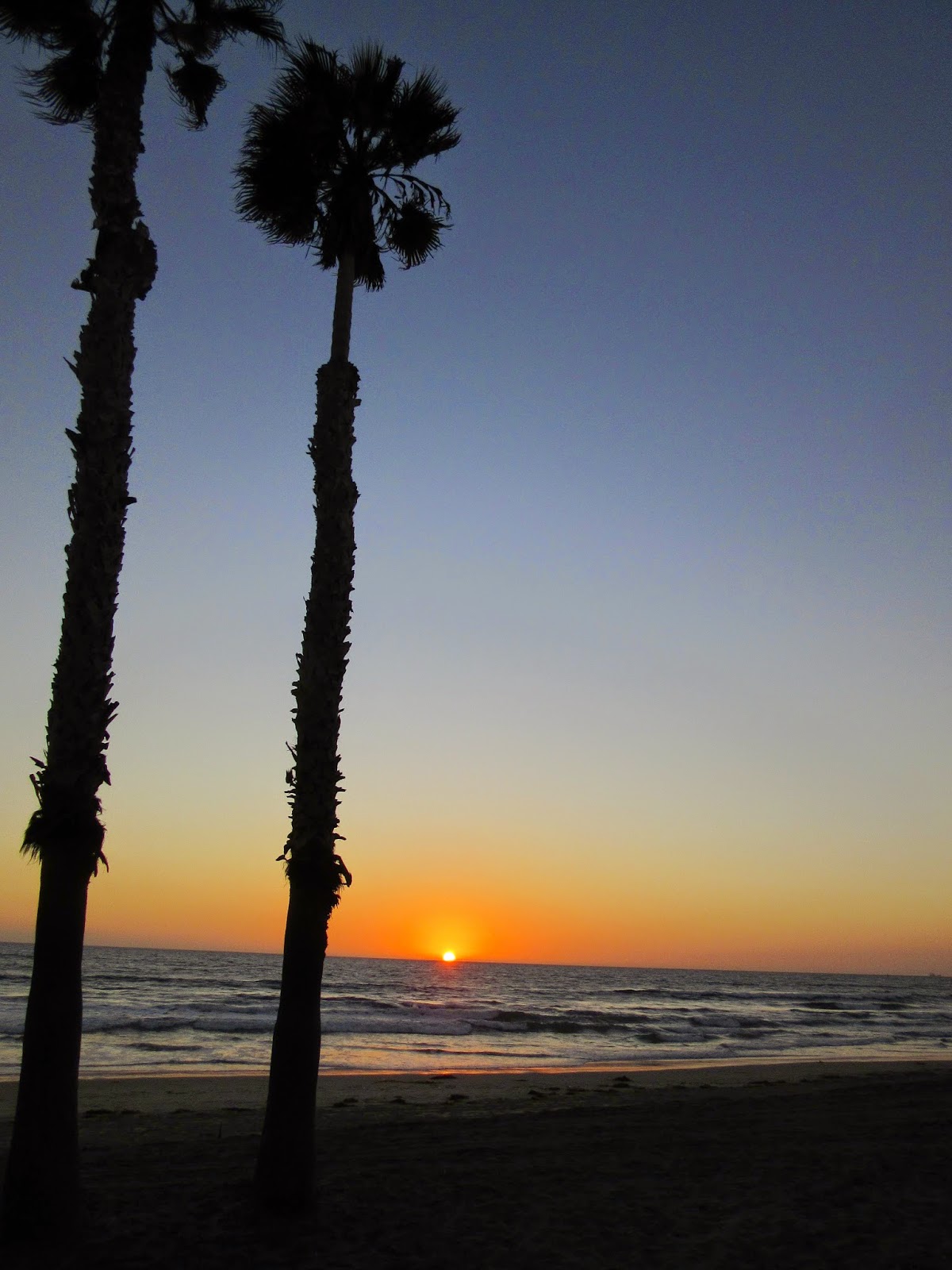 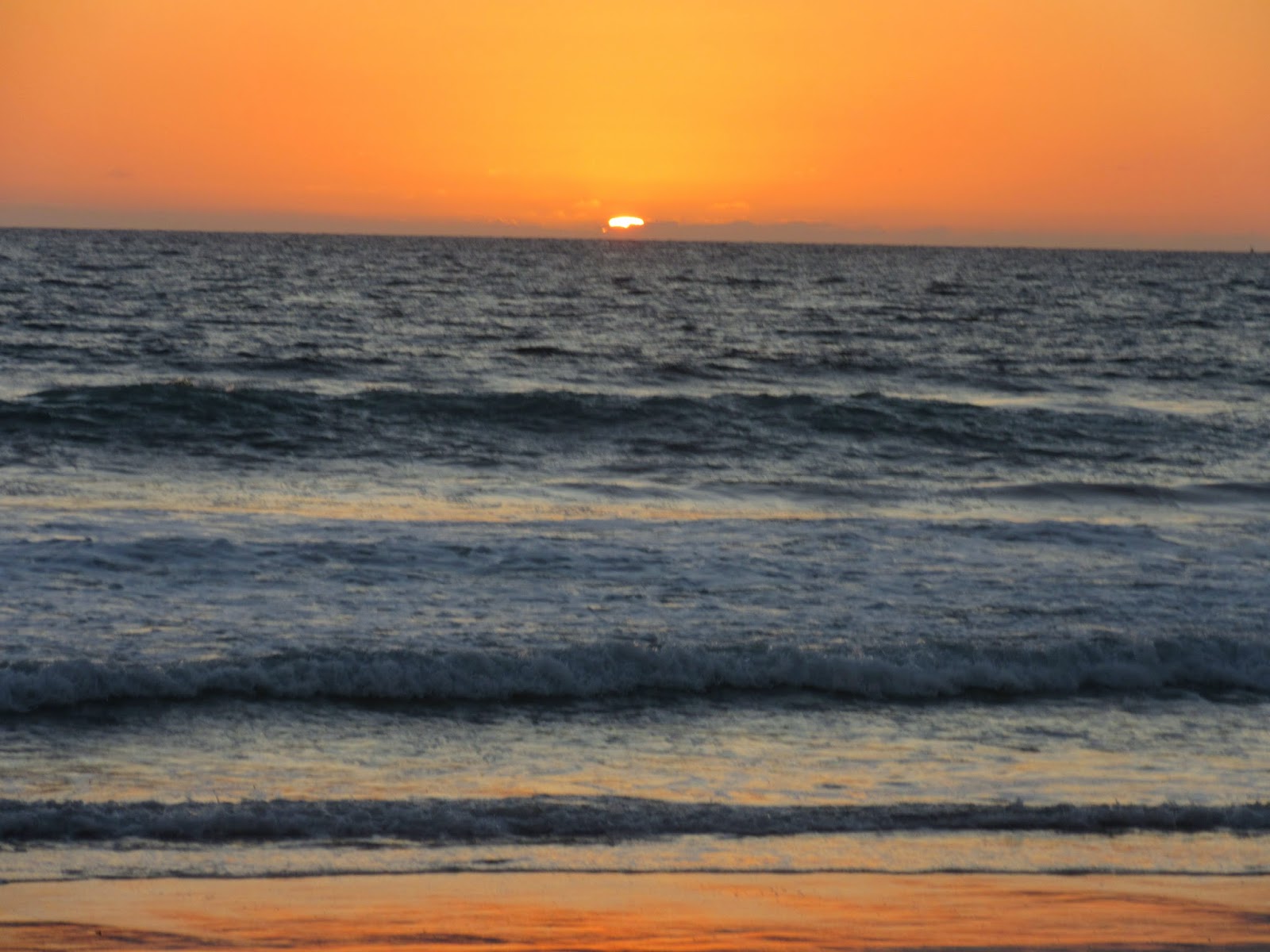 The fading light on the palm trees caught my attention greatly.  The clouds behind the pier were softly backlit in rose.  Oh, those sunsets over the ocean!  A glorious sight I've never thought to behold.  It made me think.  The rare or unusual is always remarkable.  This making an effort to watch the sunset over the ocean made me ponder that perhaps I should expend more effort to watch it set over my city.  For me its like if I catch it, good.  If not, oh well.  These ocean sunset journeys made me think about all that... 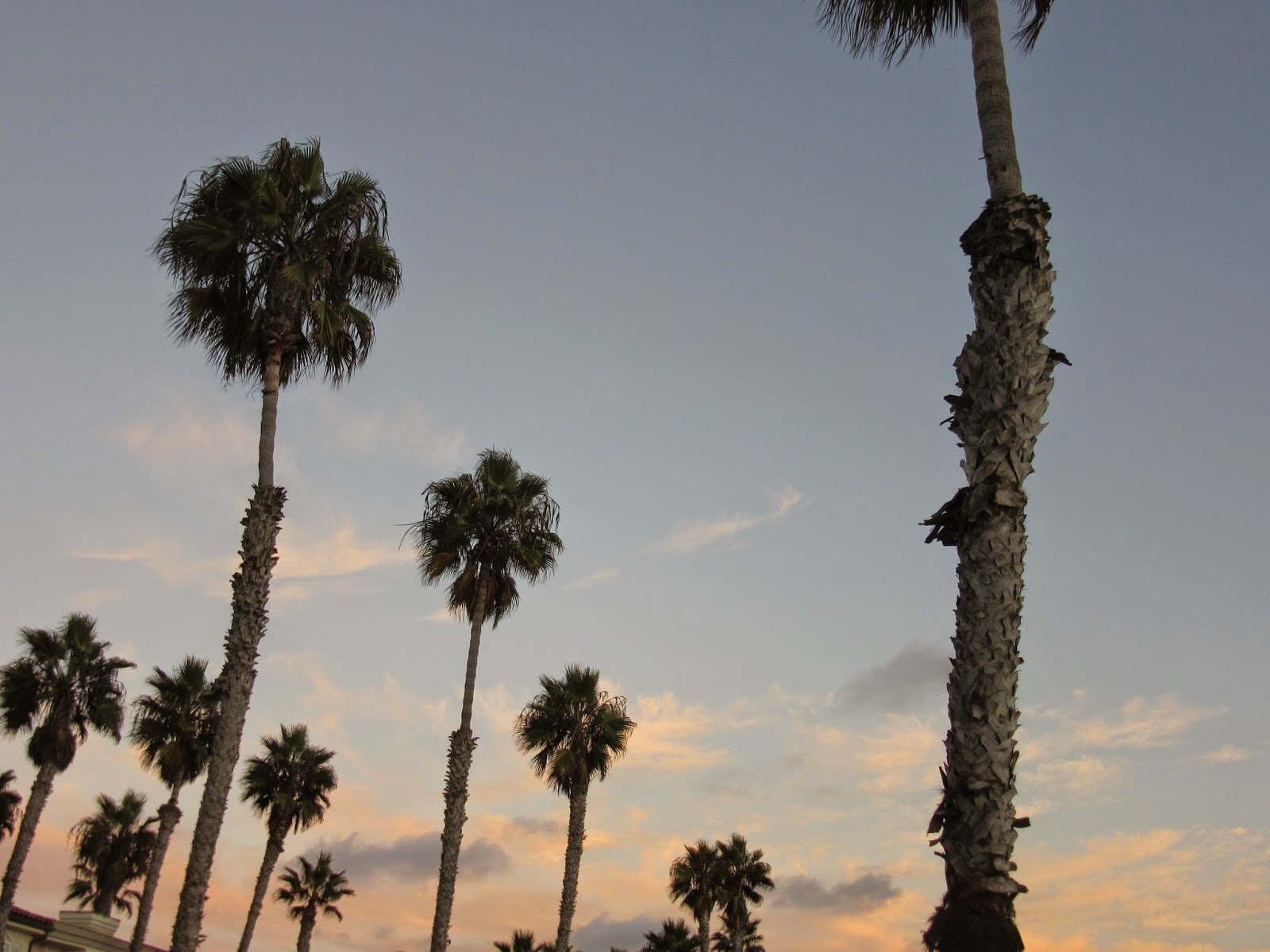 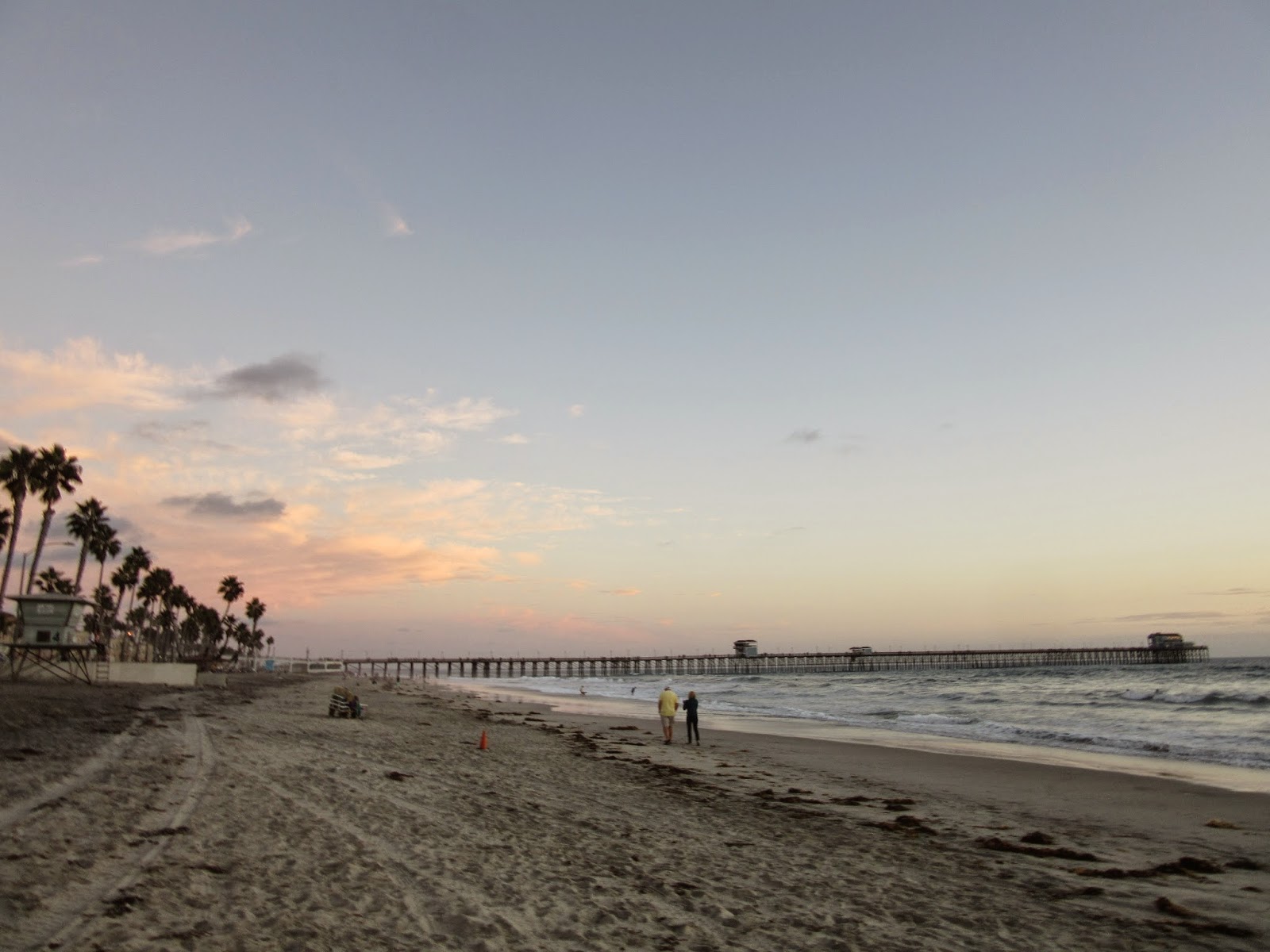 "California, preaching on the burning shore.
California, I'll be knocking on that golden door.
Like an angel standing in a shaft of light,
Rising up to paradise I know I'm going to shine."
-Estimated Prophet by the Grateful Dead, words by John Barlow
By BLD in MT